2 questions, foremost is why am I not finding the toy surprise in my peaches?

The topic my sound a little funny like I bought a box of crackerjacks and am surprised that I didn’t find the toy surprise that is suppose to be inside it. But this is similar to that in which where I have a peach tree that first fruited last year with like 16 peaches on it with no insect damage. This year I have many more peaches, sprayed after petal fall on May 17(Am located in Southeastern Connecticut) and then again on June 16. In between sprays closer to June 16 I noticed insect hits on the peaches in varying degrees, some which got hit really bad like 4 to 6 times on some with clear gel oozing out of the hits. I have cut open about 16 peaches this week(ate some and made a peach pie today) and have yet to find a pc or ofm worm in any of them, even the ones that got hit the worst! Does anyone have any ideas? For the record I have been spraying them with bonide fruit tree guard and for those that are newer here, that is NOT the same as their fruit tree spray which is much cheaper.

My second question which is much less important is this peach tree that I bought from Millers thst was tagged as Elberta certainly is not an Elberta. My best guess is that it is a Reliance tree because of fruit color, thick skin and ripening time. I’m posting what they had for sale at the time and pics of my peach and would like to know what others think it is? Fruit starts ripening this week and lasts into the end of the month. 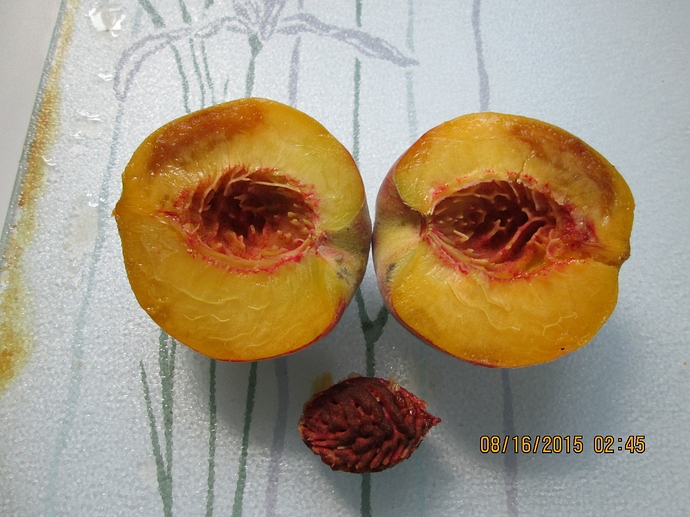 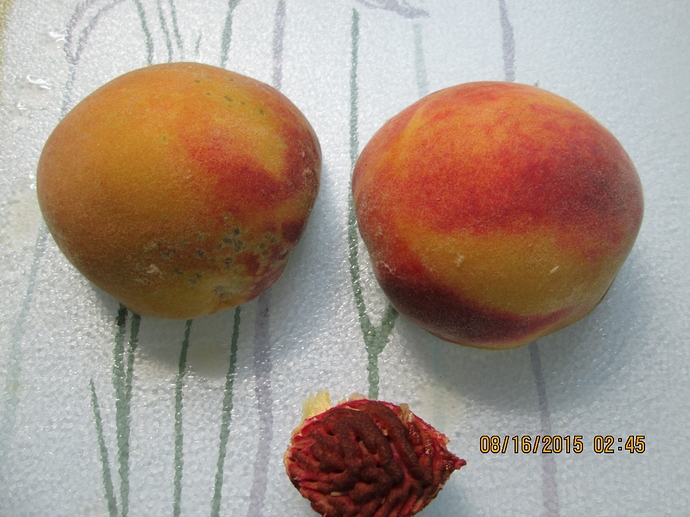 Thanks to everyone that reply’s to this post for any help!

PC damage was not bad in your (our) region this season and peaches are not their first choice because of their fuzz. However tarnished plant bugs and stinkbugs feed on them and cause bleeding and small scars and sometimes with stinkbugs even an off bitter taste.

Your peach is similar to reliance but I think reliance would have more red in the flesh. Why suggest that instead of the most common of all peaches- redhaven?

On some varieties they will ooze after a rain due to structural flaws in the peach and not due to any bug. Indian Free and Foster are the worst in that regard for me, but many varieties do it a bit. Next year cut open right when you see ooze on a few peaches to determine the cause.

My second question which is much less important is this peach tree that I bought from Millers thst was tagged as Elberta certainly is not an Elberta. My best guess is that it is a Reliance tree because of fruit color, thick skin and ripening time. I’m posting what they had for sale at the time and pics of my peach and would like to know what others think it is?

I’ve found trying to discover the variety of a mystery peach can be pretty tough. You are right that ripening time is a pretty good clue. Also the showiness of the blooms helps, as well as the type of leaf glands. If it ripens around Redhaven, it could be Reliance. However it looks like the peach in the photo was picked early, is that right? If so, it adds more uncertainty. Reliance is smaller and colors poorly (like the peach in your photo) so it could be Reliance.

Doesn’t Plum Curculio cause fruit to drop way before ripening? That has been my experience.

PC adults feed on the outside of the fruit and cause scarring, the crescent wounds are from egg insertions. In apples the larva are usually crushed before escaping the apple- some apples that have or had larva drop but some remain on the tree, deformed and incapable of long storage. Even with plums, some ripen with worms in them- they are first to ripen. Often some of the plums will have no worms in them but there is tunneling to the seed cavity and the fruit is worthless, although it sticks to the tree until being ripe. In a low spray orchard be wary of earliest ripening plums.

@alan OK, thanks for the heads-up. I’ve only seen them in unripe plums that fall off the tree early. I’ve never seen them in peaches, which might be because of the fuzz. It could be my ignorance with apples. I usually slice all apples and throw out whatever looks like a bad spot, not really caring what caused it. The only time I don’t slice apples is with cider pressing, in which case occasional grubs are too be expected (most likely with commercial processing as well). It could also be that I don’t see many due to variety preference. Since I’m expanding on varieties, maybe I will have more issues in the near future.

1)I don’t think it is reliance. My reliance had fully ripe fall out the tree last week and I am in zone 5. If your peach just start to ripe, it is late for reliance.

Thanks for the help everyone. I read somewhere that the reliance peach has showy blossoms when it is blooming. Is this true or not? My tree as far as I am concerned doesn’t have showy blossoms. This wouldn’t be the first time that I have found fruit tree descriptions to be incorrect! Ex. in Backyard Fruit Production by David Schlabach Third Edition on pg. 114 it shows a table of plums and says that Shiro is a red japanese plum. lol

Here’s a pic of my tree back in early May with blooms, sorry no up close pics.
Mystery Peach 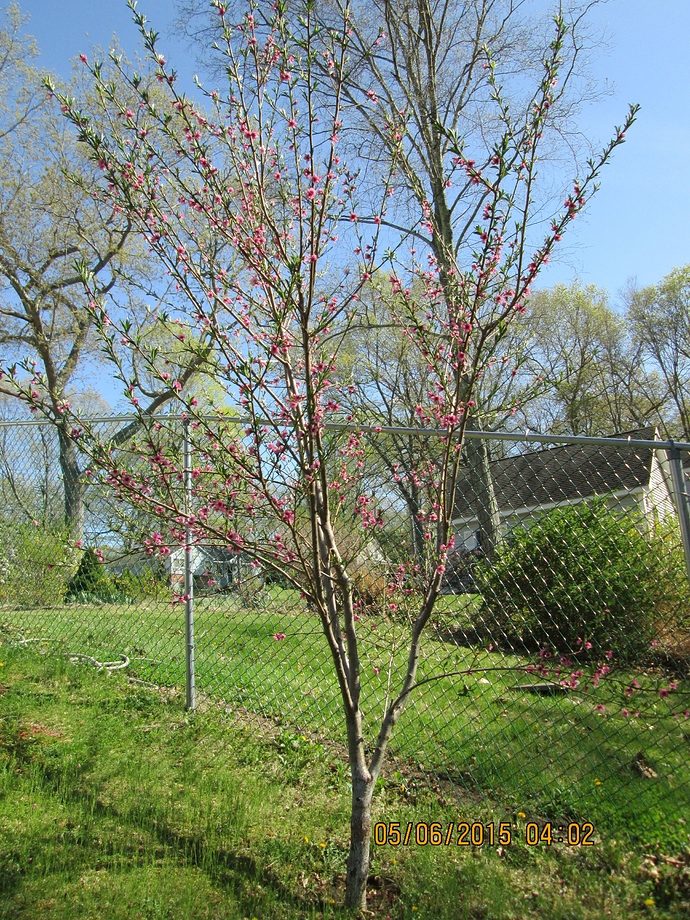 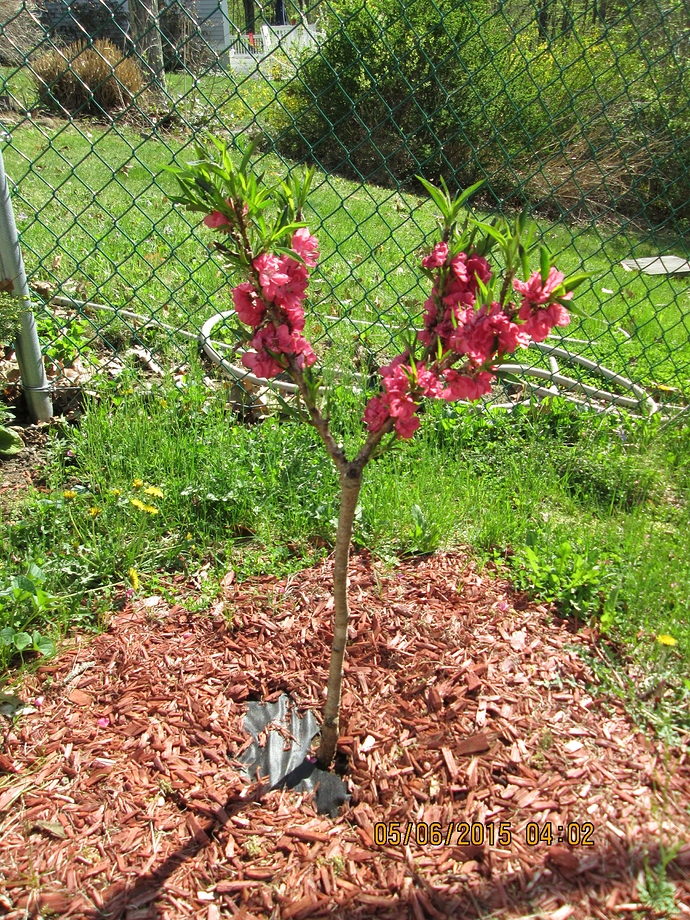 This is the picture of my reliance in full bloom. 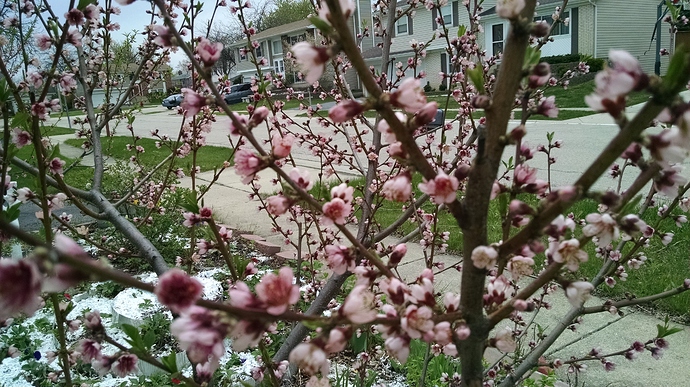 Thanks for the pic Annie! Looks like my blossoms are a darker shade of pink then yours and the blossoms themselves look different. I’m going to go with Alan’s suggestion that they are Redhaven.