I got about a quart of strawberries today. The Earliglow and Jewell are starting to come in decently, plus I picked a few Flavor Fest. The FF berries are much larger. Earliglow is the tastiest. I’d go with FF over EG if I had to choose only one.

I’m getting a gallon or so every day now, mostly Earliglow. Got to agree - Earliglow’s flavor is superior.

I have a few Yambu coming ripe now - beautiful, larger berries, but on the bland side for taste.

Something’s pilfering my Flavorfest strawbs, I went out today and only found maybe half a dozen. The flavor is okay, seems a bit washed out, prob because of all the rains.

The Earliglow are most prolific, but most of the berries are no bigger than thumbnail sized. Found a few Jewel, the ones I did try tasted pretty good.

The weeds are taking over again, it’s a losing battle keeping it under control. After the production runs out, I’m going to renovate the patch, never have done it before, may be why they’re not producing as much as they should.

My Seascape I planted last month are blooming some, but I’ve been pinching those off. They’re looking a bit pale green, so I’ll need to give them a dose of fert soon.

Rasps are sending up lots of canes, some are up to 3ft tall now, looks like they have responded well to the fert I gave them last month. Prelude has a few tiny berries on it, others are coming on.

Blackberries are blooming, the first ones appeared to be fried, because of the late freezes, but more are coming on. Triple Crown is awash in blooms.

My Oregon Champion gooseberry has responded well to some fert, it had many small green berries on it, but nothing ripe yet. Jeanne looks good too, but it doesn’t look like it’s set any fruit.

The Sparkle and Mara des Bois strawberries have been rolling in the past week. I found the first few Joan J raspberries today too. 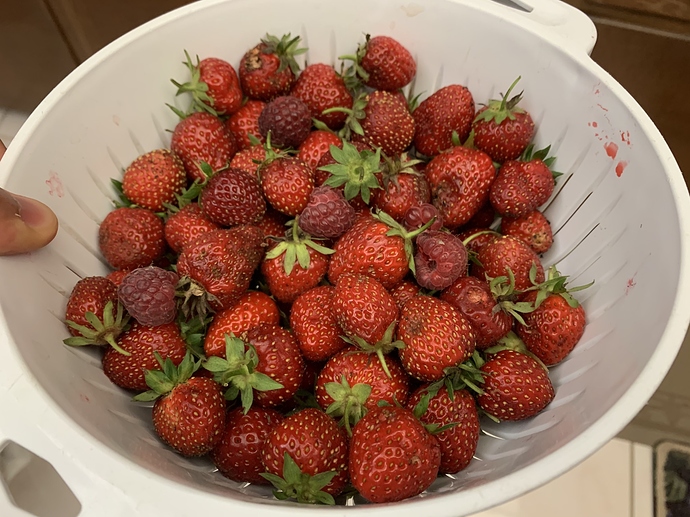 For your Mara des Bois, do they taste bland early on and get better as summer progresses? The first couple I picked were disappointing but have been getting slightly better.

my mara des bois aren’t very tasty. they’re sweet but i find the flavor uninteresting. earliglow and sparkle are still my faves. I’m growing galetta and ac wendy. had a few ac wendy last year and they were very good. should have a full crop this summer of them. galetta has earliglow as one of its parents so i have high hopes for that one.

my jeanne is going to set its first fruit for me this summer. only other gooseberry I’ve ever tried was pixwell and i didn’t care for it. I’m hoping these are better.

My MdB are so so. Better than those hard store bought things, but I prefer Gariguette.

mine are leaf spot magnets so i may replace them next year . sprayed with immnox so hopefully they grow better this year.

My Jeanne is still pretty small, about two feet tall, but it’s put on good growth this year, with several new canes.

My OC is huge, about 4ft tall, and 3ft wide, it has set fruit the last three years. I still don’t know what they really taste like, other than a tart grape. They go from green to purple, so I guess they taste better when they’re darker.

Netted the haskap patch today. It’s late for them, but we’re behind this year.
They are only just starting to show colour but the robins are super interested so it couldn’t wait.

Lots of assorted strawberries are setting fruit but I’m very concerned about how bad the bird pressure will be.

The Saskatoon is just covered in growing berries. Easily 4x the most we’ve ever seen before. I guess I can hope it may distract the birds enough that they’ll leave the sour cherries alone.

Finally a decent harvest. Still Caroline and Double Gold. Fall Gold is slowly turning orange. Needs a week or so 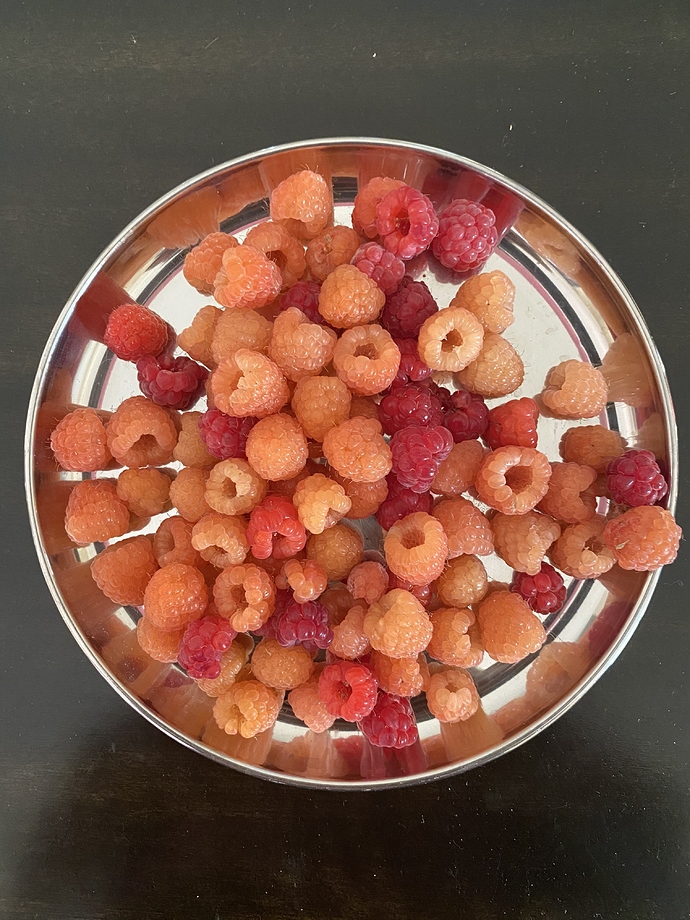 How does Caroline taste for others? To me, it is not the most sweet but has the traditional raspberry sweet/tart flavor. I do plan to keep it as it gives a nice diversity, but I wonder if this is a side effect of my Z9B heat 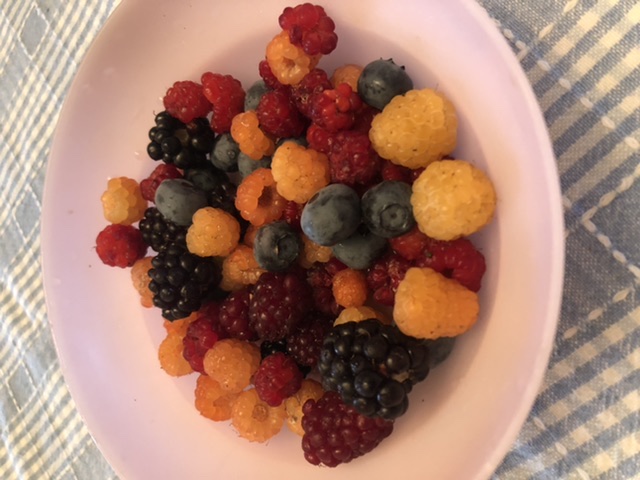 Prelude raspberries are starting to ripen right on schedule. Looks like a very good crop this year. 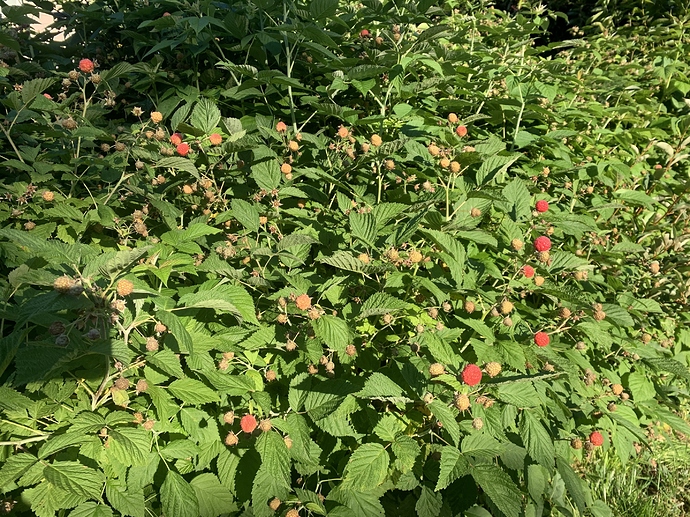 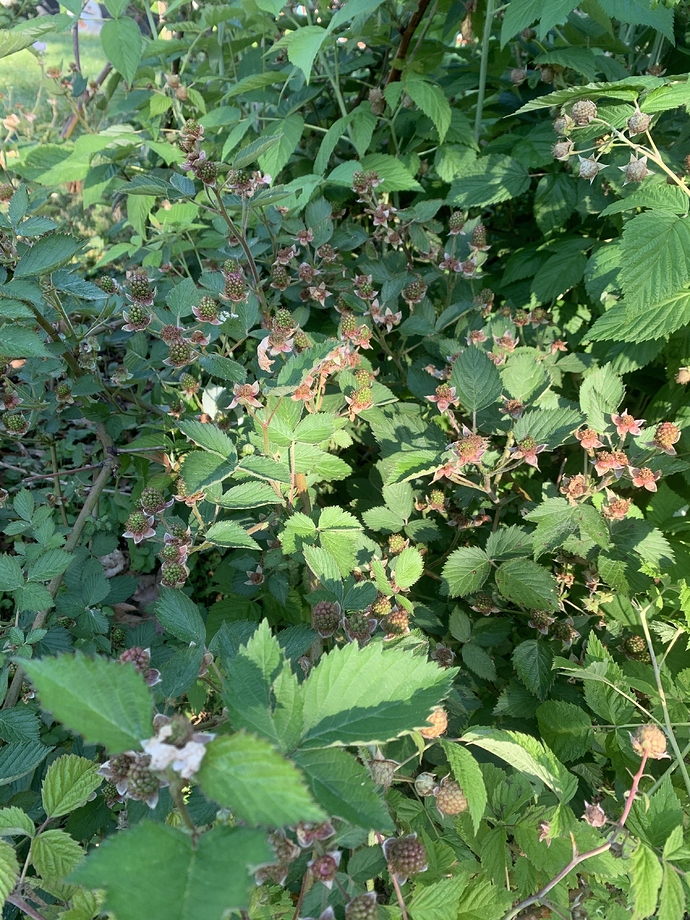 Here in willamette valley my Columbia giant is almost starting followed by my wild treasure turning red. Boysenberry and kotata are still green. Ate a handful of blueberries today as well 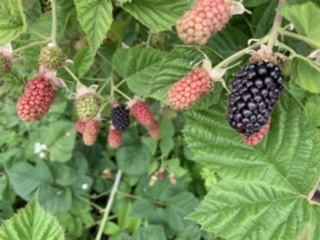 The Joan J raspberries have been giving me a steady harvest since last weekend. They are my darkest red raspberry. 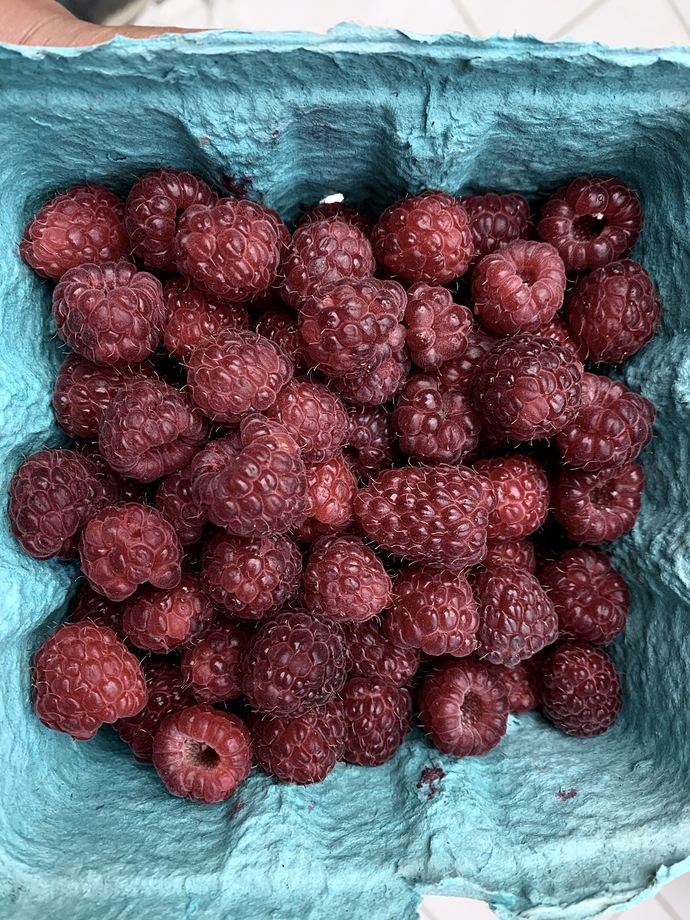 the color is like my royalty purple rasps. my joan js should fruit for me for the 1st time this year.

hows the taste compared to other reds?