Good timing… I have the day off tomorrow for Presidents Day. Will get these planted.

That is a loganberry prop in the background… still has leaves on the growing tip (all winter)… may try to move it tomorrow too.

I’m busy installing kiwi trellises when the ground isn’t too frozen. Have a plum and some mulberries from last fall that I still need to plant. Not enough time in the day…

My season has a bit until it starts. Stark bros will not start shipping here until March and even that is easily for my area. That will be my first 2 trees to come assuming they don’t cancel on me again. Then in April it will be a free for all with a bunch of trees. I will have a Nectazee Nectaplum, Green Gage plum, A Marias Joy PawPaw, Shenandoah PawPaw and a trilite peach coming from One Green World. Also in April I will have a Spitzenberg apple, Beverly’s green gage and a Magness pear coming from Trees Of Antiquity. Another few trees of both a Comice and a Warren are coming from Raintree in April. Then come May I will get a Sapodilla and a 5 in 1 apple tree come. In other words I am not getting much now because of my zone but am going to be getting 12+ trees in a few months.

Stuck gooseberry and currant cuttings earlier in Feb. Also potted some plugs…honeyberry and blueberry. Tempted to do the first apple or pear grafts today but resisted as it’s going to get into teens one more time this month.

So far I got negative 1 New Zealand lemonade. One died this winter.

Wase and Giant Fuyu from JFE. More to come. 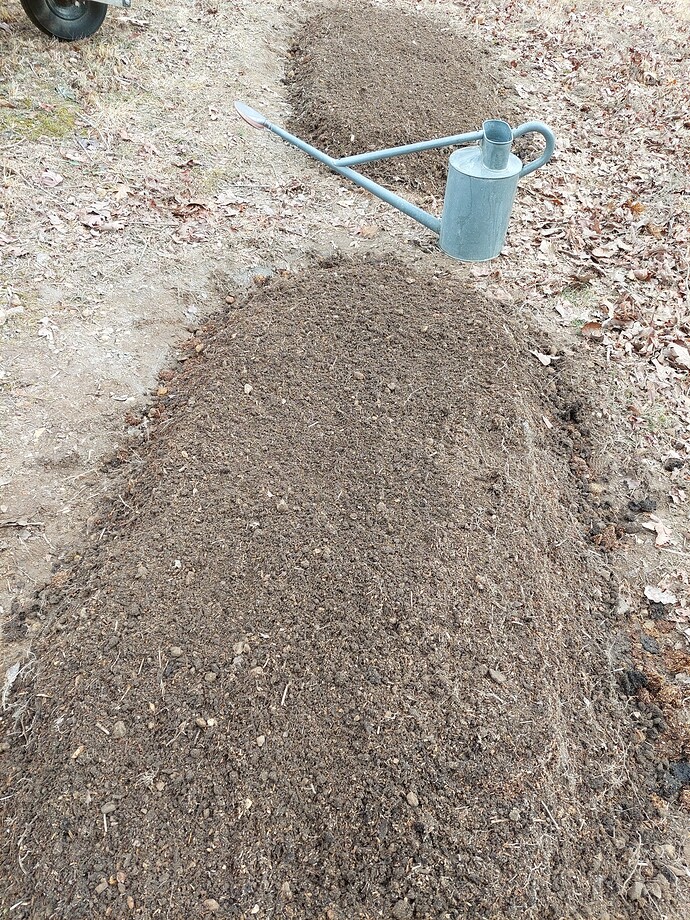 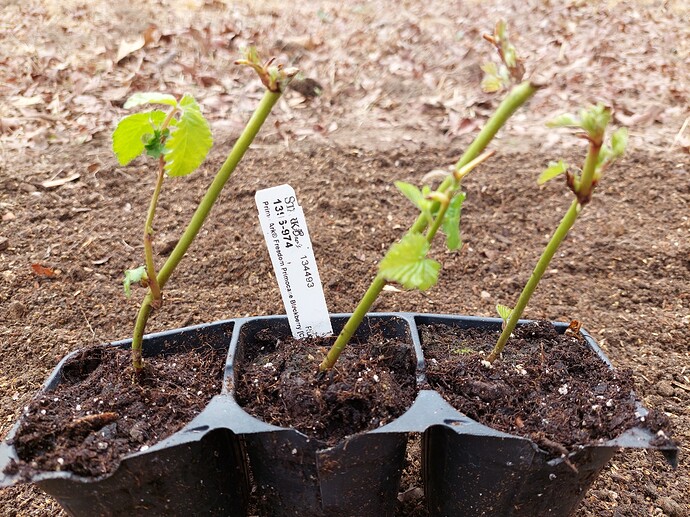 Well I was all fired up about planting something… got a couple classic TNHunter borderless raised beds ready… opened the s
Starks package… and YES hard to believe for a man… I read the instructions.

Sounds like I better baby these PAF blackberries a while before planting. I am going to up pot them some and plant later.

I did get my loganberry prop moved and planted.

Will have 3 PAF and one Logan crown in those two beds. After planting the Logan in there… put down some mini pine bark mulch. That propagated Logan crown had bunches of roots and one nice primocane sprout getting ready to emerge. 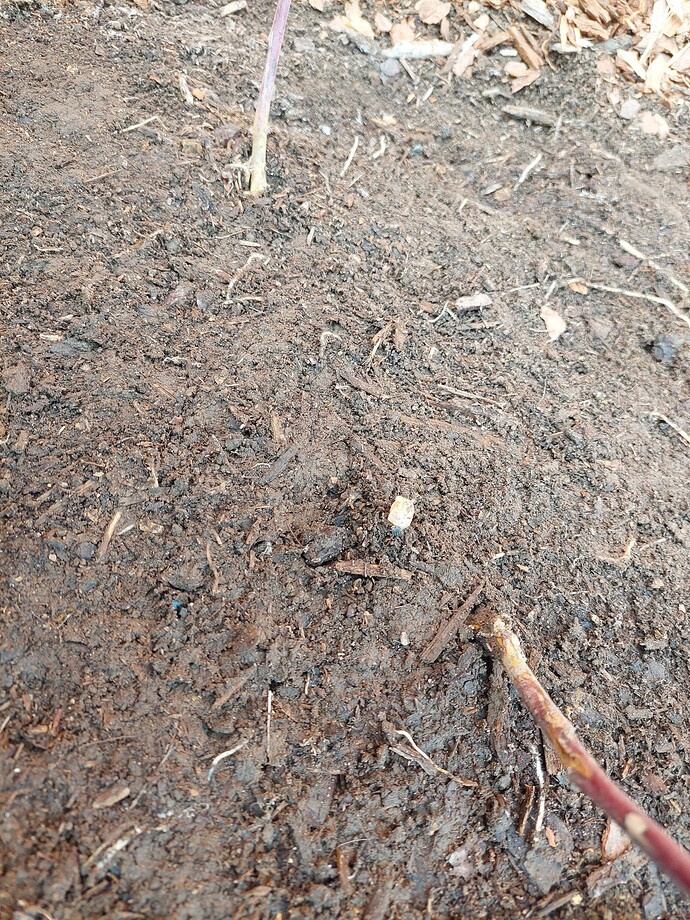 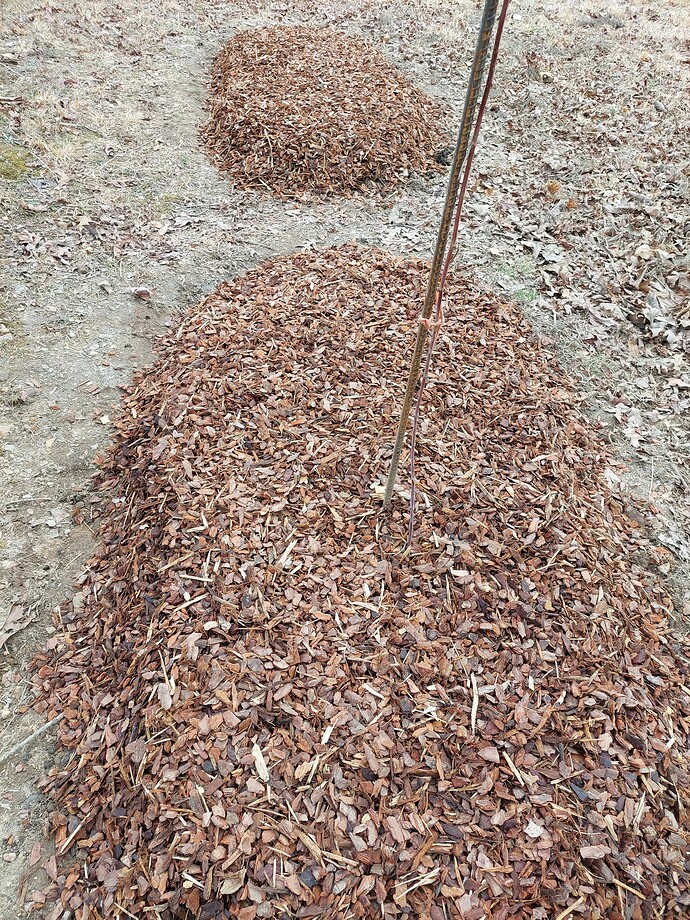 Good to get my hands dirty 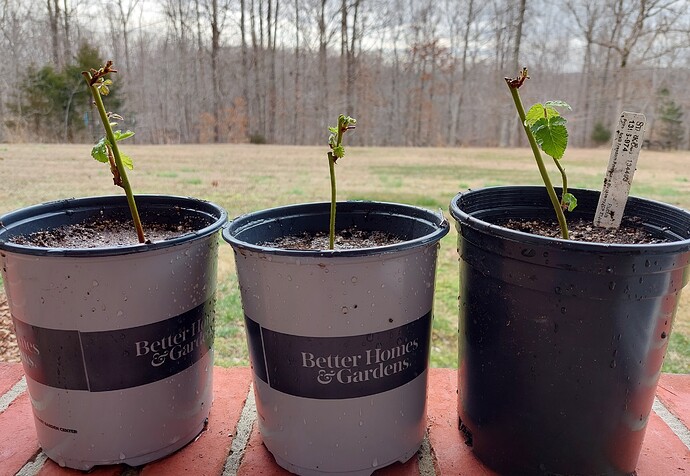 Up potting done… much nicer home for the next few weeks. Leaving them out some today 60 degrees here.

It’s still early for me, but I did trade and got a Hannah’s Choice blueberry, and Aurora Honeyberry, even though I have a large plant, it was free so saves me an air layer.
I will plant them out in a month or so.
I always order potatoes, I’m still eating last years. Yesterday I made Authentic New Mexican Green hatch chili stew. I have made this dish dozens of times. The Mexican oregano, potatoes, hatch chili peppers, and the garlic are from the garden.
I’m busy trading and prepping scion right now.
I grow all winter, so it never ended. I grow basil, and Mexican oregano all winter, also grew some figs all winter that were seedlings. And started rooting eight varities of figs I want to check out
Sofreno Tradicional A traditional Portuguese fig
Cardenillo
Mercedes Gem A found fig in Brooklyn
Mercedes ditto
Cherry Cordial a new wild seedling
Paratjal Rimada a replacement for the one I killed
Papone
White Madeira #1 I like these green figs with red interiors. I want to keep the best ones. This one rates high.
Bordissot Negra Rimada I like rimada’s or variegated plants. I grow a variegated elderberry and Beech tree too.
Panache 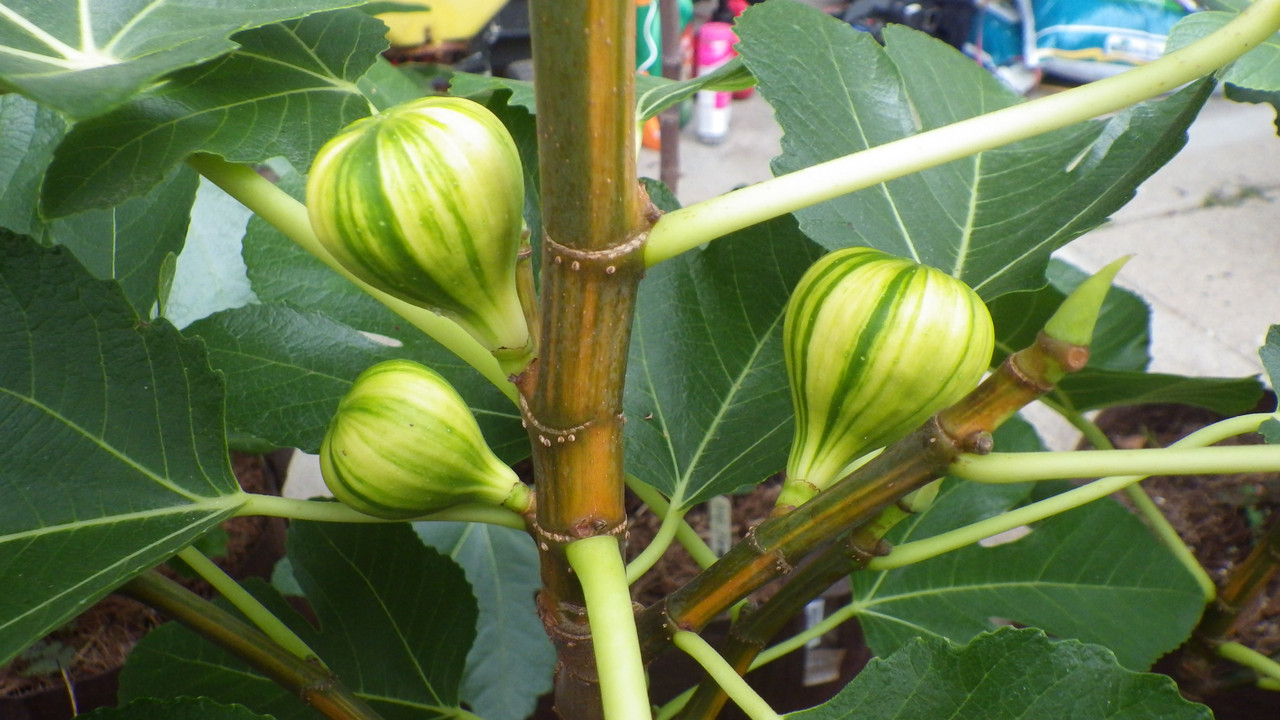 First fruit will be Goumis from Hidden Springs and Jung. 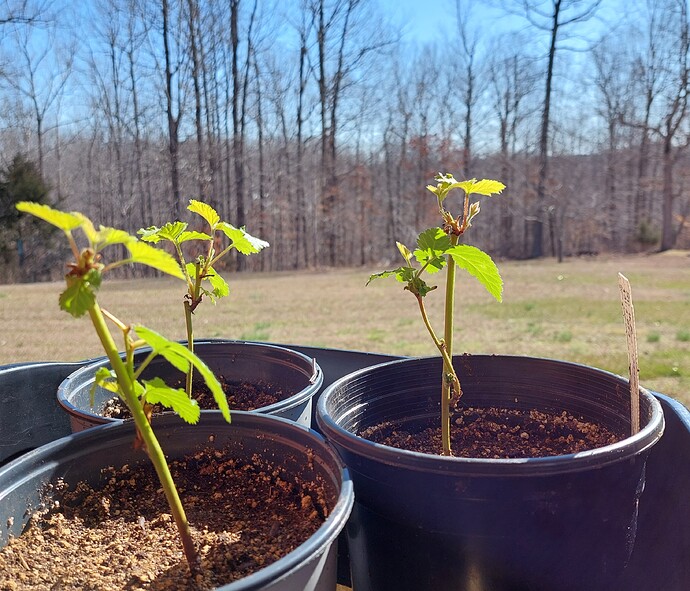 Putting in a Silk Hope Mulberry from Burnt Ridge this week. Then I gotta head out to @K8tpayaso for a Honey Jar jujube.

Glad you got a Silk Hope! What size is it?

I believe I’m supposed to prune it back by half once I plant it?

Fruit-wise, I have been wanting to try Pacific Groves Ultra Dwarf Patio Fruit Trees for a while now, and ran across a shipment of them at Home Depot that had just come in. So I bought a Red Baron peach, Stella cherry, and Goldmine nectarine. They are in pots because I’m out of space in the ground for trees.

My thoughts on that are whether you want your first scaffolds that height. I very rarely just automatically cut mine. I did my apples but I didn’t my mulberries and I never do jujubes. So that depends on the tree and the structure you want it to have.

Last year - Bought a couple of kiwis, too lazy to put up an arbor, so potted them up and they dried over summer as they are too finicky to maintain in pots

this year - Bought two of them again, started digging for the posts and hurt my back

so, called a gardener for help and he finished it in less than an hour! I at least made small boxes hoping they help with the drainage for the vines. Not sure if these will survive this year 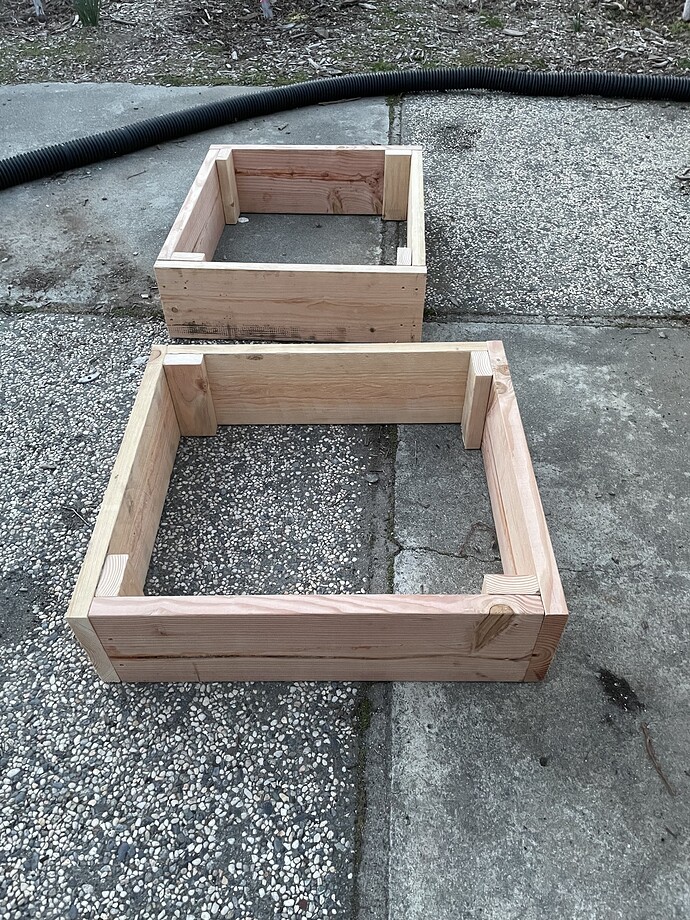 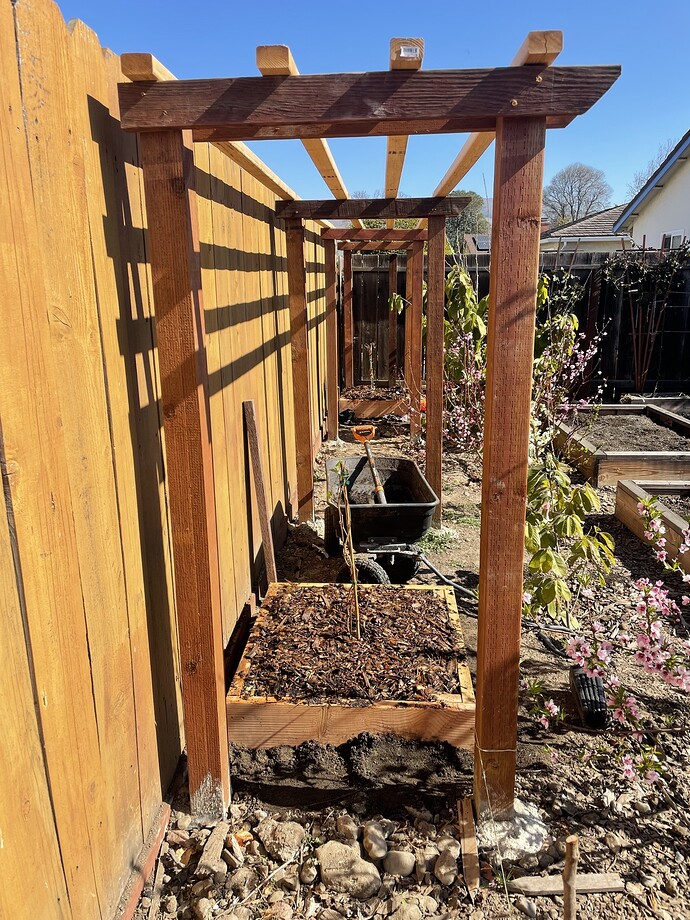 TN, really like your planting can. I have something similar, not as nice, it is an old tobacco setter, some folks used it for sweet potato sets. Have never seen one quite like your picture.