I couldn’t find a grafting thread for this year, so I guess I’ll start. I’ve got a decent number of grafts I plan on doing this year, but so far I’ve just done this Satsuma plum. Grafted 10 days ago and starting to show some life up top, so fingers crossed! 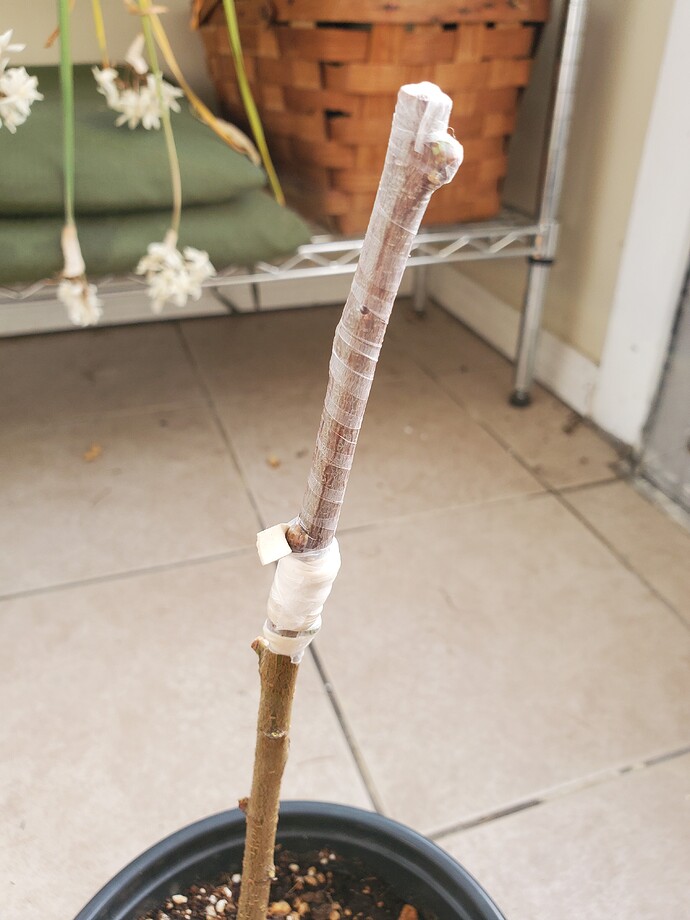 Here’s one I grafted at the end of February—Asian pear on volunteer callery. It seems like it might take. 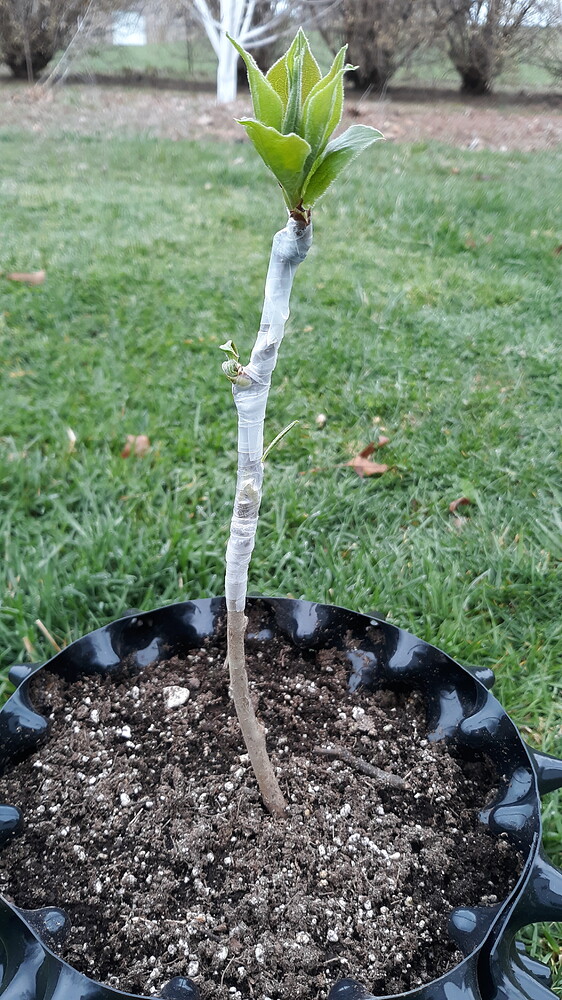 Pear and apple rootstocks should be arriving today. Going to try a few plums on Prunus americana, too. 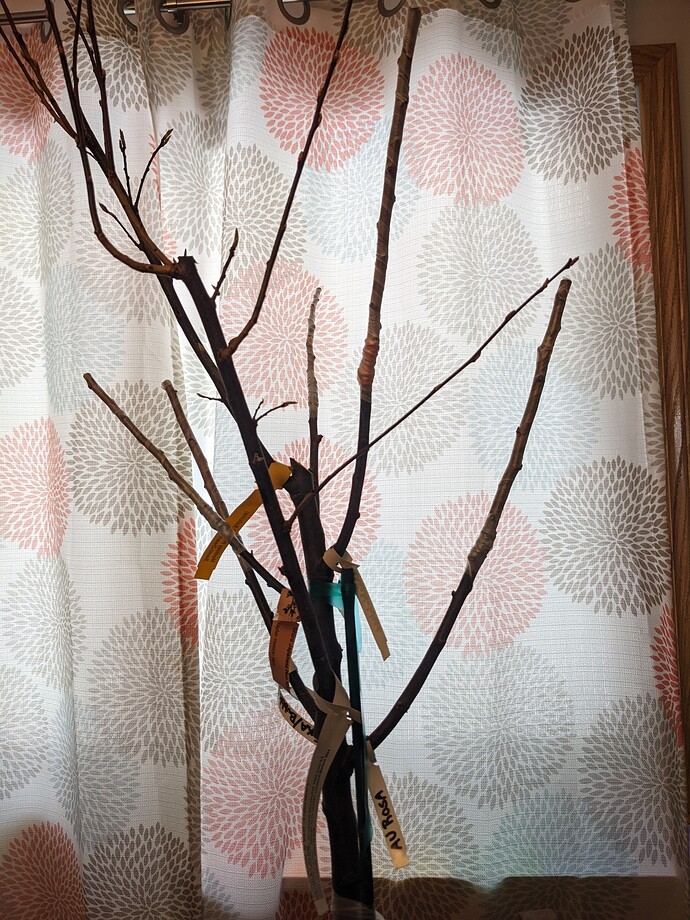 Not a great picture, but I topworked a potted Methley plum to also have a branch each of Shiro, Toka/Bubblegum, Oushi Wase, AU Rosa, and AU Rubrum.

I’ve done a few grafts of @LarryGene’s feijoa on my bushes, trying some with leaf nubs left on and some with leaves removed: 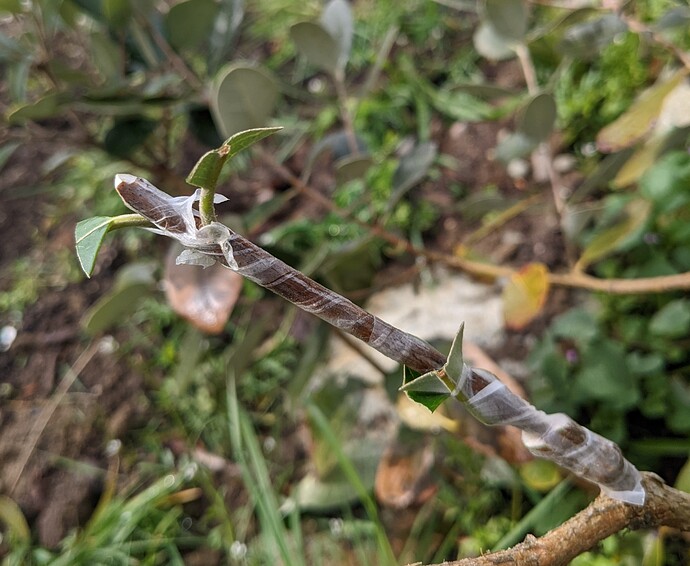 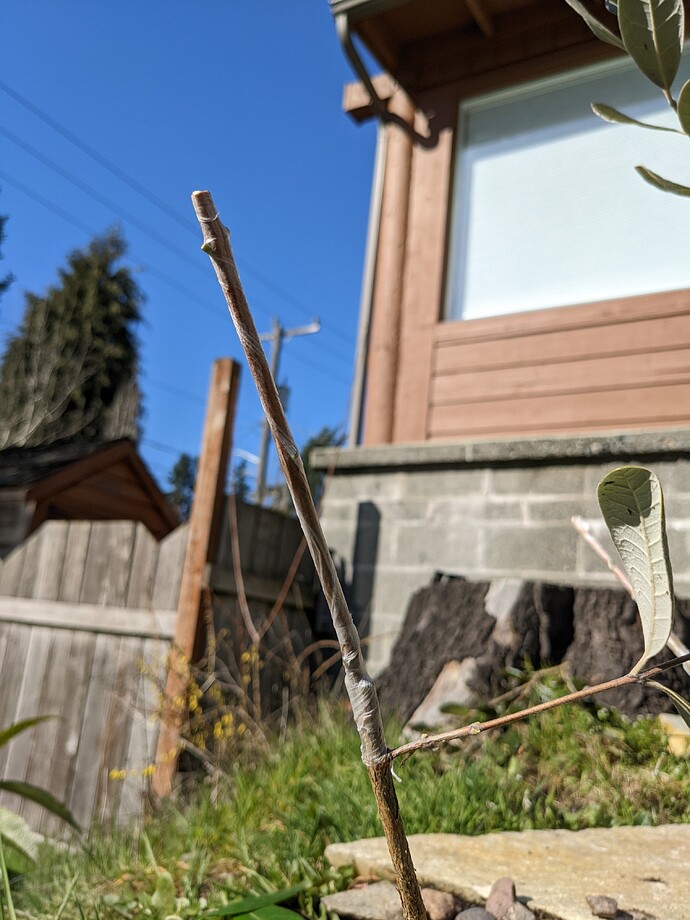 Also, the avocado grafting is continuously ongoing in the greenhouse. Here’s a graft of the historical cultivar “Mayo” on a Zutano seedling, grafted in late January and pushing now: 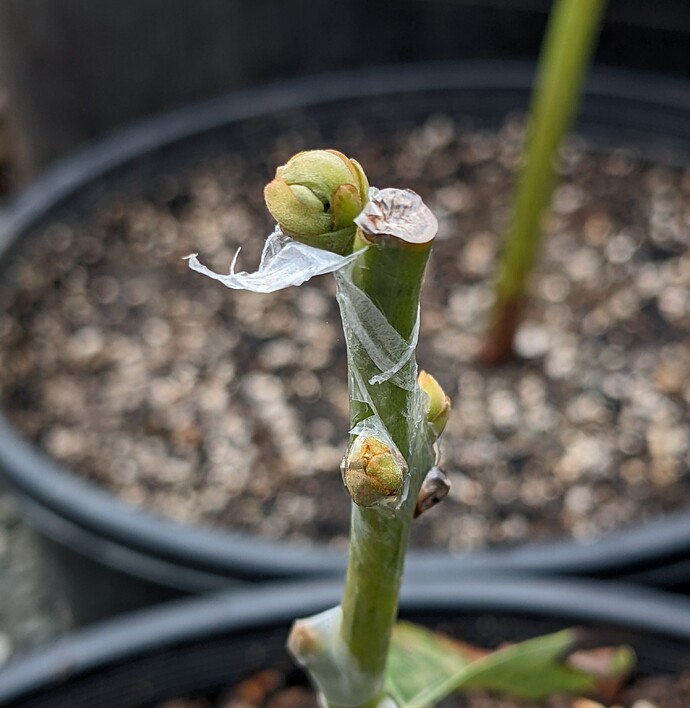 The Brushy Mtn. pawpaw scion wood has been sent along to a very kind member here, but I never grafted anything but apples. What rootstock is used for pawpaws and from where?

The seedlings are a pain to dig even in small/tiny calibers. Thought that might be a problem in growing rootstock if not grafting to an in-ground established seedling?

Are they grafted the same as apples, I use 3 bud cleft. I asked the NC Ag Ext Fruit Specialist to help register the pawpaw beast this week, will give her a 2nd call tomorrow.

Finished chores for someone in Crab Orchard today…so I have time to get started on 130 apple rootstocks and some pears. Probably Sunday to add a dozen or more to an apple Frankentree…and start another pear Frankentree.

I have a pretty fair number of seedlings in pots…but I’ve got too many apple and pears to graft to think about doing anything else this spring. 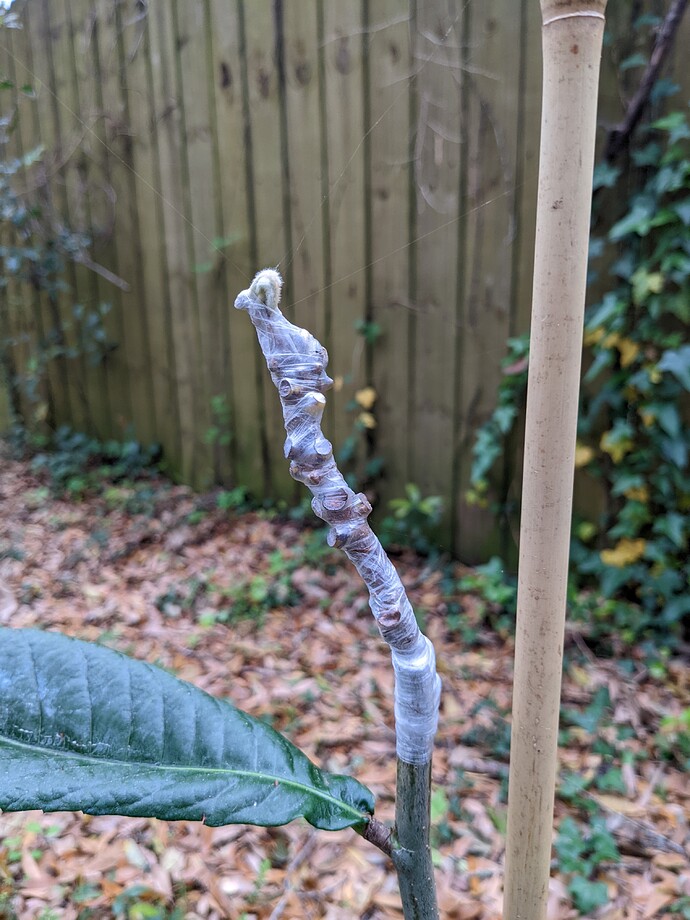 Good to see people starting grafting. I’m new to grafting and plan to graft a lot this year. May be a stupid question but is it too early to start grafting or are you guys bench grafting indoors and plan to move plants in ground at a later date when chance of late frost is gone.

I have done bench grafts in February in 40 degrees outdoors…and more than 8 out of 10 grafts succeeed…apples. So, this current spell is ideal. Indoors if it rains or gets too cold, other than that current conditions are perfect so far as I am concerned for apples/pears.

It’s 63 and I’m heading back to grafting…and putting the fresh bench grafts in pots of soil…got another hour plus of daylight.

Attempted some bench grafts this afternoon. Chestnut crab, Pai Li pear, Tennosui pear, as well as a few scions from trees I have. Mostly cleft grafts, though I also did a splice and a saddle with a Zenport-type grafting tool. The tool cut fat scions pretty well, but tended to crush smaller pear wood. Many of the clefts were quite a bit rougher than I’d like, but I strove, to the best of my very limited ability, for good compression and at least some cambial contact—so I’m keeping my fingers crossed that at least one from each variety can make it. My first victim (cleft grafted end of February) continues to grow, so maybe there’s some small measure of hope for these. 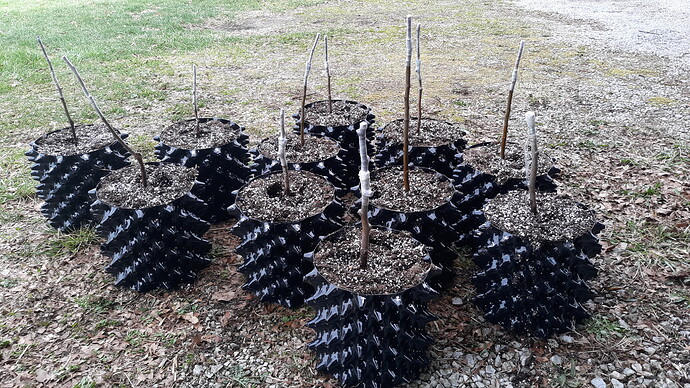 The Tennosui scion, curiously, was starting to swell its lowest bud—actually showing some green—despite the fact it’s been in my refrigerator (which runs at around 35F) for a few weeks. Don’t figure that bodes well, but I went ahead and grafted it anyway. The upper buds seemed more asleep, so maybe there’s a better chance for the graft that I got out of the top of the scion. If not, there’s always “some other spring”!

JT, what are those porcupine containers? When the plant specialist comes this month, I’ll remember to ask what he is using for pawpaw rootstock at NCSU.

They’re root pruning pots, to prevent root binding/circling. I like starting trees such as chestnuts in them, so figured they’d make a good temporary home for pear and apple rootstocks.

I’m having a hard time grafting Friar plum onto any of my other trees. I bought some scion wood last summer and chip bud grafted a whole bunch of several varities onto my trees. The only one that is giving me problems is the Friar. I was under the impression Friar was Japanese so I grafted it onto my other Japanese plum trees, and the ones that are half Japanese half American plum (like my Superior plum tree). I did not graft any onto my single European plum tree maybe I should have? I’m not totally sure I’m at 100 percent failure on Friar but it might be. The few that I’m not sure about have swelled up at the graft and might be a whole different problem. This summer will be my fourth year of grafting so I have three years of trying under my belt. Still a newbie. Anyone have ideas about my Friar problem? Thanks in advance.

I have some of those. They can be a pain in the ass though. They dry out faster. And if you use them indoors with potting soil that is hydrophobic and won’t absorb the water (I think that is the term), the water just spills out the top holes. And the fact the bottom of the pot is an inch or two from the ground surface (so air can circulate under the pot), you need a deep dish to bottom soak the pots. Outside though with a sprinkler I never have that problem. But they dry out faster than the normal pots so that is something to watch for.

Friar is an Asian Plum.Is it possible,that the scions were bad?

I didn’t think so last summer but now I’m wondering. Or wondering if I got a mixed up order and sent a Euro plum instead? I’m still not sure that all of them have failed so I’m crossing my fingers on the “maybe” grafts. But I’m not holding my breath for it. I’ll probably try again but I might buy the tree this time instead of scion wood, and grow my own scion wood from it. Instead of buying more cuttings.

Another thing to remember about those air pruning pots for people that have never used them, are that the bottom needs to be put in the proper position which is a couple notches up from the ground (there is a row of slightly longer points on my pots and that is where the bottom fits). I didn’t know that at first and originally put the bottoms on the last point which was too close to the ground, and the roots just grew through and into my ground soil without air pruning themselves. When I would go to pick up the pots they were stuck to the ground. Raising the bottom to where it’s supposed to be helps prevent that.

Depends but doubtful I have grafted euros to both Shiro and methley with no issues. Asian plums are very genetically diverse I bet bad wood …have also found some varieties more sensitive than others (ie temp of what have you)

I’ve got you covered, I bet. I just dug up 3 pawpaw runner trees, and they came up with enough running root. They’re heeled in now. I don’t need 3 more trees, lol! I could ship these bareroots and they’d do well if not in a lot of sun. Their wood is a good caliber. I didn’t get to them last year, lol. My pawpaws are just pushing buds and flowers.