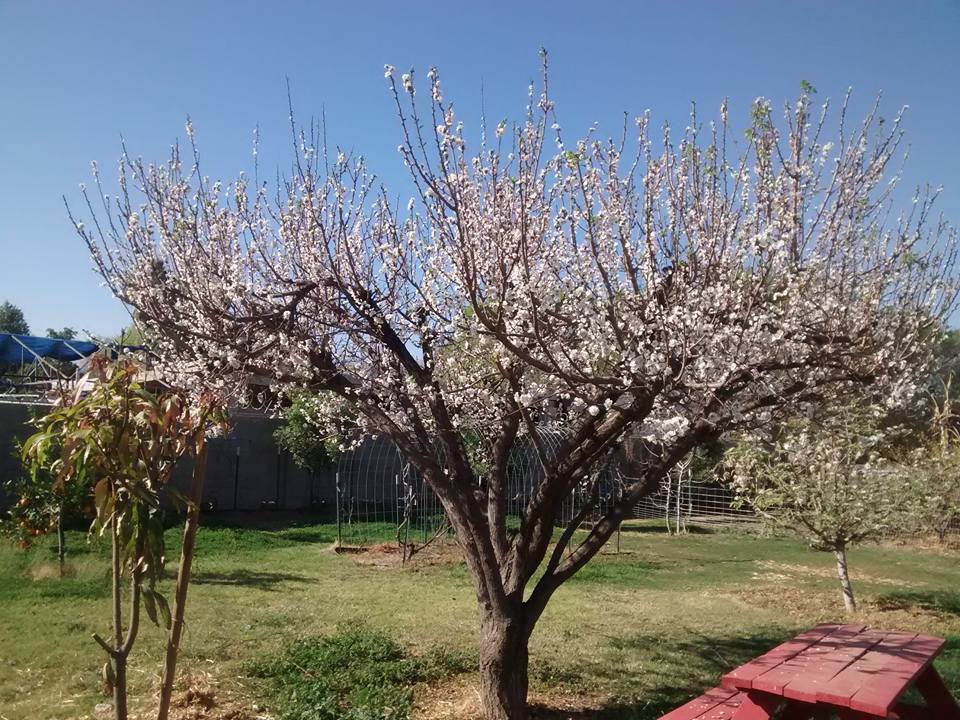 Its going to be a good apricot year.

Very nice. I hope to see something like that in my yard some day!

Eric, is that the Amadiocot?

Yes it is Tony.

Most amazing tasting apricot ive ever had in my mouth. Soft (so soft that they bruise immediately if piled on top of one another when harvesting) and full of juice.

Eric,
Do you have pics of the fruit? If you have already done so on another post, I missed it.

I have apricot and one of the peaches blooming like that. It looks like a terrible fruit year. Last average hard freeze date April 26 and trees blooming in February.

I’ve had them bloom March 16 before but never in February. We lose more years fruit than we make. Sour cherries and pears usually make it but everything else is hit or miss. Its funny I saw a post from Canada that said there last freeze was early April and ours is late April.

Tx,
When someone posted a viedo of a man growing lemon trees in ground in Vancouver, Canada, I checked the temp he mentioned. His area is comparable to our zone 10. I did not know some areas in Canada can be that warm but now I know.

@mamuang there are pictures in this earlier post. The great apricot mystery

Looks like @tonyOmahaz5 was the first to coin the name! Good job Tony! Just by coincidence I was just out grafting up all the persimmon cultivars you sent. Thank you!

@txpanhandle1 its stories like yours that make me very happy to be growing where I am. We might have low chill winters occasionally (not a issue if you are smart enough to grow low chill varieties along with some medium chill). But never is the weather bad enough to wipe out a harvest. Thats a depressing reality youall get to deal with.

Oh boy, Eric, I would love to get some scionwood from you from your Amadiocot (love the name, that is so cute). I’d be happy to send you whatever I have you would like - stone fruits, pomes, pears or figs.

Patty I had no idea or would have sent it when I sent out those figs to ya. Happy to send it out.

Jeepers, I should have remembered, because we chatted about it in the first thread. Ugh, “senior brain”, perhaps, lol! That would be wonderful. If you want to PM me and see if there is anything I have that you’d like, just send me a PM!!

ps. fig cuttings are starting to show a wee bit of life due to all the heat we’ve had. Amazing.

That is certainly a beautiful sight to see!

And your description of the fruit simply frustrates my imagination… It sounds amazing! Wishing I could just visit Arizona during the apricot season. lol

I missed the original thread on this apricot. Have you compared it to Mormon? It was once a very popular variety in the southwestern US. It needs 500 or so chill hours. Seedling apricots are not uncommon though and there is a good chance it is a seedling.

I have not. Ill have to track down a scion of it to compare. Ive never heard of anyone growing that cultivar here.

Along with Mormon there are other apricots that were popular when this tree started out that you may have not heard of. Mormon is more popular in colder spots so that might not be it, but it could be one of these other ones. If you could find a catalog or book about western fruit growing from say 1960 that would be a good place to look up potential varieties. The Sunset Western Garden Book for example.