These were up in 7 days from seed. Actually 2 were up in 5 days, but the third variety came up this am. Gotta love the Georgia heat sometimes

) Sugar Baby, Crimson Sweet, and the rare Grover Delancy. Trying my tested favs for this year, and maybe next year will branch out to the BIG Georgia varieties. 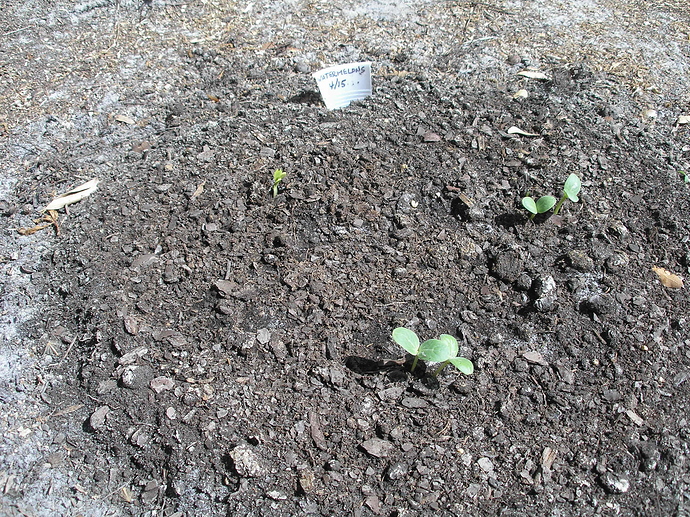 @thecityman, you’re being paged! (He is the forum WM guru)…

For the first time in my life as a hobby orchardist, I scatter-planted a packet of Crimson Sweet. They are peeking out of the ground like yours.

Blacktail Mountain and OrangeGlo are what we will try to grow this summer. We started some from seed indoors for transplanting in another couple weeks. In early June, I’ll also plant some seed directly in the garden. I hope it gives me a fair comparison of which method works better at my location.

Blacktail Mountain did very well for me up north in Zone 5.

I’ll leave that title to @rayrose, but it is true I enjoy growing them. my garden was ready a week ago, but it has rained EVERY SINGLE DAY for more than a week, so I haven’t got mine in the ground yet. Are you going to try some again this year, Bob?

Georgia is the watermelon Capital of the world, as you know, so I’m sure you’ll do well, @edweather. The area just beyond your seedlings look like that sandy soil that makes Georgia such a watermelon Meca. I honestly think the reason I love watermelon growing so much is that as a child, every year our family would go on vacation to Florida, and we would always stop in Cordele, GA- the MECCA of watermelon growing. My dad would somehow always find someone who let us go out and pick our own melons. Most often, it would be after they had already picked all the ones suitable for market, and they would just tell my dad we could have all we wanted. I can still remember my sister and me walking with my mom and dad through the fields and just cutting open melons and eating the heart out (they leave behind a surprising number of deformed/mis sized melons). As a child, that felt like the greatest thrill in the world! I had no concept of money and I thought watermelons were really expensive and eating only the best part was such an amazing thrill! Not sure why I tell that story-typical me blathering on.

I have never tried Grover Delancy…not even sure I’ve heard of it! Have you grown it before?

I must say I lean toward the last 2 posters in that I prefer Blacktail Mountain to Sugar Baby, but they are very close to same thing and share the problem of having an awful lot of seeds per sq inch of flesh- but SB seems to have more here. Crimson Sweet is always a standard for me and its one of the most popular watermelons ever for very good reason. @UnderDawgAl - OrangeGlo is my overall favorite watermelon of the 51-53 varieties I have grown. Strangely, though, last year they let me down a little for the first time. Not sure if something else sneaked in during polination of the seeds I got, or if weather conditions just weren’t right. But I’m sure you’ll love them. Good luck. Happy melon Growing!

Actually, I haven’t thought of watermelons this year. I’ve been up to my eyeballs in other fruit stuff, it’s slipped my mind. I might try a few seeds this year, but need to find a place to put them.

It has finally dried out enough for me to plow this week, on Wed. I got four plots done, need to do one more, but it’s been raining lightly off and on for most of the day, so that will have to wait. After that, I’ll run the disk over them, add fert and lime, and till it all in.

The forecast was for about an inch and a half of rain, but we’ve only had maybe a quarter inch, so we dodged that bullet. I imagine y’all have been getting drenched the last few days.

Would like some much needed rain here. Officially in a Level D2 drought, and headed toward D3. 6 days of rain in 6 months. It’s like desert dusty dry here. Yes, that is the Georgia sandy soil you see. Unfortunately, because of all the oak leaves, the pH is 4.7. So I mixed garden soil with the natural sand in the planting hole, and limed the area around to try and bring the pH up a bit. We shall see…About 10 years ago I received the Grover Delancy seeds from Amy Goldman through SSE. She said that the melons were sweet, and had less seeds than average. She was right, and they also grew the best for me of any watermelon in my Z5 location at the time. It’s basically a light green, and slightly oblong, and maybe 10lbs at best. The flavor is a bit unique. Here’s a couple of photos from the crypt. 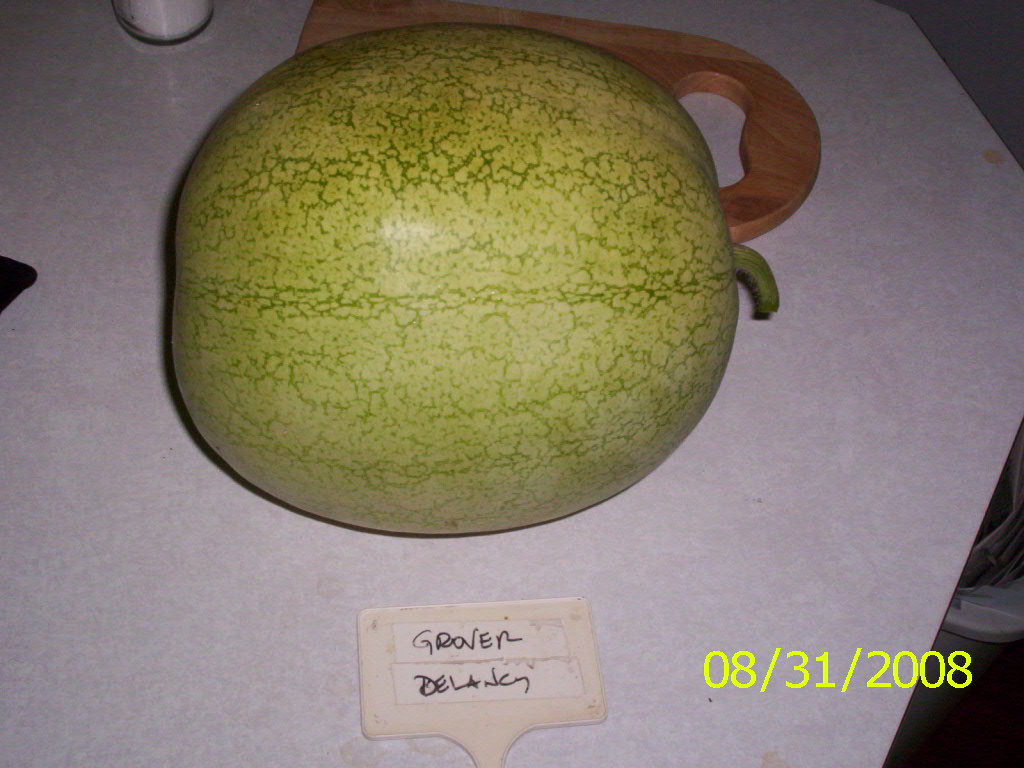 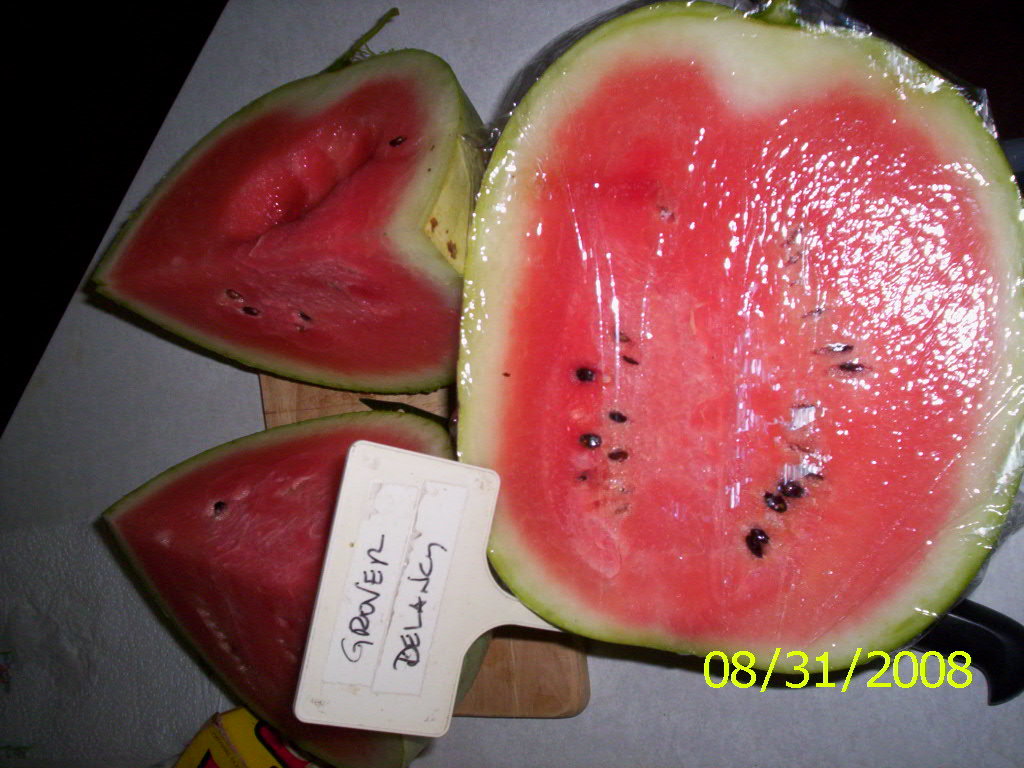 Check out my new thread on Illiniwek Red Seeded Watermelon.

For me it’s orangeglo, crimson sweet, ali baba, little baby flower watermelons. Plus sugar queen, Sarah’s choice, tasty bites, savor cantaloupe. I have come to realize that out of all the stuff i grow, melons provide the most pounds of sweet yummy fruit per unit of effort, at least in my climate/soils.

I think I grew Sugar Baby because of the “Sugar” in the name, looking for sweet melons up north. Also they are early, and their Black skin makes them ripen fast. Might not grow them next year though, we’ll see.

I’ve got the same drought problem here. One good rain since Christmas.
I hope we don’t get the same drought that we had last year , which was the worst crop I’ve ever had. Hope to have my fields tilled by the end of this coming week, and planted, when the night time temps consistently stay the the 60’s. Will be planting extra melons this year, in order to make for up losing most of my stone fruit to the freeze, including a new variety called Fulmer.
For those of you planting Cimson Sweet, you might try Big Stripe. It’s a much larger version of CS, IMHO a far better melon.

I’m also doing watermelons this year. Its my first try ever. Mine still grow indoors. For the next week forecasts show another cold spell with night frosts.

One question that bothers me and I seem to be unable finding a clear answer is: Are watermelons selffruitful or is this a special trait in some varieties? I try to grow Sweet Siberian, Janosik and Blacktail Mountain. I would like to save some seeds of those for next season. Is that possible? Do I have to separate the varieties to avoid cross pollination? Is it possible at all?

Since those varieties are obviously propagated by seeds it seems they are selffruitful. Is that correct?

Yes they are self pollinating. That being said, when I lived up north, and struggled to get a watermelon crop, I would “help” the pollination with a small soft paint brush. The number of female blossoms were coveted so I wanted to make sure they got pollinated. I would go out in the morning after the fresh male and female blossoms opened up, when the pollen was fresh, and do the deed. In the hot sun, the pollen/male blossoms, and the females dry up and become inviable by noon. Imo there was normally only a window of an hour or two to get it done. It was very successful. Also you can save seeds, but the plants might cross pollinate when growing more than one variety.

All melons are self fruitful, but they will cross pollinate each other, which means the seeds will not be true to variety. So you’ll need to buy new seeds every year, or take a gamble with the seeds yielding viable fruit, just not true to variety. In order to yield fruit with true seeds, you’d have cover the female blossom and hand pollinate it, so it doesn’t get cross pollinated with another variety, or only grow one variety.

There is one melon that needs pollen from another. The seedless triploid watermelons need diploid pollen to set fruit. That’s the only melon I know of that isn’t self fertile. There could be others. The triploid seedless aren’t naturally occurring plants so this is a man made annomoly.

Rayrose, where do you buy your seeds from?

Ray has previously said that he prefers Willhite’s seeds.

I was on their website and looking to order and figured I would ask. Thanks Matt!