Wow! now, where were those growin’?

They grow on a large oak in my yard. They pop up almost every year. Always from the dirt within a few feet of the tree.

Awesome! I wasn’t sure that they came from the ground. I know very little about them. The ones I once found (and savored!) were growing on a rotting fallen tree.

reason we don’t have them up here is we don’t have oaks but I’ve seen them in s. maine. picked about 10lbs of king boletes last week at a park after after 1/4in rainfall. plenty of lobsters out too.

There’s more than one species. The ones that grow on conifers and eucalyptus are more likely to cause an unpleasant reaction in people. They can all disagree with some people though, so it is best to try a tiny cooked piece first and wait 15 minutes before eating more.

There’s a chart here with the differences.
https://botit.botany.wisc.edu/toms_fungi/jul2001.html

Man, I wish there were mushrooms around here this year. Tinder dry everywhere. Nothing but fires. Some year I will start a log so I can go back to burn sites for spring morels.
Funny thing is I’m sure it will start to pouring just as soon as my figs start swelling. Happens that way most years.

have you tried cultivating them? its pretty easy to grow wine caps on wood chips or straw. oysters are real easy as well. water the beds when you water the garden.

It’s funny, wine caps are supposed to be pretty easy. Yes, in that past I have tried multiple types of bed and log culture. None of the beds did well here. Oyster and shitake log culture work pretty good though. Some day I well likely get back into that.

Good post on the different chanterelles. I have only found the cinnabar one time. I have found the black a few times up in the mountains. I dried some but never did eat any because I wasn’t positive, although when you know a chanterelle is a chanterelle there is no real mistaking it. The blacks are really dark here, like charcoal.

All these giant mushrooms keep popping up in my yard. I wonder what species they are. I’ve never seen such big mushrooms before. 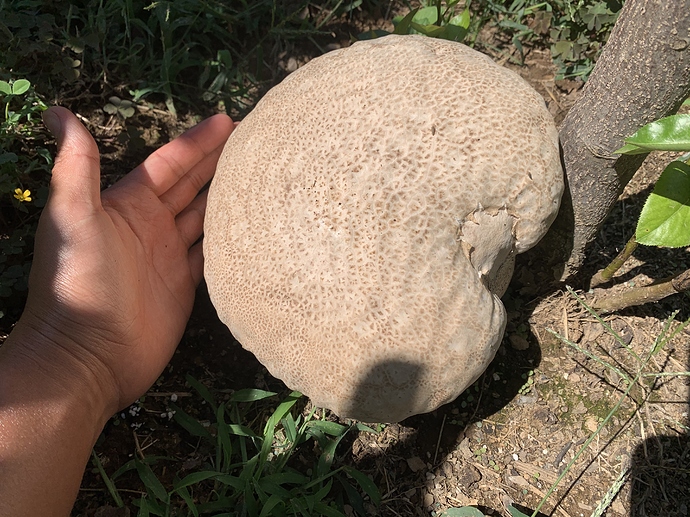 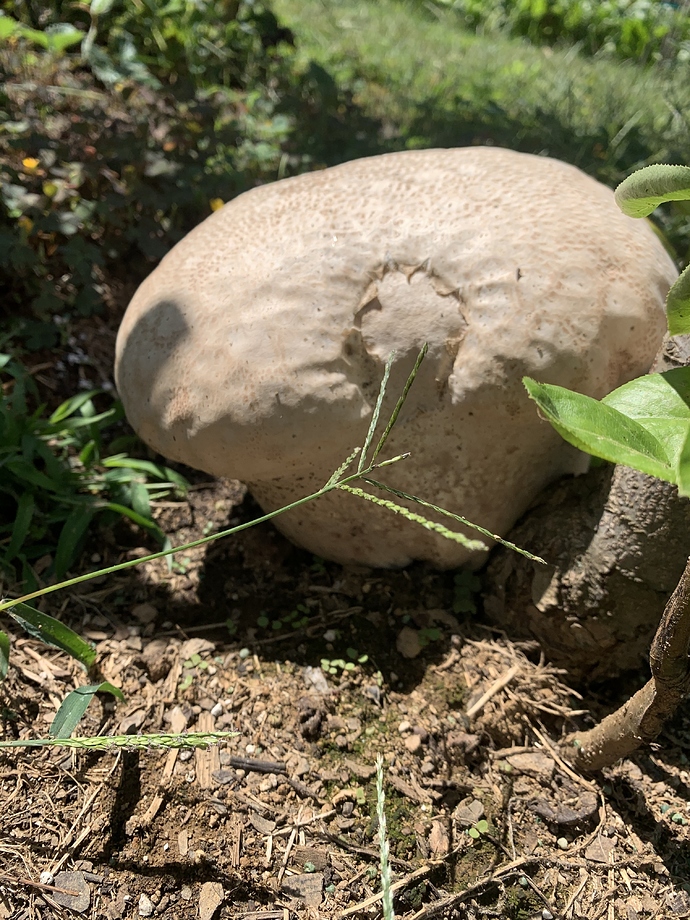 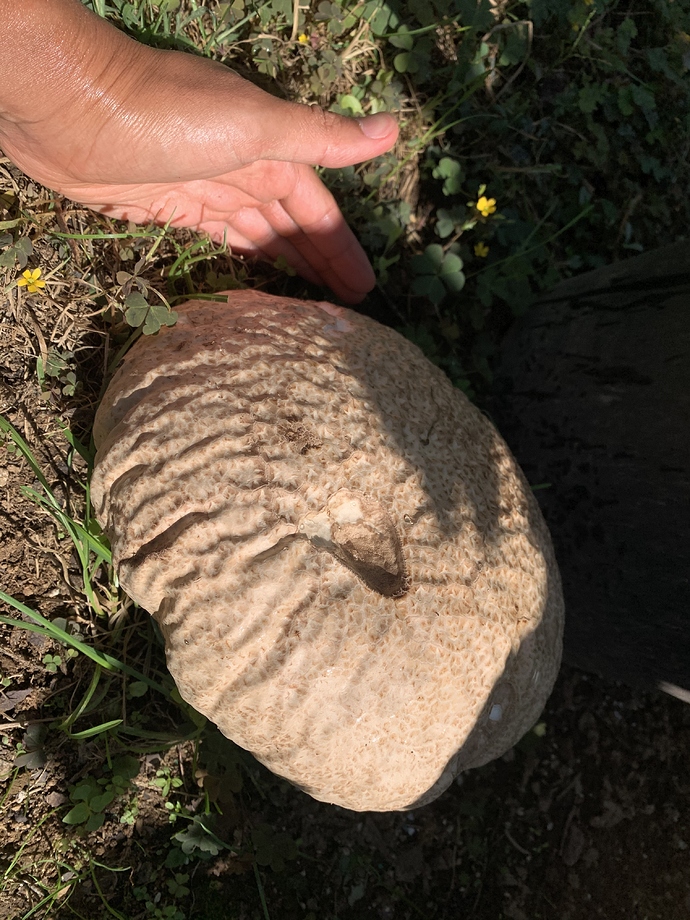 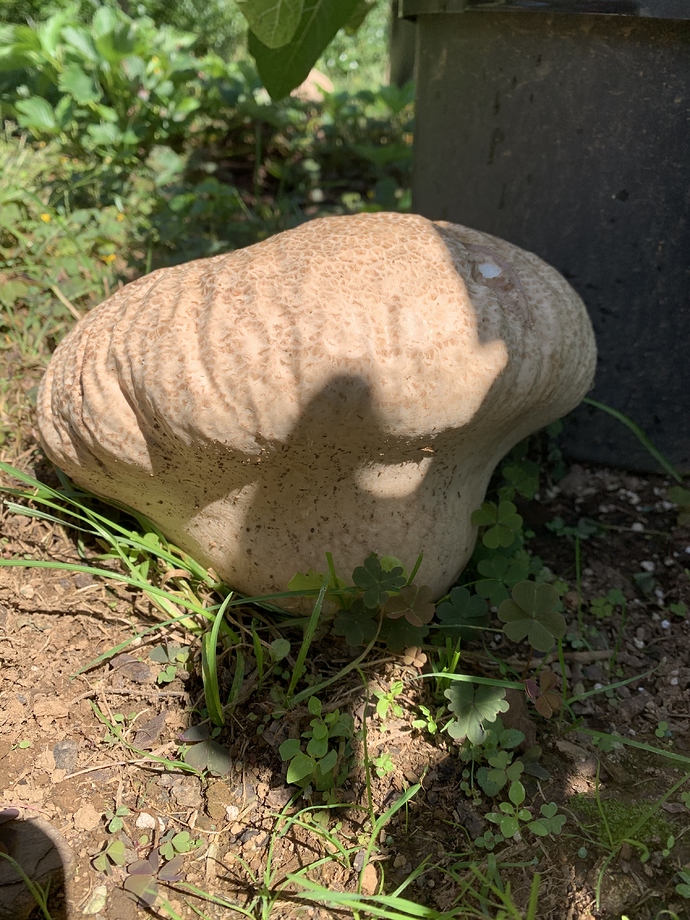 They look like a puffball similar to what wd het here. Are there smaller ones?

I didn’t see any smaller ones. I preciously cut one open, and it was solid on the inside and white in color. Couldn’t see any gills of any sort.

Check this thread Fall Mushrooms 2019 they look very similar to puffbals here at my location.

Puffball. Edible so long as they’re solid and white inside. If turning yellow/green, etc., discard…may not be toxic, but eill not taste good.
Slice like bread and sautee in butter. Mmm.

Thanks guys for the help IDing! They are very hefty mushrooms. It would be great if they are edible.

Can anyone tell me if this is really Hen of the Wood? They are about a foot wide and growing in an area near where a large maple was cut down 4-5 years ago. For the last few years I’ve been chucking them when mowing the lawn, but posted a picture in another thread and PharmerDrewee thought they might be HOTW, which from what I understand is not only good to eat but actually sought after. 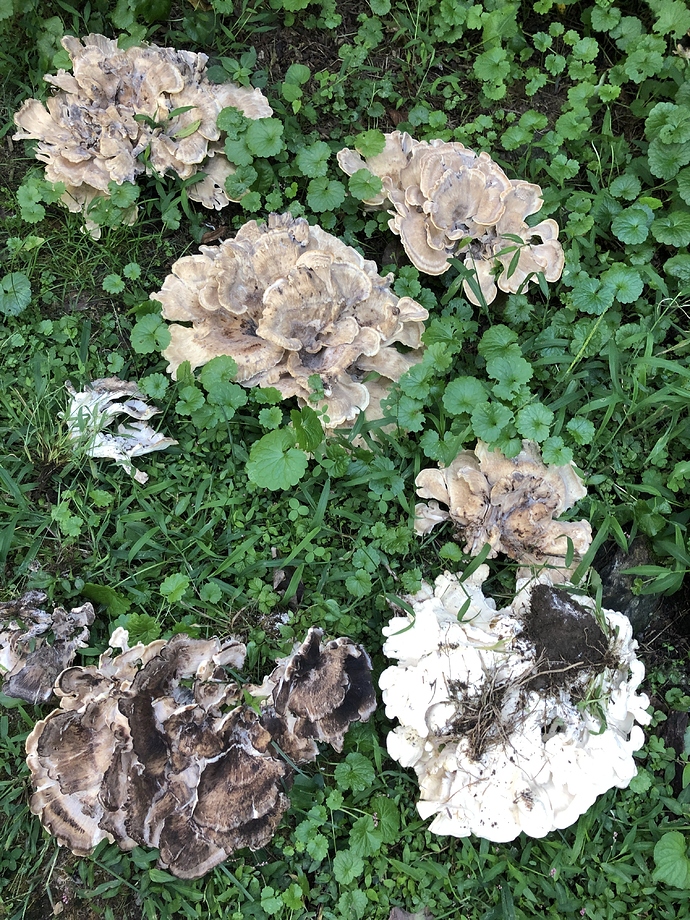 These average about a foot wide, maybe a bit more.

Is there anything I should look for to confirm their identity with more confidence?

They do look like hen of the woods. @Johnnysapples i know you harvest this type whats the best way to easily identify them? 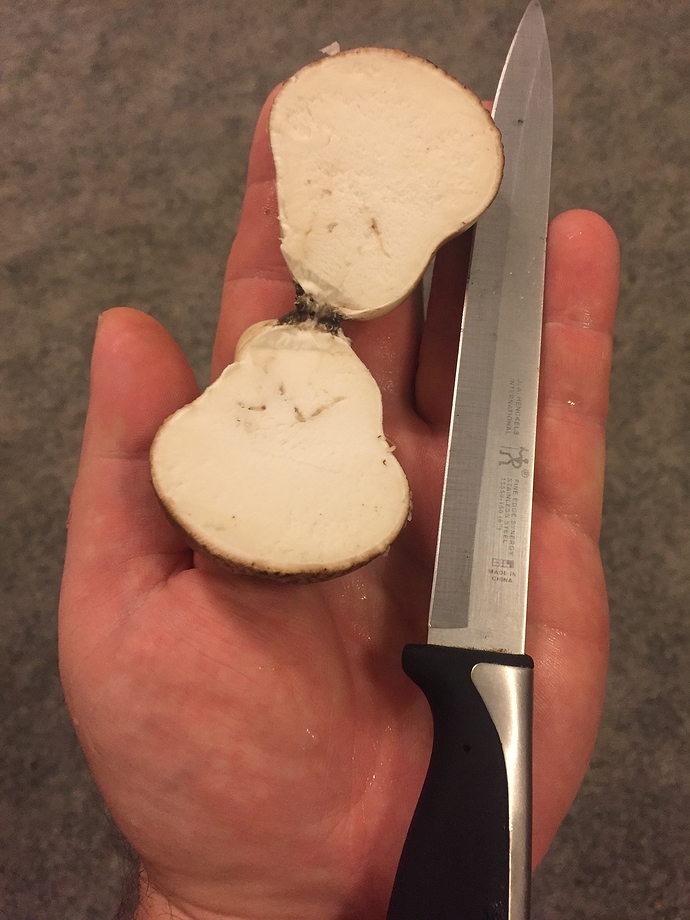 The fronds on hen of the woods are delicate, that appears to be a Berkeley’s polypore. The time of year is suspect also. Hens are fairly reliable showing up around the first week of October here, it could be a little sooner for you since it is a bit cooler there, but it still seems too early to me.

In the wild, Bondarzewia mesenterica fruiting bodies fan out in large undulating semi-circular fronds, its fuzzy surface zoned with many shades of brown (Fig 1). The pore layer below is thick (2-3mm), with pores irregularly shaped and soft, in texture resembling the russuloid gills to which they are related (Figs 2 - 4). The pore layer of Bondarzewia is deeper, more elongated and angular than that of Grifola frondosa which has a thinner (1-2mm) pore layer, and smaller, more tightly organized, pores. Most obviously, Grifola frondosa forms more numerous, smaller and drab grey-brown fronds, 2-6 cm across (Fig 5), while Bondarzewia forms fewer large fronds, 7-12 cm across, in more colorful shades of brown with tinges of purple and orange. Under the microscope, Bondarzewia spores are round with distinctive amyloid ornamentation (darkening to purple when stained with iodine) unlike the oval, smooth spores of the true maitake, Grifola frondosa

Or it could be a black staining polypore, but they are usually stained black by the time they reach that size.