I think the red cap are Amanita muscari, which according to wikipedia is probably not fatal, but may be hallucinogenic. I’m not going to find out.

They are actually delicious

But 100% a deliriant and also toxic before the ibotenic acid is neutralized from cooking.

I looked up hedgehog. I’ll take a look. although no way am I going to eat these mushrooms

Off hand and using my mushroom book, I’m guessing those big ones are Catathelasma ventriculosum, which are described as massive, mycorrhizal, growing under conifers, in acidic soils, all of which describe this location, and having a tough consistency. It will be fun to see if I can learn to identify these. There are lots of different mushroom types on my 2 acres. I just bought the mushroom book because of reading this thread.

@hoosierbanana thanks for the info. According to the link you provided, Hypholoma capnoides can grow on rotting fir logs, which is exactly where those are. I bet you are right. According to the “Mushrooms of the Pacific Northwest”, those are edible and “fairly good”. Now that I looked that up, I also looked up Psilocybe mushrooms. I might have some of those growing there, but I really cant say for certain. No wonder there is so much weirdness in some parts of the Pacific Northwest

I think the red cap are Amanita muscari

Those are not Amanita, Amanita have white dots and ruffles on the trunk. The red caps look like they are from Russula family, the mushrooms from this family have wide range of colors including red. If you look closely you will see that the cups are eaten by slugs, the insects will never eat the poisonous mushrooms.

The white warts are remnants of the universal veil, so not actually attached and can be washed off by rain. The stems do look like they have some texture, but not close enough to really see, the bulbous base is characteristic of Amanitas also.

That is a myth about insects and slugs not eating poisonous mushrooms, they aren’t affected by the same things that we are.

I have never seen them before in person, but did know that there are not many mushrooms that grow on fir so wasn’t hard to guess. Be sure to really research every species and also look alike poisonous species before you eat anything, and also be aware that people can have allergies to individual species of mushroom so always taste a new species cautiously and wait a bit for any reaction.
There’s a saying: “There are old mushroom hunters and there are bold mushroom hunters”.

These might be better photos of a couple, and a newer one. I took them today and included the under side too. They might be too degraded now to identify.

Under Spruce tree, red / orange top. These come up about once a year in the same location. 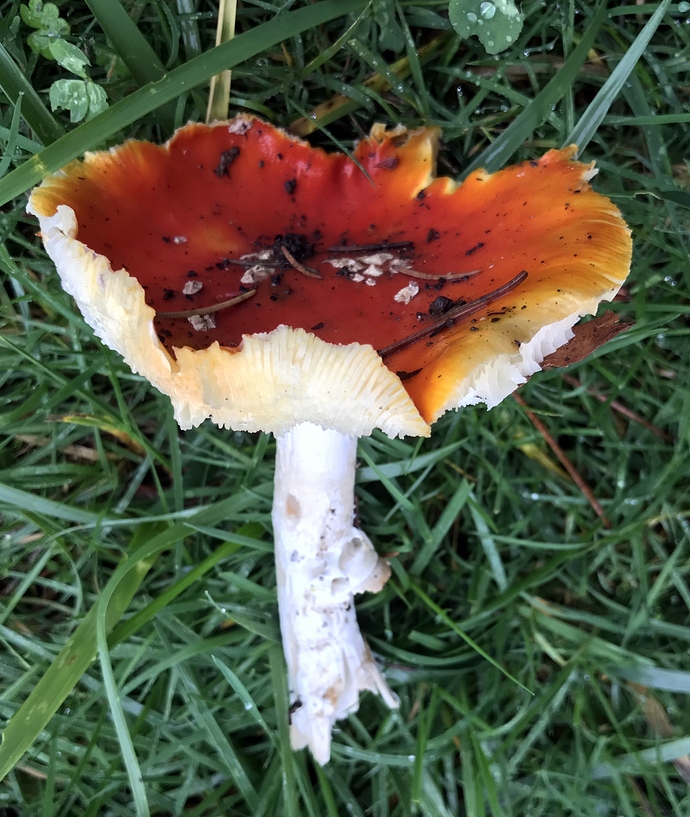 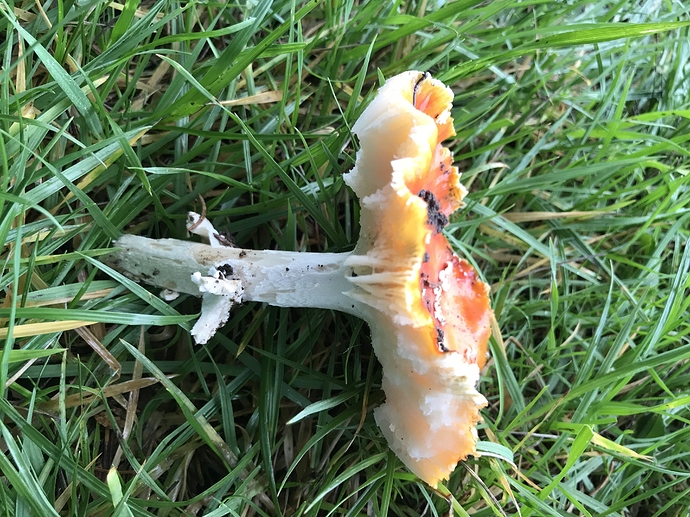 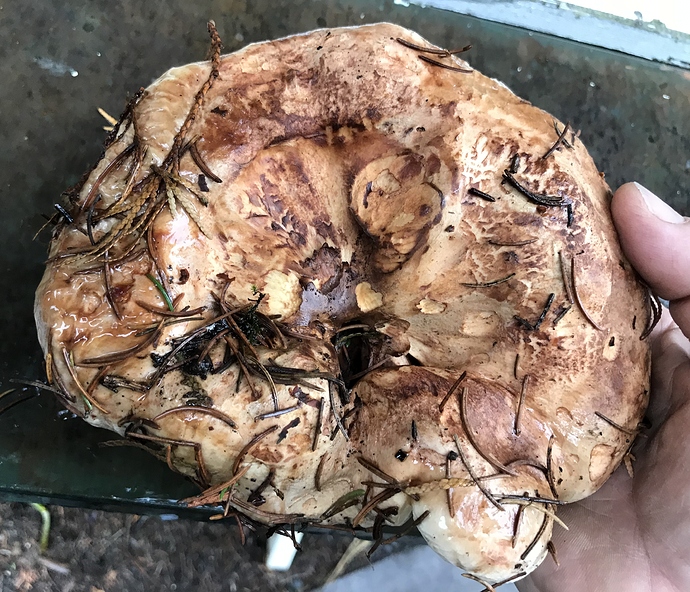 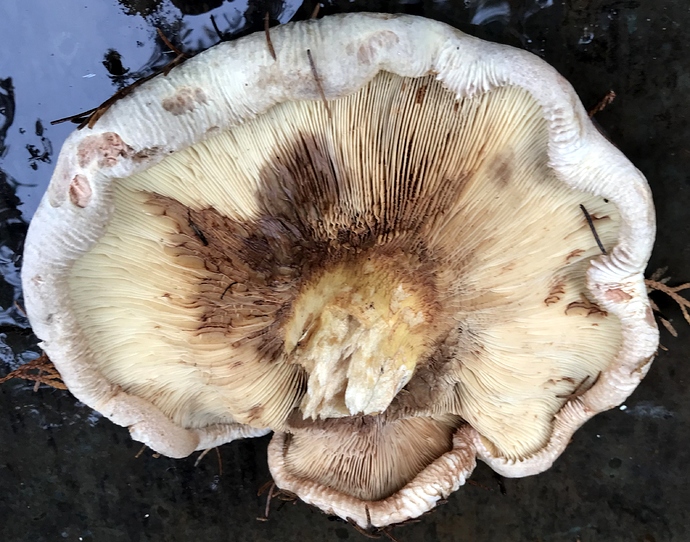 This is under a fir tree. It also smelled like a grocery store mushroom 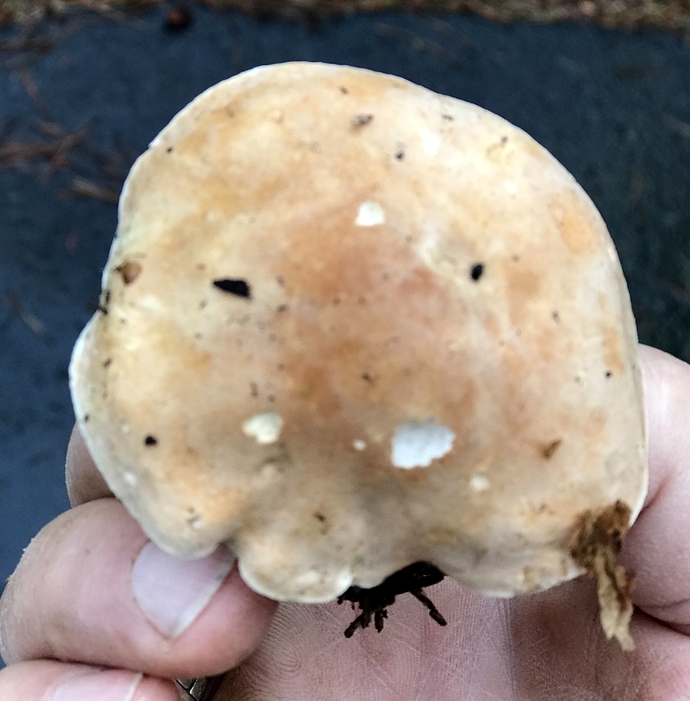 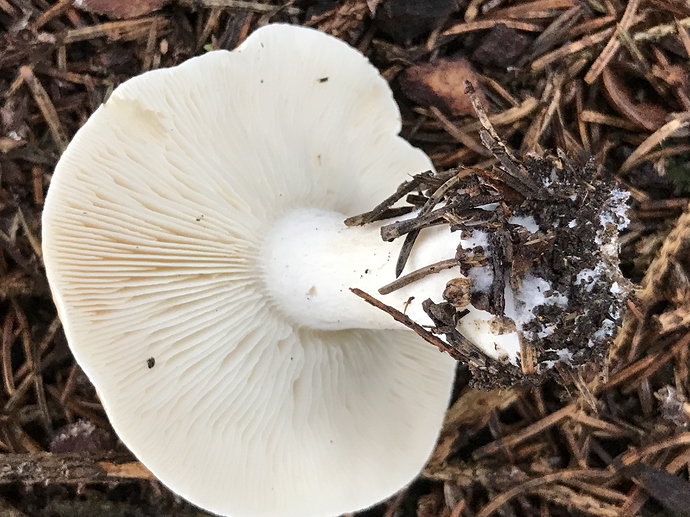 This was on old fir logs. I didn’t smell this one. Same mushroom as the group in the first batch that I posted 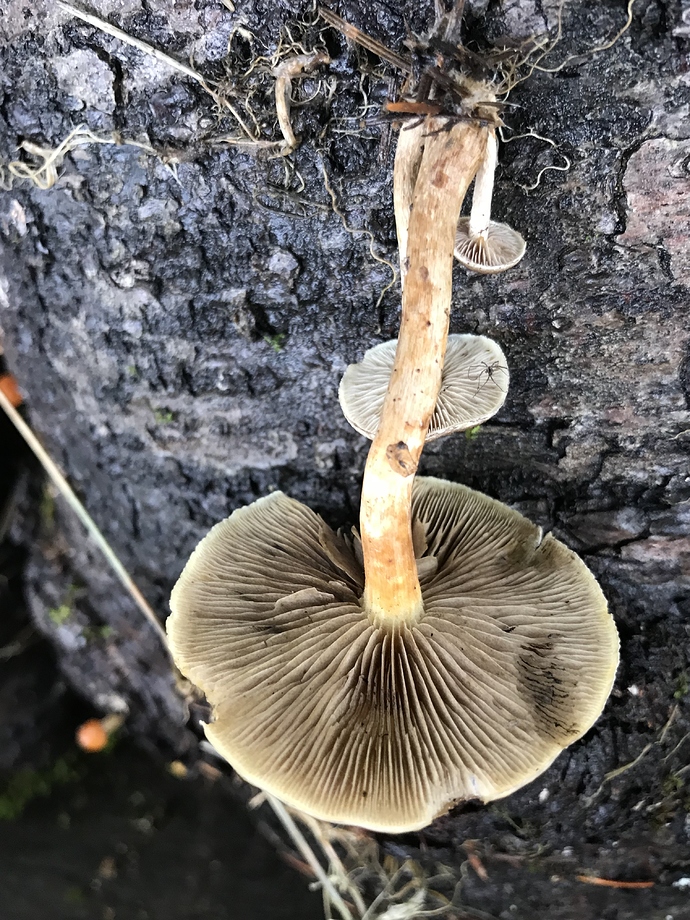 It’s fun reading about them and trying to identify them. I don’t intend to taste them. I did sit them, gill side down, under the same species of trees that didn’t have mushrooms, to see if they might colonize there too.

I got a message from Amazon, the morel spawn I ordered is being shipped.

At the closer look the red cap are Amanita mascari they are just so old that they lost their dots and ruffles. On the second picture is Paxillus involutus it is edible. The good smelling one is from tricholoma family, I think.

I have gathered some chaga for winter tea and chai. The gnarliest looking fungus, it also goes by the name cinder conk. Easy to spot on yellow and paper birch trees now that the leaves have fallen. Extremely high levels of antioxidants, tea has a mild yet rich flavor that goes well with chai spices, a bit of milk and honey.

@Antmary, according to wikipeia, Paxillus involutus was previosly considered edible and widely eaten in Europe but now considered very dangerous, resulting in organ failure and death, even in people who have eaten it for years without problems. It even killed a mycologist. Mushrooms of the Pacific Northwest says the same thing. They are, however, ectomycorhizal so i imagine the benefit the trees. They comment this may be a complex of species and not just one, leading to some confusion. Plus, they accumulate heavy metals, and may produce a carcinogenic substance.

@Bear_with_me, Yes, I was surprised to read it. We always picked and cooked it without any problems. It is very common mushroom in Russia. I guess the it might cause the development the autoimmune responses, if consumed in large quantities.

i got a ton of it in the garage. i powder it and steep it with tea or coffee. good strait too with honey! russians have used it to treat cancer and make a paste to protect cosmoneaughts from radiation. i find it mostly on yellow birch up here riding around during hunting season. gets huge on old growth trees. good stuff.

This was on old fir logs. I didn’t smell this one. Same mushroom as the group in the first batch that I posted

Here’s some old pictures of deadly Galerinas I took, these are the reason it is best to leave “little brown mushrooms” alone. It is difficult to tell their features apart from other LBMs, and they can occur within a fruiting of edible mushrooms and be picked without knowing it… that includes shiitake logs, which can and do have other “weed” mushroom species grow out of them at times. 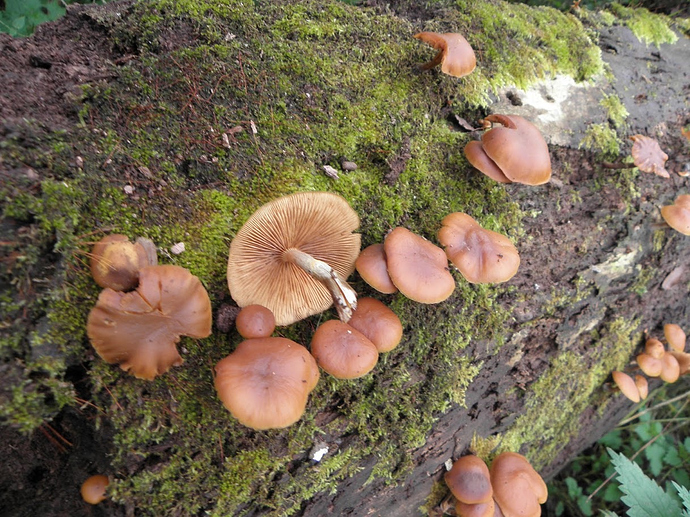 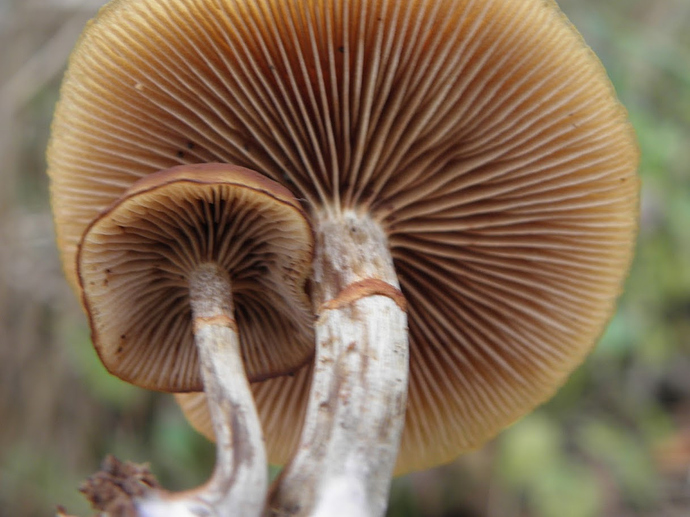 A mushroom commonly eaten in this area is false morel which can be poisonous but usually is considered choice here. It’s to big a chance to take! Here is what is said “Beefsteak and elephant ear mushrooms are in a category of “false morels,” meaning that they resemble and are often mistaken for edible morel mushrooms. Though some of them may be eaten without any negative effects, many false morels contain dangerous toxins and should be avoided. There are characteristics of these mushrooms that make them identifiable in the wild.

Beefsteak or elephant ear are common names for the gyromitra esculenta species of mushroom. They go by other names such as brain mushroom and turban fungus. They are often poisonous false morels that are found on hardwood trees. They are a bracket fungus found in wooded areas in Europe, North America and Australia. It derives its name from its appearance and texture, which resembles beef.

Look for certain characteristics when attempting to identify beefsteak or elephant ear mushrooms in nature. They are of a dark brownish red color and are heavily textured due to a porous surface that resembles a malformed cauliflower. The cap can grow up to six inches wide and the height is usually about four inches. The stem is an off-white color. Older morels will have darker, sometimes blackened ridges. Eating these mushrooms can be seriously detrimental to your health due to the presence of a toxin known as monmethylhydrazine, or MMH.

Avoid touching or eating beefsteaks or elephant ears. For edible mushrooms, stick to supermarkets and farmers’ stands.Elephant ears contain a protein called asparagine and oxalic acid, which cause poisonous reactions to those who eat the plant. Common complaints after digesting elephant ears includes nausea, diarrhea, vomiting, burning of the mouth and throat, and swelling of the eyes or mouth. Families with small children should keep an eye on them in yards that contain elephant ears. Treatment for ingesting elephant ears should occur as soon as possible to prevent serious complications.” - https://www.hunker.com/13404812/how-to-identify-beefsteak-elephant-ear-mushrooms

It just depends who your talking to but some love false morels http://www.mdolla.com/2011/01/10-most-amazing-mushrooms.html?m=1 here is the photo of the mushroom from their website

In Russia all morels are recommended to be boiled before cooking. Exactly they needed to be boiled in the 3 times more water then their volume. The broth is discarded, the mushrooms are supposed to be safe to eat after this. The boiling is for the removal the toxins you mentioned above.

Polk greens are a poisonous plant eaten here prepared the same way. Typically those of us who are part Native American learned to eat these plants from our parents. The water is poured off multiple times to remove some of the toxins. People die from eating this plant sometimes because they know people eat it and are not sure how so they eat it fresh which is very dangerous. No one should eat Polk but we do because we always have. Many mushrooms retain poisons I’m told even after boiling but I’m no expert on those types.

In russian classification of mushrooms there is a group called conditionally eatable mushrooms. It means that in order to be eatable they need to be boiled, dried or soaked for a long period of time to remove toxins or bitterness. As a general rule that my mom always had: if you are not 100% sure that the mushroom will taste right it is better to boil it first. Of cause there are many mushroom that are highly poisonous and the boiling wan’t help. Everyone need to know the highly poisonous mushrooms that grow in the area. The second test is if the mushroom has weird color (bright red, yellow, green, blue) it is likely that it is poisonous, although there are many exceptions from this rule. Smell mushrooms, if they smell unpleasant, they most likely uneatable. if they pass the smell test, you can try a tiny bit of flesh and if it is bitter in taste, leave them too. If the mushrooms passed all three steps you can bring them home and to try to identify them. Only after identification you can try to eat them and the best way is to boil them first just in case.

It’s usually written as poke, not polk. Most non-foragers I know call it pokeweed (Phytolacca americana). We also boil it multiple times discarding the water each time before eating- otherwise it will make you sick. Not many people eat it twice. No one I know has ever really enjoyed it- myself included. Tastes bland and of course it gets mushy with the repeated boiling.

There was a great article on Gyromitra in Fungi magazine not too long ago. It’s eaten widely all over Europe and in parts of North America too. Lots of misinformation out there about it. It has toxins, but they are easily neutralized through proper preparation. As with poke, not sure why people would go to the trouble. I’ll stick with the true morels myself!

Poke is a correct term I pride myself in using most of the time. I’m showing my heritage again by calling it Polk which is not incorrect but it makes it harder to convey what I’m talking about. People from certain areas call it Polk instead of poke as shown by this old song https://en.m.wikipedia.org/wiki/Polk_Salad_Annie. It’s not something I do typically unless I’m tired and then my vocabulary changes without my consent. I don’t like to use the word salad or sallet because people get the wrong idea and associate it with the salad they eat fresh which is deadly at times. For those who want to know more read about it at this link http://nadiasyard.com/our-native-plants/american-pokeweed/.

Strange mushroom I came across today. Kind of looks like upwards growing carrots. 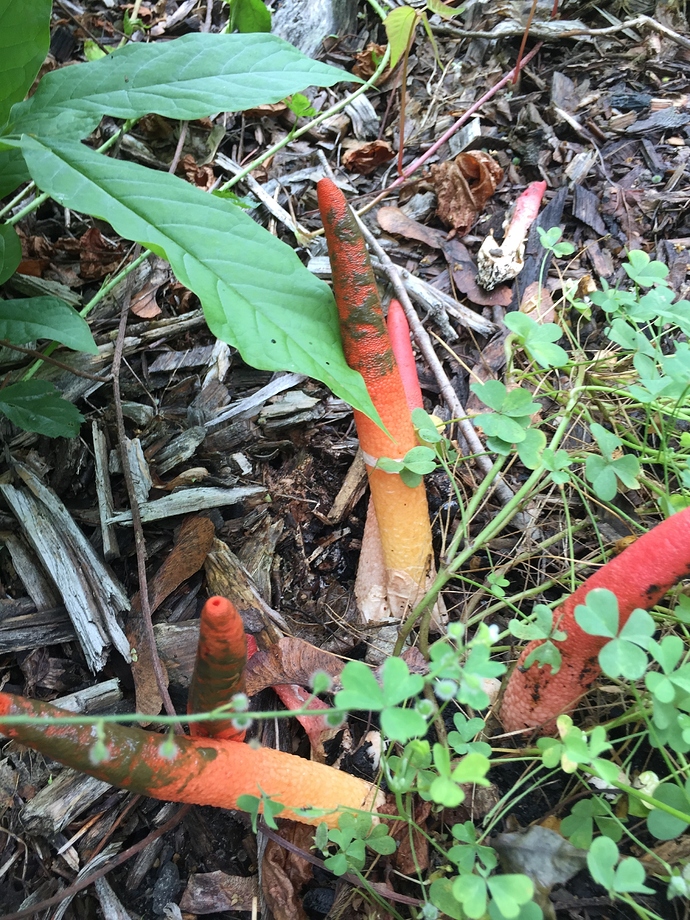