Stinkhorns. Looks and smells like they were dipped in poop.

Dust balls are starting to pop up 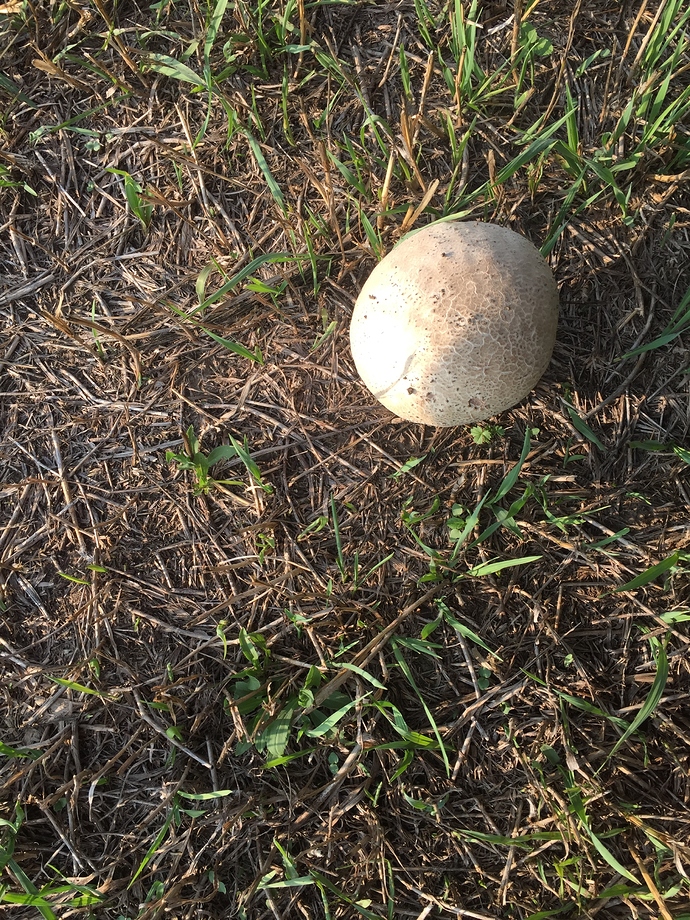 This is an old photo I took in 2016, sorry for the poor quality. It’s all I could find saved. We get buckets of these mushrooms every year. When I first moved in in 2015 and saw the neighbors spending all this time picking and cleaning them I thought they were nuts. Then after they brought over a jar of these prepared (with garlic, onion, tomato, hot pepper, and some oil) I started doing it myself. They’ll be around in a few months, when it gets a little bit cold. It’s kind of a blessing, since it appears that whatever caused these mushrooms to appear killed two large maple trees before I moved in and a third maple tree on the other side of my yard after I moved in (waiting on 'shrooms to appear there). If those trees were around my yard would be terrible for growing fruits and vegetables. 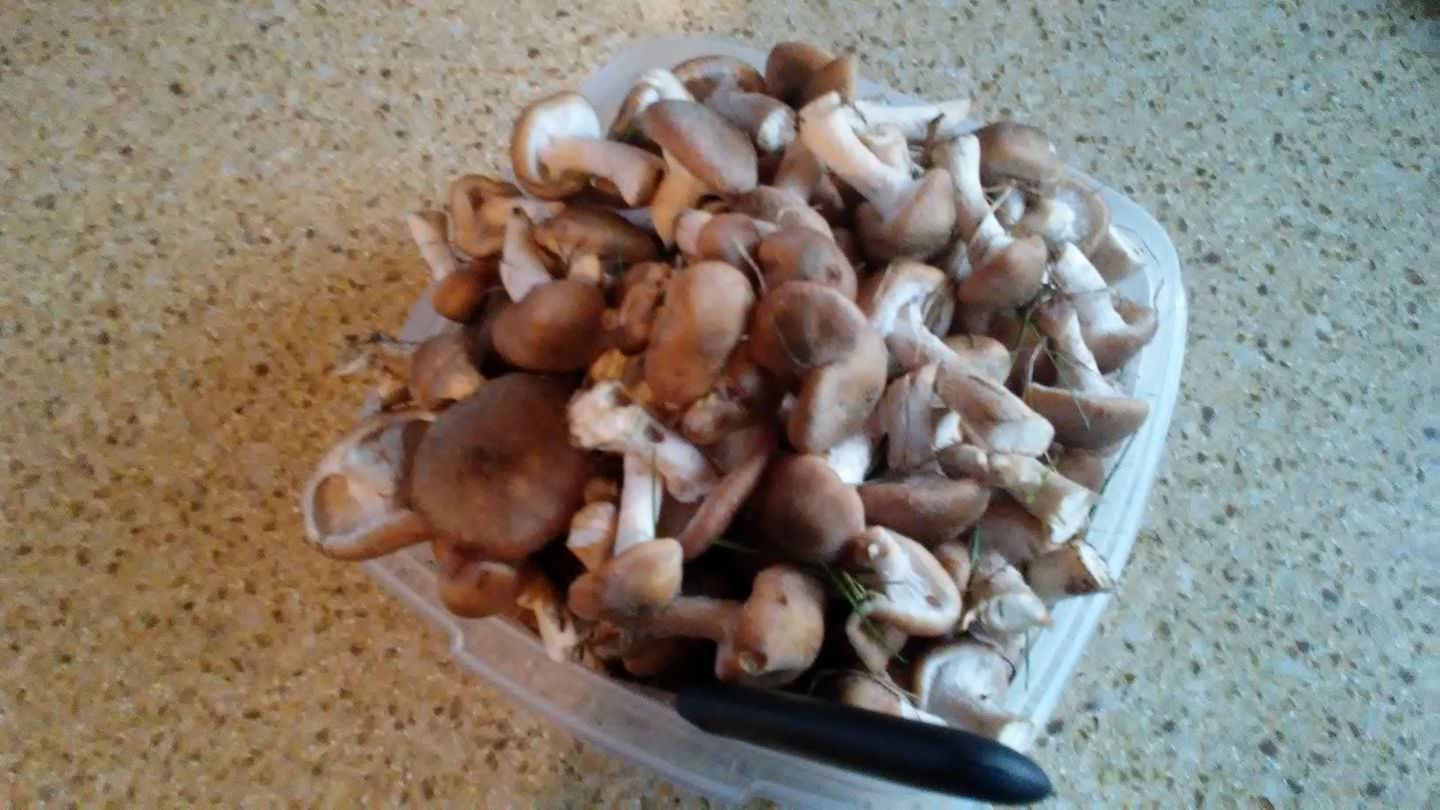 I and my family enjoy poke. I didn’t grow up with it, but my family has eaten it for several years now. Yes, I suppose I’d have to call it mushy, but is cooked spinach (especially from the freezer section at the supermarket) any less mushy? Cooked greens are just generally more or less mushy, it seems to me. I always boil poke about three times just to be safe (which is a lot of trouble, but we enjoy it enough to have continued doing it for several years now, particularly since it comes early in the spring before any of our spring planted greens are ready to harvest), but I know multiple people that grew up eating it that didn’t boil it at all but rather fry the fresh shoots similar to how one might prepare asparagus. One man I know with deep rural roots in the nearby North Carolina mountains/foothills, for example, is about 60 years old now and has eaten it that way his whole life (and continues to eat it.) He says you have to use plenty of lard/pork fat, because the pork fat neutralizes the poisons. My nextdoor neighbor who’s about 70 years old and came from far western North Carolina doesn’t say anything about fat or neutralizing the poison, and she says growing up she always ate the shoots simply fried with cornmeal; she simply says it’s fine to eat so long as it’s collected early in the season. Clark, are you sure the fresh shoots and young leaves are deadly? I’m skeptical of that claim, especially knowing people that eat it without boiling. I’ve read that the root is substantially more poisonous than the leaves, but to the degree that the fresh early spring shoots and leaves are poisonous at all, it’s hard to believe they’re deadly poisonous. It seems there are a lot of dubious scare stories associated with wild foods. Some are probably quite accurate but a lot of them surely aren’t, it seems to me anyways.

@clarkinks, you know puffballs (at least some of them) are supposed to be fairly good edibles if collected while the flesh is still firm and white, right? I remember seeing lots of nice size ones in years past, but since I learned they were edible I haven’t found enough of any size to have been worth trying them yet, so I can’t speak from personal experience.

Looks like the infamous honey mushroom, aka armillaria root rot. It is good you pick them before they release spores because they can attack fruit trees also. If you come across maple roots when planting it might be a good idea to dig up as much of them as you can because the live fungus in those roots can infect other trees also. Or plant resistant species in the area.

@cousinfloyd Polk sallet can definitely be deadly https://www.saveur.com/poke-sallet. My family eats it frequently in large amounts in the spring. My grandma always said it was better flavored with pork and they used the same bacon in spinach, lambs quarter etc. which is just a southern traditional dish but not a requirement. Boiling the water twice and dumping it each time , never eating Polk when it’s large, never eating it harvested from places close to civilization etc. are all important things. This article is accurate https://southernspaces.org/2011/mess-poke which quotes another less than reputable source but the point is still true “ The eating of limited quantities of poke, perhaps of the shoots, may cause retching or vomiting after two hours or more. These signs may be followed by dyspnea, perspiration, spasms, severe purging, prostration, tremors, watery diarrhea and vomiting (sometimes bloody) and, sometimes, convulsions. In severe poisonings, symptoms are weakness, excessive yawning, slowed breathing, fast heartbeat, dizziness, and possibly seizures, coma and death.“.
Some people think I have not eaten it or would not eat it because I say it’s poisonous but rather I’m just stating facts not giving advice. Lots of people eat poke weed http://www.eattheweeds.com/can-be-deadly-but-oh-so-delicious-pokeweed-2/. Missouri has deaths from time to time so they mention the weed in poison control information http://missouripoisoncenter.org/bites-snakes-plants-oh/. They also mention one of our favorite plants tomatoes which we all know is a nightshade. Once the tomato fruit is ripe it’s delicious but leaves etc are poison. Even green tomato in large quantity might upset the stomach. We love fried green tomatoes!

Going to try to eat some puffballs this year so I’m looking through my books and making sure there are no look alikes now that I know the season started https://en.m.wikipedia.org/wiki/Puffball

I like poke and eat it often
I have got severly I’ll from eating it once.
Notably one year I was really liking eating it and ate a batch that was more than a foot tall with red showing on the stalk.
That taught me !
Was sick for more than a day.
So I don’t recommend eating it when it is showing red.
Eat it when very short and young.

Oh wow. The neighbor grew up poor in Italy and just knows a good mushroom when he sees it since he did that for money when he was a kid (in Italy…). He had no idea what it was other than a “button mushroom”. From memory, when I tried to identify the mushroom myself the website described it as something that specifically attacked maple trees. I remember it noting that it can affect some huge contiguous areas, the largest known of which is in Michigan IIRC.

The mushrooms come up all over the area we’re planning to put the apple and pears in (full sun!). Also, the neighbor has a healthy Bartlett/Bartlett type pear growing right near where the mushrooms come up. He also has some very young apple trees (Macoun and Braeburn) that are loaded with cedar apple rust, though one is worse than the other. These young apple trees are right in the middle of the area the mushrooms come up from. He doesn’t spray, the only chemical he uses is sevin which he puts on his eggplant shortly after it goes into the ground. This neighbor has a towering arborvitae hedge (I’d guess 60 feet tall) behind his house. There is a small native cedar tree in a different neighbor’s yard.

I’m pretty sure this is the one, “honey mushroom”. This is how they look. Very few are coming up on the stumps, it’s coming up in the grass. From the roots that are rotting, I’m sure.

We clean them and boil them before using. We mostly eat them fried (with peppers, garlic, and tomato just like the neighbor taught us) as a side dish, but sometimes we put it into soups or Korean noodles.

I was in the italian Alps about ten days ago. Lots of chanterelles, porcini, and parasol. But I forgot to take pics! Specially one table covered with 'rooms after a group sortie. Anyhow, they were good.

got some shrooms growing thru the mulch around my serrano pepper plant. have no idea whether they’re toxic (hepatotoxic? neurotoxic?), so ain’t eating them, merely pulling them out.

first time i’ve seen any shrooms in my garden.

Lots of these fungi in the fields this year after the rain. I do not know what they are. 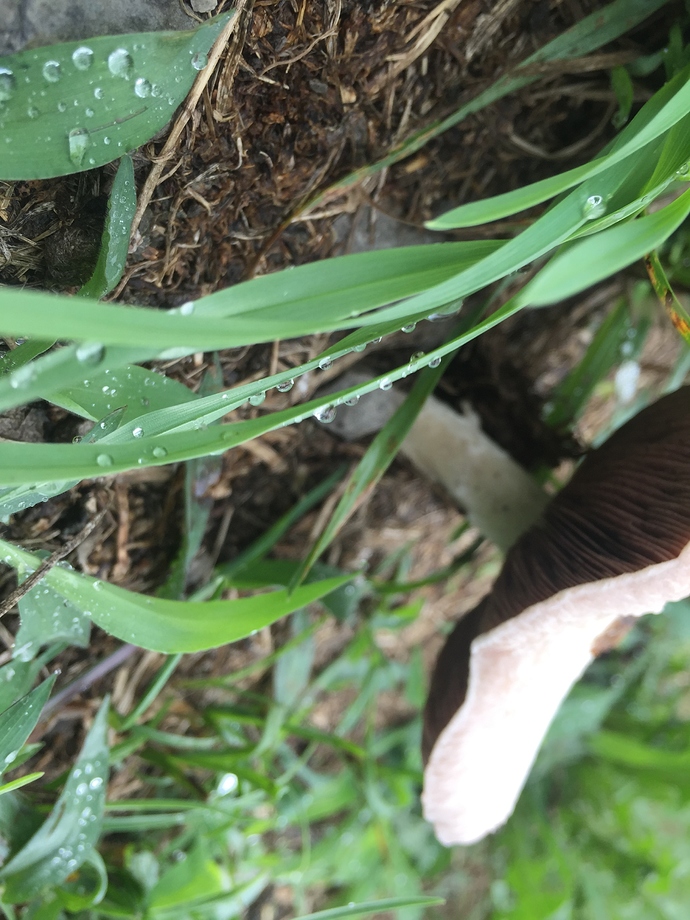 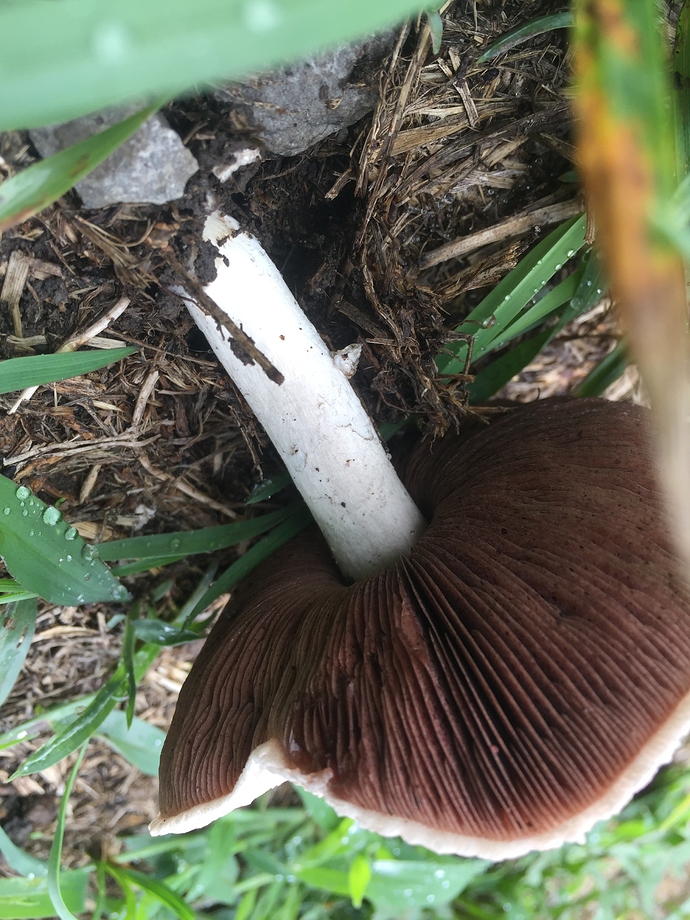 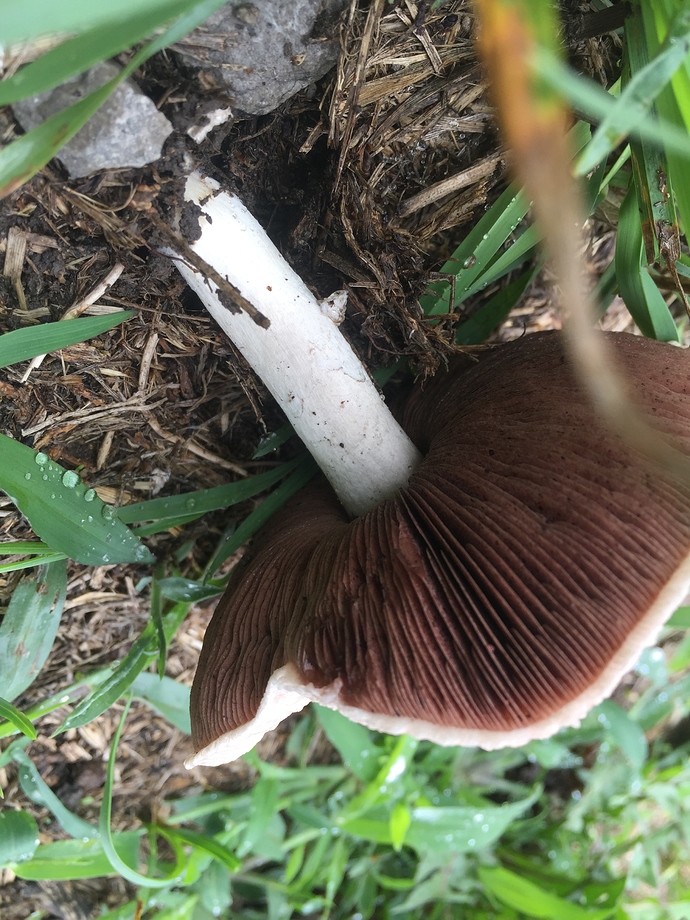 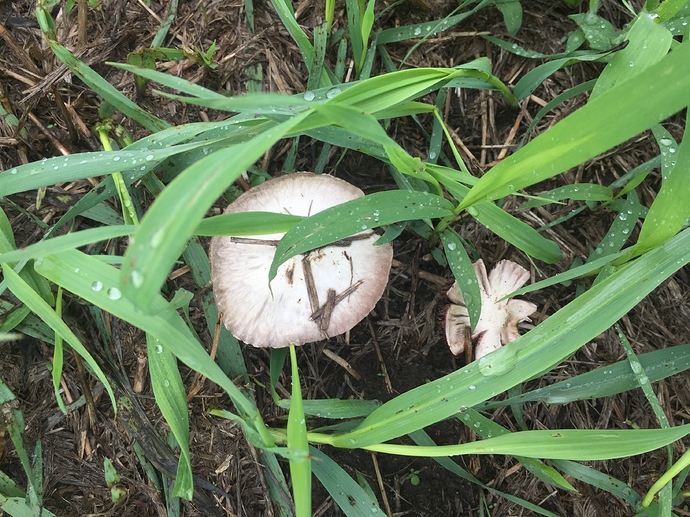 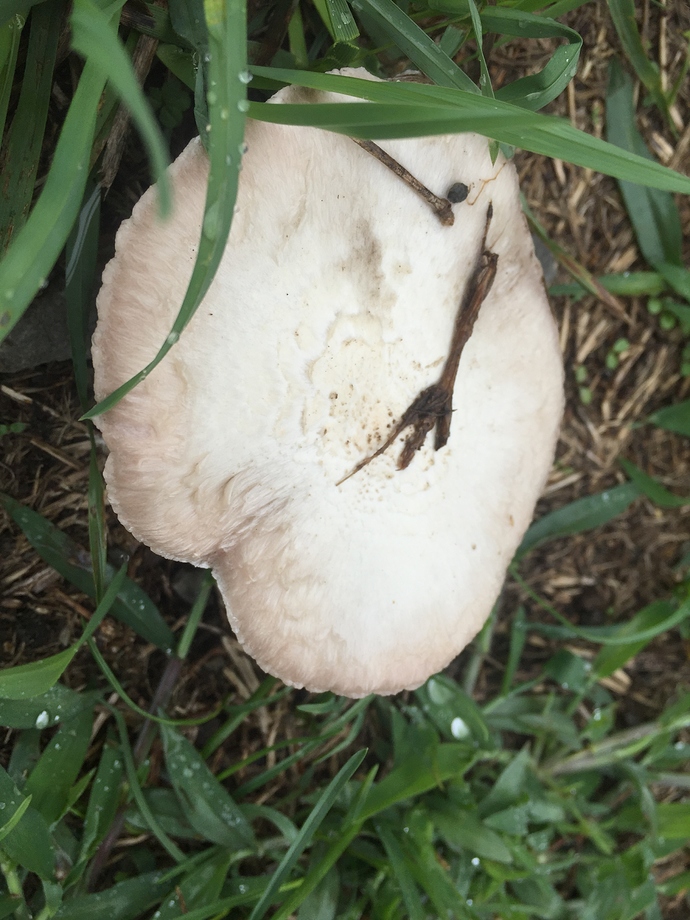 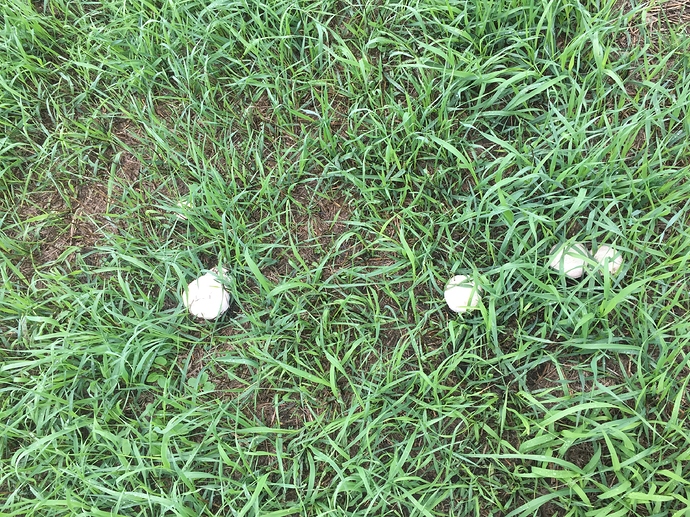 I had a few giant puffballs in my yard last year and was going to eat them, but I punted at the last minute. This year I think I’ll go for it.

look like meadow mushrooms. my neighbors lawn has a big flush of huge horse mushrooms every sept. makes the best stuffed mushrooms. i chop up the stems and mix with compost. I’ve planted them in the wet spots on my lawn in hopes of getting my own patch. hopefully i see some pop up this sept.

was riding the atv trail today. tons of king boletes everywhere but were just past prime. nice big ones too!

I’m not confident enough to eat them yet. There are hundreds of them! 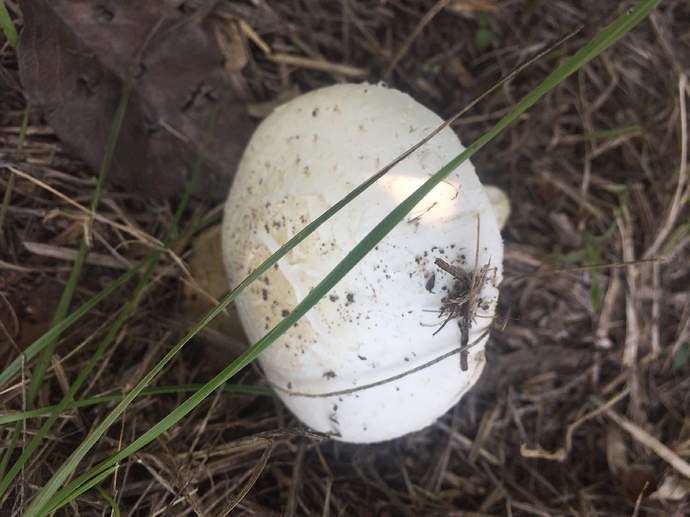 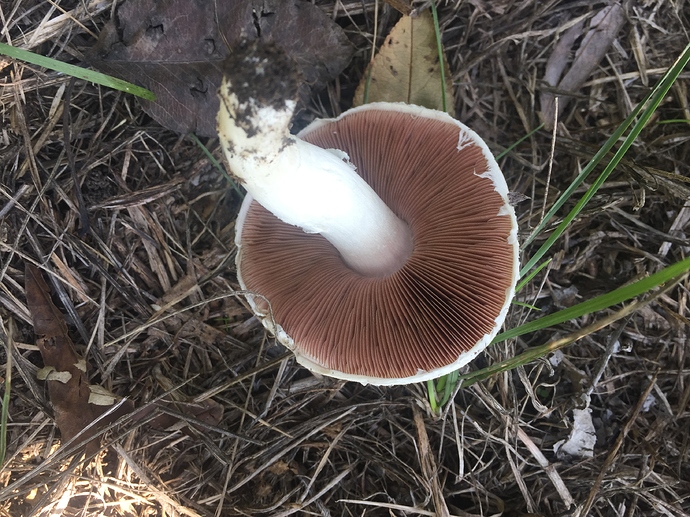 they are related to button mushrooms but taste better. take a spore print on white paper . should be beige to sandy brown for meadow mushrooms .

Do I need to just lay it on the paper or cut it?

tear the stem off then place the cap, gills down on the paper. i put a bowl over it and let sit for about 4hrs, then check it. try to get one thats still got some curve on the cap.