I did have birds building a nest in mine and the cats tore down some grapes trying to get to the nest. The nest is empty!

Are the grapes too large for birds to eat?

do you use bird netting?

I used bird netting one year but it was more trouble than I’m willing to do.

@Auburn So you harvested grapes without netting?

I have harvested without netting but one year either raccoons or opossums ate a large portion of one vine.

I live in a subdivision where the houses are pretty close together and deer don’t visit my orchard or vines.

I think birds may pick at them but they don’t eat many or cause much havoc with the vines. Raccoons and possums are probably the worst offenders and my dogs seem to keep them at bay. I don’t have deer problems either most likely because of the dogs. I may not have bird problems either because of the cats. I guess that is pretty much why I feed so many animals. Maybe I should just skip answering this question!!

@Auburn and @k8tpayaso
Bill and Katy - I am going to take your advice and stake and prune my ‘Scuppernongs’ as you have suggested. Katy, I just saw your May 7 photos. Lovely!

I have a very elderly Mennonite neighbor who is a Salt of the Earth type guy . . . (made the cedar shakes on his house that he built himself, back in the 1940s, from the cedar trees he cut and milled - from the swamp that surrounds our properties!) He did not use horizontal wires . . . but more of a square, sort of Japanese looking, support. He made it out of 4 salt treated, very thick uprights. And then cross-beams on top. (Like the slatted ‘things’ that people build on their decks.)
You could stand underneath, in the shade of the grape vines, and pick the grapes. I believe he planted a vine at the base of each upright. It was beautiful - a work of art!

That is what I was shooting for - but need to find someone to build it for me.

I found the records on my vines - and there are 2 varieties. Both self-fertile. Two are ‘Carlos Bronze’ and the other is also a bronze - but not ‘named’.

The Japanese beetles have arrived - and I hate to spray, because of the pollinators . . . so I put out some traps with lures. Hope this helps. I used to use them, but quit because of the STINK!

This is the longest thread! I’m sure I missed some great posts. 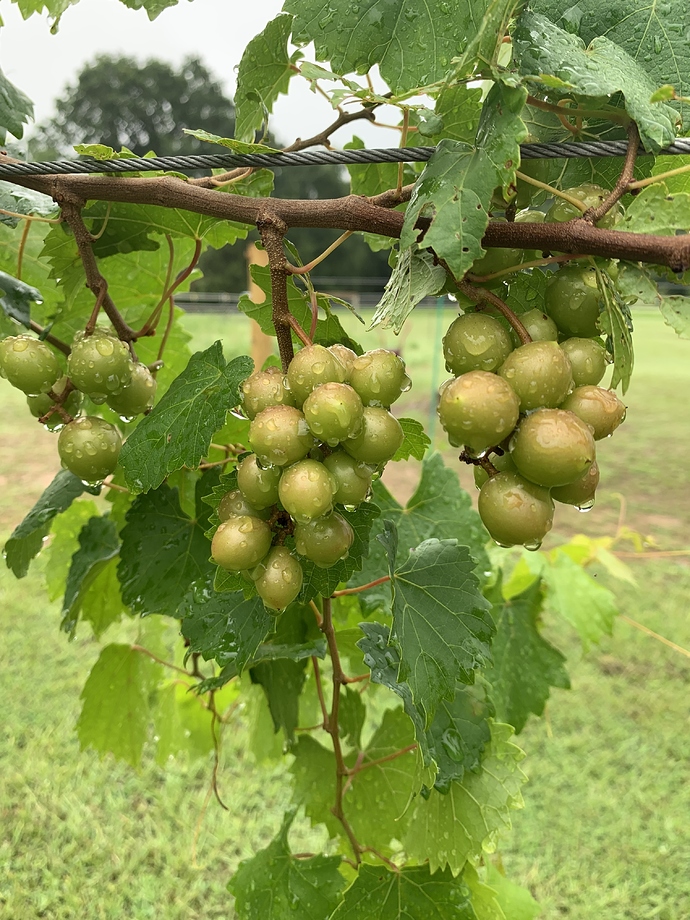 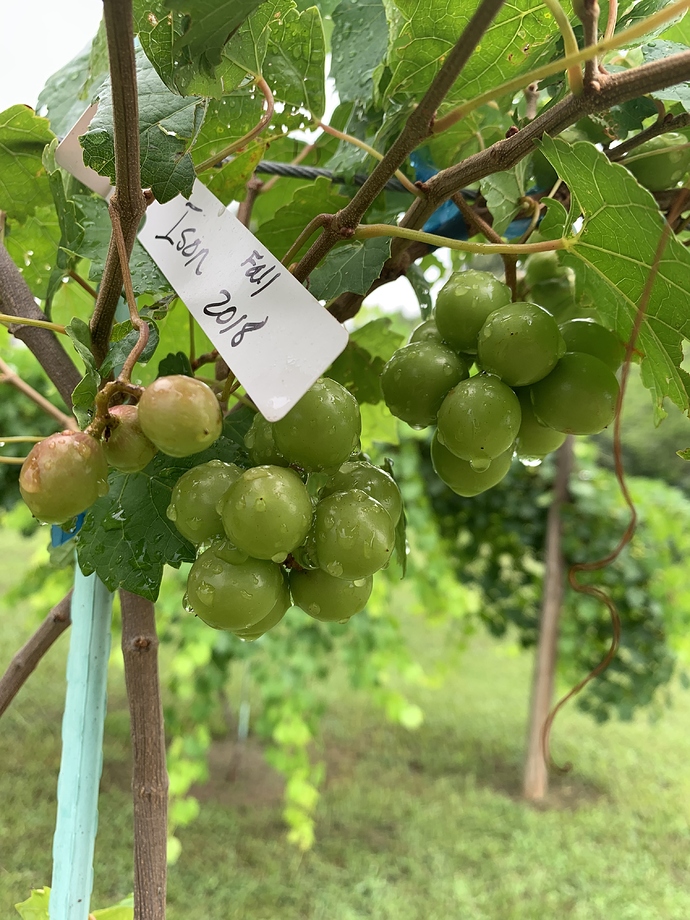 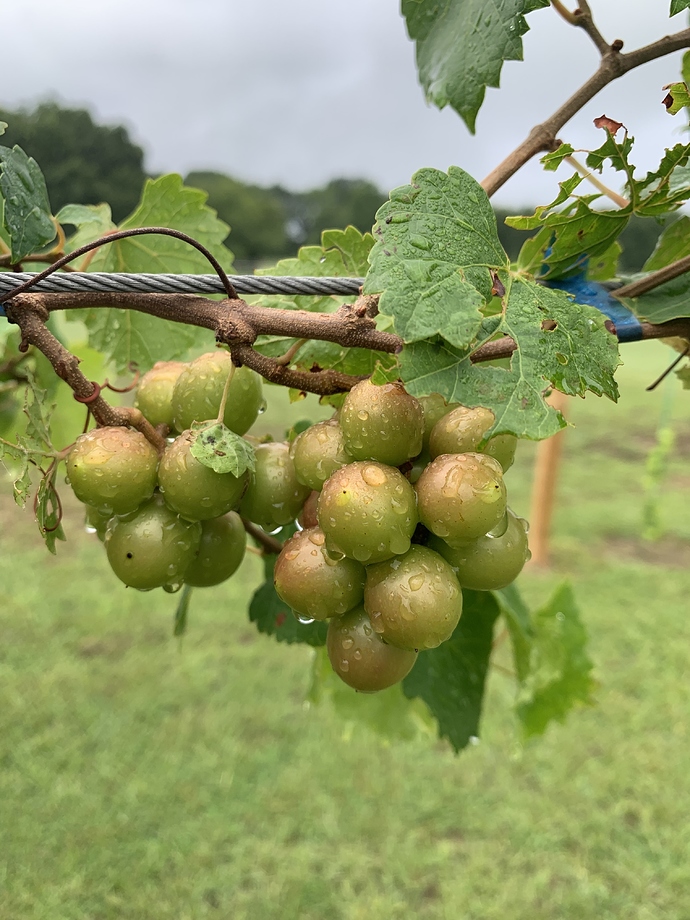 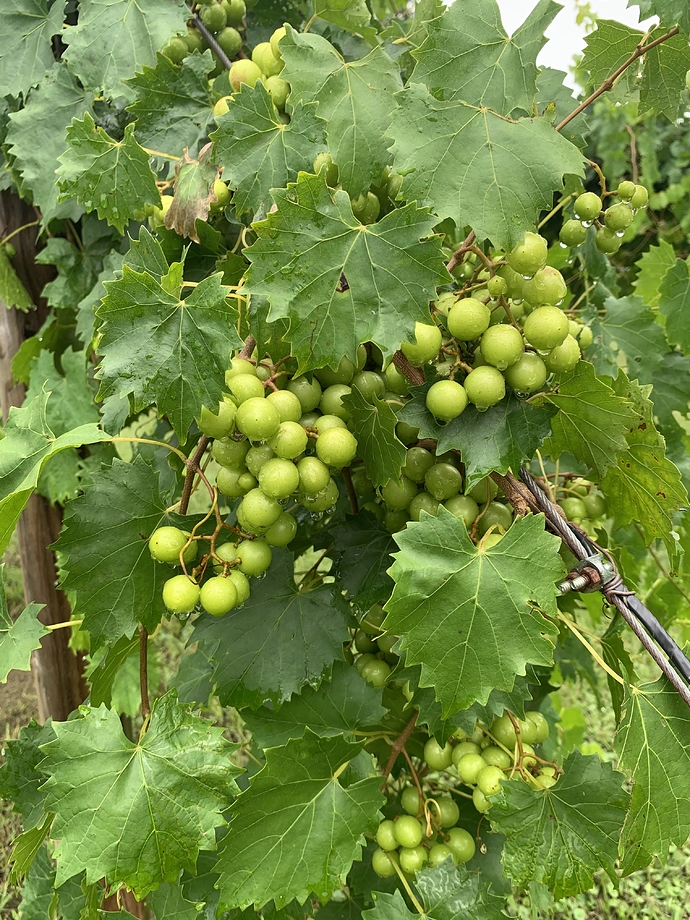 Most of mine are loaded this year. Even Darlene has a few clusters.

They look great and ahead of the ones I have. Starting out with a two year old vine and fall planting in my opinion is a great way to get the vines fruiting fast.

I have some others though planted at the same time that don’t look nearly so good. You get a nice plant and that makes a big difference. It was down the wire when planted! I’ve had a lot of fungus type stuff this year with all the rain.

Of all the muscadines I’ve grown, I marginally give the nod to Ison as the best of the bunch. The reason is that it is a carefree vine with excellent production and few problems. I also enjoy the flavor. There are a few negatives such as size.

I have 3 vines fruiting for the first time from seed. One of them looks outstanding. All three were grown from Big Red seed and Ison is likely the pollen parent.

I haven’t ever tasted it. It’s recommended a lot and this is the only one I have. It’s growth has been fantastic.

So being a newbie with muscadine vines, are these close to being ready to pick? If they are still developing, are these 50% of the way there? More/Less?

K8T’s pics are of 75% to 80% mature grapes. They still have to get a bit larger and turn dark blue/black while sugar accumulates. I’d estimate she will be eating fruit in about 5 or 6 weeks.

K8T, there is a small amount of chlorosis in the leaves on one of the pics. I highly advise giving them some extra fertilizer with nitrogen. Ison is similar to Supreme in overloading with fruit which then stresses the vine so that it is may die over winter. Adding fertilizer boosts growth of the laterals which generally prevents the problem.

OKAY, guys…I LIED!!! The more I got to thinking about it the more I felt like I was wrong!! So I checked my Ison’s orders. Mislabeled… that plant was planted late March in 2018!! It is side by side on the trellis with the ones I ordered and planted in the fall 2018 but that vine grew all summer last year. Well…it suffered in the drought here all summer … I’m so upset that I misrepresented it. However I am still very proud of it!!!

@chadspur, i guess my vines heard ya! Trimmed this one off as it was on a future cordon