Anyone growing the Ayer pear? Its not the same pear as Ayers 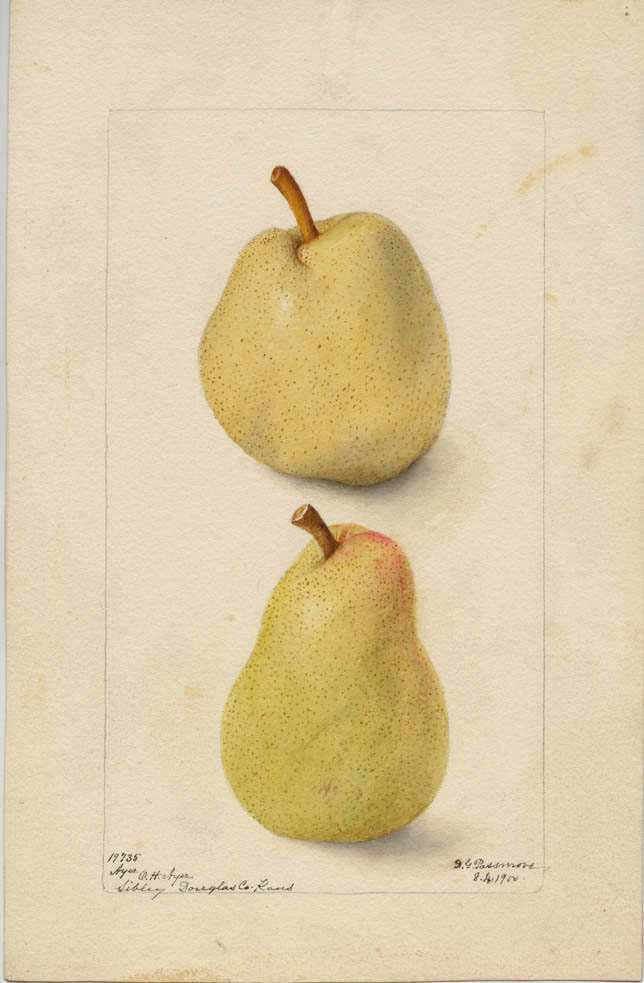 Properly Identifying the Tenn. AYRES Pear
The easiest pears to graft - pear interstems
Ayers pear!
Question the History of a pear or know some history? Post it here!
clarkinks March 28, 2017, 5:31am #2

Raised as a Kieffer seedling by O.H. Ayer, of Lawrence, Kansas. First propagated in 1907. Believed a cross of Kieffer and Duchesse d’Angouleme. Fruit resembles Kieffer in form but inclined to be smaller in size. Skin greenish-yellow in color, reasonably free of blemish. Flesh fairly tender, quite juicy, not very gritty. Sprightly, pleasing flavor, although at times fairly acid. Superior to Kieffer in dessert quality. Midseason. Tree fairly vigorous, productive, highly blight resistant. - H. Hartman, 1957.
In regions where blight and heat make pear-growing precarious, and pears with oriental blood, as Kieffer, Garber and Le Conte, must be grown, Douglas, which belongs with the pears just named, might well be tried. It is better in flavor than any other variety of its class, The trees come in bearing remarkably early, and are as productive as those of Kieffer, though hardly as large or vigorous. The trees are inclined to overbear, in which case the fruits run small. The variety has little to recommend it, but those who grow Kieffer might put it on probation with the hope of growing a fruit passably fair for dessert. Douglas is a seedling of Kieffer crossed, it is believed, with Duchesse d’Angouleme by O. H. Ayer, Lawrence, Kansas, about 1897. Tree medium in size and vigor, upright, very produc-tive; trunk slender, smooth ; branches slender, dull brownish-red. Leaves 3 1/4 inches long, 1 1/2 inches wide, thick ; apex taper-pointed ; margin glandless, finely and shallowly serrate; petiole 1 5/8 inches long. Flowers 1 1/4 inches across, white or occasionally with a faint tinge of pink, 11 or 12 buds in a cluster. Fruit matures in October; large, 3 1/4 inches long, 2 3/4 inches wide, obovate-pyriform, tapering at both ends like the Kieffer; stem 1 5/8 inches long, slender; cavity deep, narrow, compressed, often lipped; calyx small, partly open; basin furrowed; skin thick, tough; color pale yellow, heavily dotted arid sometimes flecked with russet dots numerous, small, light russet or greenish; flesh tinged with yellow, firm but tender, granular, very juicy, sweet yet with an invigorating flavor; quality good; core closed, axile; calyx tube short, wide; seeds long, plump, acute. – U.P. Hedrick, The Pears of New York, 1921. 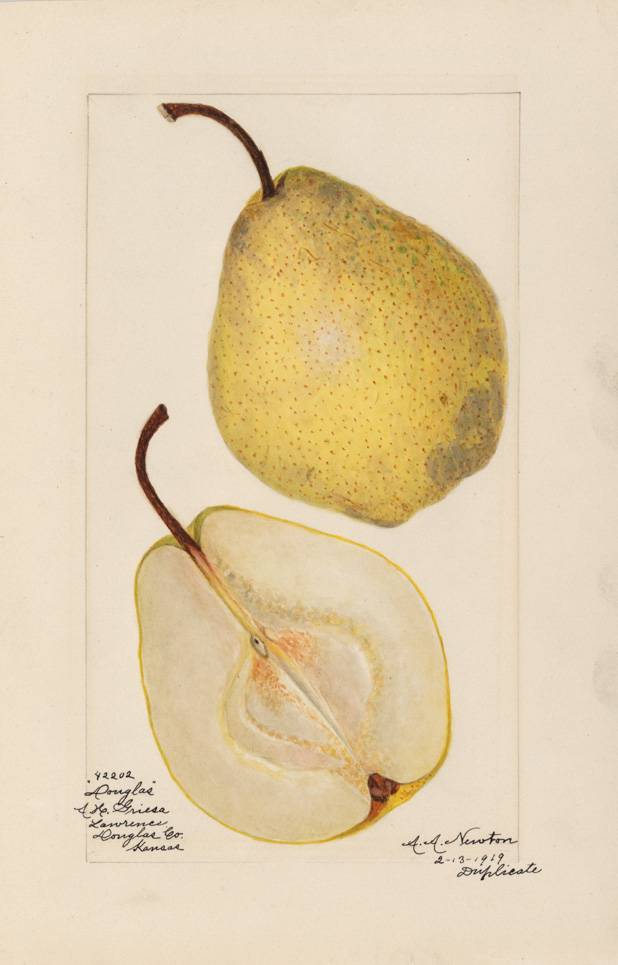 Corvallis makes growing these old varities possible. If not for their excellent program pictures and scions could not even be found in this case. The information about these varities is hardly mentioned elsewhere.

Why isn’t everyone growing Ayer? Since O.H. Ayer apparently lived in both Douglas & Sibly county Kansas I would guess there was at one time many other unknown cultivars with similar growth and form which were lost to time. This guy raised rows of pears. Perhaps it will lack the flavor of comice but I’m not convinced anyone has tested this variety in Kansas for awhile now which might change everything. In my experience Kansas grows good pears for lots of reasons with the hot Sun and relatively long growing season (MARCH-NOVEMBER) being very important.

Wanted to give an update on my research. Found a catalog in the archives
"AYER — Originated about thirty years
ago, as a chance seedling, on the farm
of O. H. Ayer, Douglas County, Kans.
Rather slow, upright grower, similar to
Bartlett, but the foliage is like Seckel.
Mr. Ayer thinks it is a seedling of
Seckel, as a tree of this variety stood
only a few rods distant from where the
original Ayer tree first appeared. Form
obovate; size medium to large, slope
gradual, with color greenish or pale
lemon with light scarlet blush on ex-
posed side covered with russet dots;
flesh yellowish white; fine grain, but-
tery, melting, juicy. Mild sub-acid,
rich and fine. So far the tree has
shown no tendency to blight, and we
believe this is a pear of special merit
for the Middle West. Season last of
July and first of August; two weeks
earlier than Bartlett.

INCE — ^We give here descriptions of Ince
and Estella pear just as given us by
A. W. Ayer, son of O. H. Ayer, orig-

inator of Ayer, Ince and Estella pears.
The Ince pear started from seed about
16 years ago on my father’s place. It
is one of many trees that father and
myself gathered from under pear trees,
where they came up from fruit of the
previous year. We set them in nurs-
ery rows and here the Ince pear, when
but a small tree, began to bear and
early gave evidence of having many
good Qualities. We therefore began to
propagate from it. We have found it
to be a very young bearer, beginning
to fruit at times the second year; very
prolific, bearing almost every year and
over-loading most years. It seems to be
blight-proof thus far. The fruit is good
sized and a bright yellow with an occa-
sional red blush, handsome and showy,
melting and delicious in its season,
which is about the last of October.

ESTELLA — The Estella is also a pear
started from seed on my father’s farm
under about the same conditions as the
Ince pear. It early gave evidence of
being a good pear. It is a very thrifty
sturdy-growing tree and thus far has
shown no signs of blight. Its fruit is
about the same size of the Bartlett; is
very dark green until almost ripe, when
it gets somewhat yellow; is a very de-
licious eating pear, the flesh being rich
flavored, melting and creamy colored;
has no grain, core hardly noticeable,
few seeds — altogether a most excellent
pear. Season about the last of Sep-
tember. A. W. AYER. " - https://www.google.com/url?sa=t&source=web&rct=j&url=https://archive.org/stream/CAT31295172/CAT31295172_djvu.txt&ved=0ahUKEwjOr-DggfnSAhWBqiwKHThlAIAQFghAMAU&usg=AFQjCNGXtazLshi7rvFVbRAwMpjOdic43w

I’m not sure if this is the same Estella https://npgsweb.ars-grin.gov/gringlobal/accessiondetail.aspx?1436645
But it would be consistent with pears he was breeding at the time which were kieffer crosses . The Ince pear appears to be completely lost unfortunately. I suspect as mentioned many other valuable pears were produced and lost after O. H. Ayers death. A. W. Ayer appeared to not continue breeding pears. It appears O.H. Ayer died in 1904 an avid nursery man and beekeeper https://www.newspapers.com/newspage/59714201/. His farm was 6 miles outside Lawrence so it’s possible old farms in that area may still have some of these trees growing. No doubt his family is still located in the area. This is what the article says

Clark, you seem to know your Kansas fruit! I’m kind of into Kansas (and KS history) and your posts have me thinking about fruit here. Do you have a compilation of your research, or is there a history of KS fruit type of webpage out there? I would love to start growing some fruit that has a history here, and to know that background would be cool too.

Catscratch,
I picked up things here and there. Stayman winesap http://www.treesofantiquity.com/index.php?main_page=product_info&products_id=125 might be an interesting apple if you want an apple grown in Kansas as an example. Definitely do my research to better understand the growers. Ayer was straight forward with his intentions and the world loses something when those guys are no longer around.

I have some reading to do (when I get time…). I’ve heard of Ayer and Winesap but never new their history to KS.

I grow Ayers and it looks nothing like those pics, and it’s also a quality
“dessert” pear.

The names being so close causes confusion . I have Ayers . I have seen it listed as self fruitful , pollen sterile , zone 5 and hardy to -50 . No idea which of these are true .

Ray,
I’m glad you brought up the ayers pear for comparison and I do grow it for the same reasons you do. It’s said to be an excellent pear though I’ve never eaten any fruit off my tree yet. My tree is fairly young. Here is a brief history on ayers and other classic southern pears http://aggie-horticulture.tamu.edu/newsletters/hortupdate/2010/apr/pears.html

Ayers has been reported to be self-sterile, requiring a pollinator.

This makes no sense, and I disagree with many of the comments made
about Maxine, Pineapple, and Moonglow. Don’t believe everything you
read, especially these comments.

Wanted to make a note regarding ayer pear - its proved highly difficult to graft on callery with some grafts failing right away and others delayed but all failed eventually. For those grafting this one in the future try to use an interstem of something easier to graft like douglas, clara frijs, small yellow pear etc…

The joke was on me on ayers i had eaten fruit off of ayers for 20 + years but was sold to me as red bartlett. Ayer did not take on any of the callery i tried it on long term. I will need to try again.

2021 was good for ayers. Yes same tree as in so many of the pictures I take. Ayers produces hundreds and hundreds of pounds on a good year like this. Ayer unfortunately was incompatible in all cases where I grafted it. Still I don’t have an Ayer. Many were delayed failures. I happen to know the breeder of Douglas was also the breeder of Ayer he just moved to Lawrence when he developed the Douglas pear. So you might wonder what my plan is to grow Ayer and what I plan to do is use Douglas as an interstem. If you are searching for ayers these pictures are ayers but not my goal when i made this post. I hope to post a harvest of Ayer at some point. 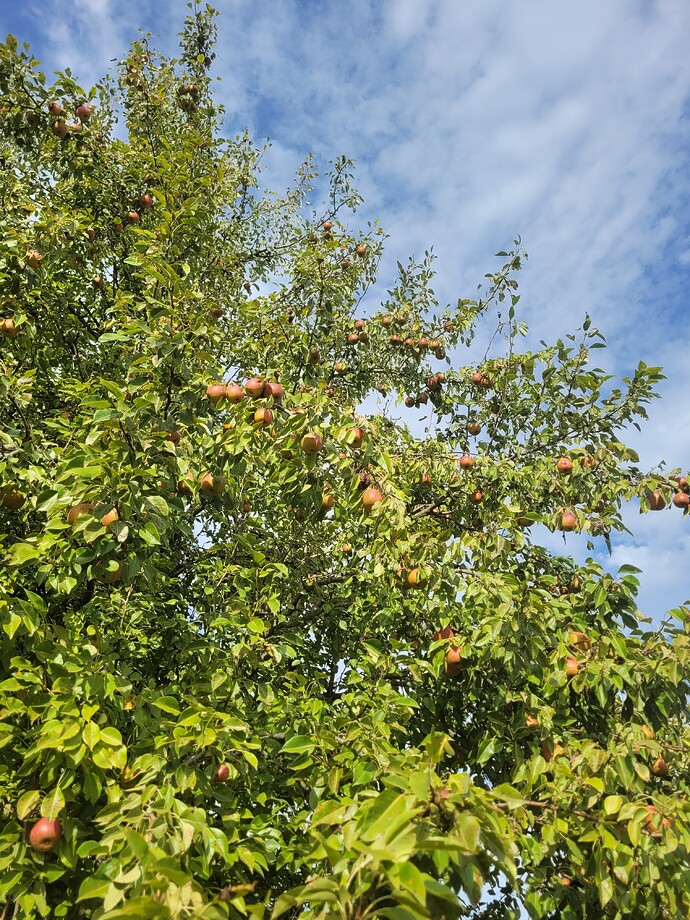 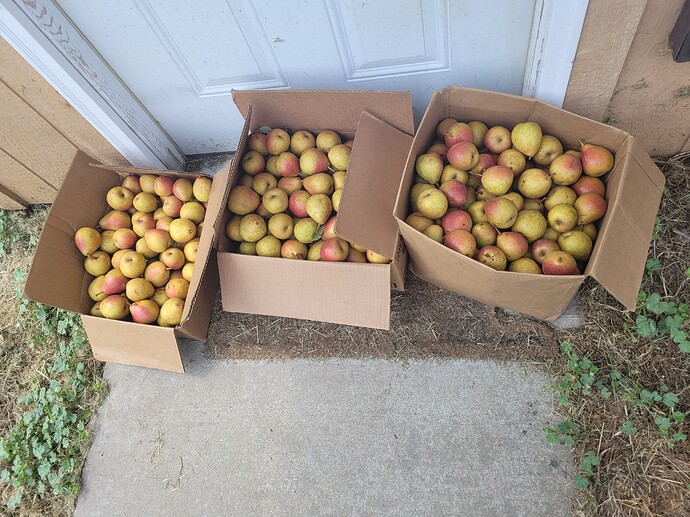 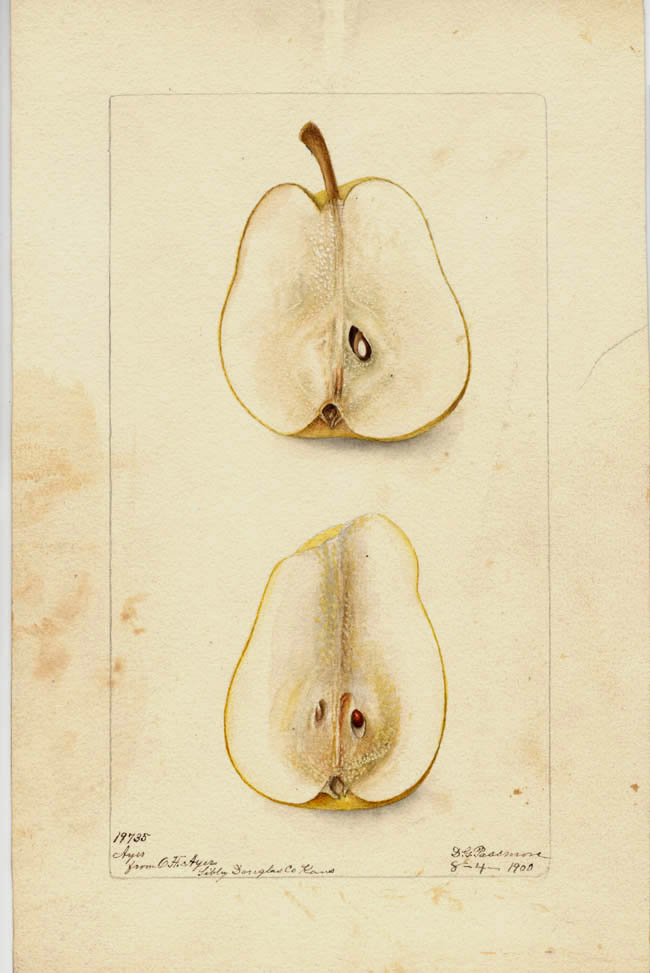 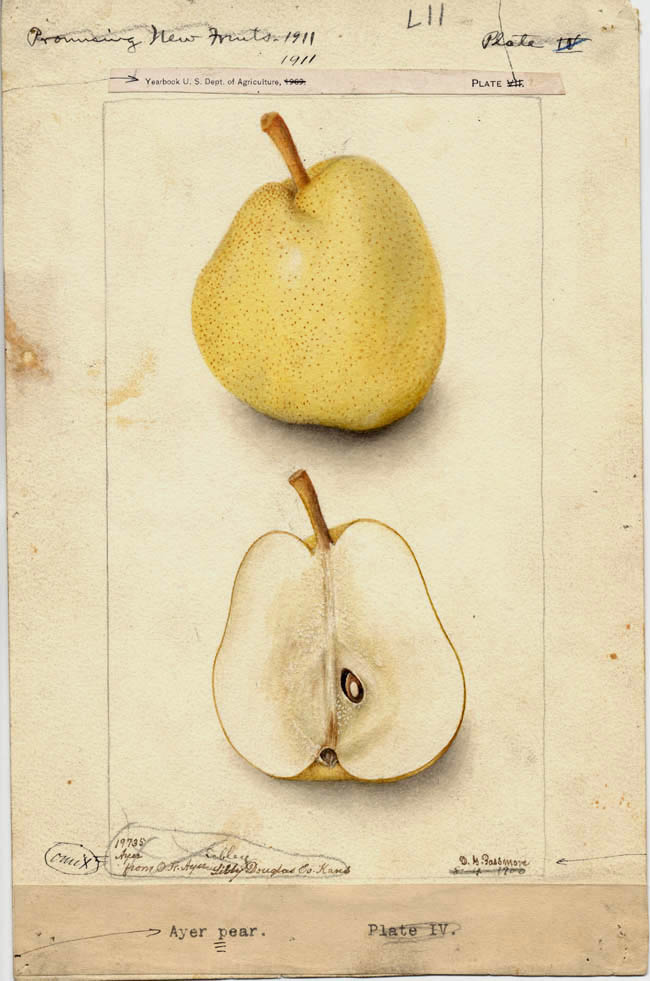 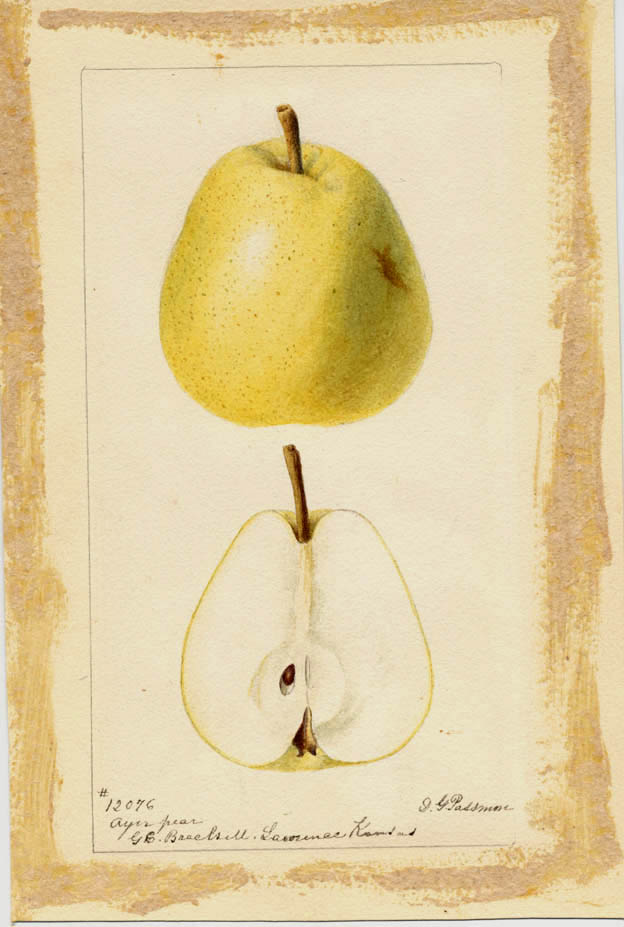 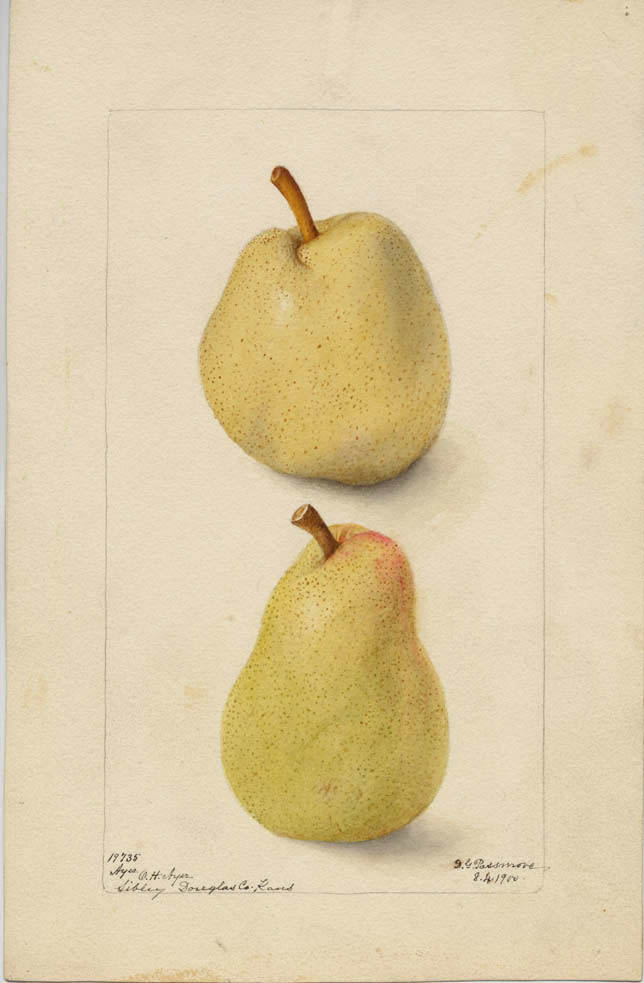