Apple leaves, what wrong with them?

This is the second year that my Fuji has had this dis coloring on many leaves. 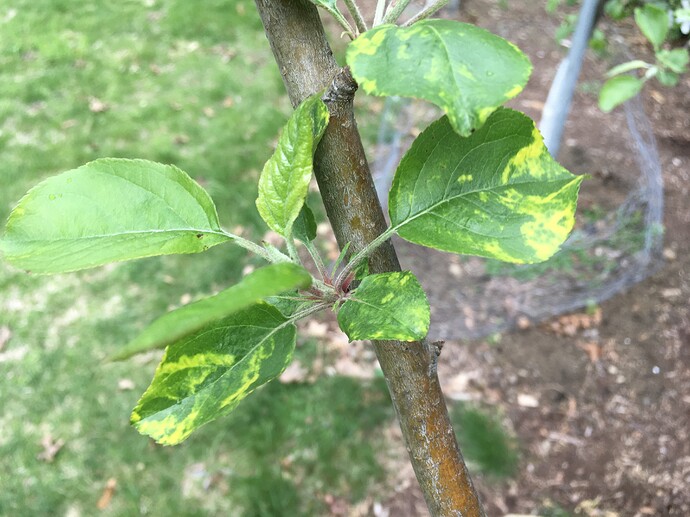 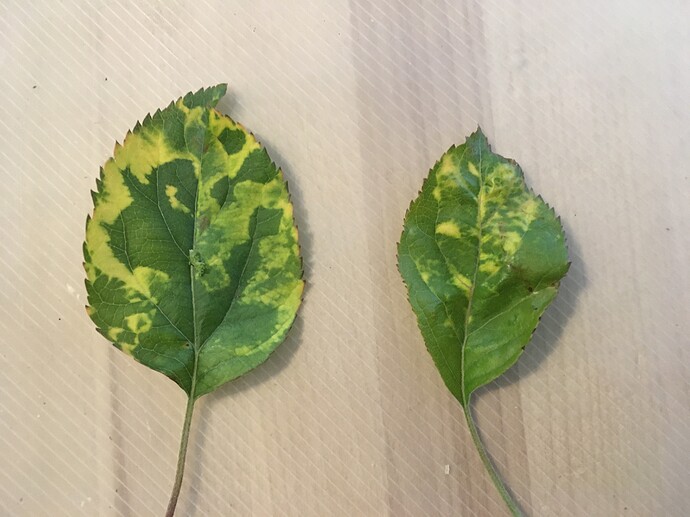 At first, I thought it was nutrient deficiency but could not find any pic that match this pattern.

If it is insect damage, what is it? Or is it some kind of genetic disorder?

It have a few grafts on this trees. Leaves on those grafts have this same issue.

The Golden Russet to the left of it or the Suncrisp to its right (6-7’ apart) not have this issue.

You input is appreciated.

A virus I think. (Not the one from China though.)

@marknmt ,
It does not looks like sunburn. The tree also does not get full sun.

@Hillbillyhort - that would be my fear.

I tend to agree on the virus diagnosis. I have one one frankentree with an apparent viral infection, and I see similar symptoms: early leaves of a handful of the 30+ grafts scattered around the tree display such markings, though most don’t. Later leaves generally don’t, either.

It doesn’t seem to cause any problems with vigor or fruiting, but I won’t share scions from that tree any longer.

Reading some articles. It took a tree a couple of years to show symptoms. Mine fits the bill. Planted around 2017, the first time I saw “weird leaves” was 2019. I thought it was nutrient deficiency. I tried to adjust the soil. It came back last year and again this year.

Agree that it has not affected any fruit or growth. However, had I know this tree is virus-infected, I would not have put 16 more grafts on it last month!!.

I think I gave this Fuji scionwood to a couple of people but could not remember who!

I may call Schlach Nursery to let them know this Fuji on G41 is virus-infected.

Thank you everyone for your input,

It’s not mineral deficiency
Either a virus or herbicide drift
but I lean towards the virus.

My Rubinette usually has a lot of leaves that look like this but it is still vigorous and highly productive.

I guess you can put it in quarantine (clean pruners, do not share scion) and see how it effects it later in the season. Could be just something that shows up early in the season with no effect on fruit or productivity.

Since you grow figs I’m sure you’re familiar with FMV and have a few trees infected with it that are pretty much symptom-free. Could be the same kind of deal?