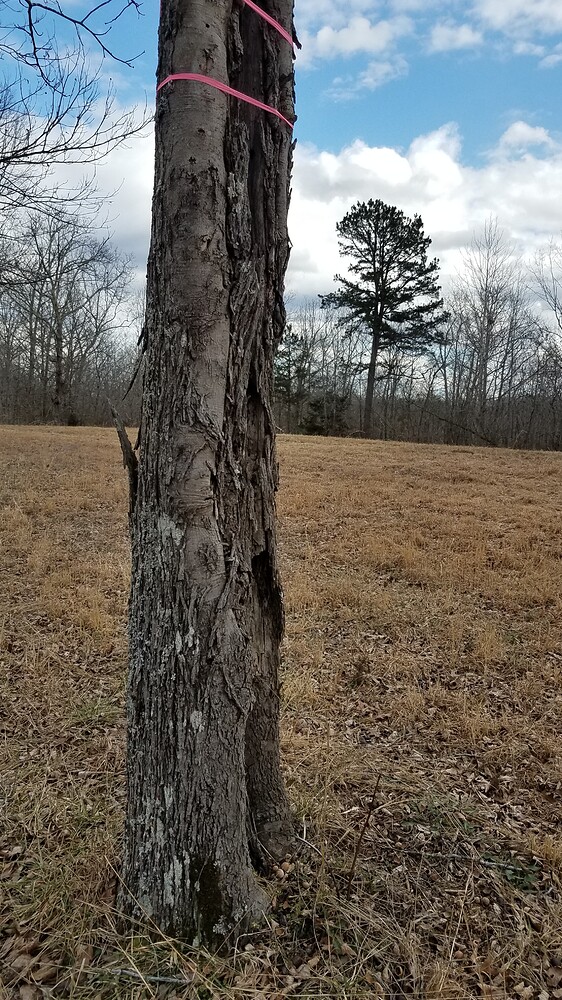 Plan to start on a new home project early spring this year. First will be clearing some ground in the area near this hickory tree (not in this pic) but just down the field from this location.

I plan to take this damaged red hickory out…
It will make some good firewood. Also two more just around the clearing a bit. Those 3 hick trees are on the top edge of a north hillside slope… which I plan to plant apple and peach and possibly other early blooming fruit trees on.

It may be March before the trees are taken out… plan to have bulldosier push them over… roll them around some to remove as much dirt from the rootball as possible… then will cut the rootball off and let him dispose of that. I will take care of the firewood.

So here is the question…

Do you think it will be ok for me to plant apple trees this spring within the fringes of the root zones of these hickories ?

For example 2 to 3x out past the drip line ?

Ps… I have a large pignut hickory now in my back yard and have a crab apple 8 steps from it … 20 years. They seem to get along just fine.

Should be fine. Although the hickories all produce some juglone, it’s minimal, compared to black walnut.
And… IMO, the ‘juglone toxicity’ thing has been overplayed. While some plants (like tomatoes) are definitely negatively impacted, I believe that a lot of what was attributed to juglone was nothing more than shading and outcompeting for moisture/nutrients by a large BW overtopping other things.

Thanks @Lucky_P - I think I will dig a extra large planting hole and there will be no hickory roots in it when I am done… and by the time the new apple tree roots get much out of that hole, what is left of the hickory roots are going to be dead or dying anyway.

I have crab apple, muscadine, wild grape and deerberry growing under a hickory and doing fine.

The hickory stump and root ball will be taken out, so only those extended hickory roots will be left (with no tree attached)… hopefully they will do my apple trees no harm.

about 12 yrs ago my father in law removed a 20in black spruce that was too close to another. he scored the middle of the stump with the saw. it looked bad so i put compost on it that summer to help it rot. the following spring, i found a mountain ash seeding growing out the middle of the stump. over the years i put some more compost and mulch around it. fast forward to 3 yrs ago. the tree is now 8ft tall. i read somewhere that you could graft pear to m. ash so i did. 6 cultivars. all are growing well and you barely see anything left of the stump.

Pear is less bothered by juglone…but the hickory stump is likely ok for the apples.