Big chance Of Arctic Blast reaching California within the next 60 days due to the sudden stratospheric warming event that has taken place in the last two weeks! I don’t like late season frosts and freezes when plants have already started their juices flowing a month or two from now. It damages the plants badly, not only the tropicals and subtropicals but also the deciduous ones that are in bud swell or blooming. So watch out for the weather closely folks and protect your plants as soon as the near term forecasts calls for it. 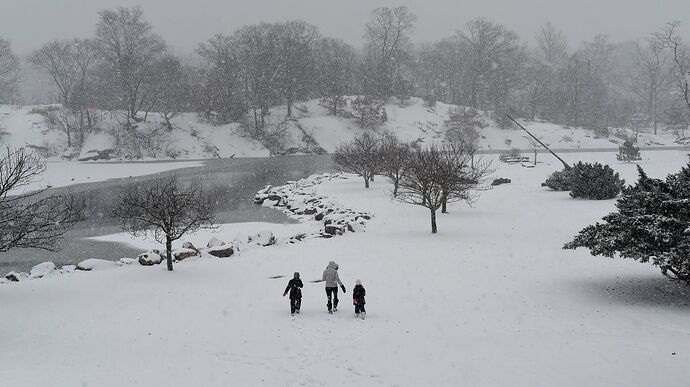 The polar vortex is about to split into 3 pieces: Here's what it means

A chain reaction could result in snowstorms in Europe and the U.S..

well, Michigan has been the warmest yet in the last 20 years or so. there was a cold blast in late november, since then mediterranean temps, or so it seems. so long as the blast arrives when the trees are fully dormant, I am ok.

Yes we are usually OK here no matter what because all weather is buffered by the Great Lakes. Rare for late or early freezes. I checked our history and they seem to occur about once every 10 years. Although we had two in the last 10 years, it averages out to 1 in 10. I can live with that. Currently all plants are ready enough for the winter.

To me that news article is so inaccurate, as the computer models have yet to be right even once. Lot’s of 'may" (5 times) and “could” (3 times) words in the article. They don’t have a clue.

I disagree. I’ve come across many climate models that are accurate. There are models whose predictions are often within 5%-10% difference between predicted and parameters measured. This is all about probabilities and standard errors of estimate.

If the term correct is having the same value as the measured, there is no such thing. A broken watch is correct twice a day while a watch that is 5 minutes late isn’t correct all throughout the day. Which one would you rather have?

Show me one that was correct, all I have seen were not even close. Short term sure, but long term trends have been way off.
I just wish I could count on them, but you cannot. I could plan better.

Nothing is certain until it happens.

Right, it may rain or it may not, very useful info NOT!

Let’s wait and see what happens, and I’ll comment in April.

To me that news article is so inaccurate, as the computer models have yet to be right even once. Lot’s of 'may" (5 times) and “could” (3 times) words in the article. They don’t have a clue.

They have to use this type of wording as this is a future forecast. Nothing is certain until it happens.

Old Farmer’s Almanac said colder than normal November for Ohio Valley…and above normal most of January and February. I’ve observed no other forecast that looks more likely than theirs which was written months in advance.

Accuweather says we still won’t have any nights below 20 in January. (Normally we would dip to zero at least once.) (But if zero is our average low, we need a warm year to offset 2014 at minus 19).

Yes The Farmers can be right on some years.

Yeah I was in Michigan a couple of weeks ago for work. Nice for this time of year, but NOT EVEN CLOSE to Mediterranean temps my friend lol. One day in the 50’s doesn’t quite qualify.

I live in a Mediterranean climate, and MI is not even close.

it was hyperbole. But maybe Northern Italy temps? It is still somewhat related to the Mediterranean.

Well I must say I was dead wrong the prediction was very accurate. Too bad, wish i was right. Damage to plants will be hard to avoid here when your high for the day is -1F. Which is fine, it’s the low that’s a bitch! -13F that day which is this Wednesday. Close to the point of killing stone fruit buds.Luckily my plants are well hardened off. I should be fine.

Forecast for a low of anywhere between 3 and 10 above zero for my area of Kentucky.
A normal winter low is zero to minus 5.
So, I am not sure why some of the weather prognosticators are calling it “record breaking cold” unless they threw away all the old records before 2015!!!

LOL Looks like you guys got lucky in that it is not dropping that far south, I expect 6 inches of snow today too. Which also is not going very far south. It is only 2 days which is very strange, the temps go all the way to 40f Sunday. So just a couple days of extreme cold. I’ll turn the heater on in the garage for the figs tonight.

Hmmm… The prediction of the Vortex splitting and wreaking havoc in the Midwest turned out to be true. As for us here, we’re crossing our fingers not to get hit. There’s still a chance. About 35 days more to go.

Only two days of extreme cold then back to above average temps, very strange. Hope it misses you, One year it came down twice, so it’s not over till mother nature says it is.
I might lose 10% of my stone fruit buds. But I have to thin a lot more than that, so I won’t even notice. 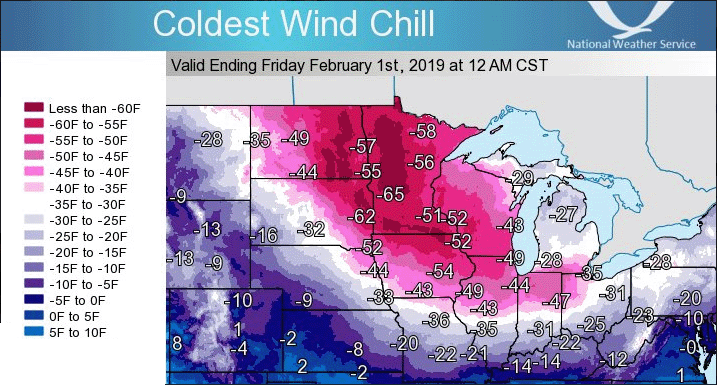 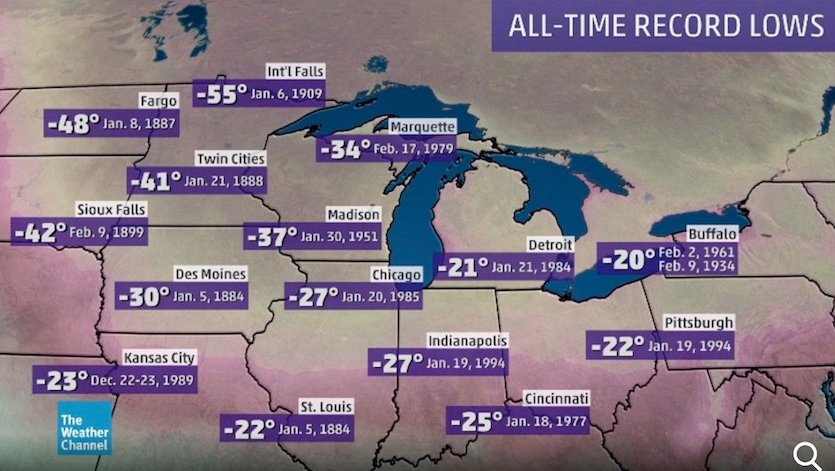 Figure 2. All-time lowest temperatures recorded across the Midwest. Recordkeeping across this region extends back to the late 1800s. Image credit: weather.com.