I know many of you have bagged fruit in the past. Here is an article regarding bagging peaches in South Carolina.

When Clemson University fruit specialist Juan Carlos Melgar suggested putting a paper bag over a peach to detract insects and diseases during production, farmers laughed. But when the trials in Seneca, South Carolina, funded by a Southern Sustainable...

Interesting and good news for southern growers. Up here in S. NY we often don’t need to spray after the third week from petal fall anyway.

I have not mastered the paper bagging technique. Several of my came off. Clemson bags come with a recomendation of spraying fungicide and insecticide a day before bagging.

In my high pest pressure area, to wait for a golf ball size peaches, it means 3 sprays of insecticide like Triazicide or Spinosad or even Surround, all may not be as effective as stronger pesticide like Imidan. I don’t consider Imidan as my neighbors’ yards are only 20-30 ft in all directions.

With good bagging application, the result is good. It is labor intensive at first but when bagging is completed, your job is done,

Interesting article. Anyone know the effect that no sun on the peach has on the taste?

I had read elsewhere that bagging did not work on stone fruits because they rotted inside the bag. I feel like the time from bloom to golf ball size is when I would need to spray the most Surround. I will try it next year on some peaches and report back.

If you talk about plastic zip lock bags that are used on apples, then, yes, there is a concern about possible rot in a bag. Only a concern. Not sure if there is an actual report. In fact, @BobVance’s father used this kind of plastic bags on peaches with no issue.

@BobVance’s father used this kind of plastic bags on peaches with no issue.

I’ll ask him how he’s doing with it this year. I was planning on bagging, but I fell behind and never got around to it. I suppose I still could on a few, just to see if it causes any issue.

My first two spray did not stop OFM or PC even in bags. I started usinpg Surround to protect the rest of fruit that have not been damage. Not sure how many will survive to maturity.

This is the first time that I bagged peaches with ziploc bags. It was a small tree and between accidental knock offs while bagging and thinning I actually bagged ten at around quarter size. Before bagging I kept them coated with surround. I removed one bag later as it had insect damage and the other nine survived with no problems. Bagging peaches is time consuming but this one small trial might not work in every situation. I wish they could be easily and inexpensively bagged. My bags had many small holes and this might have helped.

Bill,
Your special bags with tiny holes help. I don’t know about just zip lock bags with two bottom ends cut off. This year those bugs seem to find any holes big emough for them to crawl in.

Perforated bread bags are too thin. They can lay eggs right through the bags. Same as footsies (two years ago) and organza bags. Some of my Clemson bags did not work because somehow, I caused paper tear and created holes on the top of the bags where the wire was. Gentle and nimble I am not, obviously.

I cut larger corner cuts on my ziploc bags that I put on pears and apples. The ones I put on the peaches are smaller openings at the corners. At the time of bagging I was still spraying other fruit with surround and I continued spraying the peaches a little longer. It is just too early to decide if this method works. I’m not sure I want to spend the extra bagging. It took longer to bag and I had to be extra careful. I’m still looking for a better method.

Do baggies protect from birds?

I’m trying this for birds. I have the netting held up with some magnets from the underside so it doesn’t smoosh the branches. Unfortunately I didn’t really have the right sized net. I have a 15’ wide roll and had already cut some 15’ square pieces. I really needed a 20’ or 25’ wide square but I sewed together two of the 15’ squares. Still too narrow but now also too long, but it allowed me to bunch up the excess around the trunk and pin together with clothespins. I’ll keep tinkering with it. You can’t tell but this tree is about 7 ft tall. Theoretically something like this could work for a taller tree if you have a big enough net. 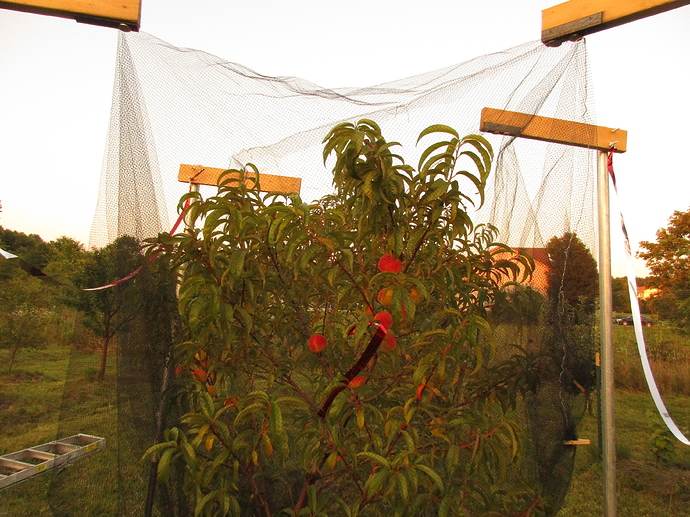