I have a Korean Giant pear that is just finishing blooming but most of the flowers were deformed. They were very small with hardly any petals or any other parts, a few flowers were normal. What could cause this? No cold weather lately. I did spray Kocide and oil when dormant, it was the first tree sprayed and the kocide had settled and caused a heavy concentration on that tree.

Sounds like the way mine looks. It still sets fruit when we don’t get frozen out. Been froze out 3 yrs out of last 4.

Lack of chill can lead to misshapen flowers for sure. It’s happened to me many times. Like fruitnut said already sometimes they will still set fruit. I had a Bartlett years ago that would do this and it would make a handful of misshapen pears every year.

Picture of flowers. In the center you can see one good flower but most are bad. I think chill was ok, my apples and plums were fine. When do Asian pears bloom compared to other fruits? It is far behind the Bradford pears in the area and behind my apples and plums. 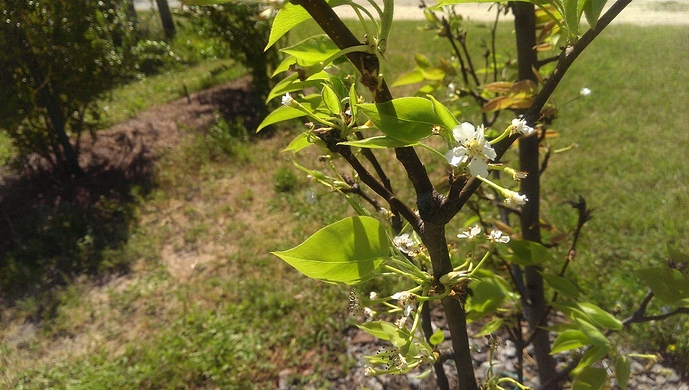 My Cleveland flowering pear bloomed 1 week before my Asian pears. They both overlapping bloom for several weeks.

C5,
I think it may depend on a few factors. One that I can think of right now is variety.

My Korean Giant is about bud burst, the same stage as Harrow Sweet , a E pear. While Hosui, another A.pear is only at swollen buds.

In my yard, peaches and nects bloom the earliest, followed by J. plums, A pears, E pears, cherries, sweet and sour, E plum then apples, the latest.

I don’t know where persimmon, pawpaws and jujubes will fit in. Need a few years to find out.