At what point do I choose the scaffolds?

This is a newly planted bare root tree that was headed at about 24". Do I choose the scaffolds soon and pinch back the other growth or wait a few weeks or wait until the fall? 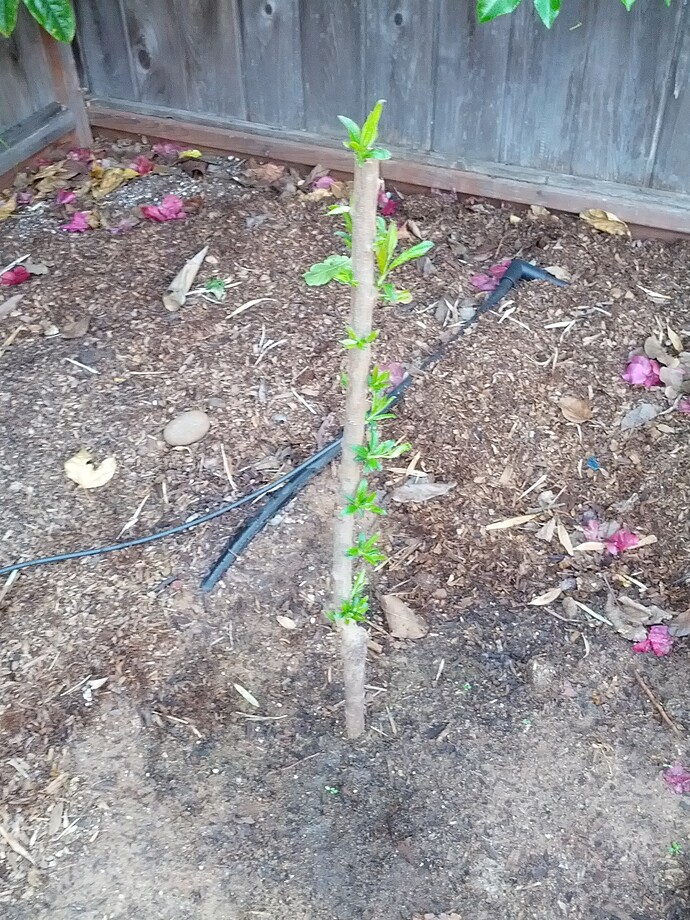 I wait until dormant pruning next winter. The tree needs all it’s leaves this summer. And it’s a little early to see what will be the best limbs.

I agree that I wouldn’t take much off, except maybe the ones too close to the ground. I didn’t remove the lowest on a few trees last year and they grew up through the canopy, one more than 6’. I removed it this year for scionwood, but that was wasted energy by the tree.

But, if you want to encourage the leader to go up and get the limbs to go more horizontal you can use cloths-pins above the small branches (when they are maybe 6-12") to push them flatter. You may not want that if you are training to an open center for stone-fruit, but if you want a central leader it can work well.

Thanks guys, as always, I appreciate it.

Not sure if you’re following the tenets of Backyard Orchard Culture or not, but if you are, you’re off to a really good start! The first year is about:

At planting time, bareroot trees may be topped as low as 15 inches above the ground to force very low scaffold limbs or, alternatively, trees may be topped higher than 15 inches (up to four feet) depending on the presence of well-spaced side limbs or desired tree form. After the spring flush of growth cut the new growth back by half (late April/early May in central Calif.). In late summer (late August to mid-September) cut the subsequent growth back by half. Size control and development of low fruiting wood begin in the first year.

Scaffolds just aren’t something to ponder too deeply. In the second year:

Single-tree plantings: prune to vase shape (open center, no central leader). Multi-plantings:thin out the center to allow plenty of sunlight into the interior of the group of trees.

There are a lot of BYOC pruning videos on the DWN site.

I don’t know… I’m a little ambivalent about my practice of heading them back that close to the ground. You can get some real leverage with a good fruit set. (Thinning means you have heavier fruit, some more towards the ends of the branches) and broken limbs if the tree grows strongly. Sometimes they don’t grow that well after being pruned so heavily, even though you do it during dormancy.

I don’t grow my trees in the close space BYOC method. If I did, Mr. Clint’s recipe might be a starting point for me where you are working against the genetics of the tree to try to get it to be productive in a tiny space. I’m sure it works well, especially in the land of rainless summers.

FN grows mostly in containers so he gets his dwarfing by root and irrigation control and anything he can do to speed establishment is a plus. I’m more in that boat.

I don’t worry about spreading branches or choosing scaffolds the first season. If there are potential branches on the tree I may or may not cut them back as proscribed for newly planted trees- I don’t think it is needed on a plum, but this isn’t your concern because you started with a stick.

The more upright the growth the more the growth so why spread at first and I agree with FN that more leaves more better when plugging the tree into the ground. They will feed the roots as well as now top growth and you can worry about permanent scaffolds later.

If you want, you can choose the scaffolds after the first growth surge and do a bit of pinching of competing branches to assure their prominence.

The first round of bare root tree plantings I did, I chopped them off at about 15"–to a branchless stub. I did it because I have very limited space and am growing open center. But I’m no longer convinced that it’s a good idea to basically start from scratch like that on branches. By cutting those trees off below the bottom branches, it did force low branches, but I think I delayed fruiting by at least a year–regrowth seems pretty slow. On my last batch of plantings I tried both. A euro plum I got mail order already had a lot of branches and was quite tall. I cut it higher, at maybe 24", leaving 4" stubs of some well-placed branches. The growth has been terrific. A Lapins cherry I planted, however, which was also originally a well-developed tree, I cut off at 15" and it has barely created one or two branch stubs. I wish I’d allowed it to keep some of its former growth. I know I can’t compare a cherry to a plum, but overall it looks like chopping them super-low sets them back considerably. Next time, I’ll tell myself the tree will be a little higher up than I wanted, but I’ll get fruit a year or so sooner, and maybe not stress it out so much hacking it almost to the ground…Not sure I’m right on all this, just my impression.

my experience has led me to planting the bare root as it arrived. Cut off any damage or badly directed branches, but mostly leave alone The first growing season take all the leaves you can get. In the following spring prune back any branches growing where they shouldn’t, but thats all. The scaffold should start showing themselves in the second year. You can pick them and adjust their angle by tying to a brick, use clothes pins, or use solid core electric wire. with needle nose pliers you can bend it to suit the need. Other branches I pinch off the tip to slow their growth in order to promote the chosen branches. But I leave them for their foliage. the following year I will cut some or maybe all of the non-chosen branches. I leave them as long as the chosen is not ready to take that spot of sunlight. I want foliage to grow roots.