I have a few Asian pear varieties on one tree. One of them is Seuri Li, I believe from USDA Germplasm repository in Corvallis via Home Orchard Society scion exchange.

It blooms a week or a week and a half before Chojuro and Hosui or any of my other pears. I’m looking for a good pollenizer for it that also has useful fruit.

I’m not certain if Seuri Li is distinct from Seuri. I’ve seen scions offered of the two side by side with separate labels. Seuri is purported to bloom early like mine and supposedly is pollenized well by Ya Li or Tsu Li.

Does anybody grow one of these or another very early blooming pear that you recommend?

I was just out spraying last night, and Chojuro and Korean Giant are both on the early side as they both had dropped petals so I could hit them with Surround. My Seuri ended up being pollinated by something and those are my two earliest ones so thats my best guesss.

Note I removed my Seuri this winter, its a unique pear in looks and taste but was not something I’d want all the time. Its late ripening but does not store well at all, the flesh browns.

Seuri Li and Seuri should be the same pear, Li is pear in Chinese I think. Kind of like all the jujube varieties with Zao (“jujube”) at the end of the name.

Thanks Scott. My Seuri Li has flowered for a couple of years now but hasn’t set any fruit. Last year was very light for the Hosui and Chojuro too but the year before they bore. I’ll see what happens this year, although we had rain every day after the first couple of days of Seuri Li bloom.

My earliest bloomers in Corvallis and Southern Oregon are Raja and Yoinashi. I don’t keep track of dates, but I’d say they bloom about 2 weeks before Shinseiki. Neither one of those varieties has wowed me with their flavor, but they seem to fight off canker better during our wet springs.

The rain during bloom for early varieties is a killer, and pollinators don’t seem to go crazy for Asian pear blooms during those 15 minutes in March when the rain stops. I spent about half an hour hand pollinating this year on a dry-ish day and it seems to have bumped up my pollination success a bit.

Update. Spring 2018 had miserable weather. This spring had good weather when Seuri Li started bloom, but rainy when my other pears started their bit of overlap. I’m judging by seeing petals, not by examining pollen shed or actually looking inside the flowers for conditions.

In any case, there are 3 fruitlets set on my Seuri Li! Hopefully the persist.

@murky,
I read a couple of threads of Seuri pear that you and @scottfsmith discussed. I saw the pic of your Seuri that similar to Hosui (brown skin) and Scott’s Seuri with bumpy skin.

Between Scott’s and yours, which one is the real Seuri? I don’t know which one I have, either.

Today I went to check my orchard, Seuri’s flowers are blooming, ahead of every other pears. I saw a couple of Korean Giant flowers start to open. I hope to cross pollinate them.

My conclusion was they were the same. I think our source was the same as well, Corvallis. I think my hot weather produces the bumps.

Yes I have seuri. My scions were from raintree nursery.
I didn’t take a pic. I remember it is green with russet, not the total brown. 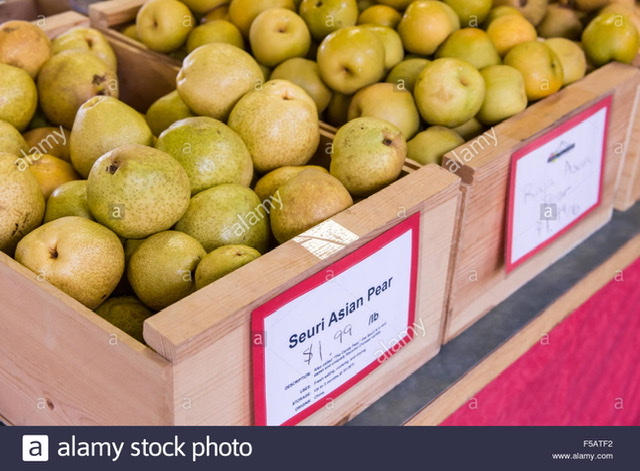 Thank you, @scottfsmith and @Sophia2017.

I believe Scott said his Seuri pears needed to be cellared but he still was not impressed with the fruit quality.

Sophia - I checked Raintree, the description of its Seuri pear sounds good. Do you like this pear? Do you eat it fresh from the tree or you need to refrigerate it for a while?

I had a lot of pears last year. So stored in the refrigerator for a while. It tastes not bad, but not so impressed.

I wonder who else has Seuri and what are their experience?

I grafted it 2 years ago, when someone shared extra wood from ARS. I think this is the first year it has flowered. It is the top graft in this pic, just above the Ya Li. Ya Li isn’t something I like (based on Chinatown purchases), but my wife loves them, so I figured there wasn’t harm in having a branch of it. 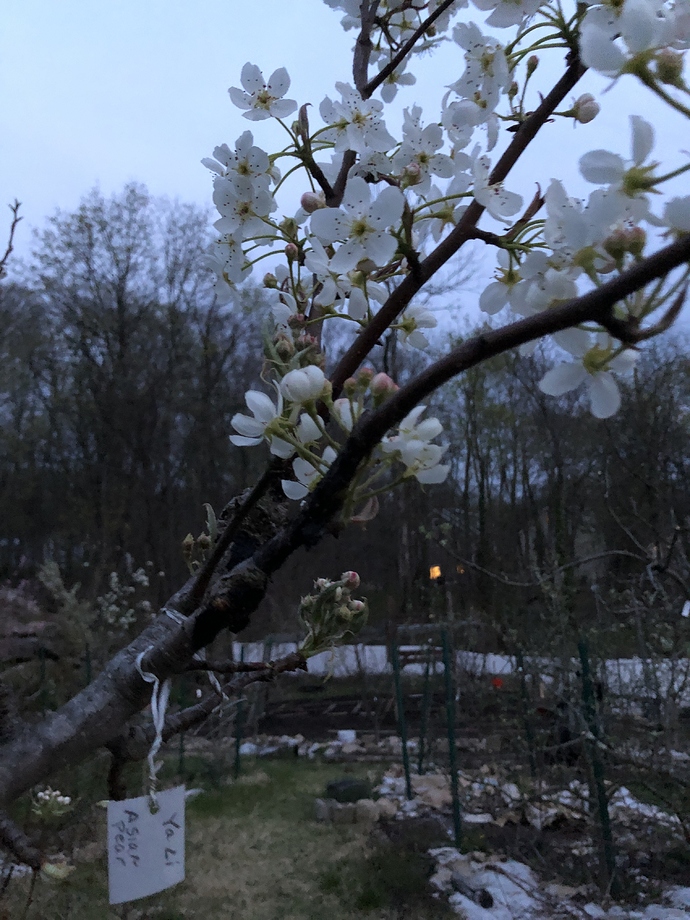 This is a pear on quince at a rental. Then, Duchesse d’Angouleme is the main trunk and the left hand side. Korean Giant in the middle and Hamese on the right. Hamese is supposed to be one of the earlier Asian pears to ripen, but I don’t think it was an outlier in terms of being early to flower. 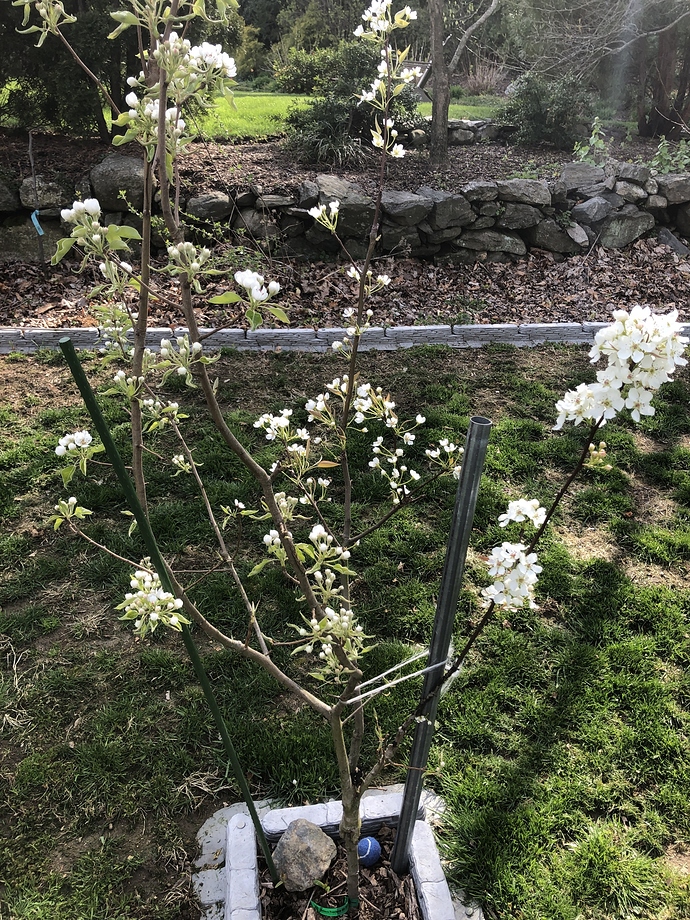 So the above pics from 4/14 (Ya and Seuri Li) and 4/19 (Korean Giant and Hamese) can set the baseline. But the earliest bloomer for me is Yaguang Li. I got it from ARS and they mention that it has some P. ussuriensis heritage, so this may be partly responsible.

Here is a pic from 4/5, 9 days before the pic of Ya and Sueri Li in full bloom. Yaguang Li is on the left and the green clusters on the bottom right are 20th Century (which is flowering now). 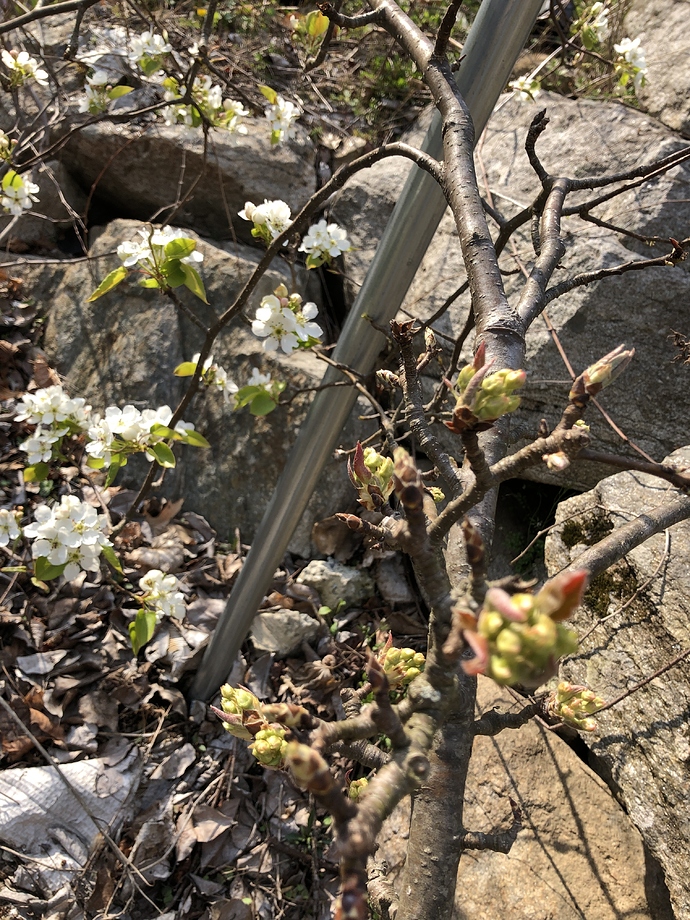 Regrettably, I can’t comment on the fruit. I think there may have been some last year, but something got to it before me.

@bobvance, thanks for your input. Those are a lot of pears. I am glad that KG blooms early enough so I can attempt to cross pollinate Seuri with it.

Love to hear your reviews on your pears. Do you like the taste of Ya Li? How about Hamese? I hope your Yaguang Li will taste better than the store-bought one.

I topworked my Yaguang Li from USDA Corvallis to Clark little yellow pear because this tree set lots of large rock hard and not tasty pear at all. I would say it was the worst tasting Asian pear that I have eaten out of the 15 plus varieties that I grew.

Hamese was the earliest ripen pear among my fruited pears last year. About the end of June or early July. The taste is not bad, crunchy, juicy, not so sweet as other pears. I am happy to have pear that early.
I grafted ichiban and early shinsui last year. Early shinsui was selected from the seeds of shinsui. It is earlier than shinsui, possibly could be ripen in June.

Thanks for you guys’ input on the taste. Nice to know that Hamese is that early. My first pear does not ripen until late Aug/early Sept.

I have Pai Li, Ya Li and Shin Li that the grafts are still young. Any of these are early pears? How do they taste?

All three of them are mid season. Pai Li is medium round fruit, sweet, crunchy, and probably the only Asian pear that can ripen like European pear, and my wife favorite. My Yali is juicy, light, agreeable sweet, and loaded every year. Shin Li is somewhat a very large green pear, mildly sweet, and fruit like every other node.

Tony,
You said you have 15 plus pears. Are these all Asian?

Could you please rank your top 5 Asian pears? Thanks.

lots of large rock hard and not tasty pear at all. I would say it was the worst tasting Asian pear that I have eaten out of the 15 plus varieties that I grew.

That’s very interesting. Well, at least I only have one branch…

The ARS site gives it a glowing review. At what point did you pick it? The “full_ripe” metric has 2 datapoints, 255 and 286, which would translate to mid-September and mid-October, so it could be pretty late.

Also, the description mentions the following, so it could be necessary to store and further ripen it like Euro pears:

It resembles the better American or European pears in tenderness, juiciness, flavor, and quality more closely than any other pear in China.

It ripened in the middle of October. It is still rock hard yellowish in color, barely sweet, and no juice at all. I hoped yours is better than mine.