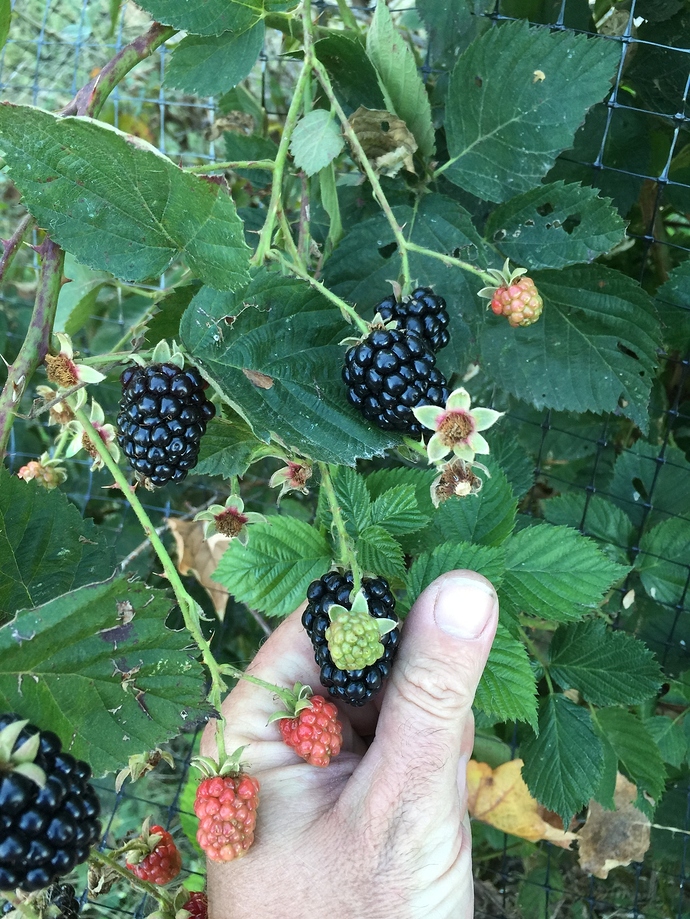 I plan to add more Primocane blackberries in the spring and wanted to solicit some advice. I planted a large number of Prime Jim against the advice of a member here and wish I had not. The taste, size and fall production is not impressive. I am impressed with what I believe is Prime Ark 45 from Stark Bro (in Photo) I was wondering if Freedom or Traveler would produce as good and tasty of a crop?

I agree with you that the 45 is sweeter than Jim and Jan. We put in Freedom last year, however, many of the primocanes did not produce this fall even though they are huge ( like 8 to 9 ft tall). A few did produce huge, tasty berries, but I’d say 3/4 did not produce a primocane crop.

I have corresponded a bit with John Clark, head of the University of Arkansas blackberry program, and it is his oppinion that high heat is the enemy of the primocane fruit buds, with a magic temperature of around 80 degrees F during the June/July bloom season being the point at which crop damage occurs. That they are marginal in the typical Arkansas climate and only produce acceptable primocane crops in the coolest of summers there, however he has found that they do produce floricane the next year inversely proportionate to their primocane yield. So people in warmer climates can plant these varieties and expect a very early floricane (second year) crop if they have a typical or warmer than typical summer. However in the pacific northwest these same primocane blackberries seem to thrive with very high primocane yields. So in other words performance depends on your climate.

As to the specific variety, I have Prime-Ark Traveler planted here in Louisiana, they have been in the ground less than a year, so I have only tasted a few berries, however from the ones I have tasted flavor seems to be good, however the skin is very tough. I plan to add some Prime-Ark Freedoms this winter, which hopefully will not be as tough as the Travelers.,