My 25 lb bag of surround arrived a few weeks ago and I finally opened it, I don’t know how long the bag will last me with just a few trees but from a price standpoint this appears to be the best buying option. This will be a learning year for me on how best to use and benefit from surround. My first thoughts was to coat the fruit early to allow me to let the fruit get a little bigger before bagging. Is any users mixing other things with surround such as stickers or spinosad etc. Thanks, Bill 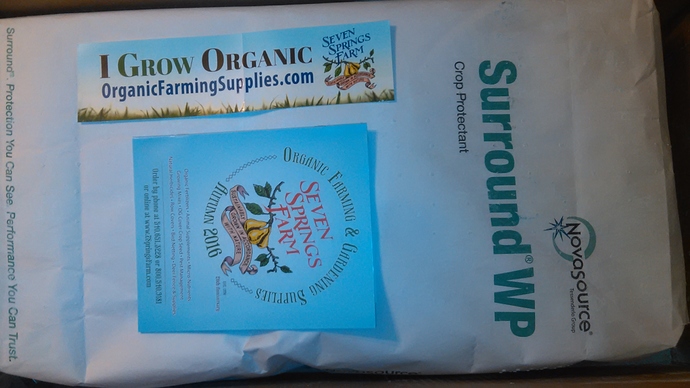 Should last a good while, Bill! I used it one year, and many here use it, but I just didn’t care for the way things felt when it was on; I had a kind of visceral repulsion to touching anything it was on because of the texture. I guess the idea is that bugs feel the same way! (It also gave my tree a ghostly appearance.)

(It also gave my tree a ghostly appearance.)

The ghostly appearance might be a problem for me also. I plan to use a 1 gal pump up sprayer. Any thought about ease of use from this type sprayer. Thanks Bill

Bill, it should go through any sprayer OK. Make sure to mix very thoroughly as you are adding the water. It doesn’t clump as bad as some powders but it can clump some.

Don’t use a sticker with it as it will not flake off on the bugs as well that way. On the other hand any other bug or disease weapon can be thrown in, I usually am adding spinosad and sulphur for example, and maybe other things depending on whats going on in the orchard.

It is somewhat annoying in that when you scrape against something sprayed with it you will get it on your clothes. Its very similar to how chalk is annoying, the dust gets all over. That is one reason why I don’t spray it through the summer, somewhere in mid-June is when I stop. Except for stinkbugs which may get a later treatment.

The schedule to follow is based on the rains and the growth, if it rains an inch your fruits will be barren and vulnerable right after and will urgently need a spray. Lastly for the curculio the night temperatures should also be watched, if its in the 40’s they will be moving slowly so no big rush to spray but when the nights get warm they are ten times as active and so you need to have a much better coat on.

Thanks Scott. This information is just what I needed to get started.

Thanks Scott. This information is just what I needed to get started.

Indeed, @scottfsmith . Good info. Thanks for the details. I bagged 900 apples very successfully last year, but we picked at least 900 more. I relied only on Spinosad and Captan. This year, I’m planning on using Actara, which ~might~ be less harmful than Imidan. However, I’m still wondering about using Surround in lieu of Actara, or perhaps after getting in a spray or two of Actara.

I started needing to spray last year, and used Surround on everything, apples, plums, peaches, pin oak, roses, and dogwood. I mixed it with sulfur early on to control scab and just used it straight up later, as needed. I also mix it with sulfur for deer repellent, which is why the non-fruit plants got Surround sprays. I did end up bagging all of my apples by early June, so I don’t have a good sense of how it worked against codling moths.

I used Surround on peaches too, but there is a point where you should probably stop spraying peaches with Surround. I think I applied it about 3 weeks before harvest. I had to use the dish sprayer at the sink pretty aggressively to get the residual surround off. However, it does work because when I picked peaches this summer I also picked an adult curc into my bag, but didn’t lose and peaches to curc that I know of.