Since I promised scions and have already gotten some in the mail I was minded to take a closer look at my trees and see how things are going. (I also wanted to make sure I had everything I’d promised.) So I grabbed my ladder and made a path through the snow to get up close and personal with my apple frankentree,

I was surprised to find Macoun scions that I grafted last year already trying to leaf out. F’r cryin’ out loud, folks, it’s 30 F and not even February yet, and I’m not happy to think of these guys popping now and getting their tender parts frozen off when we get our (probably) inevitable February arctic blast.

It’s been a mild winter, which is good, but if it is going to be hard on stuff I’ll take the more traditional version, thank you.

Anything I can do to help prevent damage? Do I even need to worry?

Wow, your case seems more crazy. I wonder if our trees think they are in @fruitnut’s greenhouse!

Has it been steady in the 40-50 degree range then just dropped to 30 recently? If so that is too bad. You usually have a real winter! I would be surprised too to see any green on one of my trees right now.

It is crazy, isn’t it? But no, it hasn’t been in the 40-50’s at all; we’ve rarely broken out of the 30’s and have spent a lot of time in the high teens and the 20’s. And it appears to be just the Macouns that are affected. Also, none of the other trees appear to be so eager. Usually we’d expect to see the cottonwoods and willows way before the apples.

So I don’t know what to expect. I suspect that it’s related to an unusually hot spell we had at the end of June last summer (and I credit the same spell for the good flavor in some of my fruit this year) but I don’t really know.**Be interesting to hear everybody’s thoughts.

Crazy? For sure. And no, it hasn’t been warmish at all. In fact, it’s been in the teens and twenties, and we had single digits a few times.

I think that perhaps the Macoun, for some quirky reason, is uniquely responding to an unusually hot June. But cottonwoods, willows, and apricots, our usual early bloomers, aren’t showing any sign yet. I don’t know what’s going on- but it has me wondering, and a bit worried!

Well you could spray them with wilt stop to seal them, that should give them some protection. Use the rest of the mix if any on anything that is not that hardy. You have to spray though on a sunny day when temps are above freezing, so you might not be able to get it on. Doing so otherwise the product will fail. It is what it is!

Wilt stop? OK, I’ll look into it. Thanks for the suggestion.

Wilt Stop is used for various reasons. It protects plants from drying out in the winter. I use it as like a zone pusher. protecting plants that really are not hardy in my zone.So it will put a protective coating on the stems. it might not help at all, you asked if anything you could do? This should protect it, and probably stop growth too. Not sure it’s worth trying? I know it helped me with peaches. Peach fruit buds start to die at -10F. I sprayed my peach buds, it got to -16F. !/3 of them survived and produced fruit. Peach wood is damaged at -18F. So the buds should have been all dead! So it may protect those tender stems or at least limit damage. 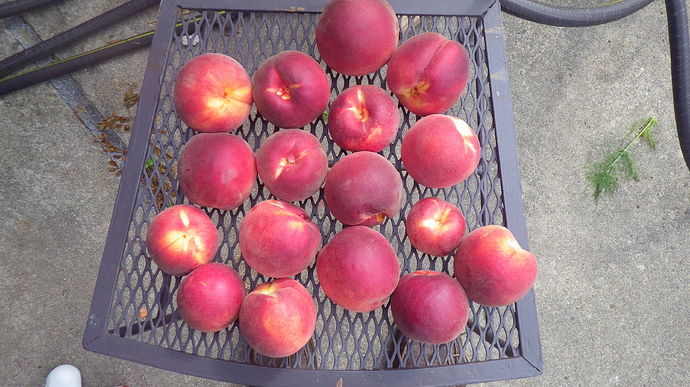 Sounds like it’s worth a try at the very least and might just solve the problem, so I appreciate the idea.

Still wonder though what really is going on. Why should just those scions be pushing so hard this early?

Closest I can come to an answer is that since the tree doesn’t know what’s going to happen it can only be responding to what has already happened to it, and the big anomaly in our weather since those scions were grafted was an unusually intense hot spell in the last half of June 2015. It’s almost as if that set the clock on those particular scions.

I remember that hot spell, 100’s in June crazy. Just east of you over the divide my trees are still comfy dormant for now but the forecast is 40’s and possibly 50’s here for the next week. I’m afraid your right that we’ll get spoiled this week and a week later subzero. If you try some Wiltsop keep us all posted as I’d like to hear how well it works myself.

I bought some Wilt Stop today and will use it when I can more or less count on a few hours of above-freezing temps. I’ll let youse know what happens. Tomorrow is predicted to be above freezing all day, but with a good chance of at least some shower (and therefore high humidity, which of course slows the drying time.) So we’ll see.

Good luck! It sucks that happened. I may spray again this weekend. A 2nd coat can’t hurt.

Above freezing, we are going into the 40’s this weekend. Also Sunny helps to dry, if cloudy do it early to give it all day to dry. If done otherwise it won’t work you’re wasting product.

Boy no kidding, the sun was out for the past couple of days, all of the snow is melting, the sun is warm and the birds are chirping really early this year! Is winter over?

I wish. More likely that spring is just pipping at her shell. It’s likely to be awhile before she completely cracks that tough shell.