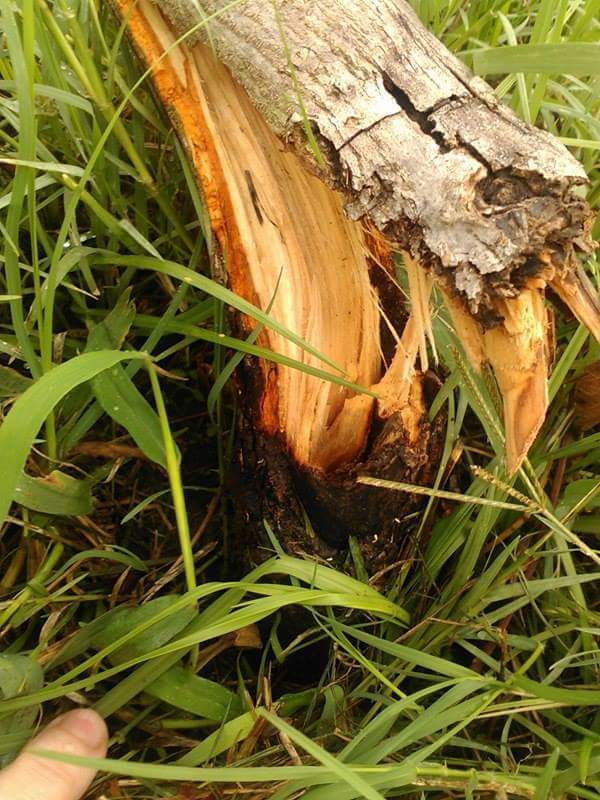 We had a bad storm a couple nights ago and a pecan tree I had in the yard got snapped off near the base. I stood it back up and taped the break up tight with tape to hold it back together. Right now it is staked with two T-Posts to keep it from moving anywhere. Do you think it will have a chance of recovering? It really took off growing this year almost doubling in size. I figure even if it doesn’t heal and it comes back from the roots I will graft it again later. The bark on the back side is still intact so it has a continuous strip of bark still.

It might recover as is but it will be a long time if ever to actually form a strong tree. That break is too severe and will be very slow to heal completely around the base. Pecans are slow healing trees IME. An apple or pear would have a better chance in that condition. Grafting back on a sprout will give you a stronger tree. But even there that base needs to be in a condition to heal over. You don’t want a hollow foundation on a tree that will someday be carrying a large load of wet nuts in late summer. We just had 55 mph winds on my big pecan and I was concerned about limb breakage. It still has leaves and partially dried out pecans.

Storms and pecan trees don’t mix, in my experience. Even though they’re in the hickory family I found them very weak wooded. Strong storms regularly blew the tops out of my mature pecans. My trees naturally developed weak crotches and there was almost nothing I could do about it. Maybe some cultivars exist that are known for stronger wood.

Is that a grafted pecan, or just a seedling?
If a seedling… I’d probably cut it off below the break - or all the way back to the root collar - and let it re-sprout, selecting the strongest of what will likely be several new shoots to pop up next spring. With the established root system that one has, it may rebound almost to its present size in just one or two growing seasons.

It was a grafted tree. I think the best thing is to let it grow and see if it will heal over the winter. Then in the spring cut it off down low and let it re-sprout and graft on to one of the sprouts. Luckily it is not one of the trees I am counting on to produce right now. I have a couple of large pecans trees that are about 75 years old.