Shout out to @hoosierquilt for recommending this shrub. Now my house smells like Macy’s! 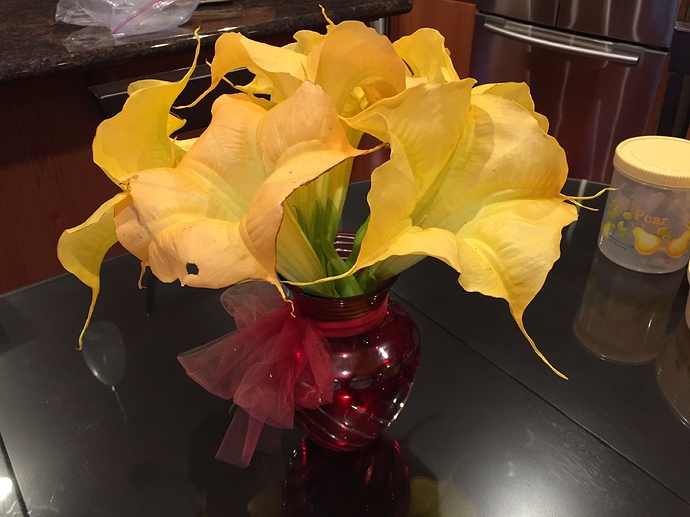 Beautiful, Vin! They are very lovely.

Here was my Brugmansia two years ago when it was at its zenith. 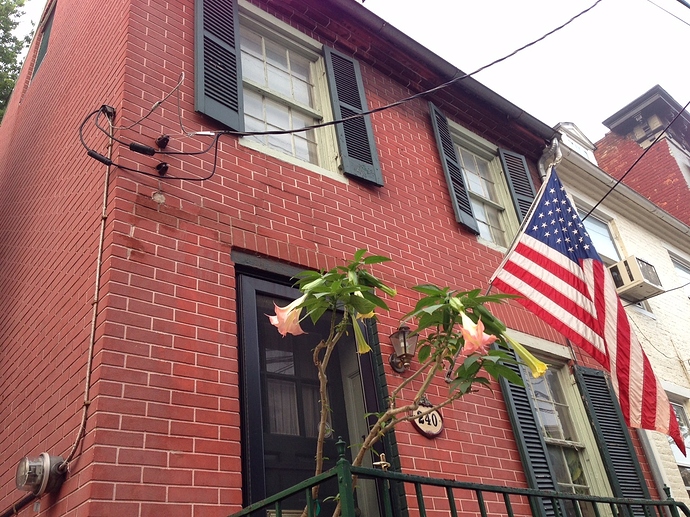 It suffered complete die-back during this cold crappy spring. It is currently re-sprouting from the roots. These things do not like my climate at all. They are a pain in the rear end to grow here, and require massive amounts of fertilization and near-perfect seasonal conditions in order to do well outside by me.

They cannot take repeatedly extended periods of time with below-freezing temperatures and absolutely must be kept in pot culture indoors during the winter. Mine spends November thru March in my basement.

They sure are beautiful, and they smell wonderful in the evening when the flowers really crank up the perfume.

I have seen mature trees in Hawaii that are real knock-outs. Strangely enough, the plant originally hails from the foothills of the Chilean Andes, where it can get quite chilly.

Don’t eat the leaves or flowers, and don’t let your pets or children eat them either. They are deadly poisonous!

Don’t eat the leaves or flowers, and don’t let your pets or children eat them either. They are deadly poisonous!

They also get eaten quite often because they contain psychotropics. Not a good choice for the experience.

Matt, another thing that you can do with yours in the fall is to cut the stems off low beneath where the “woody” part starts, and put those in a bucket of water. They’ll root, and the original plant will also grow back from the roots.

I love the smell of brugs in the evening. Brugs, tea olives, citrus, gardenias, and jasmines, all smell so wonderful when they are growing outside and the scents waft in through the open doors and windows!

Our best brug blooms are in the fall when the days are still warm to hot and evenings cool.

Aren’t those flowers/ shrubs Datura? Pretty, but do not touch!

Closely related but not the same. Just as poisonous though! I have this shrub tucked in a far corner of my lot.

I used to own a few pots of the Datura until they decided to quit on me with wintering aphids. Pretty but need handling carefully.

I’ve read awhile ago that some kids in the States brewed tea out of the leaves/flowers to get high but met a tragic ending! I can’t stretch enough of the “handle with care” of this particular plant. I do like its glorious flowers and its “heavenly” fragrant though…

I had couple of brugms before, one is white one is yellow. After sunset they give heavenly fragrance. Love to sit at deck and breath in the aroma. The plant is poisonous, but the leaf can be used as medicine to treat cough.

Please don’t use any part of the brugs for medicinal purposes. There is no safe way for the average person to know the concentration of any of the chemicals in an individual plant or part of a particular plant. The unplanned side effects can, at best, be terrifying, and lead to an unpleasant death. Every year people die from attempting to use brugs medicinally or recreationally.

They are beautiful, highly ornamental and enjoyable plants. I grow them, myself. But they really aren’t appropriate to use as medicinals.

Annie, I would most definitely not recommend using any part of a Brugmansia for medicinal purposes, either. They are really quite poisonous, and even prolonged exposure to the fragrance can cause symptoms (Vin, careful with bringing flowers into the house). The chemical causing a very terrifying and an intense hallucinogenic experience. It can also kill you, or if you survive, leave the patient with long-term sequelae (mental issues, liver damage, etc.). My neighbor had Brugmansia growing in her yard, and one of her son’s friends took some, made a tea out of the leaves, and ended up in the ER and placed in restraints so he wouldn’t hurt himself (or the ER staff). It is part of the (deadly) NIghtshade family. All parts are poisonous, with the seeds and leaves being the most poisonous. Besides containing several poisonous alkaloids, including large amounts of scopolamine.

Vin, careful with bringing flowers into the house

medicine usage has qty that to be prescribed I have never stated that anyone just eat it or make tea and drink it. Or, I am going to use it, I just stated fact,. About poisonous, yes it is, and any western drug can be poisonous if overdosed. The way
I knew someone used the leaf is to burn a small amount inheal like a cigarette

Yes, they contain the drug scopalomine which can inflict memory loss.