I was wondering if Montmorency cherries grew from cuttings? They dont grow true to parent from root suckers right? I would need to cut it?

Yes they grow true to parent from root suckers. Anybody saying otherwise chopped the wrong root

They can grow from cuttings but they can be a bit of a bitch to get going.

Easiest way? Plant the seeds, wait for the saplings to grow a bit, then graft into them. The seed root will be whatever quality fruit it wants to be. It doesn’t matter; you are just using it as rootstock for the true monty you will be grafting into. Heck at that point you should have several saplings to use a rootstock for other varieties of sour cherry trees you can get a hold of.

Montmorency grows from seed? But if there is a rootstock the sucker can’t grow true to parent right?

You mean I can graft cuttings?

Montmorency is usually grafted to mahleb rootstock or to mazzard. So rootsuckers will not give you a Montmorency tree. You might be able to root cuttings but it’s a long slow process. In most cases you would be better off grafting a Montmorency scion (cutting) to mazzard rootstock if you want to make new trees.

Growing montmorency from cuttings, seed or suckers is considered pretty easy. I’ve grown them in 2 ways from seed and suckers. The third way I’ve grown many other cherries by using rooting hormone on the cutting. I cut off green shoots and dip them in rooting hormone and stick 4 or 5 in a pot filled with sand. I cover the cuttings with a glass jar keeping them under a grow light. Seed grown montmorency are not like the parent and Evans Bali is one supposed example of that.

Can I put the cuttings in potting mix? I tried it with a wowza I had but the cutting all died, is there a precise way I need to do it? How deep do I put it? How do I keep the cuttings from losing hormone

How do you water them I used spray not sure if that was a good method.

Sure you can use potting soil but sterile never before used soil is better than not. Mold is your enemy and you always get some. Use the method i used here or something similar Propagating Autumn olive (Elaeagnus umbellata)

Montmorency grows from seed? But if there is a rootstock the sucker can’t grow true to parent right?

→ IF ← you have a Montmorency tree growing on it’s own roots, it will grow true to type. IF your Montmorency is growing on a different rootstock, the root is going to me a clone of the rootstock.

So the easiest way to get many Montmorency trees is to plant the seeds for saplings, and use those saplings to graft true Montmorency into them.

I guess I’ll just do in sand like you, maybe I’ll do I mix up, won’t the sand dry out quickly if I don’t have a cover?

Yes you need to cover them to control humidity.

Can I leave the suckers in water overnight would they still be ok by the morning with rot?

I meant cuttings and suckers

Cuttings should not be left in standing water. Your goal is to create a good humidity controlled enclosure.

A Ziploc bag over your container would provide the high humidity.

Rotting cherry cuttings is not trivial, meaning that on the best of the environments most of them fail. One slight error and they are all dead.

Easiest way is via root cuttings (if the tree is sitting on its own roots) or grafting. For suckers you need to let them get established very well before you pull them, or they just die. As a matter of fact pulling the sucker, ripping the top, and potting the roots works best; that root is already pumped for pushing up foliage.

I planted them, maybe overwatered some as water was dripping out the bottom, hopefully rooting hormone didn’t wash away

If I chose to graft the seed how thick must the stem of the seedlings be?

@don1357 @clarkinks
These are my cuttings after about 1 week, 12/13 seem to have started to rot and this one was the only one left that had some chance in it, you can see in the picture that it also has a bit of brown. 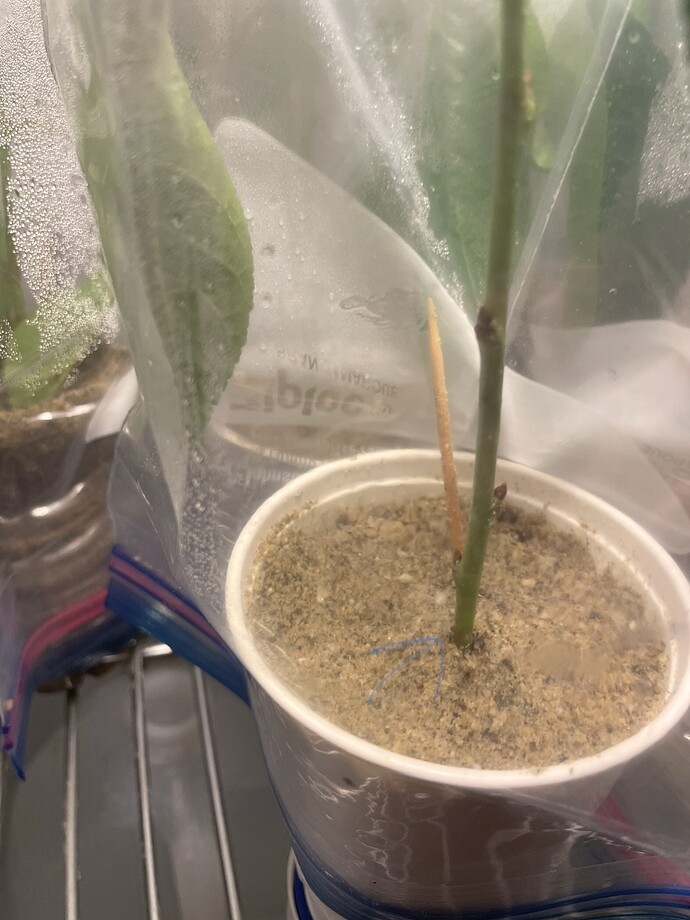