Can this broken tree be fixed?

My neighbor told me yesterday,that they were going to be moving a fifth wheel trailer today and that is located almost across a narrow street from me.I planted three Pawpaws about two to three years ago near the street.There are also two plants in large containers and I pulled one back a ways,because he was concerned that it might be in the way.
He assured me,the driver was experienced.
So,I came home after work tonight to this.The biggest Pawpaw I have,a Wabash,about four feet and growing for about four years,snapped in two.By the tread marks,it looks like the other ones were almost run over.My neighbor apologized and said the space was just too tight.
My question is,can the break be grafted together or should I discard the top?I did get some scions from Tony.Maybe one can be added there. Brady 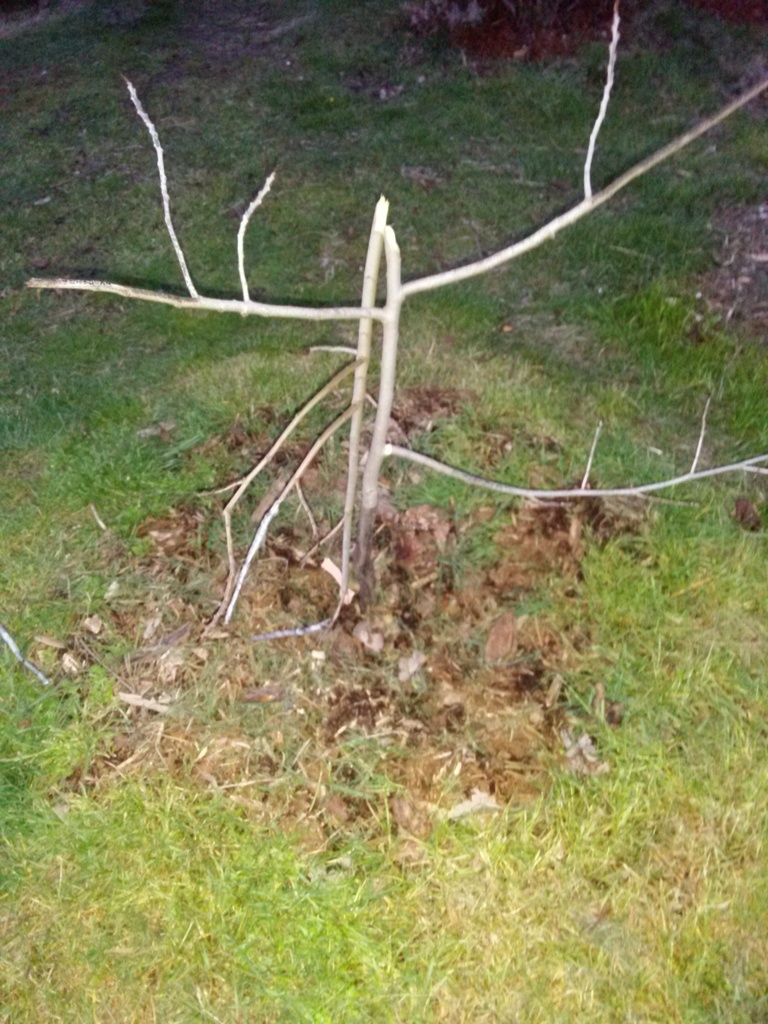 You could try it. You could also tell your neighbor and the driver he hired to move the fifth wheel they are responsible for replacing it with one the same size !

I would cut back the top to the highest viable bud below the break. It will send up a new shoot facing the direction the bud is pointing. This can be trained upward against a stake to form the new leader. Any watersprouts should be headed back. Hope this helps.

Good thing it happened while dormant, and so high up. You could use the broken off portion to graft onto other trees, although the patent may still be in force. I can’t find the details.

I had a young pawpaw plant cut one off at the top like that one time where it was dangling and I just rubber banded and Parafilmed it back together and it became a union again. Not sure what you want to do though, could also let topmost bud become new leader as someone said.

I repaired an apple tree several year ago that looked almost identical to yours. Six years later it is doing well. The one I repaired was immediately after it was broken and the surrounding tissue had not dried out. I’m guessing that yours has already dried so I would cut it back to the next limb and carefully pull/stake it upright. The pulled up limb will grow rapidly. Bill

Sorry for the late response. I would pruned off the top broken leader and leave as much wood as possible above the 2 lateral branches so there maybe a chance a new shoot come out and becomes a new leader and remove that lowest broken branch . The tree will recover and will send out some new shoots below the top 2 lateral branches.

Thanks very much for everyone’s replies.I considered them all and decided to make a whip and tongue.I left what was available,above the laterals and still make a diagonal cut.I figure,if the graft doesn’t take,the top can be thrown away,but there may be a chance the thing will grow.
Concerning reimbursement Chris,yeah,that’s a tough one.That’s one of the first things a guy at work brought up.My living situation though is a little like the city man’s relationship with his neighbor,the mayor,but on a smaller scale and different circumstances.
The neighbor is also the manager of the property and we have a fairly good relationship which has taken time to cultivate.At first,his attitude seemed to be that I was kind of crazy to be growing fruit.But gradually after seeing the results and letting his girlfriend and her young son help themselves to some,mostly Blueberries,there has been some change of heart.The best part,I have been able to plant some trees,where maybe a different kind of person might say,no way.I still waited though,a couple times for him to leave so some could be planted,lol.
I read Tony,that yours are given straight urea.Will that be about the best stuff to use in this situation? Thanks again, Brady

I just applied about 1/2 teaspoon of Urea under the canopy of the pawpaw tree and watered it real well until all the Urea Nitrogen dissolved. In a week or so the leaves will turn from light green to dark green. A nice jump start.

Tony, do you use 40-0-0? How long do you need to water to see the granules dissolve?

I used the garden hose sprayer and water it for about 3 minutes. It dissolved pretty fast. Yes, Urea 43-0-0.

I had an apple tree about that size that had a weak spot from a rabbit . I came home from work and it was broken over. I just stuck it back together and taped it with electrical tape. The jagged break worked like a perfect whip and tongue and the tree grew back together.

I would have made a splint and just taped it together again- if the idiots had done this right after it snapped I bet the tree would have healed just fine.