I never thought of using them as a border for raised beds. Nice idea and they would actually look halfway decent and keep up with the weather, especially over the winters up here in Maine.

They’re durable alright. Janet didn’t like the plain masonry look so I affixed outdoor slate tile to the top. 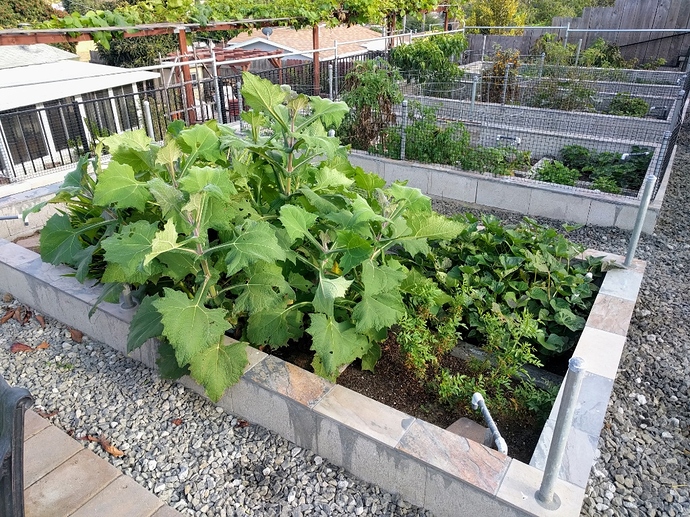 just don’t fill the holes with dirt as it expands when it freezes, cracking them in our cold winters. fill w/ concrete or leave them empty and cover the top.

A business near us has built a garden/picnic area for the employees and they put in these raised beds. The center is hollow for a compost chute. Some of the plants I’ve seen growing have been fabulous and are usually vegetables. They actually have an employee contest with a cash prize for the best “garden”. 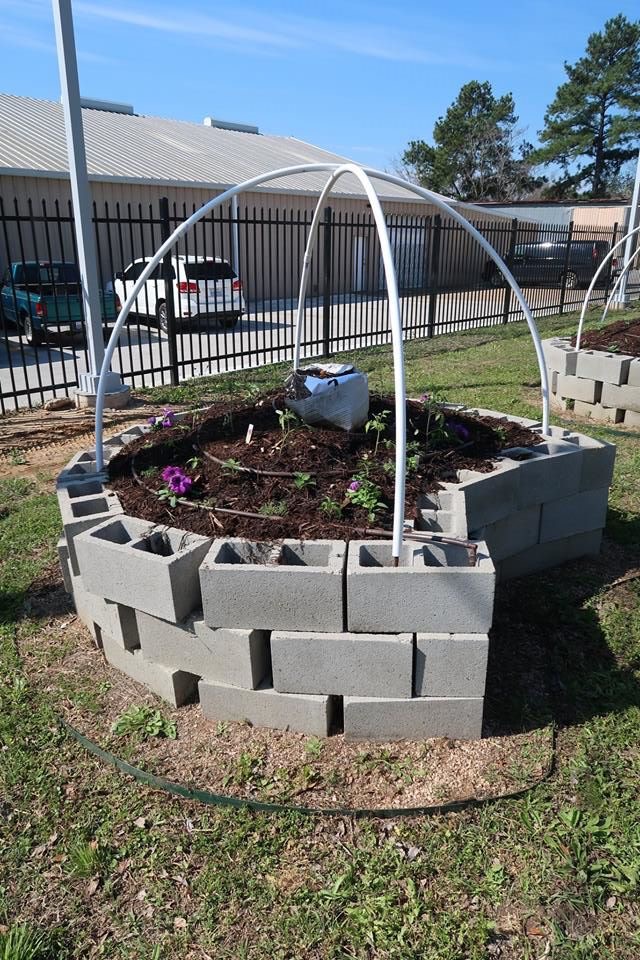 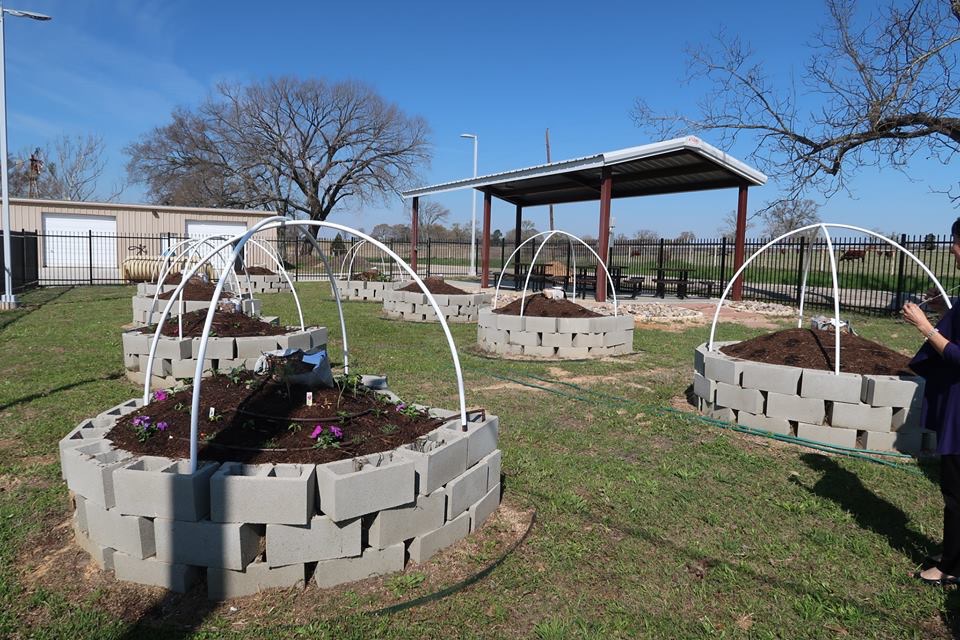 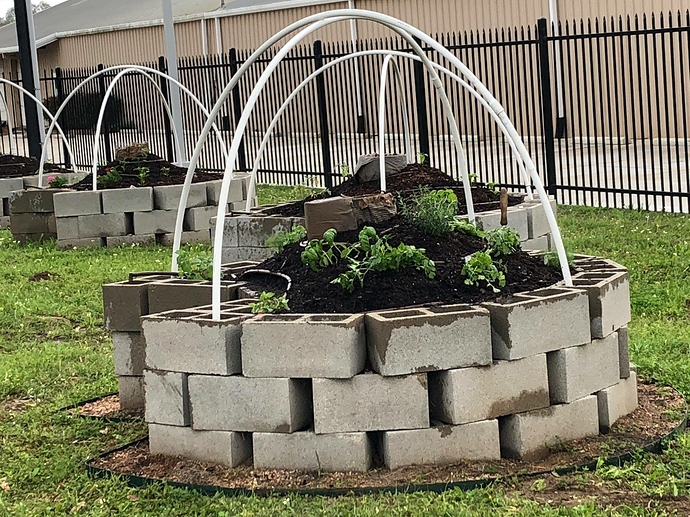 Too bad they’re not permanent structures!

You have a swell back yard. Bet you can grow everything in California!

You have a swell back yard. Bet you can grow everything in California!

I wish, but no. Black Currants and Cashews to name two. 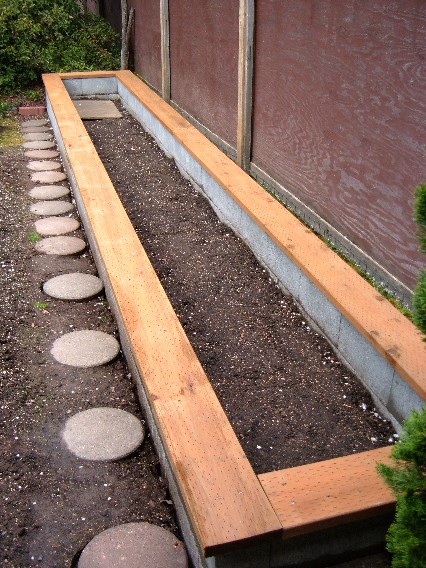 how do you keep the wood in place?

Every road in the country uses fly ash in the roads http://flyash.com/about-fly-ash/

Every road in the country uses fly ash in the roads

Decades ago, yes. Out here in the west it’s been replaced by rock dust from quarries and recycled concrete operations.

Thanks for all the replies, it looks like it will be concrete blocks with wood planks on the top.

The one thing I would be concerned about when you go this route is that you want a good seal between the wood and the tops of the cinderblocks. Otherwise you made really amazing slug habitats.

That is great! They may not have wanted permanent structures . . . just an experiment. I love the PVC ‘rafters’ for bird netting - or to make a cold frame of sorts.
There is a fellow who lives near me, who took different colors of ‘pastel shades’ of paint - and painted each block a different color. It is very cheerful - and in the right environment would be a sweet way to dress up the block. 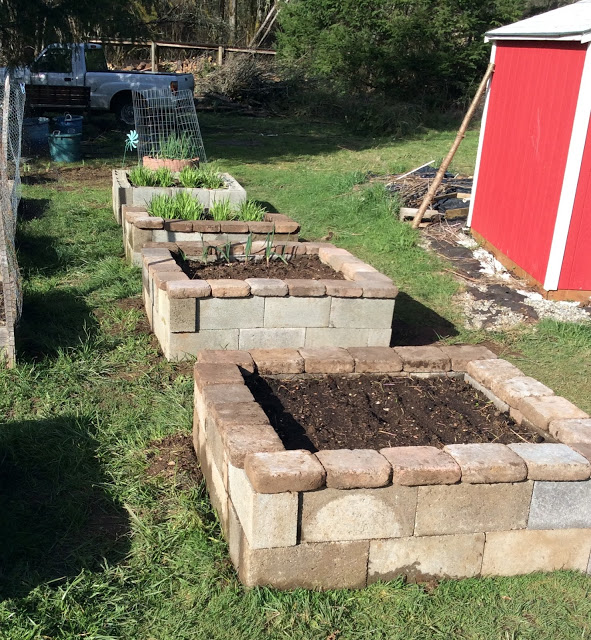 These are mine. I topped them with paving blocks. I’ve since rearranged them from 4 X 4 to 4 X 8 formats but the idea is the same. They work nice in my cool spring climate, warming up more quickly than wood sided raised beds. Peppers especially do well. Bought new, at about $1 a block, the price is right, too.

I never thought to worry about toxins. These were actually old blocks that I scrounged from various previous projects.

To connect the top wood layer, I just tapped some smaller wood pieces into the cinder block voids (every other void) and then applied deck screws. This mass-production is best done with a power saw (skill, table, etc.); not all voids are the same size and care must be taken to use only snug-fitting wood. Cinder blocks are actually quite fragile and hammering tight-fitting wood pieces into them will crack the block. After 10 years I replaced the void wood pieces with hybrid (plastic) wood scraps. Some of the original pieces had shrunk and fit the voids too loosely. 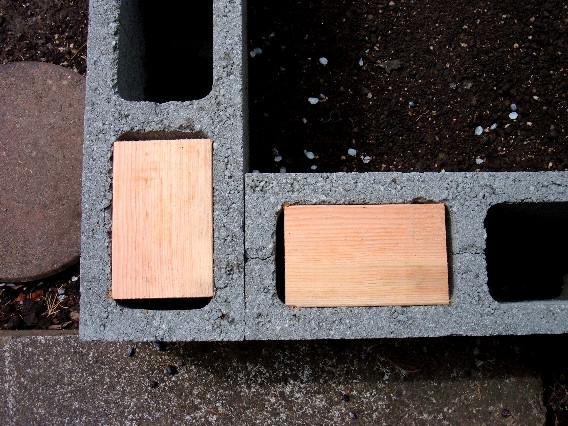 Thanks so much for posting that picture, I was thinking you had done it differently.

Now if I could get some corrugated galvanized steel siding runny horizontal and the top edge goes into a routed groove in the wood, that would look good.

Do you mean adding the metal on the outside of the structure, in addition to using the void wood inserts and top planking? This would require the planking to overlap the cinder blocks considerably and might require using 4-inch blocks rather than the 6-inch blocks pictured above, unless you use 2x10 planks. It would be easier to attach via nails or screws the metal to the edges of the planks. To avoid exposing the sharp edge of the metal, create a recess in the plank edges via power saw. I would be concerned about the metal getting hot.

I also built a 8-foot tall trellis system atop the raised bed and the planking allowed for walking and even ladder placement without disturbing the blocks.

Aren’t those 2x6 you used? If so it looks like there’s enough room underneath for the corrugated to fit. Just as long as the corrugated is cut at the closest point to the blocks. If it’s only a 1/4" overhang or less, then I might have a problem.

As a matter of fact, what’s a day without problems? That would be boring.

My blocks are ~6 inches thick and the top wood is 2x8 (~ 7.5 inches). I have an outside wood overlap of the blocks of 1.25 inches; you could increase this to over 1.5 inches by just putting all the overlap on the outside of the blocks and leave the inside flush.