Madeleine, or Citron des Carmes (of John Lindley, 1828; Robert Thompson, 1842). Madeleine (of Louis Noisette, 1839), Citron des Carmes (of Duhamel, 1768), Magdelen, Green Chisel (incorrectly), Early Chaumontelle (incorrectly). The Madeleine is one of the most refreshing and excellent of the early pears; indeed, as yet, much the best at the time of its ripening - before the Bloodgood. It takes its name from its being in perfection, in France, at the feast of St. Madeleine. Citron des Carmes comes from its being first cultivated by the Carmelite monks. It is much the finest early French variety, and deserves a place in all collections. The tree is fruitful and vigorous, with long erect olive-coloured branches. Fruit of medium size, obovate, but tapering gradually to the stalk. Stalk long and slender, often nearly two inches, set on the side of a small swelling. Skin smooth, pale yellowish-green, (very rarely, with a little brownish blush and russet specks around the stalk.) Calyx small, in a very shallow, furrowed basin. Flesh wihte, juicy, melting, with a sweet and delicate flavour, slightly perfuned. Middle and last of July. – A.J. Downing, The fruits and fruit trees of America, 1846.

Citron de Carmes. This is a very fine early fruit - the size is small, not much larger than the Hativeau - the skin green, the flesh juicy, buttery, and highly flavored - the taste, when not too ripe, sugary. This pear Mr. Prince calls the early Chaumontel; it is one of the finest fruits of the season. – W. Coxe, A view of the cultivation of fruit trees, 1817."

I’ve only grown the pear for a year but I’m already excited to see how good the quality of the fruit will be in Kansas. The wood is a reddish brown color and very different from other pears. The background of some pears is obvious from the common traits but as mentioned this one shares no traits with any of my other pears. 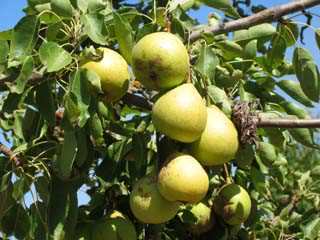 Clark, I have Citron de Carmes in my pear collection, so glad you’re talking about it! Going to save this great, detailed information. I think I purchased this heirloom cultivar from Sierra Madre Farms, which sadly is out of business. They grew some very nice heirloom pears and apples. I actually had a fruit ripen last year that I missed (I think 4th or 5th year in ground), I picked it VERY VERY late, and it actually was still very good, I could tell if I had picked it at the right time, it was going to be quite delicious. Enjoy these rare heirloom pear highlights.

Patty,
You have very good taste in pears! You definitely do your research. Varieties you grow in addition to this one such as Seckel and Abate fetel really are among the very best types of pears.

Thanks, Clark. I have a few interesting heirloom cultivars. I am actually hoping I can get my Suij pear to set this year. Not exactly an heirloom, but still, supposed to be a good pear. It wants to stay very very columnar, so going to work on trying to get branches spread a bit.

Patty,
Blossoms are forming on many of my pears this year. If I find any you can’t live without I will let you know. Weather is still up in the air.

Oh gosh, thank you, Clark! I did find out I can receive pear (peach, plum, cherry, nectarine, interspecifics) scions without issue, here. I called the CDFA last week to double check, and also recieved the okay in an email. So, budwood is fine, here. Was relieved to hear that. And, very sorry to hear about your weather. Those late freezes are just the absolute worst thing a fruit grower wants to hear.

This pear sounds delicious. Makes me want to try growing one here in Ohio. I hope to hear how you two like this pear when you get some more fruit. Great info ladies. I like heirloom fruit. Sometimes it is just the name that catches my attention or the story of how they found it or cultivated it. These monks always seemed to have a lot of good fruit wherever they went.

The weather is still up in the air at this point. No losses yet just early flowering so far. It surprised me last year when we wound up with fruit and it snowed and was mid 20’s while the trees were in blossom.

Shared as many Citron de Carmes scions as possible this year because I feel this is a pear that should be more widely grown. The Carmelite monks would likely appreciate that this pear is making a come back in these modern times.

anyone know how hardy this one is?

@markalbob
Its done great here in Kansas. I wont know how fire blight tolerant it is until it fruits.

Abate fetel aka abbe fetel can be a tough pear to grow but so far its doing ok here. It got down to -9F this year.

We hit -20-something this winter

Same here. It was a brutal few weeks of those low temps here as well.

@clarkinks and all of you amazing pear growers: does anyone have Citron De Carmes pear scionwood for 2019? Guessing there will be no GRIN scionwood this year…

First time poster - please forgive me if I was wrong to resurrect an old post. I actually misread “Jan 2018” as this year until I was halfway through my reply. It is scionwood season once again, so I thought it might make more sense to post here rather than start a new thread, which would likely prompt many of the same questions answered here, but if I erred, let me know!

@M.E.Schmidt
Just saw this reply from last year. Hopefully you located citron de carmes. Have not seen your posts in the forum. There is a scion exchange on this website but we do ask you hang around the forum a bit.

This pear has a few flower buds this year.

This pear has a few flower buds this year

Mine as well. Hopefully we’ll have something to compare in a few months.

Sounds great the weather may be a problem for us but soon we will know.