Have been asked to send flower and fruit samples of a pawpaw to the NCSU Herbarium. They gave me the directions except for the stage of the flowers to collect. The tree was bud swelling last week and we will have some 70-80 degree days this week.

Should I cut early, probably 2-3 days in mail down.

Don’t have the info to your question.

Well, I’d ask what the objective is for their samples. If they want pollen, later flowers are better. If they just want tissue samples, it probably doesn’t matter?

Tissue samples, but pollen is also a good indicator.

Maybe flowers at various stages. They are most striking in the latest stages.

I kept a couple I plan to graft inside this year, so these are on stems I don’t expect to leave attached, but they are the first flowers I’ve had open on my own trees, so I’ve indulged this year. I pinched most of last years out in the yard before they dropped. 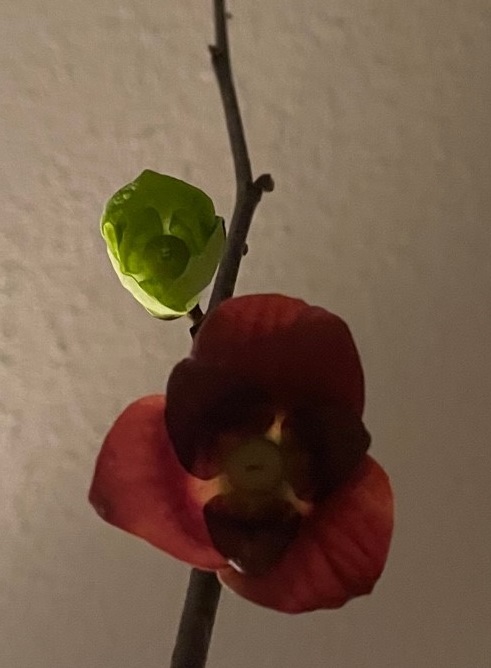 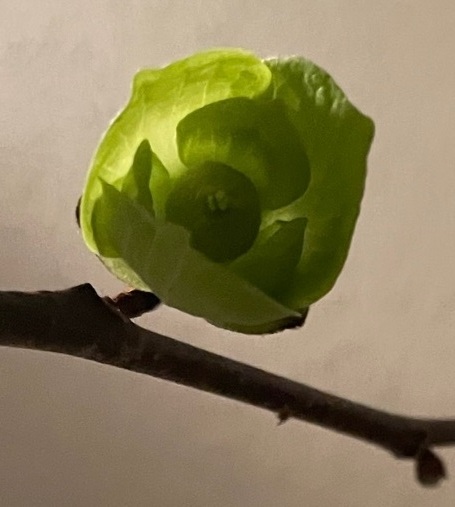 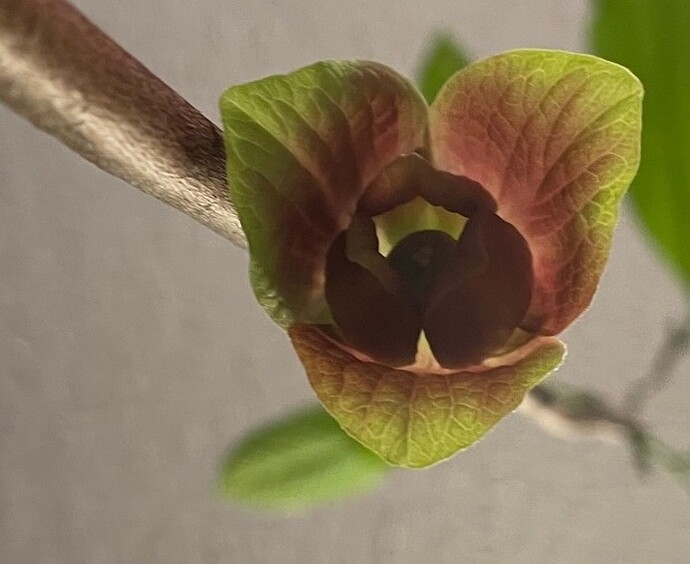 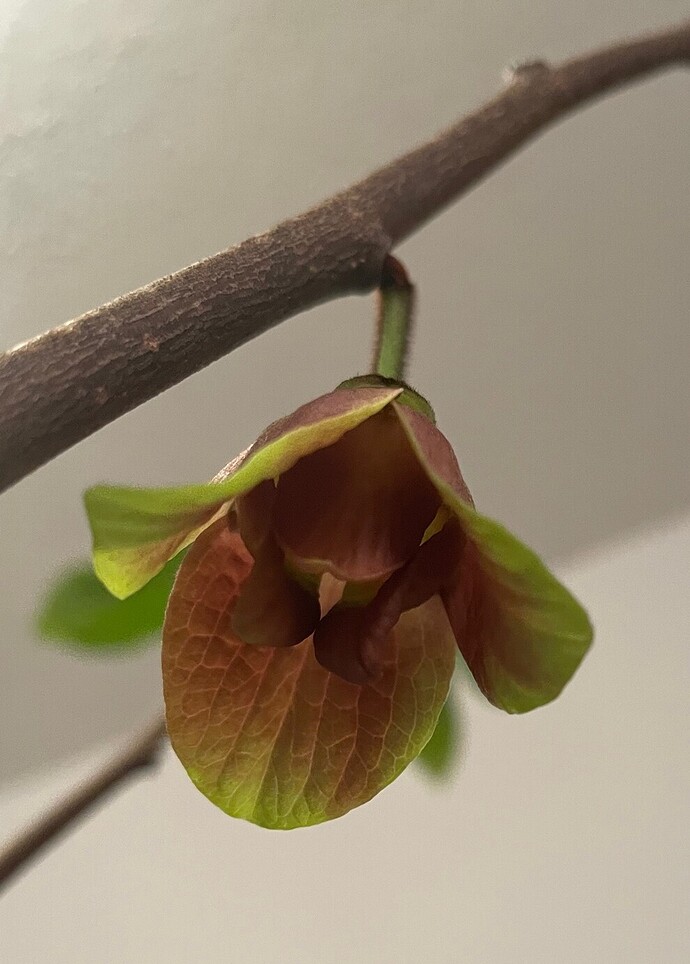 Went by today, the buds are as the small unopened green ones in your pics Clark…except they are dark almost black purple. On a related issue:

The County Ag Agent blew me off today for a third time, she was all puffed up because I contacted the University before her…today she’s decided she will not help collect material or aid in registering the tree, and “we have no mailing budget.”

Thinking of sending them flowers in several stages of bloom.

Extension Service is like a lot of other institutions that have “service” in their names…
good service
is hard to find these days.

Took her a week for her to take/answer my first three calls, then of course, “you are confused, it’s a plum.” She hadn’t even been on site. Lets be ugly to the old stupid grandpa.

I didn’t sleep through those two quarters of dendrology at UGA, well before she was born, and maybe her mother and father too.

I must add, the fruit scientist from the regional center in Fletcher, NC is a great person to work with!

Took some fine early flower sample and scion wood this morning. It’s on the way to the NCSU Herbarium today. The tree is not putting out many buds and they are not open yet. A sign of age? The flowers and buds are dark,dark,dark in color.

Have a few pics to share in a bit but on the way over the mountain to gather some branch lettuce for one of the farm’s spring creeks.

The dark appearance is normal at dormant stages for leaf buds and even for swelling flower buds for several days.
Not sure if it’s age, elevation (cooler temps) or genetics. But my young trees here in full sun in middle TN are fully kicking and 75% done flowering.

I’m about a half-zone colder than you, and those I have in the ground are not even starting to lift from the trunk yet. Still tiny and that same dark, dark. The flowers I posted pics of are on trees currently in my sunny bathroom since I bought them in early spring from a nursery that is at least a half zone warmer than you and awefully close to to the next half zone on the maps. Even they have some pre-pubescent flowers that haven’t dropped yet.

Carl, these aren’t open yet, beats me. Not many on the limbs either. Going to continue sending samples down to Raleigh as they open and set some pollen. The apples just started popping bloom TODAY! 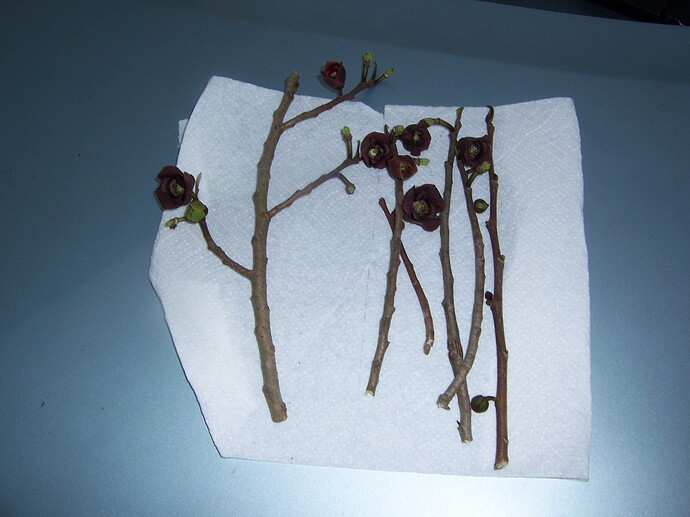 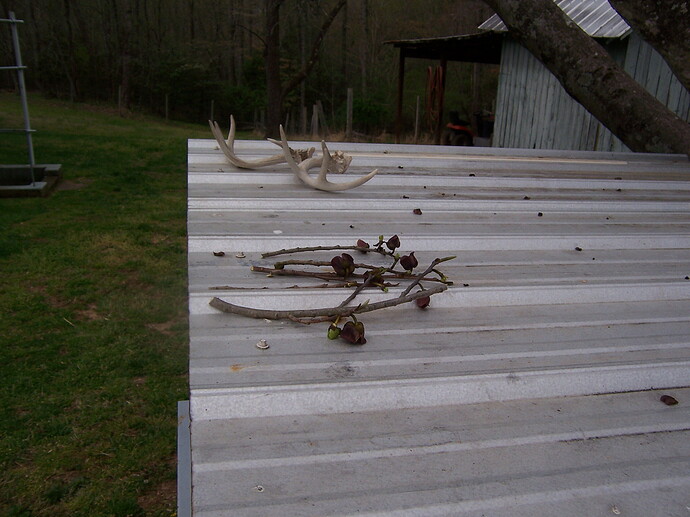 Did Woody want any scion?

Come harvest time if there is ample harvest, me and my old good fishn’ buddy Red Slackjaw are gonna render us up some purple pawpaw vermouth. Shoot, it’s good!

Oh, that’s not what I thought you meant by “not open”. Most of mine are still tiny little black balls that I wouldn’t know were flowers if I’d never seen the trees before.

Most of the buds, and there are not a lot, are still tightly closed. I collected what ones were open to send down to NCSU.

Collecting one bud per tree? Or, just any bloom(s)?
I’d think NC State’d have it organized.

Buds and open flowers/stems from the big mother tree only. There are plenty of sprouts off the runners if Randy wouldn’t mow them down.

The NCSU fruit man told me to look for those during the summer as they are specific for that tree. There are LOTS of trees nearby from seed, I didn’t collect them because I haven’t seen them fruit.

I don’t know when to dig these runner sprouts, summer or fall?

I’d avoid fall I believe. After Sept. there seems to be little or no root action until March or April.

Tissue samples, but pollen is also a good indicator.

Sounds like they are pursuing an mRNA study. This would help them determine which genes in the root cell chromatin are involved with flowering.