I’ve had limited success grafting cornelian cherries on to my two 6 year old seedling trees - less than 10% of the grafts that I’ve attempted have been successful, but I do have four takes. All have been veneer grafts with scions slightly smaller than pencil diameter and about 2 to 3 inches long with at least 2 nodes. I successfully grafted them in early spring during flowering and or just as the leaf buds are starting to break.

Initially I tried whip-and-tongue grafts with no success, and later I did bark grafts after the bark started slipping. Those grafts have served me well on pears, apples, persimmons, jujubes and pawpaws, but I didn’t have any success with them on cornelian cherries. I suspect chip budding might work as well, but I haven’t tried it yet. It seems that grafting to the tips of branches isn’t as effective as grafting lower down and then removing the tips above the graft once it has successfully taken.

I was very disappointed with the fruit quality of my seedlings - they didn’t compare favorably with the fruit I’d previously tasted. But this last year, the fruit were significantly better. So I mention it only to say that the fruit can improve as the tree ages.

Years ago I read that CCs in their home country are cherished fruit and some produce excellent, relatively large and quite sweet fruit. 25 years later I’m still waiting to see some such cultivars become available in the U.S. We need more species of pest free but delicious fruit. If they are also beautiful landscape plants, what could be better?

Yet I haven’t heard any reports on how good any of them are. They had them 25 years ago also, if my memory serves me well. I’m glad they still survive- so many small nurseries have come and gone since I got into this business. My first one was Bear Creek Nursery where I got my first Korean Giant pear among other things.

They did not put on much fruit, and what was there went from intensely tannic and sour to vaguely rotten tasting right before falling off. Hopefully the varieties I planted are better for fruit!

cornelian cherries are up there in antioxidant levels along with jujubes(both of which supposedly have more antioxidant activity than blackberries, etc). On our youtube channel i described cornelian’s palatability exactly as you did and got a comment from a viewer protesting my unfavorable assessment. Was actually happy to hear anyone criticizing my comment in the hopes that viewer probably knows something i didn’t know. So i admitted that only got to try few varieties of cc’s and politely asked which cultivar of cc might be described as sweet but sadly never got a response.
anyway, maybe someone else in usa knows of a cc cultivar that might be worth growing. Or maybe someone from eurasia

I’ve eaten fruit from several seedlings (planted at the local zoo) and there is a HUGE difference between right off the tree and after letting them sit on the counter for a few days.

Fresh picked: Even ones that are dark red and essentially fall off the tree when you pick them are incredibly tart and astringent.
After softening on counter: Palatable and even moderately pleasant. My 3yr old loves them. I’ve had batches of store bought blackberries, raspberries and blueberries that are more sour.

I don’t think they are going to blow anyone away but definetly should be on people’s radar as a low maintenance no spray option with some landscaping value as well.

I never even thought to let them sit… good idea! Thanks for sharing that, I will try it next year.

The ones I’ve had were as many others describe, sour and very astringent, even after sitting a few days. I probably won’t bother eating them on their own again, but probably will experiment adding different quantities to batches of cider to boost tannins there.

I haven’t tasted any of the named Ukrainian cultivars to see how good they are, but when I used to live in upstate New York I sampled the fruit from many cornelian cherry trees planted as landscape trees. The flavor between the trees varied a lot - some were just insipidly sweet or had a mealy texture. The best ones were juicy and had a bit of tartness to them like a good mulberry or sour cherry. They all need to be well ripened to have a good flavor as fresh fruit. The fruit from my two Cornus mas seedlings here in North Carolina has been disappointing. Most of the fruit falls before it is fully ripe and is too astringent to eat. But this year, the trees held on to their fruit a bit longer and some of it was marginally edible (i.e., not particularly sweet or flavorful, but soft and not astringent). Still not as good as any of the fruit I remember from more mature trees in NY, though. They aren’t precocious fruiters, and this past summer gives me hope that the fruit quality might improve as the trees mature. I’ve grafted two Ukrainian cultivars - Elegant and Coral Blaze - and I’m looking forward to comparing them once those start to bear fruit. I also have Hidden Springs Nursery’s two named cultivars - Bodacious and Chicago. Both are still young and only Bodacious has fruited so far. It was no better than the seedlings at this point, but I will give it more time to mature.

They would probably be a good addition to cider. I made a lambic beer with them last year where I let the beer age on whole fruit. The flavor was good but if I were going to do it again I would mash the fruit up first because I didn’t get much color contribution from the fruit in the end product. I think I went with 200g of fruit per liter of beer.

With regards to fresh eating - they need to be picked dead ripe (dark red and falling off the tree) then sit at room temperature untill soft, wrinkled and squishy. If you are eating them while they still have the texture of traditional cherries they are way too sour.

By that train of thought, it seems that many people prefer sour cherries only in pie rather than fresh eating. Surely there are good recipes out there for using these things. Relating to the zoo cherries - the bush between the Lynx and the Tigers had one very ripe cherry that fell as soon as I touched it. That was wayyy better than the others I picked but I had a very small sample size on my visit. I could see letting them sit to ripen and actually ending up with something sweet. I just sucked on the others throughout the zoo exhibits like a sour piece of candy lol

thanks! so i guess just needs to ripen/dry up further off the tree to make it more sweet and less sour. Am actually interested growing it here(las vegas)and curious how it will fare on alkali soil and in our oven-hot/dry summers.

I’ve had exactly two bites, borrowed off ornamental variety trees in a nursery lot. They were sour and a little tannic, but not awful-astringent like unripe persimmon. Tasted to me like Carmine Jewel (very sour pie cherry) crossed with a dry red wine. I would have happily nibbled the rest off the tree, so I promtly ordered three trees (Sunrise/Pioneer/Coral Blaze). But I like very sour cherries, so…I expect to love them, but don’t expect them to be a hit with all my neighbors.

If my trees thrive, my plan for processing is to skip the pitting, simmer them down whole, and then run the whole mash through a food mill. Dunno if it will work, but I’ve seen several jam recipes that never remove the pits at all, so I don’t see why not.

I simmer them and use a sieve with a pestle to push some pulp through. Makes an awesome delicious syrup. Goes good with vodka and tonic. I also like putting in lemonade and iced tea. Raspberries are the bomb. I grow tons of them so I can eat them daily and save enough for syrup. The sieve is fine enough to remove all seeds. Takes only a few minutes. Black currant is right up there for me too.

For me Cornelian Cherry always Yea. I remember them from my childhood in the area near North Caucasus and Black Sea. I never knew the name in English, people there called it Kizil. I got 2 that I planted this fall, one is grafted on some other dogwood rootstock and looks like a tree, the other one has bush form. I am still looking for the 3rd one, I want Cornus Mas Yellow. 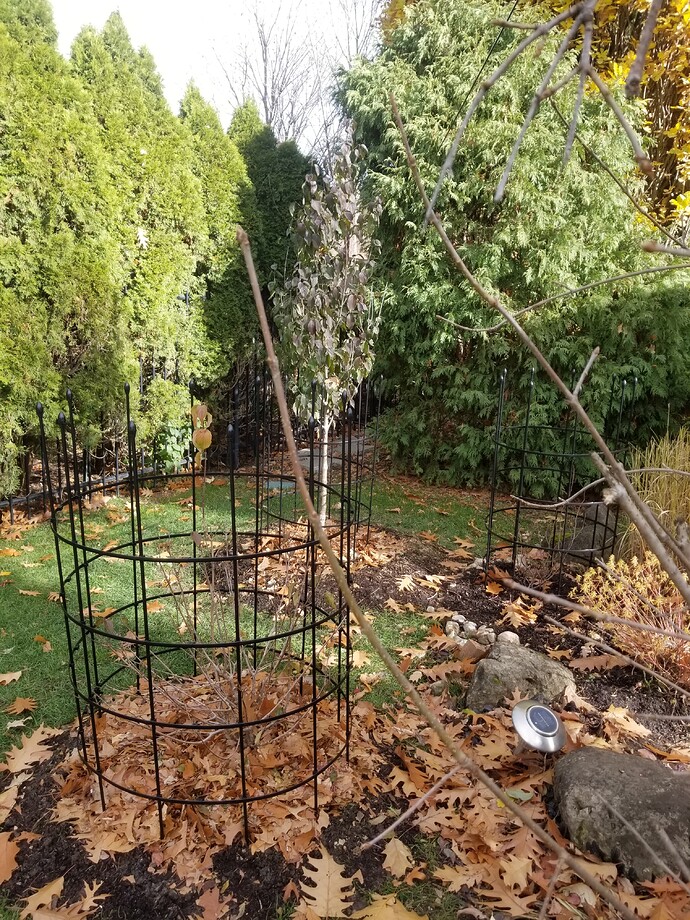 That treelike specimen looks good. Cornelian cherry usually grafts only to cornelian cherry, but this rootstock looks different…cornus officinalis perhaps? The best yellow fruited kizil is called Nehzhnyi and was bred by Svetlana Klymenko in Ukraine.

Try to find one.

That one I probably won’t be able to find here in Ontario, Canada. Nehzhnyi ripens in late July to early August I read, there might be Yantarnii available in Spring. Yantarnii cv. Ripens in September. Both have yellow fruit