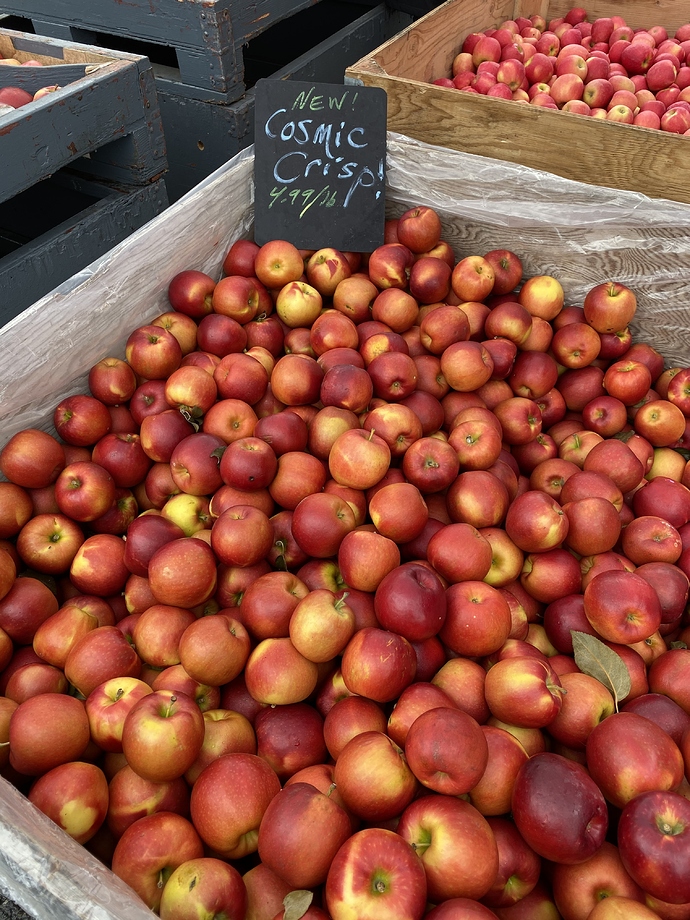 How do they taste. That should be a fantastic apple at that price. I pay .99/lb for large Honeycrisp grown in NY.

I just bought them along with several heirloom varieties: King David, Sweet 16, Spy, Macoun. Will do a comparison later today

I think the price is a function of rarity. It will be a lot cheaper next year

I’m thinking of introducing a variety called Gold Digger™. It will be a bargain at just $10/pound

Where did you get them? They look like peaches from a distance.

I don’t see the characteristic lenticels, and a little surprised to see them all jumbled in. I guess these aren’t getting the egg crate special treatment.

Holy Guacamole! At that price they should cure heart disease.

On the other hand, I did order a Cosmic Crisp ® minidwarf tree for my new mini-orchard. Usually I figure an apple tree pays for itself if I get 30 organic, free range, ethically harvested, vegan apples from a $30 tree. That’s at $1.00 an apple. With “Cosmic Cost”, I only need 7 apples from a $35 tree (roughly, I didn’t memorize the price). Way to go!

OK
I just tasted them.
They have the exact same crunch as Honeycrisp. But MUCH sweeter and more tart. They also have a very unique aroma when you bite into them.
I also tasted a sweet 16 at the same time. But that was past its prime and had suffered some hail damage and was stored poorly. It was no comparison to the Cosmic Crisp.

I would put this apple head and shoulders above the best honey crisps I’ve eaten over the years.
Based on this one tasting, I’ve decided to order a tree. It is an outstanding apple. I’m yet to compare it with King David and Macoun. We will see how it stacks up.

I just planted my Cosmic Crisp tree week before last. Burnt Ridge was still shipping them last time I looked.

Olympia Farmers Market.
Should be open tomorrow as well.
I didn’t see any star burst patterns on any of them. The apple looks very similar to Enterprise— one of the parents and has the characteristic crunch of Honey crisp. It is one of the largest apples I’ve seen. Almost as large as the Japanese Sekai Ichi.

I believe $4.99/pound is the highest apple price I have ever seen! Congratulations to the grower.

I’ve never seen such a high price either even in very expensive Seattle area stores. Clearly there are buyers.

Well everyones can buy a tree now at Burntridge mursery.

Burnt ridge is clear that they only sells Cosmic Crisp to WA residents.

If that was the case then We still can go around it by asking other members in Washington to make a big order and re ship them. That is the only solution I can think of.

Hmm, dunno what the law says about buying/selling used trees. Its not like they make us sign a contract when we order the tree. Then again, an illegal distribution network crossing state lines could be a RICO case? Are there any legal professionals on the forum who could clear this up? I would hate to see someone blunder their way into legal trouble

In the end, growing fruit is just a hobby. A great one, and healthy, and engrossing, but I would not risk a legal issue for it. That’s just me, but I don’t think it’s worth it.

I don’t know if you need a phytosanitary permit to ship live plants to all states. They probably differ. But that is also something to consider.

With almost any of the newest, best, most exciting home orchard trees, after a year or two or three it’s like, that wasn’t worth it for many of us. Nadia plum, Bella peacotum, various pluerries.
I realize that for each of those, some people love them and have successes, but most sometimes seem like a lot of hype and not much more, to me. As for Cosmic Crisp, it was developed in WA State, for WA orchards and for the Eastern WA orchards at that. Im thinking, irrigated high desert. I read somewhere (Raintree?) they might not ripen properly in my maritime, SW Washington yard. With hundreds of varieties available, I would not be upset about not growing that one, or even any of the club apples. My humble 2¢

The apples I picked up were grown in Eastern WA. I am not sure they’d be as good grown in Western WA. Have to look that one up.