I have a Columbia Star trellised on each side of greenhouse. Both planted 11 months ago. One became severely infested with aphids in winter so I cut off the old leaves in early January after chilling was finished. The other still has last yrs leaves. New growth of fruiting shoots on floricanes has been 2-3 wks ahead with delofiation. I’m hoping fruiting will be that much ahead as well to spread out harvest.

The plant that was defoliated: 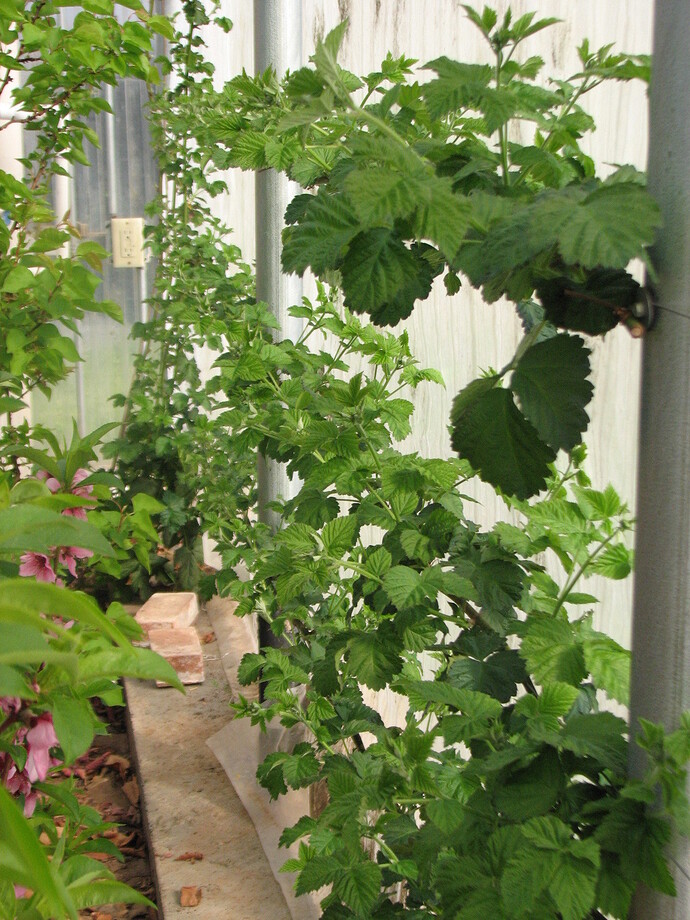 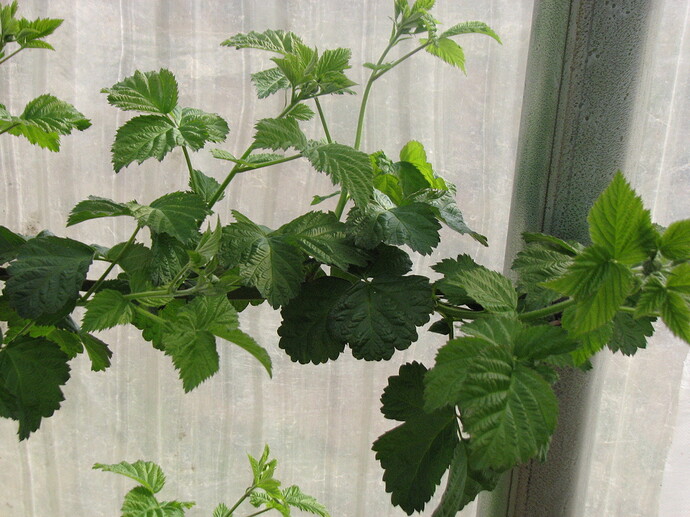 The plant not defoliated: 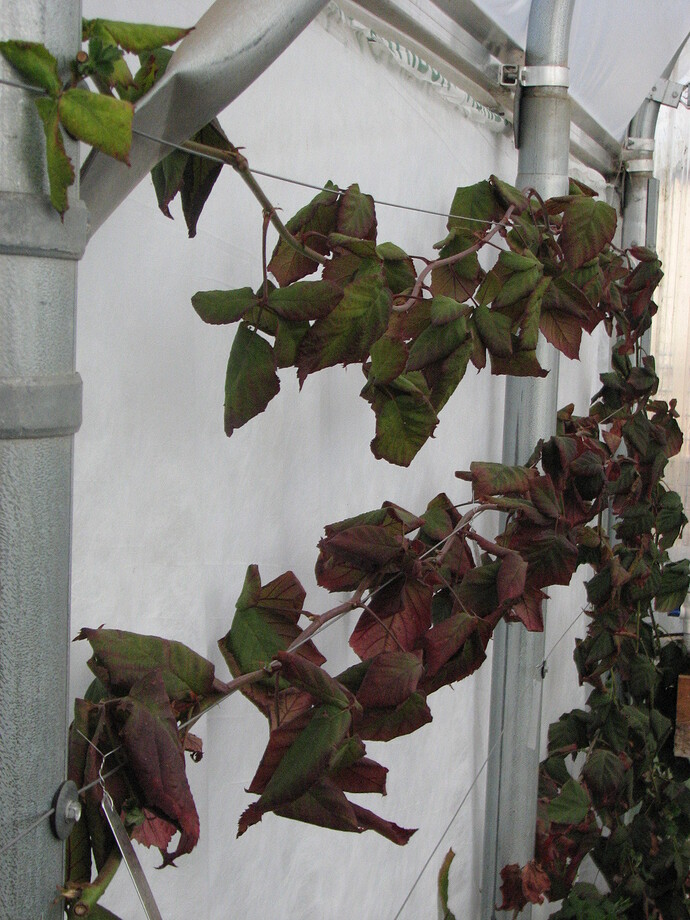 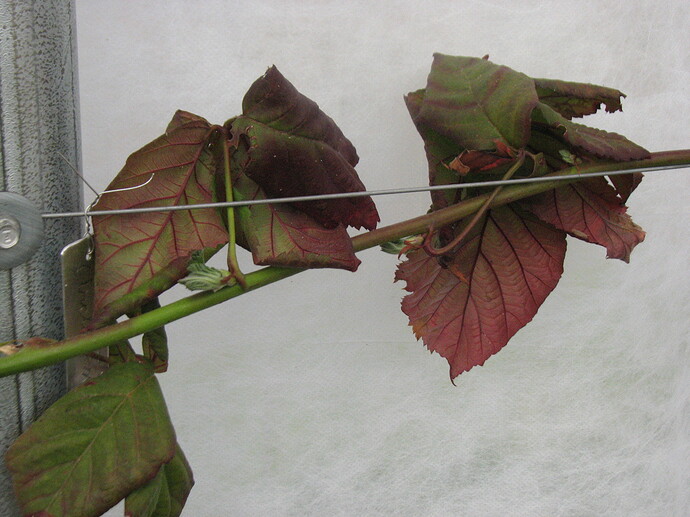 Wow, what a difference. Your fix seems to have worked well, and kept the plant healthy! My Columbia Star was slow to grow till late summer. It should grow like gang busters if it survived the winter?? My dog kept stepping on it and uncovering it. I’ll buy another and put in a better location, if it doesn’t make it. All my trailing types that the dog left alone look great! All green, never lost color. They were covered with leaves and burlap. I still can’t remove the burlap as the garden staples are frozen into the ground. Any uprights that die back I’m removing. I bought Darrow blackberry, it is supposed to be hardy, and may add Nelson next year. Just to have a reliable blackberry producer.
I also bought Newberry for taste, i should be able to protect.

I almost bought Newberry the last two yrs. The thorns have so far kept me at bay. I’m waiting on more of you to give an opinion on it’s taste.

Newberry is Bestberry for taste

It tastes like a 50-50 mix of raspberry/blackberry and has a ton of flavor and sweetness.

Newberry is Bestberry for taste It tastes like a 50-50 mix of raspberry/blackberry and has a ton of flavor and sweetness.

I want to cross Newberry or Columbia Star (Both from the same program) with Darrow and try to make a hardy blackberry with at least some complex flavor. But I tell you germinationg bramble seeds is tough! None of my seeds have come up this year. I’m not giving up, last year I had some come up after 2 months. Next year I’m going to sulfuric acid instead of bleach for scarification. I’m going to do batches at different times.
See what works best. Hopefully I can keep newberry and/or columbia star here alive long enough to do a cross. At this point I will not be doing a cross till 2017. Hopefully i can get germination down by then!
I also have wyeberry, marion and boyson also.
I should buy Nelson too, another super hardy but 25 bucks for three, and postage is 24 bucks. i got three Darrow’s for like $15.00 postpaid. Although from one of those crappy nurseries, all I need is one to be alive though…

Maybe I should still get Newberry this yr. I’ll check and see what’s available.

Raintree has them. I have high hopes for Columbia Star too, it’s from the same program. Jeez spring hurry up! It’s still a good month away here! Dang!!

Some good info on these cultivars including detailed lineage. I heard Arkansas goes after copyright infringements of it’s blackberries, and you know Oregon is making both of these available for breeders to use for free.
Newberry isn’t even patented, it is already 20 years old, but just recently offered. Interesting info below. Columbia Star is patented but breeders can use for free! Rock on OSU!! So anybody can offer cuttings or rootings of Newberry…

I ordered Newberry, Jewel and Obsidian from Raintree. Probably put these in pots just to test the fruits.

Jewel is the best tasting black raspberry I have tried, but I have only tried about 4 of them! What really makes it stand out is in jam!
I’m excited as I’m growing a yellow black raspberry this year from Tyler, who i don’t think is here? Here is a photo he took. Nice size for a wild black raspberry!
I have seeds to another yellow cap, a white cap, and a red cap. I have rooted cuttings of this yellow cap. 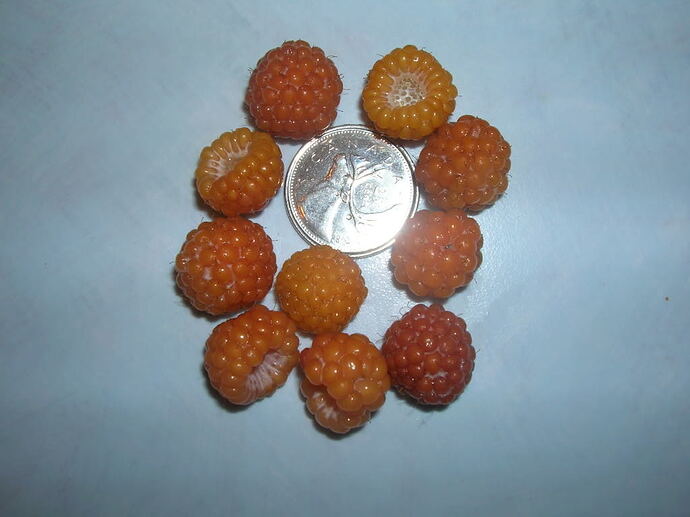 fruitnut,
I saw some earlier photos of yours,showing Blackberries being grown in pots and circling on a frame above the container.The Columbia Star looks to be strung along a trellis.Is that because the branches get too thick with this variety to do the same? Thanks,Brady

No it’s because I wanted to try them in the ground. They would work in a container wrapped up. Black Diamond works well because it grows much less. Appears to be a dwarf. The thorny trailing types worked well also.

I’m going to grow some in pots as I’m just plain out of ground to put them in. That may change if I pull any uprights this spring.
I asked fruitnut about that method, i have a black pepper vine I want to grow like the blackberry vines, Circle it etc. It’s starting to get big, it had a few corns too, but they aborted. the plant is young. It’s not supposed to produce peppers until it is 3 years old. It survived well in the house over winter.I also overwintered a regular pepper plant. I want to grow it into a tree. the plant produces large very hot peppers! Here are some fruits from it Species is
Capsicum pubescens, which produces black seeds. Not the same species as most peppers. This pepper is a rocoto
tree pepper relative and is noted for its cold hardiness, as it naturally
grows on Andean mountain slopes, this pepper will survive several
degrees below freezing. Plants grow to 2-6ft, can live for many years. 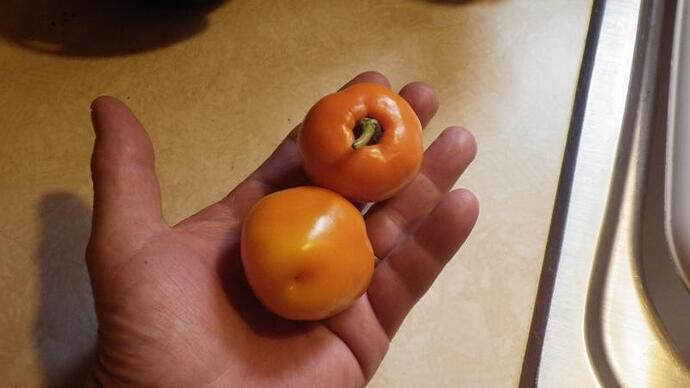 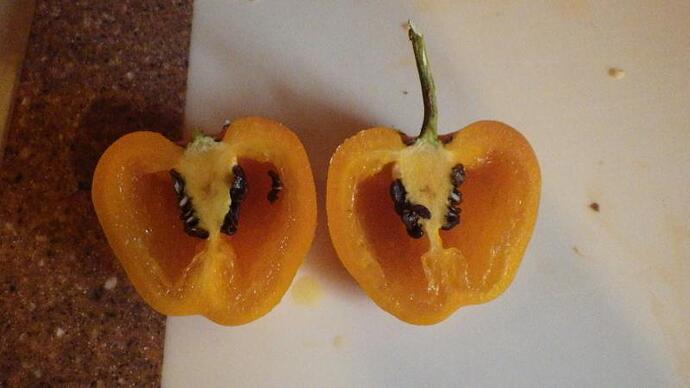 I was trying to work on my blackberry patch. I unerathed my Columbia Star. It grew more than I thought. Some of the canes are damaged from being under a huge pile of leaves, and the dog stepping all over it. I have fixed that now by putting a couple trellis wires up today. He no longer can go into the patch. Anyway some of the canes under the leaves still had leaves, some were rotted off. But I managed to pull a 5 foot can out and it is green with green leaves. It looks fantastic! We still have some freezing weather hopefully it won’t hurt it. I tied it up on the new trellis wires. It has five or six canes. 3 are only a couple of feet as they were broken. 2 or 3 are still buried and the ground is still frozen i can’t get them out yet. Still I pulled out 3 canes with 9 feet of good cane total. I also pulled out a 7 foot wyeberry cane that looks perfect. Covering them looks like it worked really well! It was well below zero numerous days yet they look great. The leaves kept the ground heat in and they all survived. I’m going to have a mess of blackberries this year yeah!

Drew, If you would like I could send you some seeds for a Habanero Tree. I overwintered mine for 6 years and it got to 9 ft. tall then I sold it. It was on its second growing season in the pic. 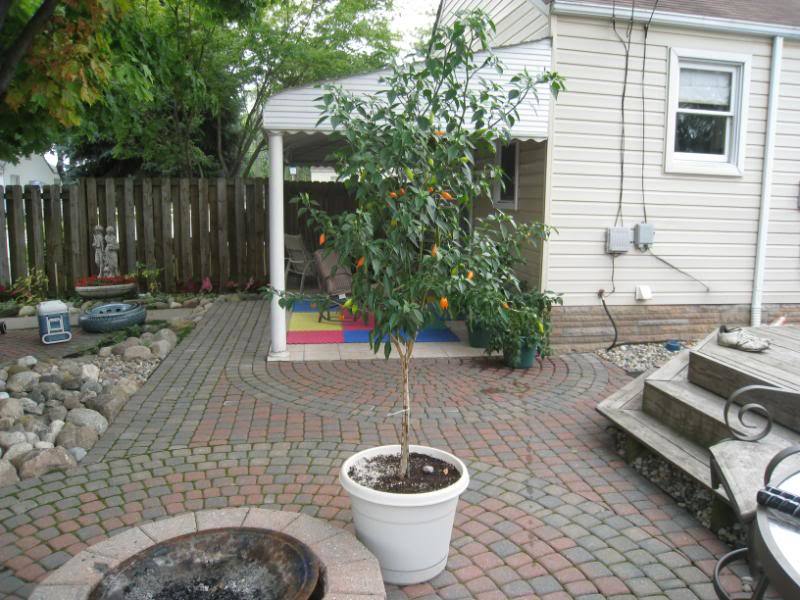 That is awesome!! I have some of those seeds, I’ll have to try them! But thank you! Awesome! I may request some if mine do not germinate.Orange and red ones right?

What a nice looking pepper tree! I don’t know it can grow into a tree like this. So at this point, it is a tree , not a perennial plant? What is its life expectancy?

No the name is Orange Habanero Tree. It is a perennial. I think a red Habanero tree exists too. Many peppers can be made into trees. I’m trying with the Orange Manzano right now. It grew 3 feet the first year, it’s still alive. I think it is going to make it, but it had a tough winter. They can live about a decade. It varies, maybe even longer?

How do you winterized the plant?

First I prune it down a lot, to kill vigor in the fall. i spray it heavy with pesticide to try and kill all aphids and other pests. I repot it in a smaller pot and root trim it too. I leave it outside another week. then i put it in a south window,
It still got aphids, and I had to treat it three times. It also had a bunch of weak grow. I recenly trimmed all the weak growth and I will put it in a big pot once I can put it outside full time. It has like 2 leaves right now. here it is. It’s hard to see but new leaf clusters are forming. it looks bad! But it will be fine! 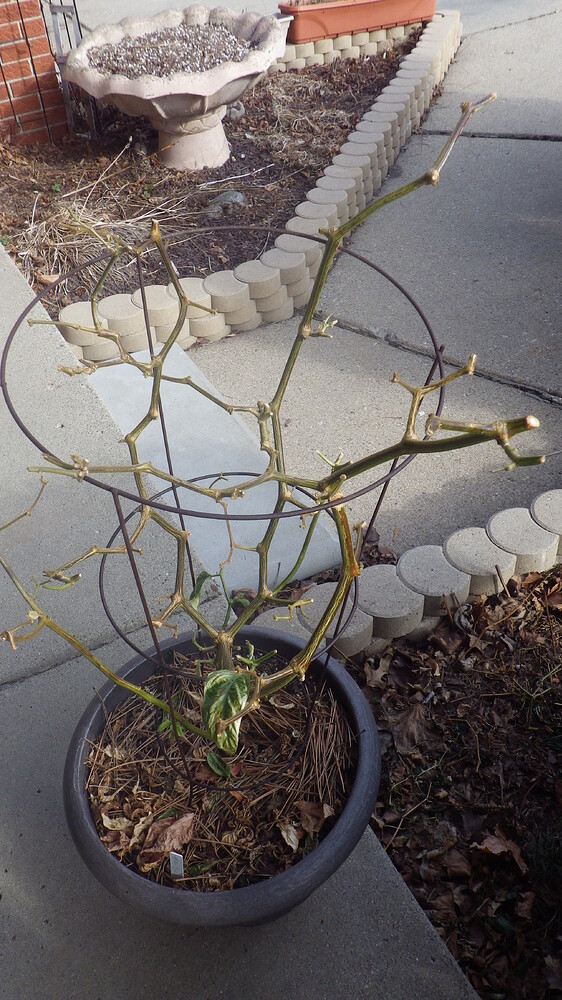 Drew, interesting, Thanks. I want to get a pepper plant to try to grow into a tree. Can I grow a tomato plant into a tree too?