So this big branch just split from the main trunk of my Pakistan Mulberry tree :(. Where do I cut it out? 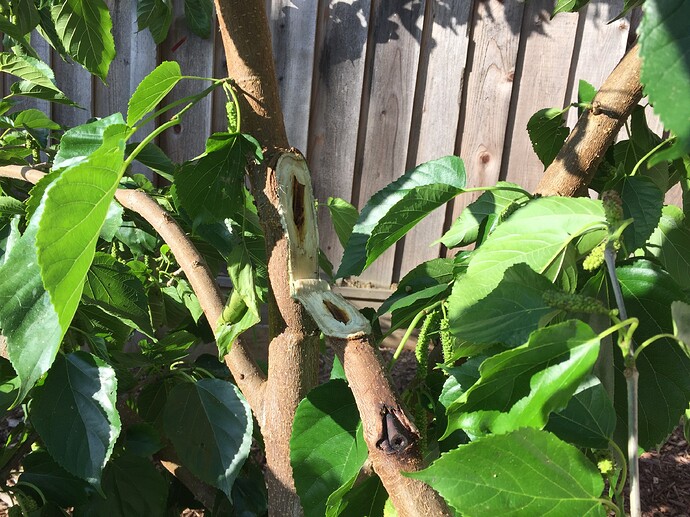 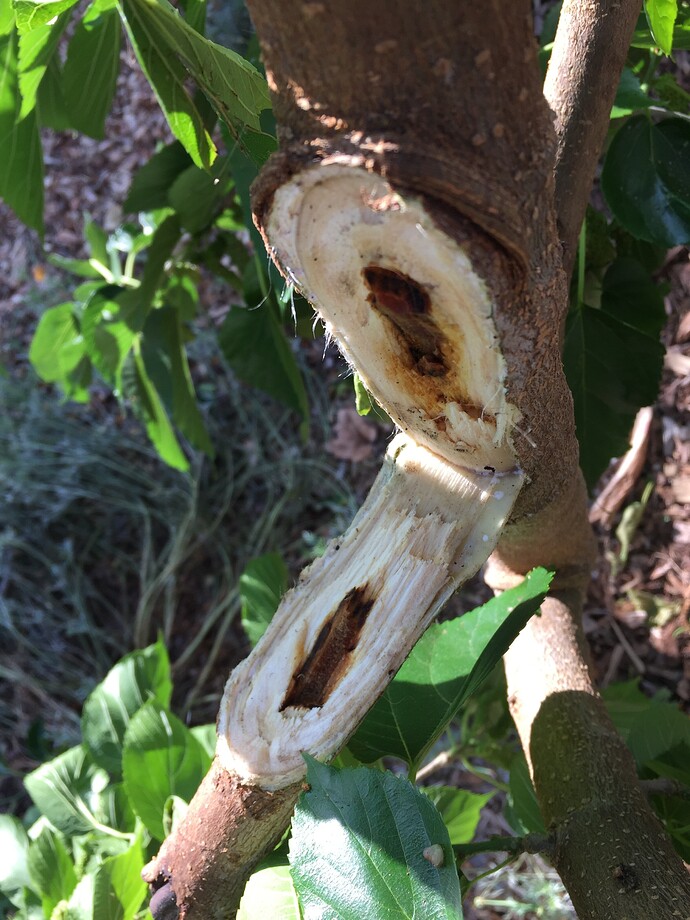 You can use a box cutter or a sharp knife and cut cleanly across the bottom of the broken branch so no more bark stripping then put on some prune sealer to protect the exposed area to prevent disease.

You can raise the broken branch back up since the bark still attack, tape it with electrical tape and then use rope to keep it in position. It will heal.

If you think you can keep it still, it will probably heal as mentioned, but make sure you seal it air tight and you wont have much strength in the branch for a few years, wind could be an issue. Id cut the bark with a sharp knife near where the top of break started on the branch. Peal the bark away and discard the broken branch and put the bark back over the tree. cut it as necessary so it is as close as possible to the bark on the tree and then tape it well using parafilm or electrical tape. It should heal over the summer and you can remove the bandage while it is dormant still, next spring.

put on some prune sealer to protect the exposed area

So you go against current thinking that sealer actually causes infections more than they prevent them? Keeping it moist invites fungal infection. Most Universities now tell you not to use sealant.

Vinod, you really have to stop climbing your tree’s!

Seriously, I had the exact type of break on my Zestar year before last and it healed up great.

Narrow crotch angles are a bitch… A little bondage years ago might have prevented this. 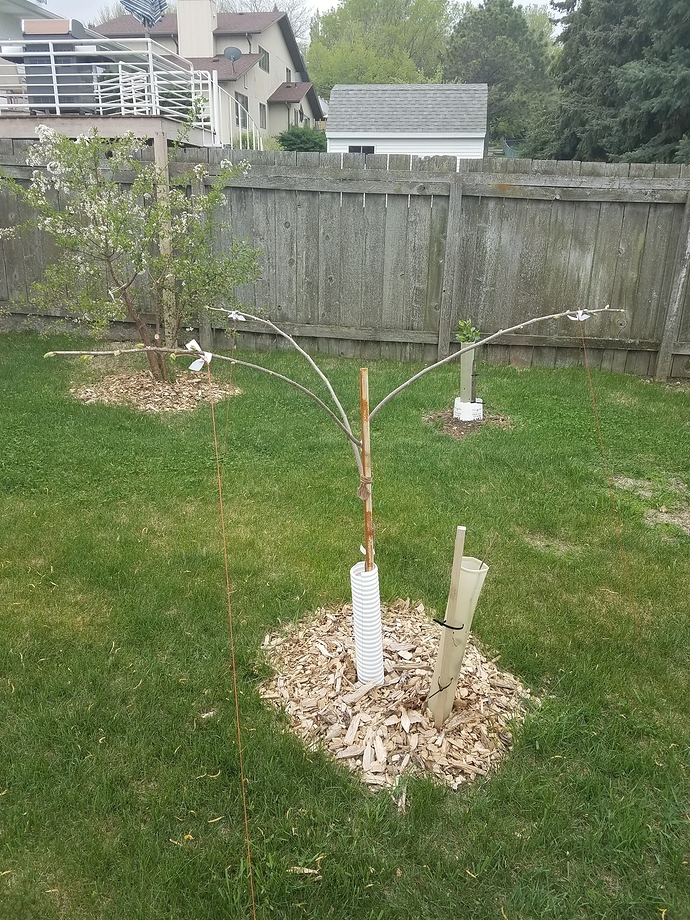 When I used a pruner with a clean cut then I don’t use prune sealer but long tear break like that then I put on a coat of prune sealer. So far, both ways worked out fine.

It was a bad crotch with included bark, so I wouldn’t try to re-attach it. I would get my sharp grafting knife and cut it free, and probably clean the sides so there aren’t frayed hairy slivers hanging out, but that tear is pretty clean. The cleanup is probably unnecessary. just don’t leave a flap at the bottom or let it tear further.

It was a bad crotch with included bark, so I wouldn’t try to re-attach it

Yes get rid of that mess. Taking it off will push growth somewhere else but most likely near the break. Choose something there with a good crotch and growing where you want or train where you want. It’s a mulberry it will regrow.

Sure pruning sealer doesn’t necessarily slow healing, it just almost never helps- unless you use something like Lac Balsam to keep out insects that transmit a disease common in your area. I’ve never needed sealer for that purpose, myself- but I don’t prune Dutch Elms.

When I really need a branch that breaks like that I often tape it back up with electric tape, but it can take 2 years to be strong enough to make it on its own. Sometimes I use splints when they are needed. I did that with a peach graft I discovered was not strong enough to spread yet just a few days ago. I’m sure I’ll save it.

I tied it up in a hurry since removing the entire thing is always an option.

Now the reason why I did not spread out the crotch angles was that the branch that broke off was supposed to be the central leader. At the time of planting, I topped the tree. But that cut never healed. Next year, another branch took over and grew more than this planned central leader. I wonder if the rotted core contributed to the failure. 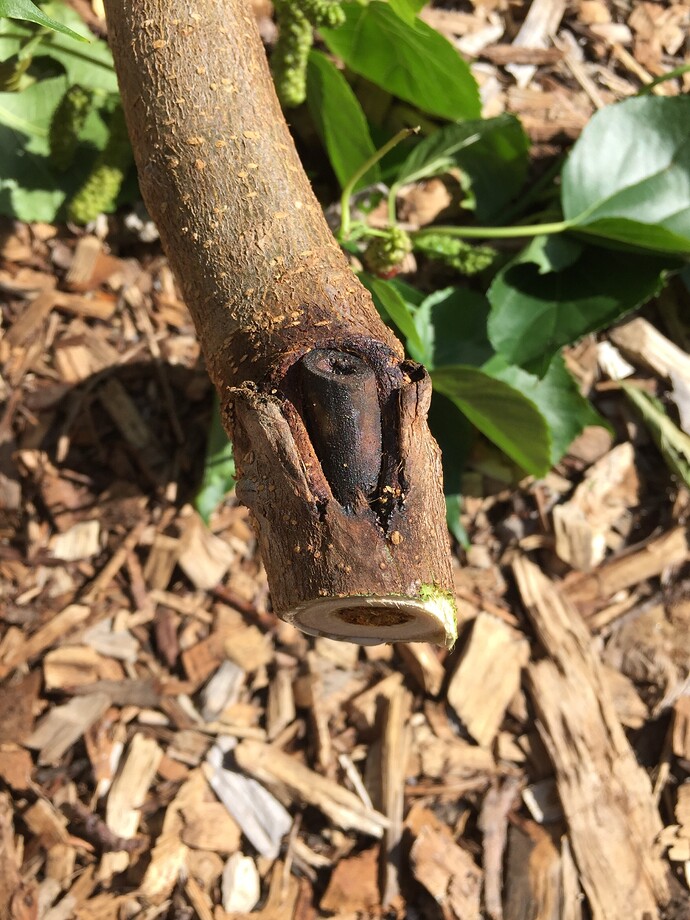 Narrow crotch angles are a bitch… A little bondage years ago might have prevented this.

Or even sooner, you can use clothespins to force down new shoots when they are 2-3" long and still green.