Does Anyone Recognize This Crab

We found these randomly growing among the trees at a pick your own orchard. They ended up being my daughters favorite apple of the trip. Does anyone recognize the cultivar? Browsing images of crabs hasn’t gotten me any closer. 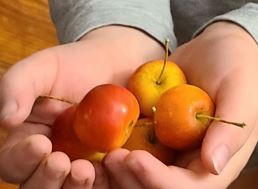 Perhaps trailmain? What time in the year were they ripe?

Hmm… probably not trailmain. I would expect that to be an august apple in your location.

Late September around here would be Chestnut crab or a seedling. The pic doesn’t look like my Chestnut fruit though.

That is still a good guess. Not one that came up in my search. Thank you.

I actually have a chestnut crab growing in my hobby orchard. Its still fairly immature but if I can beat the birds, deer, and bugs I may get a few off of it this year. Looking at images they seem to be larger and have less of a yellow tinge to them.

My new guess is Martha. The pic is a bit hard to see but is there a little splash of russet around the stem do you remember?

I don’t recall any russeting but sour is a good description of the flavor. Martha is a pretty crab. I was thinking of putting in a Dolgo next year but the breadth of options keeps growing. Maybe a crab franken-tree is in order down the line.

There ya go, problem solved …plant a tree and graft a dozen crabs to it, your bound to find one that is equally appealing as whatever you had before!

I grafted a young Martha tree last spring. Should have some scion in a year or 2 if that’s your plan.

Seems like a good plan. I’m still relatively new. I just performed my first graft onto my practice tree last week. Lots of learning ahead.

Did you try asking the Owner?

Now what’s the fun in that?

Playing internet crabapple sleuth is a far better game (but yes,good thought, I agree with you that would be the most time efficient place to start) 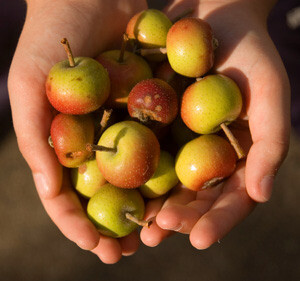 Photo looks a lot like pics I’ve seen of ‘Whitney’… but there are two ‘Whitney’ crabs in circulation, one substantially better than the other.

The ‘edible crab’/‘lunchbox apple’ deal is a winner. Most are tastier than 90% of conventional apples I’ve ever had.
Centennial (DolgoXWealthy) and Kerr (DolgoXHaralson) have been great here. Almata has been the most edible red-fleshed crab I’ve tried. Finally got Chestnut grafted this year… looking forward to sampling them in a few years.

Bastian Orange crab is our favorite… and though Jim Bastian sent me scions - and fruit - from his own tree, photos I’ve seen, that Jim himself provided, do not look like the ones he sent or that my tree produces(ripe in early to mid July here)… mine looks very much like Trailman… but I’ve not knowingly grafted Trailman (yet).

I have an email out to them but no response so far.

oh, btw it wasnt likely all that random. Crabs are often planted as pollinators.

Me and my daughter prefer apples with a higher acid sugar balance. Sadly what is available in my little corner of the world is what you would find on most grocery shelves. I’m doing what I can to grow a wider variety myself. Once I get reliable crops I hope to work with my local farm stand to provide the wider public with some more unusual varieties. We’ve lost a lot over the years.

Looks close enough to dead ripe Whitcombs, which are a delicious crab with plenty of sugar to go with that acid.