Some early peach varieties with low chill hours get damaged by frost too often. They have to Pay in order to Stay! Got to get the 20 foot trees through a 14 foot farm gate. 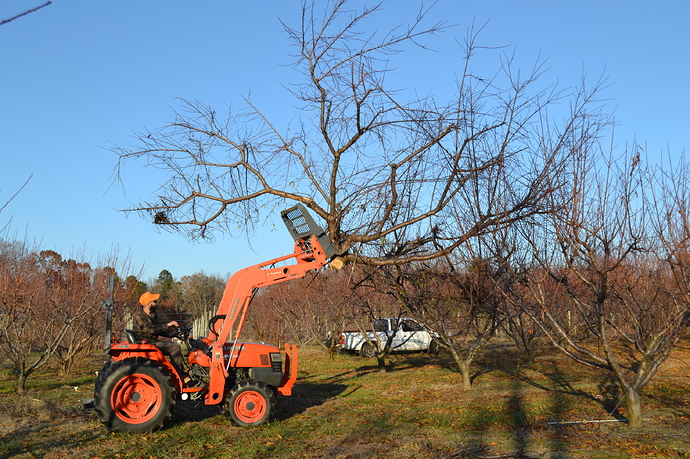 Which varieties are you removing?

Pay in order to stay. That’s a hard truth of us retail commercial growers. A tree which produces little to next nothing saps off a lot of labor for nothing.

I was taking down peach trees today. I can get them through a 2’ gate(as long as I’m not too fat to get through the gate)

Took this video today to post on our Facebook page. My customers are always asking what we do in the off season (as if we have nothing to do). Planned to post this on Facebook to show I don’t hibernate during the winter.

Your trees are massive compared to mine - I have one that is maybe 1/2 to 2/3 the sizes of your trees. One of these days I am going to try planting in mounds like you do - if I every find the dirt to do it. The one tree of mine that is large may have found my septic tank …

Enjoyed your video. I noticed you cut the trees into sections and removed them which is what I wanted to do.

My son wanted to remove the entire tree at once rather than in sections. It worked much better than I expected and he removed 25 trees in about four hours. I bet him $100 he could not do it and I lost

I removed all the Ruby Prince, half of the Rich May, Carrored and Flame Prince. Flame Prince was the only freestone. It ripens around back to school time which is a hard time for me to sell stuff

It worked much better than I expected and he removed 25 trees in about four hours. I bet him $100 he could not do it and I lost

I think you got the better end of that deal Rick, lol (i.e. removing 25 trees for a hundred bucks). I need to adopt that technique. Start betting my help $100 he can’t pick 15 bushel in 3 hours. I think he might catch on pretty fast though

I cut the trees up in small pieces to sell the wood. I’ve found it’s easier to cut them up while they are still standing than to pull them out first.

I can’t tell from the pic, did your son cut the tree off at the base first, or just pull them out? I’ve had trouble pulling ours out. Maybe because our soil is tighter. My tractor is 4x4 like yours and weighs about 7500 lbs. but I have to really yank on the trees to get them out and then sometimes they come out in pieces. It’s a little hard on the tractor so I don’t do it much.

I can’t tell from the pic, did your son cut the tree off at the base first, or just pull them out?

He cut the trunk flush with the soil line and stuck the pallet forks into the tree and carried it through the gate and 8 foot fence… Does your peach wood sell well? I thought about selling some too.

Each time I bet my son on a project completion time I loose but I get a lot done!

It sells pretty well. I just stick an ad on Craigslist and on my Facebook page. I don’t charge a lot for the wood though (compared to other Craigslist ads).

Here is my Craigslist ad. (BTW-I’m not listing this ad here to sell wood to forum members, as my wood is pretty much all sold this year anyway. Just posting it to show Rick how I advertise it.)

I always thought that would be a good idea. I usually save all my fruit wood for smoking wood, but then i use very little so i have a huge pile… I think i’ll just burn it in the wood stove

I continue to replace Reliance with Red Haven when they die off. I’ve accepted the fact that I will be constantly replacing peach trees in my climate although hopefully it will be at a much slower pace than this season (I will be replacing 60+ in the spring). We have about 280 planted trees of varying ages (up to 8 years in the ground).

We had a higher than normal mortality rate for some of our more mature trees (maybe about 20-25) last spring. Many of our problems almost always seem to start around the graft (canker) and root rot issues (heavy clay? wet areas?). Trying to figure everything out but our Reliance trees seem to consistently have the most issues (canker, leaf curl, sudden death). We have about 30 Reliance Trees left…the rest are split between Red Haven & Contender.

I also removed all of our plum trees because I was tired of dealing with pest (PC) issues.

We have about 30 Reliance Trees left…the rest are split between Red Haven & Contender.

I would be interested to hear your views on Redhaven vs Contender with repect to cold hardiness, productivity, disease resistance, and fruit quality (if it isn’t too much trouble) . You have a really challenging northern zone and a lot of experience. Your take on this would be very enlightening.

We have about 280 planted trees of varying ages

That is a lot of peach trees! Do peaches sell like crazy in Maine?

They do! We went from $2.50/pound in 2018 to $3.00/pound this season and no one batted an eyelash. In Southern Maine they charge $3.50/pound for PYO. Maine is at the end of the line for fresh fruit in this country so when we have local fresh fruit…it is in serious demand.

Between us and a much larger peach orchard in town that has been i operation for about 25 years…we have about 1500 peach trees! I jokingly tell people that Albion is the peach capital of Maine and right now it is.

I will compare our Contender vs. Red Haven when I have a bit more time.

I will compare our Contender vs. Red Haven when I have a bit more time.

I’m surprised Contender does so well in your area. It was developed about an hour south of me in what is now zone 7B. Its a great peach here and so is Red Haven.

At $3.00/pound you should be rolling in money during peach season!

Hey maineorchard, yours is a very interesting example of continental Northeastern peach growing for commerce, so I’m keen to bug you with a few questions, if you’d tolerate them:

What rootstocks do you grow on?
Are late frosts a frequent issue? How many years out of the last 10 have you (or the other Albion growers) lost a crop to frost or winter damage?
Do you see many borers?
Have you tried 24C or Harrow Diamond?
Thanks!
Derick
Zone 5b, Ontario

wish you were closer…

Currently our peaches are all on Lovell rootstock however we will be receiving Contender and Red Haven next spring on Bailey rootstock. This wasn’t by choice but I am OK with it since that was the availability and it will be interesting to see what happens on another type.

Late frosts have not been a frequent issue for us. Our springs are very late here so trees normally stay pretty dormant until late April. This is why we have avoided some of the recent bad peach seasons that some in Southern New England & the Mid-Atlantic have experienced.

We have not had a lost crop over the past 5 seasons however some have been better than others due to extreme summer drought. I did not pay attention too much to production the first few seasons other than the trees that actually died.

I don’t find too many problems with borers so far but we have had them recently in our apple trees so I am on the lookout.

I have not tried 24C or Harrow Diamond but the other orchard has both of those varieties.

And getting back to Contender and Red Haven comparisons…we have found them both extremely hardy and productive. Red Haven is more precocious in terms of growth and needs more thinning. Both get some leaf curl…Contender seems to be more affected by leaf curl due to its slower leaf/branch growth. We love the taste of both. Red Havens are super juicy. Fruit size (medium/large) is similar if they are thinned equally.

Have you had much experience with rootstock beyond lovell and bailey?

I have heard of people in my area (maritimes canada) planting peach by seed then grafting to the seedling to avoid graft union issues. Alternatively, I have heard of the same being done with p. Americana rootstock.