Dave Wilson Nursery 2018 Highlights will be published this month. Any guesses of what are they going to release?

My Top three Guesses are:

Also on the guess list:
Bella Sun Plumcot.
A Nectaplum.
A plum x apricot x cherry hybrid.
An aprium with some peach in its parentage.

DWN will probably release them at the end of April.

I sent a message to DWN about the status of the 2018 Highlights, and this is what they replied:

“We just got the catalog back from the printer for our spring mailer. The highlights is part of the mailer, so should be just a week or so until it comes out.”

Is Honey Punch that new? Brady 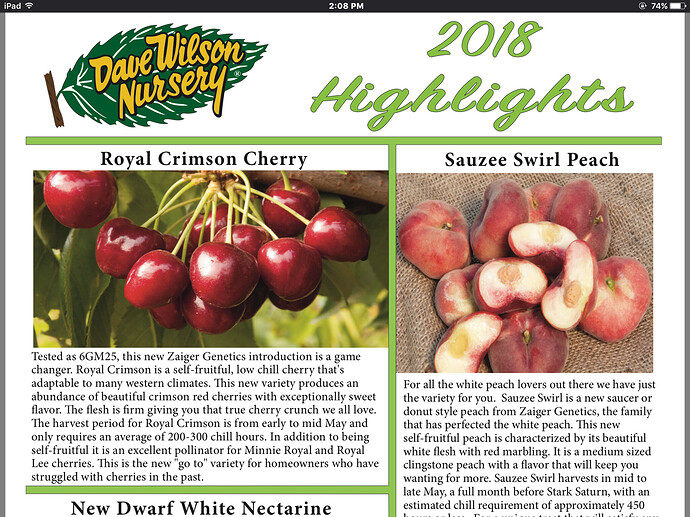 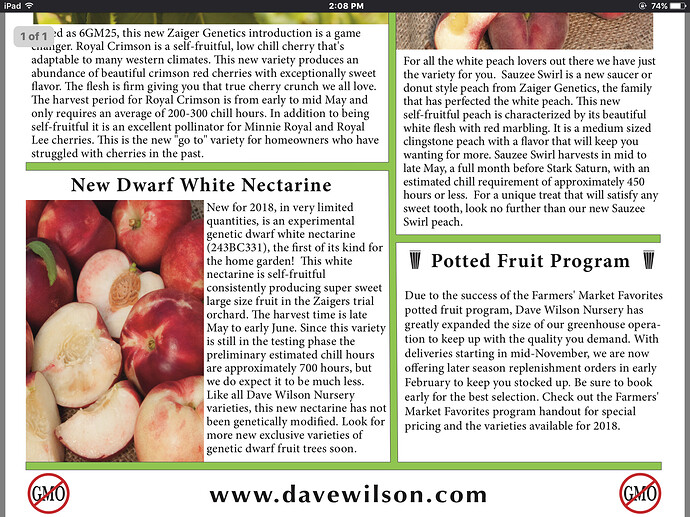 Kind of disappointing. And the fact that they try to sell royal crimson as the go to for people who have trouble growing cherries rubs me the wrong way.

Nothing exciting. I was hoping for a new hybrid.

The new donut looks interesting because it’s early. I don’t know if I’ll add it though, I already have 10 or so donut peaches and nectarines. If it only comes on citation, I won’t even consider it

I am with Ulises. Also, 6GM25 (now Royal Crimson) was already on the 2017 Highlights publication. Why mention it again?

Is Honey Punch that new? Brady

The devil is in the details.

No, you’re just too earnest. Let’s see you produce a more aggressive, advanced line of offerings.

Nothing here for me…but i’m glad…i’ve been trying to buy less and less. Grow out my own seedlings.

Grow out my own seedlings.

I prefer cultivars. Hope you come up with a good one!

If there is something that really catches my eye i’m going to buy…but right now i’ve got a lot that i haven’t even tasted yet and a handful of seedlings that are flowering…so i’m good. They’ll probably be some turds, but i think my seedling pluots that are flowering (seeds unknown) should be good (they came from one of my trees)… I’m excited to try all my Arctic series fruits (Rose, Glo, and Star)…

Well they have most certainly produced some very cool things, but they are not available to the home market. To me that is what is extremely disappointing. They have the goods, but we are not allowed to touch them. But those things never work and in this case they have not, just wish it was in the open.

but they are not available to the home market.

Some of them are – and are planted in my yard. I agree that having them all available would be a plus.