I squeezed my Geneva crab apples yesterday. I picked them last weekend when they started to drop without the help of the deer. Got three laundry baskets from the one tree. I figure that to be about four to four and a half bushels. These are not very juicy apples and definitely not dessert quality, but I don’t have a real bitter/sharp so I make do with these until some of my other cider apples come on. Froze the juice for blending later. I only got a bit more than eight gallons, but the pomace was pretty dry after pressing so that is probably about the best I was going to get. I’ll post some pictures tomorrow as doing that from this iPhone gets interesting.

Anyone else squeezing now?

Thats early! October is my usual pressing month since that is when most of the best cider apples come in.

How does the juice taste now? While that doesn’t tell everything about the final cider if the juice now is boring the cider will probably be as well.

I have an unknown crab that ripens in October which I have been propagating for my cider… all the other crabs are early and I only have time for one batch each year. Well, Wickson is also late but its a problem apple in my climate.

Geneva is early ripening and they were falling off the tree. I squeeze them and freeze for blending later. They might make an interesting single variety cider, but they are pretty tart. I’ll be squeezing Gala and Golden Delicious later, along with whatever I have enough of. I have about 30 varieties, but most of my trees are young and still only making very few apples so far. However, I’ll have a few Gold Rush, Liberty, Enterprise and Arkansas Black which may go in the mix if there are any left over from other uses. I also have a Whitney crab that produces gallons of small fruits every year, and that also adds “character” to my cider blends. Wickson and Virginia/Hewes crabs will be coming in in a couple of years, and the few apples I get from them this year may also get thrown into the pot.

I thought there might be some interest in my set up, though I have already seen what looked like better cider squeezing enterprises here. I was planning to build an apple scratter from scratch, using an oak cylinder from some wood I had on hand, with stainless steel screws as the teeth. There are several designs for those on the web, and a friend was willing to turn the cylinder for me on his lathe, but the chunk of wood I was planning to use split. Then time got tight and I decided to just buy a grinder from Pleasant Hills. It seems to work rather well. Here are some pics of the process: 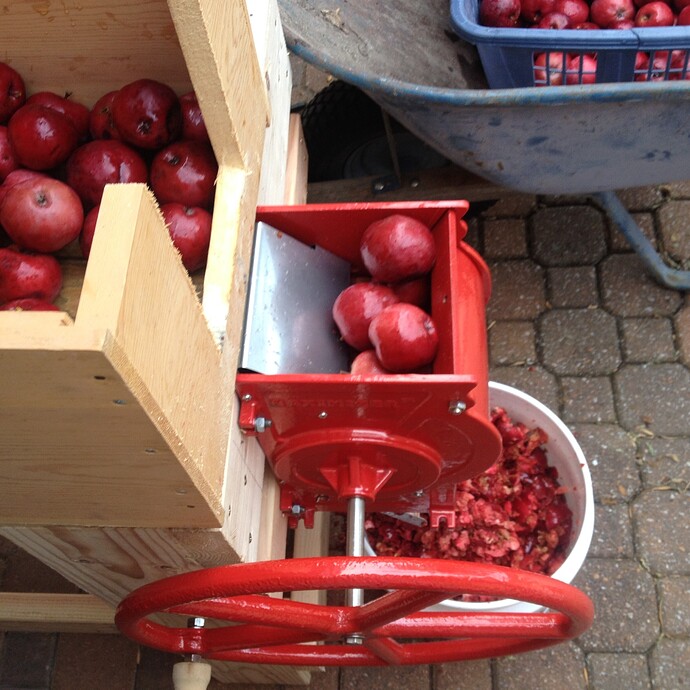 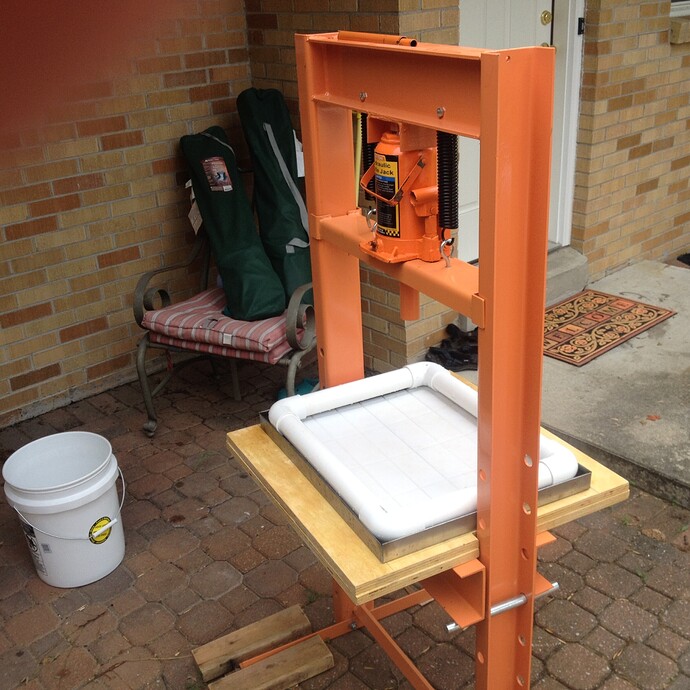 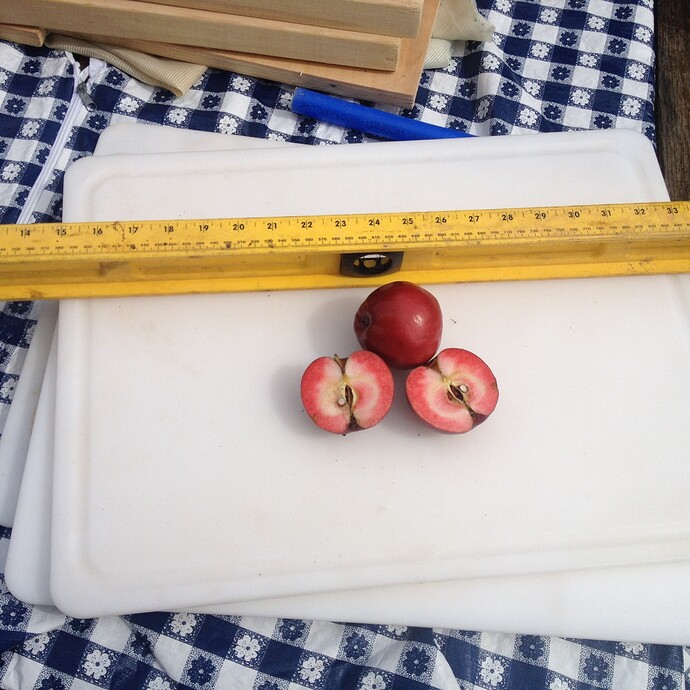 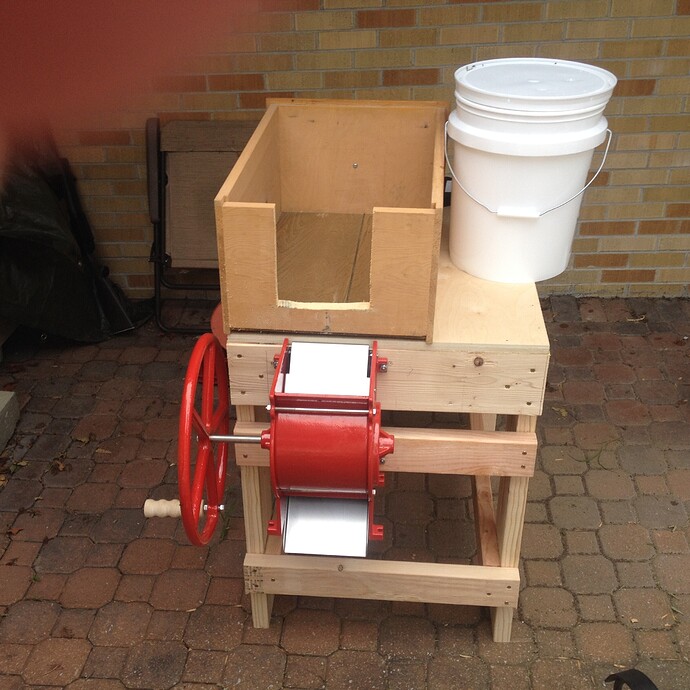 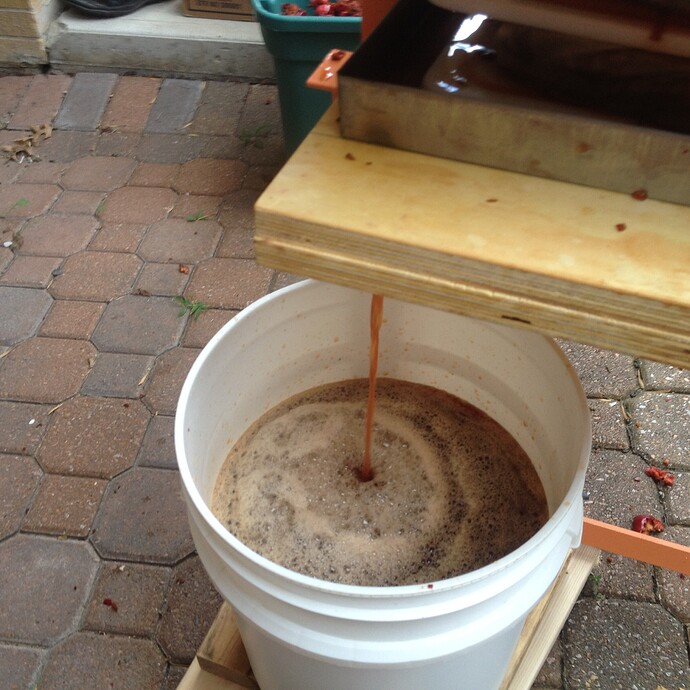 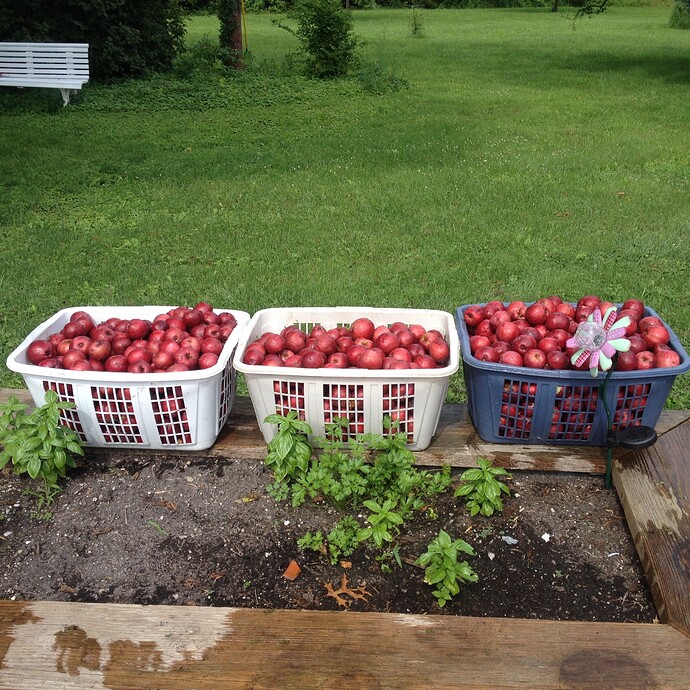 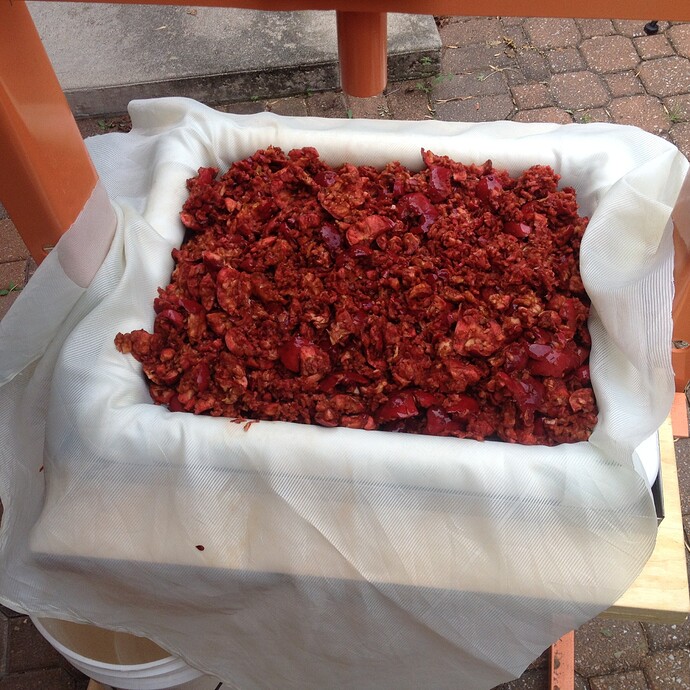 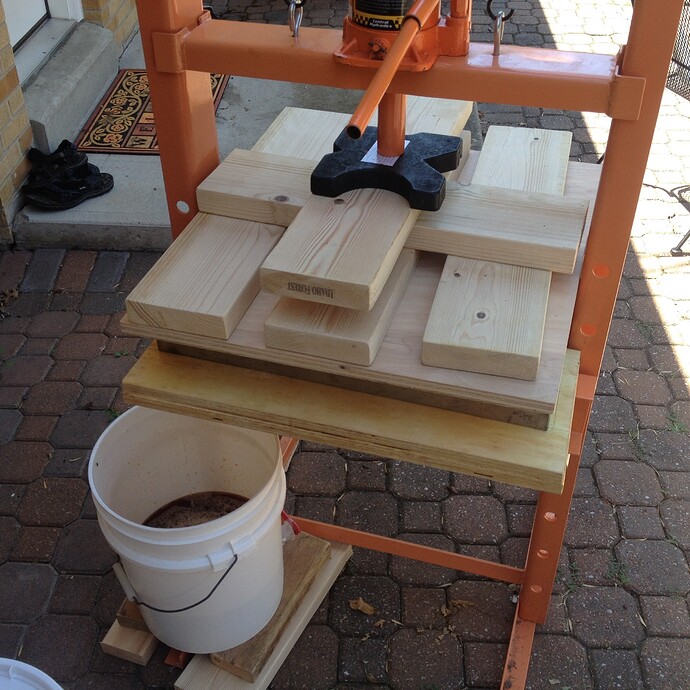 The throat of the grinder will allow at least a three inch apple. You can get a hopper to mount on top to feed the apples, but I opted for this really neat

bin made from a drawer I had laying around. Since the apples sometimes get hung up if more than one hits that narrow opening, I think my “design” might actually be better. The crank is fairly easy to turn and grinds the apples decently, though the last bit of most apples goes through as a patch of skin up to an inch or more in diameter. That is thin, however, and the attached flesh is well macerated, so I don’t think that is a real problem. My press is a Harbor Freight 20 ton, with a homemade press base I glued together using two pieces of 3/4" plywood. The catch pan is 18x22" stainless with a one inch lip and a 3/4 " copper down pipe soldered in. The press boards are 15x20" HDPE cutting boards from Walmart that I grooved and drilled a central hole in. The top plate is more plywood, but it doesn’t touch the juice because I use one of the HDPE boards on top of the last part of the cheese. The mold to make the cheese sections is just 1.5" PVC. The press cloth is actually just some nylon curtain material, which works fine except that it is a bit stiff and slows down the folding process somewhat.

I got about ten gallons of pulp from each basket of apples, and if I set up the cheese using four sections I can easily press a full ten gallons in on run. I managed to set the base plate too high this time, so I was just using a three layer cheese. I only got a bit more than eight gallons of juice, but as I said, these are not juicy apples. The spent pomace was pretty dry and compacted so I think both the grinder and the press worked decently.

Now just have to wait for some more apples to come ripe!

Wow, nice press. I have looked at several different designs on the web this year, but it is just dreaming as I don’t have any apple trees near fruiting yet. It looks like it worked great.

I told myself, and SWMBO, that I’d have other uses for the press. So far all I’ve used it for is pressing apples and once for holding a glue joint together…of course, that was actually the press base I made to use with the apples, and I had to use a bunch of clamps around the edge of that!

Nice looking setup for cider, thanks for sharing!

One other thing about Geneva is that the tree seems less attractive to Japanese beetles. Maybe they don’t like the red-ish leaves or something, and I have also noted that a Japanese maple right beside my orchard never seems to get hit hard by the JBs either. In another thread I have talked about how hard I’ve been hit by those beasties and it just occurred to me that I never saw many on the Geneva.

Question on that stainless tray. Where’d you get that? That looks like the cats meow…price?

@Chuck60 - I say your write up description of this (Your SIL in HVAC) in another thread so you can disregard, thanks.