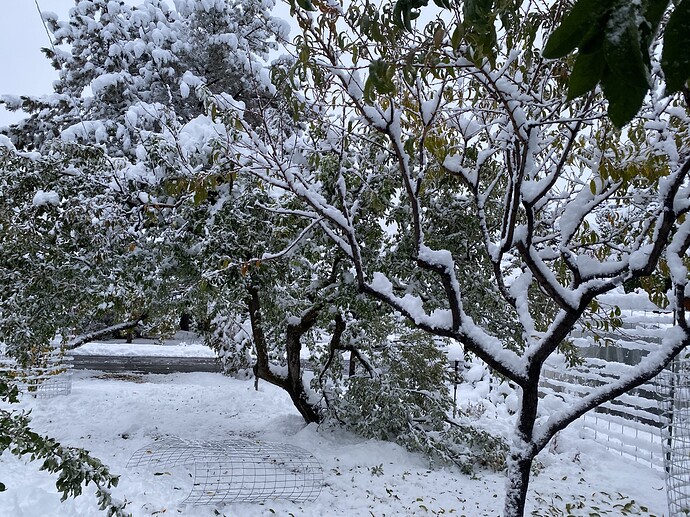 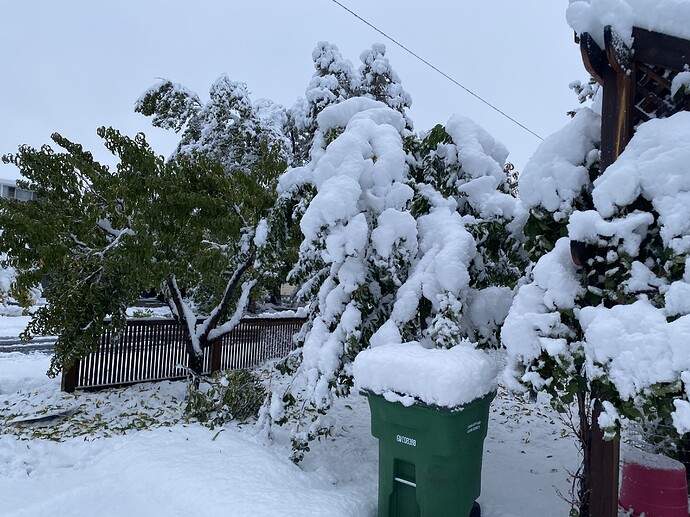 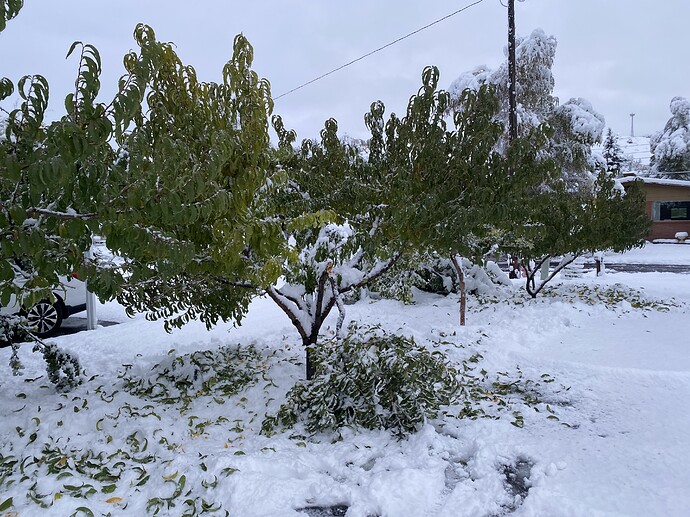 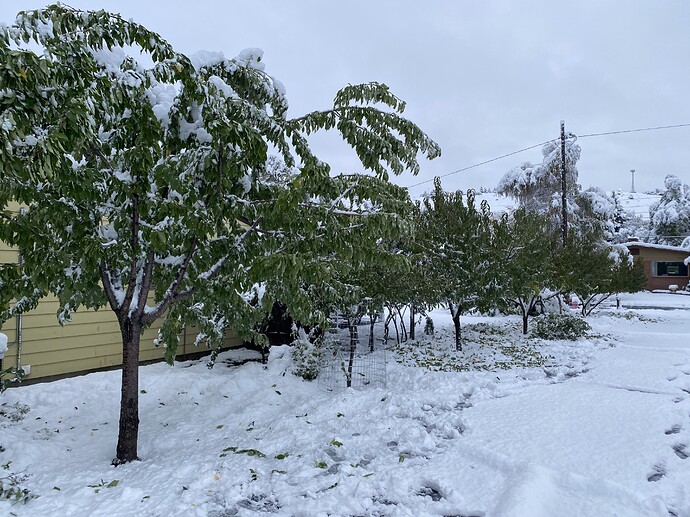 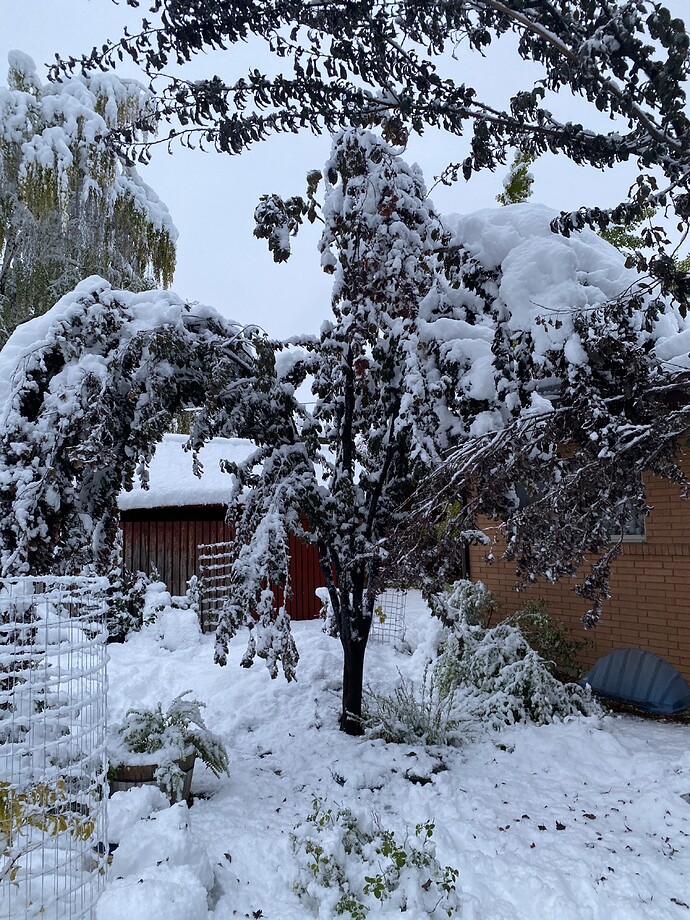 Snow already! Is it normal in your area?

Not for two months!

ouch! where are you?

we’ve had a few like that in the past. it shows you where your weakest limbs are but still sucks.

I would be curious to know the altitude of your location. Marc

Sad to see and sorry to hear.

4500 ft. We don’t normally see this snow until December. The leaves caught all the snow and weighted everything down.

I lost a few large nectarine branches and a large apple main branch but it could have been worse. The maples and box elders faired worse.

At least power is back on in many neighborhoods.

I lost a 5 years old multi- grafted apple tree when we had a freak snow storm on Halloween Day. Trees were full of leaves weighing down by heavy, wet snow. The apple tree toppled over and branches broke at a wrong angle. Lost the tree and hand to pull all other fruit trees up from leaning over.

In the last 35 years or so we’ve had wet snow storms while trees were still in leaf twice. The first time it sounded like war with so many forest trees being topped. About 5 years ago it happened again but didn’t cause too much damage to my orchard. We certainly lost power for a long time due to large forest trees being snapped by the weight and then falling on power lines.

We are vulnerable right now just because it’s been so warm that leaves are still strongly attached to trees and fully green. Frosts seem to be arriving later and later as our growing season expands.

Oh, my! So sorry to see the damage…

I sure hope all your trees will be ok next spring. Just mentioning that as in my area we had a warm Fall a few years ago then got snow for Halloween. The following spring LOTS of plants had cold damage in the nursery I work at. We concluded the trees were not nearly dormant enough nor reached peak of cold hardiness before the cold and snow came in that event.

I hope your fruit trees come thru ok. Sad to see.

So sorry that is a very chilly, sad sight.

@Spartan It didn’t get too cold - barely below freezing but will be maybe 27 F two of the next three night but then it will warm up again a bit. I’ll cross my fingers.

Same here in northern Utah. One tree fell over and broken branches everywhere. The worst was plums. Kentucky coffee and birch trees.

Here in Southeastern CT the frost is late, we’re enjoying Indian Summer instead, but we got some frosts very early last year. Last year the frosts killed off my tomatoes sometime in the first or second week of September, which is not unheard of but a very early time to get frosts. I think last year was the year we had a good half inch to an inch of snow in mid-May.

Just read that LaNina has formed in the Pacific.

Cooler and wetter winter in the Northeast, dryer and warmer in the south.

Look inside the article for your atea.

These results are not guaranteed as there are other factors at play too, just that these are more likely 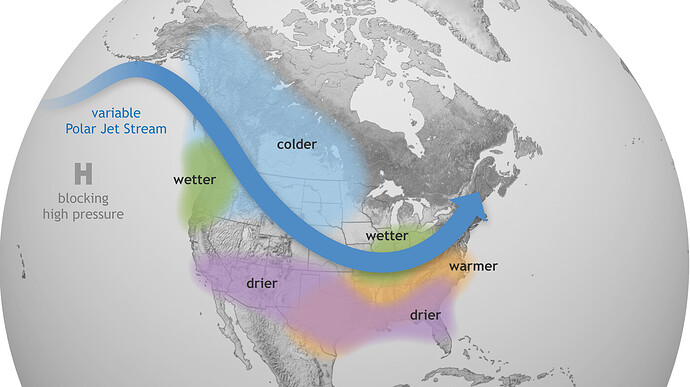 La Niña is coming. Here's what that means for winter weather in the U.S.

The climate pattern known as La Niña generally brings winters that are drier and warmer than usual across the southern U.S. and cooler and wetter in the northern part of the country.