Long story short, I finally got my kiwi garden set up properly after three years, and found out yesterday my largest male is a female when it burst into bloom. This is actually very good, as it’s a variety I wanted, and it’s sitting next to a companion male that’s also full of flowers. So this will be the first time in three years I can get some fruit. However, I feel the spacing and placement is all wrong now. I spent about an hour out in a rainstorm tonight but I just couldn’t bring myself to damage the roots and dig them all up and move them all around without confirmation Im doing the right thing.

The growing season is really kicking into gear and it’s going to be hot and dry this week. Will moving them now cause very serious damage, and I should wait until next winter? Or is it needless worry and despite starting to bloom they’ll bounce back very well this year?

Here’s a video of the area:

Here’s a couple of drawings I made to show the current layout (top), and the planed layout (bottom) if I move them. In the planned layout, all of the vines will be at least 8 feet apart, and the three females will have a large potential root and canopy area in the middle, in a straight line.

This is the best area on the property, and while the top is a little dryer, it’s still all excellent soil and conditions. I gave the sensitive apple kiwi the wetter spot as I thought it was the best. I was hoping to stay away from the edges of the property, in case a neighbors weedeater accidentally hits the trunk. My plan is to keep the two males very small and cut them back immediately after the flowering is finished. Let the females get as large as they can on some kind of trellis system. Only the Apple yellow female is new this year, all the others are two or three years old. 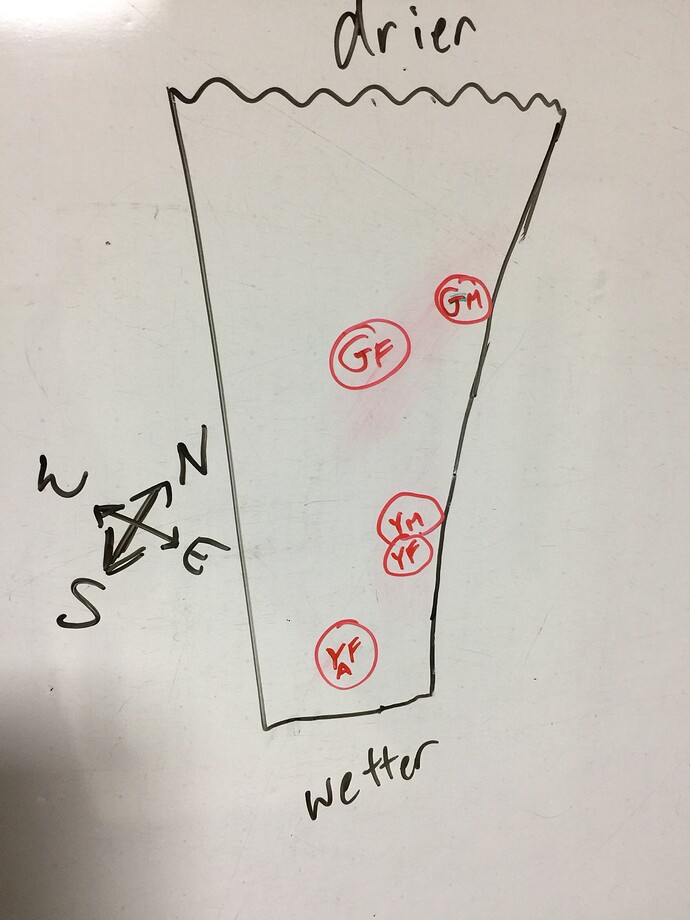 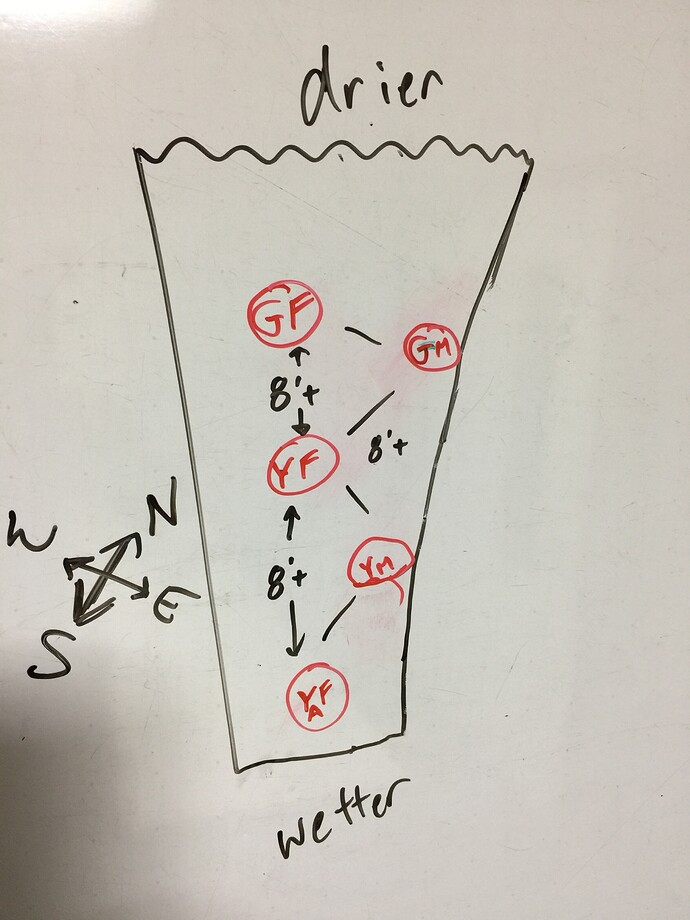 I won’t move a kiwi now with your first crop looming. Kiwi are sensitive to water stress. Wait until next dormant season. Things never seem perfect. Whatever you have can’t be that bad. Wait until the move has a chance.

What he said. I’d wait.
And besides, a better idea often comes during the wait.

OK, thanks a lot Fruitnut, and Ann. That sounds a lot nicer, and hopefully we can get some fruit this year too. Then next winter I can move the two females to better locations. My largest vine, the yellow female, is planted right next to a large yellow male, and they are already starting to get intertwined. I guess I’ll just have to hack the roots and limbs a part at that point, and I imagine they’ll be very intertwined after a year of growing. But it sounds like it’s not that big of a deal if I do it during the dormant season. I’ve been transplanting these vines every single year I’ve had them! It’ll be nice to get them settled.
I’ll just give them all temporary trellises to get them off the ground until next year when I have them lined up properly and I can build a nicer one.
Can you confirm that my ID is correct in saying that’s a female flower in the video?