I don’t want you to think that I am losing faith in the “pinch” as you have last season. So by all means continue doing it. That is how I got my apples to spur up .

I was just suggesting a limited experiment on a small portion of a scaffold.

This year, in my orchard, I will try the " break and hang" to see if that cuts down on the tree constantly creating new shoots from the neat pruning cut site that I have to keep pruning completely off.

One of the points made by the you tube poster was that " break and hang" sapped some of the tree’s vigor ( in keeping the broken shoot alive) leading to fruit spur development below the cut. I will check to see if it also keeps brand new shoots from forming at the pruning site. Just trying to save some work.

I’ve resumed the pinching activities almost every other day for these espaliers. And I’ll try a few “break and hang” to see if there’s any different this time around. Maybe my trees were too young couple years ago?

I valued your advices and still do. And I have faith that I’ll see more positive result by next spring.

Meanwhile, I’ll keep up with pinching and updates…

This past weekend I made it up to the orchard after being away for two weeks.

One theory for letting the broken branch hang was to sap the the energy of the tree in trying to feed the hanger. What I had found in the past that if I prune with a clean cut, the tree starts sending up new vertical growth from the neat cut. Hopefully, with the hanger-on there will be less new shoot growth to replace the hanging shoot.

This is an especially interesting test this year. As you can imagine, with my stone trees having ZERO fruit to energize, they had explosive growth. What I did was to “break and hang” all shoot growth on the right side espalier arms and pruning off with nice clean cuts on the left side. I will have a literal “side by side” comparison study to report on later in the year; first to see if it inhibited the growth and second if it led to more spur development.

The first dozen “crunchie snapping” sounds were very difficult to bear. But then I “evolved” my thinking, adjusted and stopped worrying about the plant abuse police.

I reasoned that my trees did not fruit this year was that I may had over-pinched at too early stage from last year. I pinched whenever the branches were just popping out, tendered and had not gather enough maturity in its system to produce fruit woods. All green tips (inches growths) were pinched at almost every few days until mid/late August last year.

I’ve reflected upon last year’s pinching and come up with a new strategy. This year, I’m going to treat pinching differently. I’m allowing all branch growths to about 12" before zooming in with a pruner. I’ll prune off most top growths, leaving behind only 2-3 inches or 3-4 leaves at the base.

Just think about it…

If pinching becomes an Olympic sport, you are way ahead of the curve.

REPORT ON “BREAK and HANG” EXPERIMENT.

Earlier this season I tried to break upright shoots and to leave them partially attached in order to (1) reduce vigor (2) to see if breaking and leaving the shoot attached would reduce the number of new watershoots as occurred when I pruned with a clean pruner cut and (3) to see if this would encourage formation of fruit spurs on the remaining stub.

First many of the shoots I broke just wilted and died completely. Gave me a heck of a scare when I checked a week later and these “hangers” turned black and looked like I had fireblight throughout the orchard. Luckily it was only the hangers drying and turning black, Phewww!!!

Maybe I broke them when the shoots were too young…

Second, new upright shoots started to grow out of the break no differently than from those that were cleanly pruned off.

It is too early to tell if I will get more fruiting spurs from and below the breaks that from the cuts.

Just as a reminder my trees are espaliers. But many here are bending (weeping) their trees to get early fruting and that makes it somewhat similar to espalier in the creation of many watershoots.

I snapped a few but they all withered faster than I expected. Below is the picture update of my espaliers. Bushier and more thicker stems about 3 weeks after the first hair cut. Looking like they need the 2nd round of pruning. I’ll get to them next week or two (or three)…

Like I mentioned earlier, I’m going to let them grow a bit more for woodier stems before the 2nd round.

I hope it works… 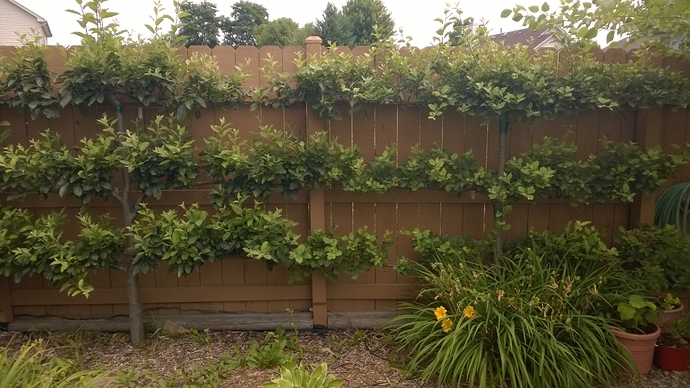 Those trees are eye candy. What a joy it must be to view them in your own backyard.

If they just started to bear apples next year, I would have ateble candies, not just eye candy…

They are absolutely beautiful, something for me to aspire to. 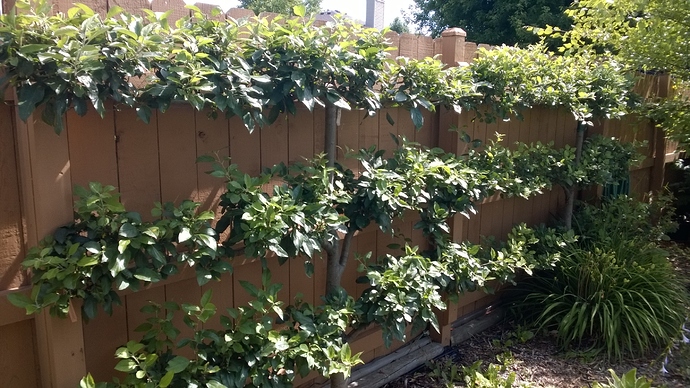 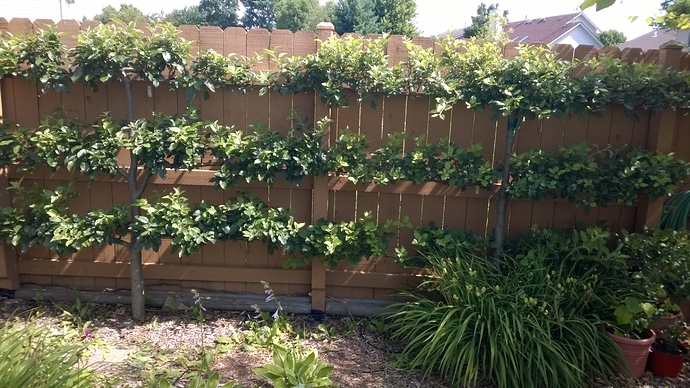 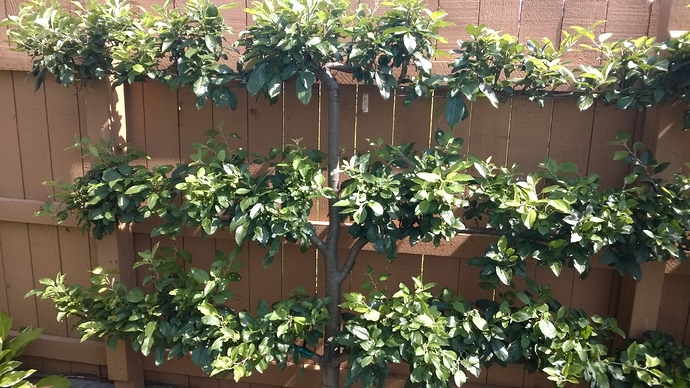 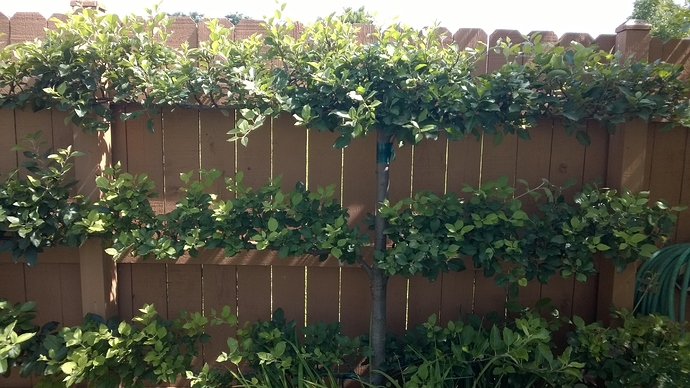 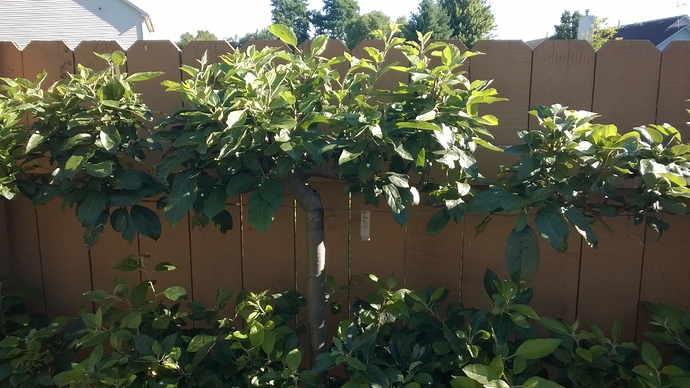 The picture below shows the top branch is already terminated all by itself and the bottom branch is still growing with tender green leaves, subjected to be pruned off… 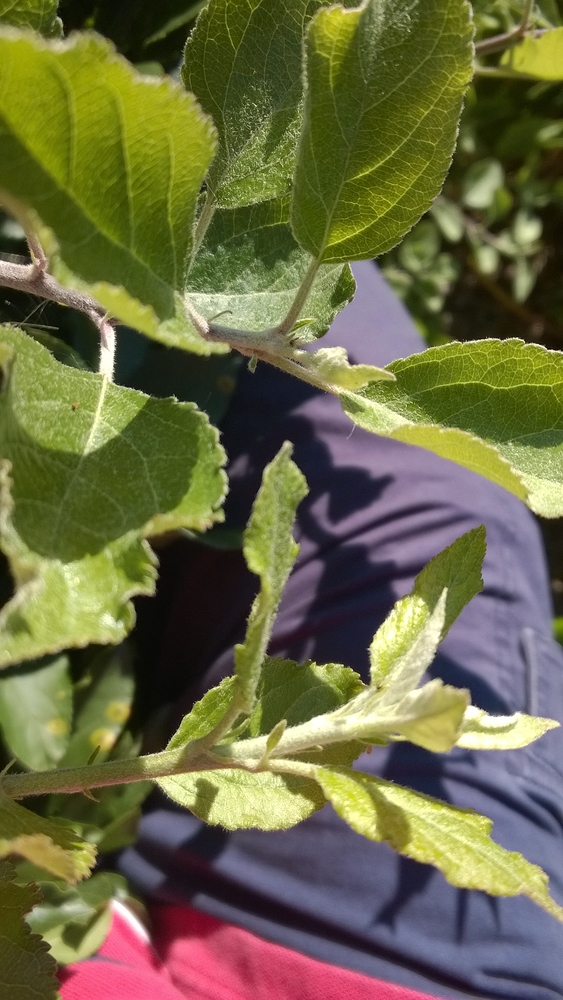 Think back to just about 12 months ago… remember the stress of that FIRST CUT.

Without you guys’ expertise guidance, I would be still spinning around this issue and probably gave up.

Still am learning by the day…

Just remember, every day that you learn something new is a GOOD DAY!

Not much to report on my espalier’s apple bearing project! I’ve just made the 3rd major pruning this season. I think I see lots of short, stubby fruit spurs from both trees. Hopefully they turn to flower clusters for me comes next spring, provided that this winter is somewhat normal, not as extreme as one in 2014 Polar Vortex…

Before the hair cut… 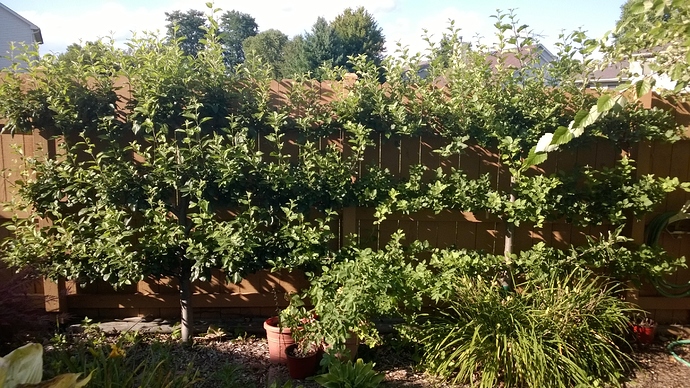 And after… There’re a few whippy stems scattered but those are the newer variety grafts that I did early this year. I saved them to use for further grafting in 2017 on these same trees… 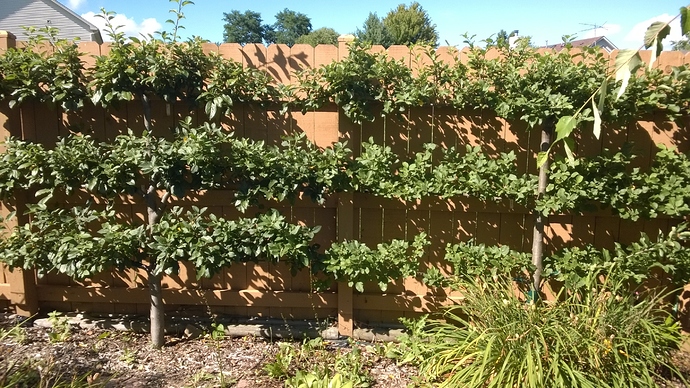 @tomIL how are you looking this year?

& what varieities are you supporting?

Some green tips displayed on both trees. It seems that the top rungs has greened up more than the bottom rungs. At of today, I still can’t make out whether they’re leaves only or leaves with flower clusters yet. Maybe another week before I can confirm if anything is good.

I’ll update on a newer thread (2017 Updates) once everything are more defined.

Might I suggest that you keep any updates on __this __ thread. This single threat shows the history and development of your trees including photos from you and others that go back to the beginning of last year.

This thread with all the inputs and photos from you and others is already a TUTORIAL with a “time lapse” photographic record.

I would go so far as to ask you to go back to your FIRST message on this thread and to “edit” it and add (and label) some of the 2015 photos to your first post on this thread. That will add and keep the record complete.

This thread is already a very good illustrated source of info on how flexible, resilient, interesting and “UN-MYSTERIOUS” ( remember your stress/panic) espaliers can be .