Exciting crab find... what exactly am I looking at?

I came across four crab trees, clearly seedlings. They all have a great combination of juice level, sugar, acidity, and astringency… perfect for blending into my ciders, but absolutely not something the average person would want to gnosh on.

At first, I thought they were cherries, but with the pips etc… definitely crabs, as near as I can tell.

What I’m wondering most about is the feasibility of grafting these onto either g890 or m111. If wild crabs don’t tend to take on those, suggestions for other cold hardy, free standing rootstock would be great. 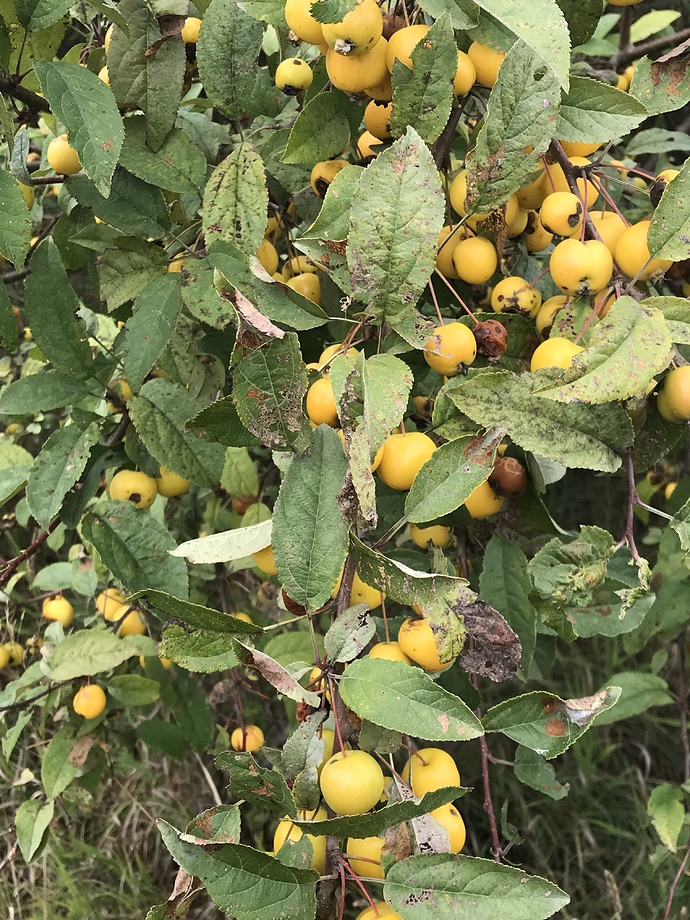 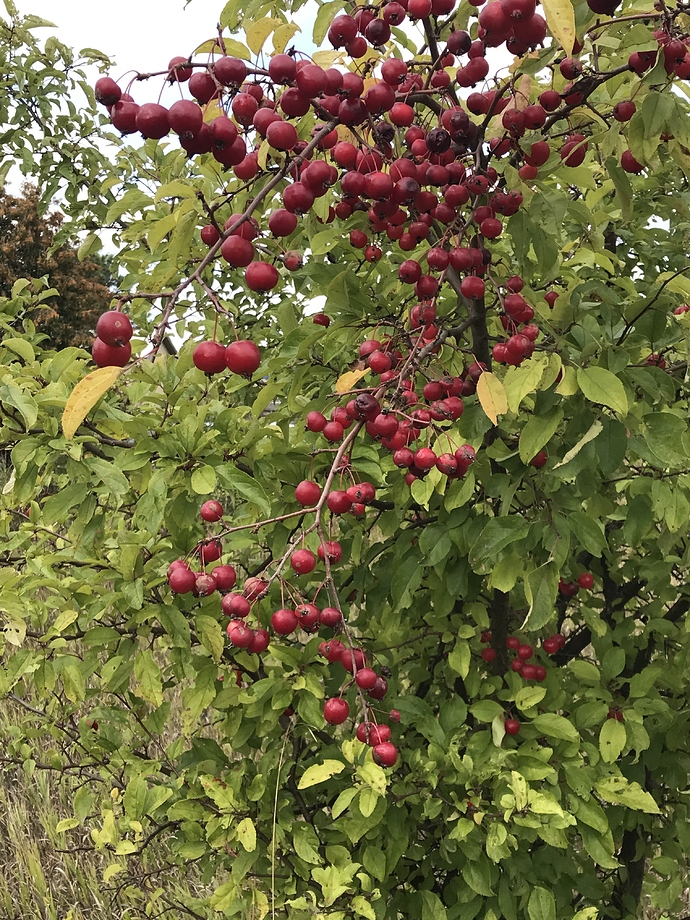 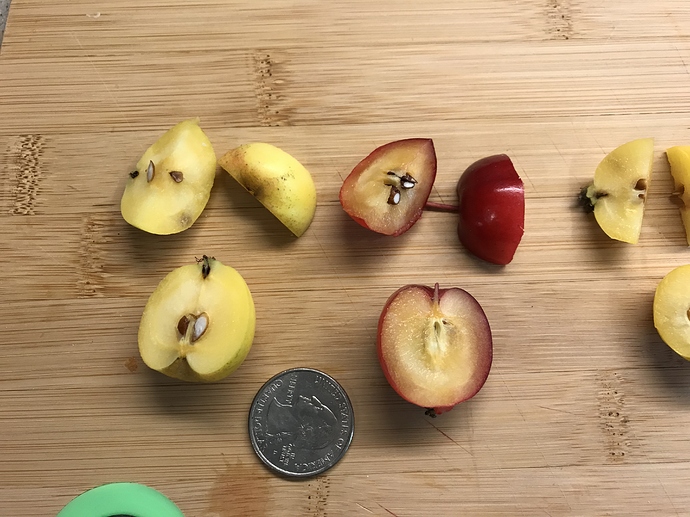 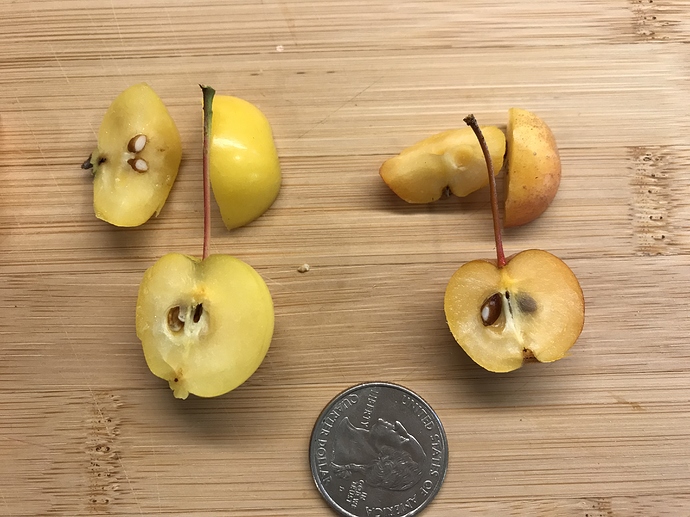 I would expect they would graft just fine, but you might want to do one on each of the two different rootstocks to increase your chances if there is a compatibility issue down the road. A few of my crabs have developed some very ugly swollen graft unions over time, but that could easily be the grafter…

By the way, that yellow one reminds me of Golden Hornet crab apple. Where did you find the trees, on an old homestead or farm or just growing wild in the woods? 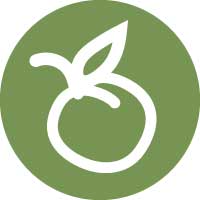 Malus Fusca would be one of my first thoughts, but I’m pretty sure you could find an interstem to get it onto a rootstock you’d otherwise use.

What’s the vigor of the seedlings?

suggestions for other cold hardy, free standing rootstock would be great.

These are on the edge of a field on a centennial farm that’s been fallow for some time. Guessing it used to be a hay field, maybe corn? There are no other trees near this, but there is a small abandoned orchard a few hundred yards away. I spoke with the neighbor by phone… they have a stand of seedling crabs on the back of their property that they said I could harvest.

As for vigor… a pic of a tree (set of trees) below. I’m not sure whether these are not so vigorous of just young. I do know some scion is destined to land on some rootstock here, this spring.

The bright yellow one is by har the sweetest and juiciest. If it weren’t for the desert drying astringency, it would make a nice eater. 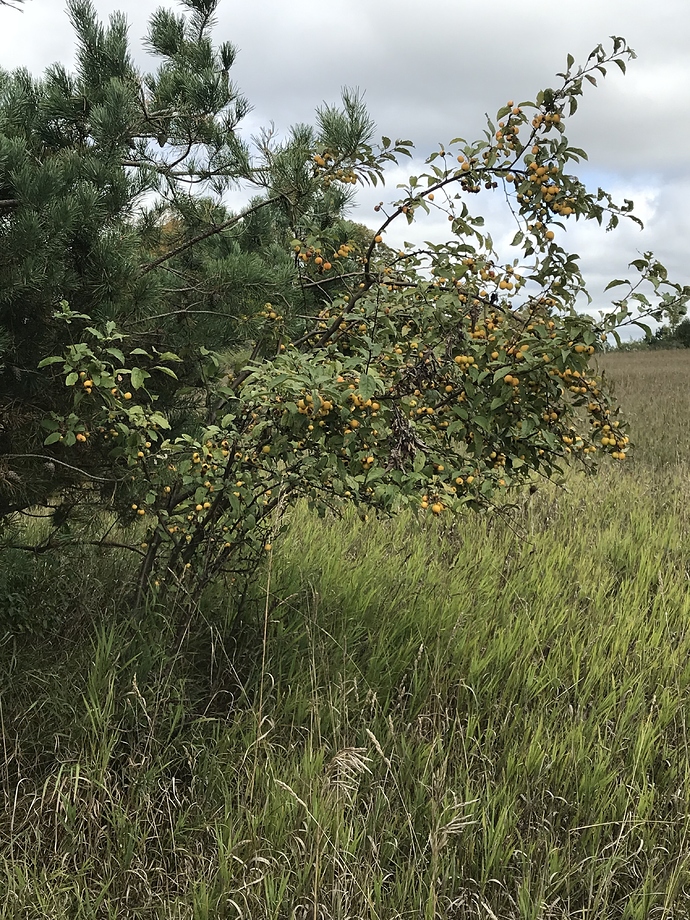 That’s a pretty compact tree. If it’s feral and doesn’t appear to have issues with cold hardiness or pests/disease, I’d make a few cuttings and try to root them. Worst-case scenario is it doesn’t work.

I’ve never heard of rooting apple cuttings before. Do you have a suggested source for info on best practices? Clearly, there’s nothing to lose in trying!

Comparing the golden hornet… those seem quite a bit bigger than what I’ve found.

Same way you root anything, same as propagating rootstock. You could strike cuttings and use some IBA on it, you could air layer a small branch. You could just shove all the twigs into the ground after you prune and see if any take.

English ivy, boxwoods, arborvitae, even azaleas I’ve had pretty good luck. Some things, such as forsythia shrubs, you can just stick prunings in the ground and most live.

With rootstocks being readily available for grafting…growing cuttings from apples is not something you hear much about. But if anyone is having success doing it, I’d be interested in hearing about it.

I haven’t had much success either, but it can’t hurt to try, that tree is just sitting out in a field. I’m sure you could find a compatible rootstock, but it might take a few tries and a few years to know for sure.

So… we’re I to purchase some rootstock, which varieties have shown the most promise when ‘domesticating’ wild crab?

I have M111 and G890 in need of regranting already. I’ll probably get a few bud/antonovka. I’ve never seen renetca or dolgo rootstock.

…and yeah, I’ll likely try some direct rooting too. I don’t want to wait on this. Last year, I produced my best batch of cider ever from some urban-foraged apples. This summer, the trees were removed to expand a parking lot. This field could easily be returned to production. I’d hate to lose a chance at getting something special!

Brian, Maybe you could dig around the tree and see if you can come up with a root cutting with root hairs, maybe a sucker from the tree with some roots that you can pull off and plant. Probably have better luck than with trying to root a hardwood cutting (though it certainly doesn’t hurt to try). Don’t know many who have had success with that. You might also find a sucker or seedling around the tree to dig up to graft to. Should be a good match. How fun to find a wilding you really like! Sue

Renetka is a Siberian crabapple. Hardiest known…or at least used to be.
Unless you live in Siberia, probably not ‘best choice’ for a rootstock.
(It was available from several mail order nurseries 40 or 50 years ago. Haven’t seen it for sale in awhile.)

And now for something completely different …!
From the title of this thread , I just can’t help but tell this story…
I worked for awhile running waterline to people’s houses.
We would lay the line and put a meter tub in the yard, a barrel below ground with a metal lid.
A month or so later an other guy would come along and put the meter in that tub.
My favorite place to eat at the time was crab legs at the china buffet.
I would save a few claws and big long legs, throw them in those meter tubs at work the next day.
That guy that came along a month later was sure there was a giant crab that lived there

This was in West Virginia so no where near the coast.
I don’t think he ever figured it out. He talked about the big crabs though.