The problem I could see in regard to the PAF is that the primocane crop starts as the new canes emerge and continues until the weather gets too cold. As a cane grows it will bloom and fruit. I still have some blooming. There is no “crop time” per se. I get a few berries here and there. If you have a mass planting of canes then that would increase but I would think it would still be spread out over months and not necessarily a second Blackberry season. With lots of canes that might work but I don’t think you will have them en mass over a short period of time. Tipping the canes delay the fruiting so if you were diligent with that you might bring more of them in together.

I might be able to remove small fruit and any blooms past a date beyond when they can ripen. The small fruit would be a pain to remove but I could spray carbyl to remove the late blooms http://www.mortonarb.org/trees-plants/tree-and-plant-advice/horticulture-care/preventing-or-reducing-fruit-ornamental-trees. That would allow the berries to store more energy for the plant itself.

I’m not looking forward to those 45 thorns. It will take a year or two to figure how the plants are going to behave here. I will keep good records and post them. Glad the 101 are in the ground. Half the plants were on the small side in comparison with what I got from nourse last year and the others were comparable. There is a lot good to be said about small plants too namely that they are easier to plant. This presentation is excellent about the different berries from the University of Arkansas. Blackberry Cultivars, McWhirt Nov_15,2016.pdf (4.0 MB)

Researching additional berry plants from https://indianaberry.com/products/1/7/Plants/Blackberries. The ones below are a few I’m investigating.

Natchez Thornless NEW! Natchez ripens early, about the same time as Arapaho, but with higher yields. Fruit size is comparable to Apache, approx. 8-9 grams. Sugar content averages 9.5%. Canes are semi-erect so would benefit from trellising. Natchez has not been tested in areas with reduced chilling, such as Florida. No substantial common diseases observed.
U.S. Plant Patent#PP,20,891-Propagation prohibited by law.
Best In Zones 5 - 9

Ouachita- (Patent Pending) This blackberry is a recent release from the University of Arkansas. Ouachita, pronounced WAH-shi-tah, is a very upright growing, vigorous, thornless blackberry. Plants can be self supporting when primocanes are tipped at 45 inches. However, trellising may be needed to keep a full crop from leaning out of the row. Fruit quality is excellent. Berries are firm, sweet and larger than Navaho and Arapaho, but smaller than Apache, averaging 6 grams each. Fruit matures about 7 days after Arapaho and 7 days before Navaho starting in early June in Arkansas and mid July in Michigan. Yields are high, sometimes exceeding those of Apache and Navaho in most tests, and Arapaho consistently. Although it is too early to know for sure, winter hardiness appears similar to Apache and hardier than Arapaho, but slightly less than Navaho. Ouachita appears to be resistant to double blossom and no orange rust infections have been observed in any of the trials.
U.S. Plant Patent#PP17,162-Propagation prohibited by law.
Best In Zones 6 - 9

Triple Crown-These large, sweet, aromatic blackberries may run away from the competition once they begin appearing in supermarkets around the country. Triple Crown is the newest thornless blackberry from the Agricultural Research Service’s Fruit Laboratory in Beltsville, MD. The berry is named for its three crowning attributes - flavor, productivity and vigor. Triple Crown ripens from about July 10 to August 10. The plants yield large, glossy black fruits that are pleasantly firm and able to withstand the rigors of shipping. Attractive and flavorful, it ripens later than the popular “Hull Thornless” blackberry and a week or so earlier than another widely planted berry, “Chester Thornless.” Triple Crown berries are larger than both of these other commercially grown varieties, and should help ensure that berry farmers, owners of pick-your-own operations and backyard gardeners have a constant supply of big, flavorful thornless blackberries throughout the ripening season. Plants can be trellised or grown upright and pruned to a height of about 42".
Best In Zones 5 - 9

Shawnee- (Plant Patent #5686)–Shawnee has produced as much as 13,000 pounds per acre in Arkansas fruit sub-station tests. It does not appear to have a peak during the harvest season–producing heavily for several consecutive weeks. Shawnee extends the marketing season for blackberries for local marketers. It is sweet and juicy!

How do your heirloom blackberries handle the cold weather?

There is never die back. The Heirlooms bloom after all threat of frost has passed.

I’m hoping the roots are alive on the large planting of Pense prime ark 45 plants I did late this fall because what I saw of the stems looked dead. The smaller test crop I did late last spring last year look better from nourse. More pictures will follow later when I compare the plants from the 2 companies. If the pense berries don’t come up that will at a minimum tell us the berries should not be fall planted. Winter was -9 or colder so we will see the cold hardiness of freedom and the 45’s from nourse. What I’m seeing so far indicates nourse plants are good. Time will tell on the pense berries.

I am trying to understand the pruning of Chester. Mine overwintered very well in the greenhouse, I have two thick strong canes( with laterals) that are now sending out green shoots. I look at your upright Chester and wonder, are those big upright canes the ones you would remove after they fruit? Or do you only remove the growth that comes off of those uprights after they fruit?

The whole canes right to the ground. Only canes that started the same year remain. Second year canes are removed at ground level. . I removed the plant, I was getting too many blackberries. A gooseberry (Jewel) is going there. Once the crown becomes bigger it produces bigger canes. Chester was pretty cool but I want other fruits. I kept Darrow, New Berry, Boysen, Wyeberry, Siskiyou, Tayberry, and Marion.

i layed down my darrow w/ my PAF to protect them . hopefully i get fruit this year.

Mine were laid down as well, I put loose bags of saw dust on top of the vines for insulation. My greenhouse is not heated in the winter so it got pretty cold in there. We started the heater a couple of weeks ago so that is why they are now sending out shoots.

wish i had a heated greenhouse. we get so much snow it would be hard to keep a greenhouse from collapsing before you can remove the snow. 2ft. in 1 storm happens at least a few times a season. do you have a homemade greenhouse or fabricated one?

Mine is an Omni Greenhouse. We get lots of snow as well, currently 3 ft still on the ground. I was afraid of snow load as a few greenhouses around here have succumbed. The expert I talked to told me to go to a less wide variety but longer in length, that way the ribs (which are the same diameter for every greenhouse that they make), would have greater strength because the span is less. Mine is only 16 feet wide and currently 20 feet long ( adding more ribs in a few years). It does have two layers of plastic, inflated with a bathroom fan. The snow slides off all winter and never accumulates. It is heated with a wood boiler that circulates water thru an old radiator with a fan mounted behind it.

thats a good sized one. my father had a homemade one a little smaller than that heated with a old oil trailer furnace. lasted for 10 yrs before the wood finally rotted out. was like a jungle walking in there. he would start the beg. of march till’ late nov. even grew watermelons!

My dad build a geodesic dome about 12 feet across and heated it with a small wood stove used for ice fishing huts. I still have his metal dome, I have been contemplating using it somehow to cover some type of small fruit bearing tree.

If you are talking to me, here is a picture of the dome it used to be covered with rigid plastic and had a chimney out the top. I now used it for an outside chicken pen. I don’t have a picture of my greenhouse though. 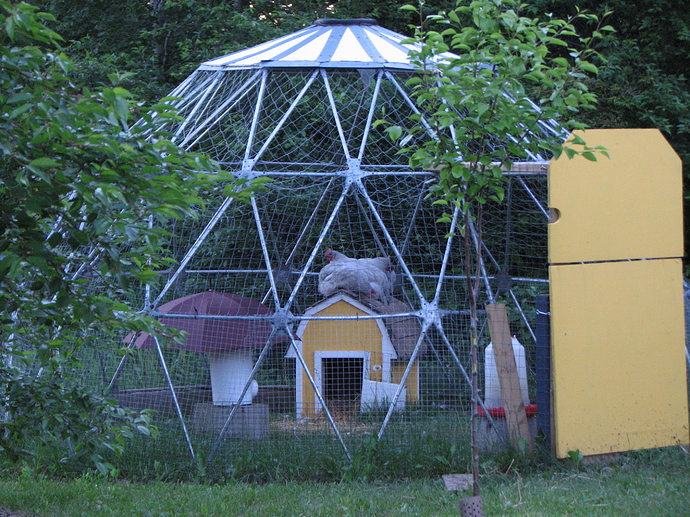 In spite of all my hard work only 10 plants lived out of the 101 from pense. It was not fault of the plants or the nursery but I don’t recommend anyone fall plant them where it can get to -10f but instead wait and spring plant them. We have this problem sometimes. There are years that we get even colder. Everyone was killed to the ground and most didn’t come back up. I will keep you posted on how the remainder do in Kansas.