my baby cake dwarf blackberries are just blooming also. my dewberries are about 2 weeks to their 1st harvest. man do those things throw some canes! had to build a tressel behind the bed to tie them to. some are 15ft long!

Here is a berry from my black magic that I planted this spring. It just keeps blooming. I am hoping it really makes a bunch next year. 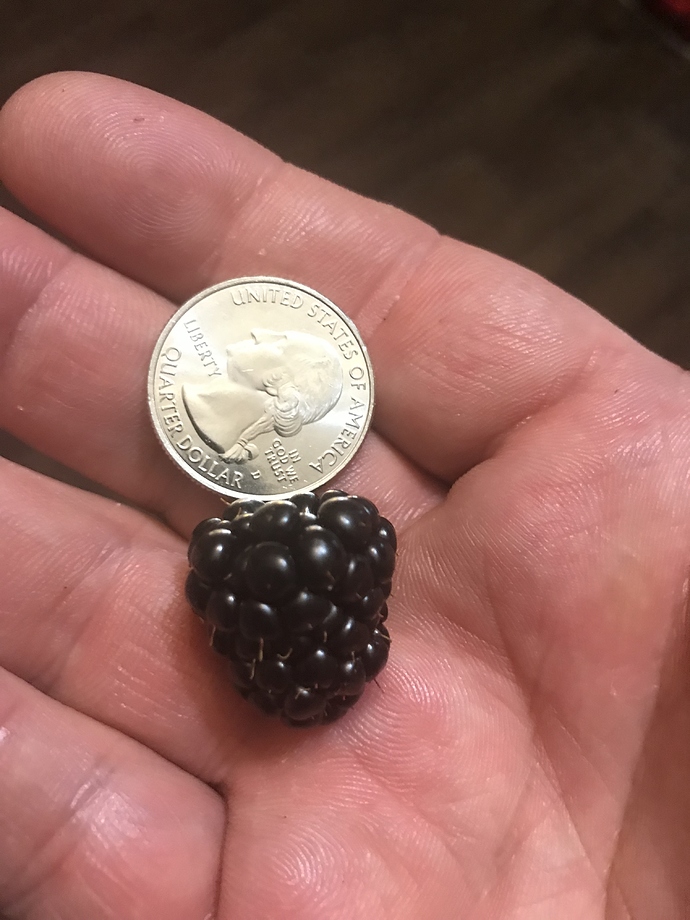 Taking photos of the plants soon they are doing fantastic though still very short! My heirloom berries are much bigger and more aggressive. Sure wish the 45 could be crossed with my others.

my dewberries didn’t produce a lot of berries but they were the size above and had a zingy taste unlike a blackberry. they were very good! my baby cakes had a even bigger berry with a classic blackberry taste. both winners considering they are the 1st. blackberries I’ve been able to grow here. i have 5 nelsons and my wild canadian blackberries that should produce this summer for the 1st time . I’m psyched!

@moose71
That sounds very promising! Let us know how it goes! Worse case scenario bury those cold sensitive blackberries in wood chips like i do my figs sometimes. Its a lot of work but if you really like something its worth it.

i tried that for 2 winters with my PAFs under all our snow. they still froze . the nelsons are supposedly hardy to z4a so should be good to go. baby cakes are also z4 but they’re so short that they are completely covered with snow so they are good to go. if i get cane damage on the nelsons i could lay them down if need be but I’m going to need welders gauntlets as they are wicked thorny! like you said if you like something enough…

I ordered a few Kiowa blackberries to plant this spring. Another thorned variety but a really big berry.

Prime ark 45 are extremely good berries here in Kansas. Ive worked with them a lot now and highly recommend them. Im going to attempt crosses of these with my heirloom berries if its possible.

I have tried PAFs, Nelsons, and Darrows here on the edge of zones 3/4. The PAFs I had to cover with large styrofoam blocks and then layers of a rolled insulation. They produced some berries, but most were the fall berries and they ripened too late. When I no longer covered them over winter, that was the end of those. The Darrows sprout up every spring and have spread, but nary a berry after about 5-6 years. So long to those. The Nelsons I haven’t tried protecting. This year they are covered in green berries! Last year the rabbits or deer had chewed the canes enough over winter that the canes died, so last fall I sprayed repellent on them, which seemed to have done the trick. Over the past years, there had been an occasional berry, which had much better flavor than the PAFs. I might try a Baby Cakes, although Burpees says it isn’t recommended for our zone. I also have a wild one from a garage sale if I can remember where I planted it.

im in z3/4 and my baby cakes have survived and fruited here. got mine i think from jung and they said they were z4 hardy. fruit was way better than the stuff at the store. my nelsons are full of green berries right now. planted as tiny plugs spring of 19’. i should get a decent crop in a month or so. i too tried the P.A.F. same problems. i also have some canadian/ smooth blackberries i found growing in our local park. i planted a row in the yard of them last year. they too are loaded with green berries. these only get the size of a reg.cultivated raspberry but they fruit heavily and are very good. I’m hoping growing them in full sun , in compost the berries might get a little bigger.

With harsher winters, would it make more sense to grow trailing varieties and lay them down to completely cover them once they’re dormant?
I’ll be moving my plants into my basement bulkhead since they’re still in containers. once I put them into beds next year, I plan on making a chicken wire cage around it, I might keep it in place over winter and fill it with leaves to cover the canes.

i do that with my dewberries. i use burlap bags full of leaves or straw. I’ve yet to lose a cane to cold.

Prime ark freedom have been nothing impressive in Kansas. Nothing wrong with freedom just not the best berry for my location. Prime ark 45 are readily adapting now to Kansas. @39thparallel has a larger test crop im curious if his results are similar 30 minutes away in a slightly warmer zone. They are living up to their good reputation and mutiple crops. I ate some today and you can see others are in various stages of fruit development. 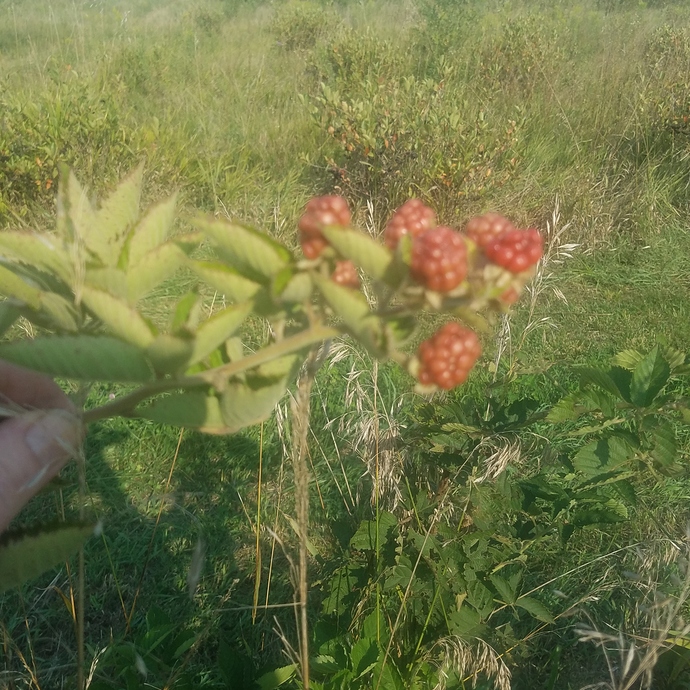 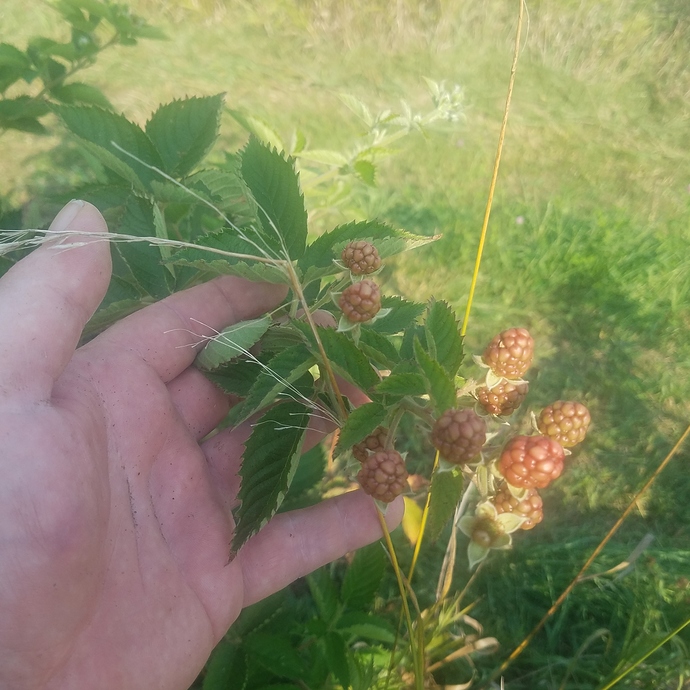 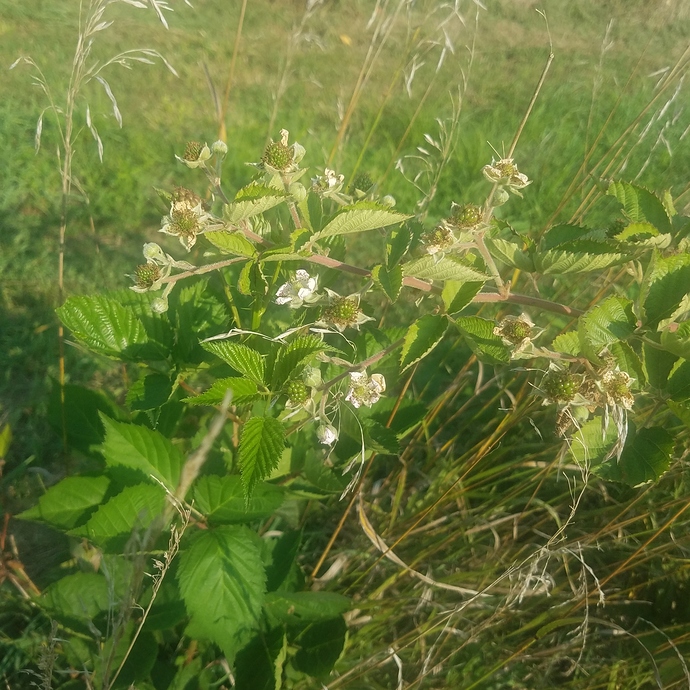 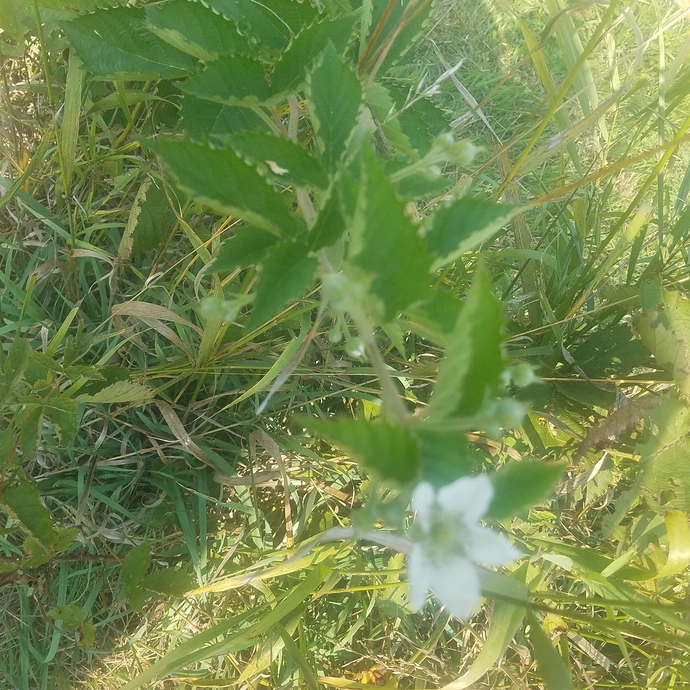 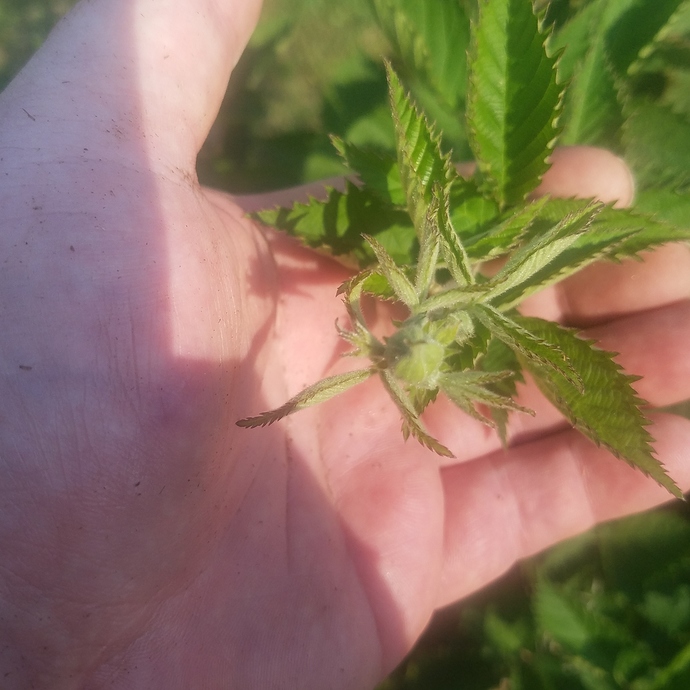 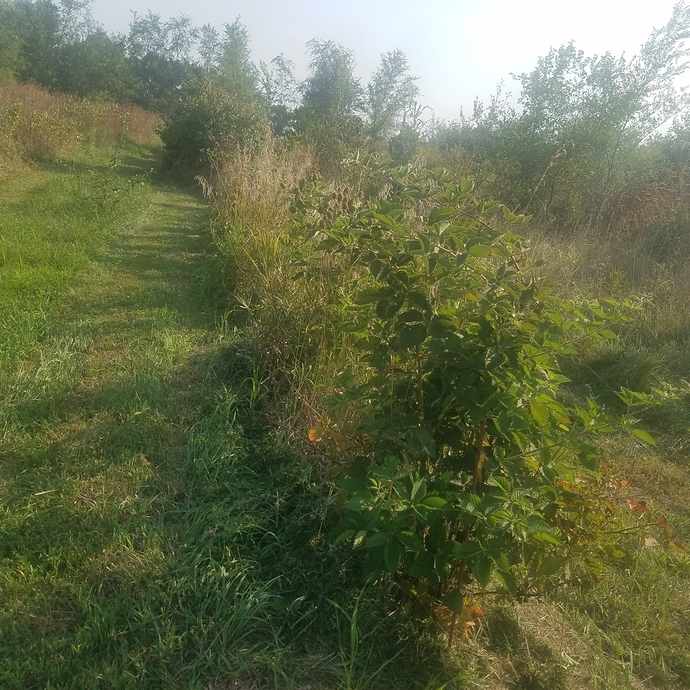 Those look great Clark. My Freedoms are not doing great but, I have not taken the best care of them. The few cains that are mature do produce impressive fruit.

I got the first ripe berry off my dwarf baby cake, just the one mature cane and a couple new ones that are just starting to bud. I may have picked it a bit early… still good and impressive for a small plant. Picture was taken the day before it was picked.

We love prime ark 45’s they are beyond my best expecations. Not often does something exceed what we expected to extend the blackberry season. These pictures were taken September 10th. They show no signs of slowing down. They are still blooming! Prime ark freedom continue to be a dissapointment so far at my location. When people taste these test crop berries 100% of the time they say they are very good but not as good as my family heirloom berries that ripen in July. For extending the blackberry harvest these are exactly what you want. They are hardy but as hardy as the heirlooms. These must be very well cared for the first two years to get them established. My mother came out to look at them and after eating some she proclaimed they were pretty good for a tame berry but nothing like the family heirloom we grow. I mentioned to her that perhaps crosses between the two would improve the genetics on both. She looked at me like i suggested releasing tazmanian devils for a breeding project. If the heirlooms of my grandfathers blackberries pick up the everbearing gene naturally they would be unstoppable because the seeds readily sprout as it is with wide gentic variation. 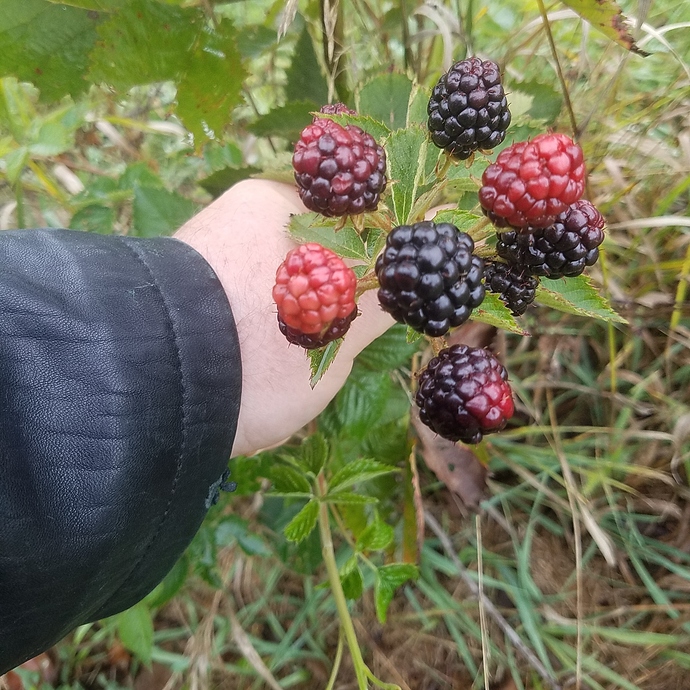 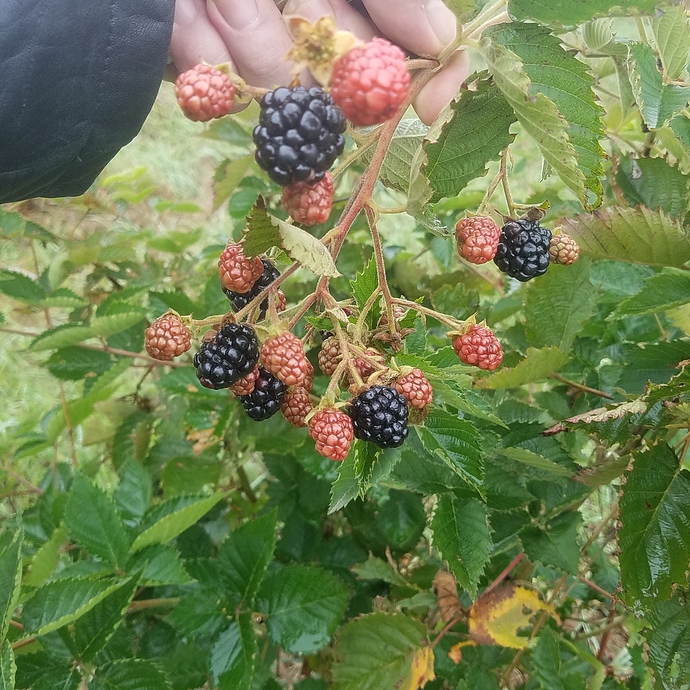 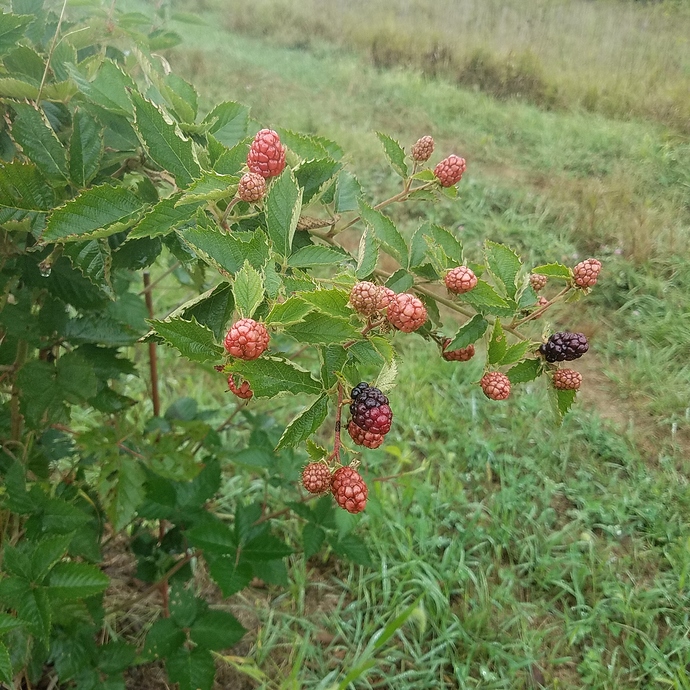 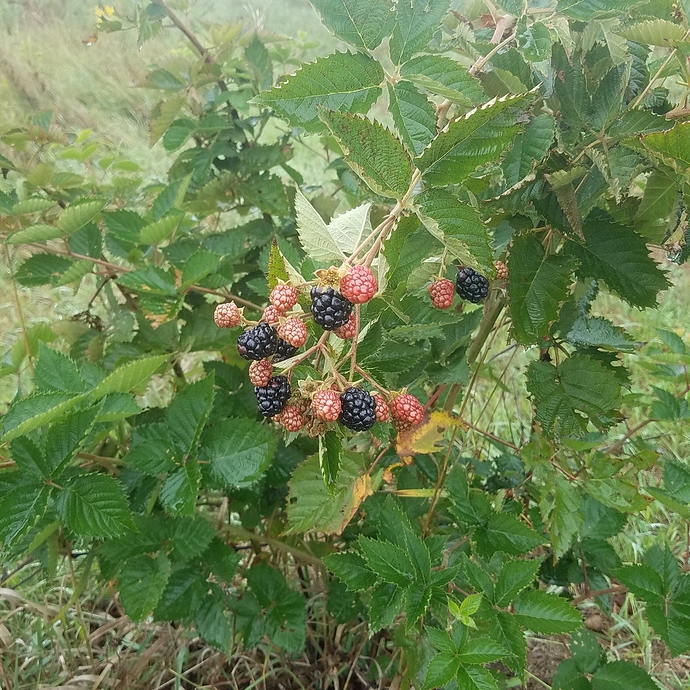 Prime ark 45 September 20th test crop yielding more berries and showing no signs of slowing down. Some berries are smaller but most have a good size.

Clark, those are Freedoms aren’t they. I don’t see any thorns. My freedoms have been producing like crazy 1.5 hours west of you, but my 45s haven’t produced anything.