Favorite Blackberry (with thorns) ? or without

Statistics IMO will fail spectacularly when it comes to genetic analysis. Why so? Because statistics is using math to express relationships within large sets of data. The smaller the data set, the less reliable the statistics. At the species level, the data set is often very small.

Statistics IMO will fail spectacularly when it comes to genetic analysis.

You and I understand that statistics and number theory are two different subjects. But it is not so in the majority of biology departments - especially horticulture where any means of quantitative measure is considered a statistical method. It is an unfortunate over-generalization.

Another over-generalization that occurs in the general public is the lumping of all “genetics” analyses into one category. This is like saying every problem in Physics is geometric. However, determining the frequency of light in a laser beam is very different from the calculating direction it is pointing.

calculating direction it is pointing

@Fusion_power
The point I’m attempting to make about genetic distance and genetic clades is that the mathematics for each are very different from the biophysics analyses needed in genetic pathology.

In particular, someone with a secondary mathematics teaching credential in states like CA, NC, NY has enough mathematics background to solve the problems in either of the first two with an Excel spreadsheet. However, many PhD plant geneticists do not.

As for the puzzles in genetic pathology, I believe this requires persons with the gifts of savant who polish off PhDs in functional biology, chemistry, mathematics, and physics in 4-5 years total.

Thanks to the various members who took the time to discuss methods of blackberry genetics.

Combining the original topic with the genetics discussion, I am now wondering about the etymology of the phrase “thorny issue”. Did it originate with roses or with brambles?

That is a “thorny issue”. 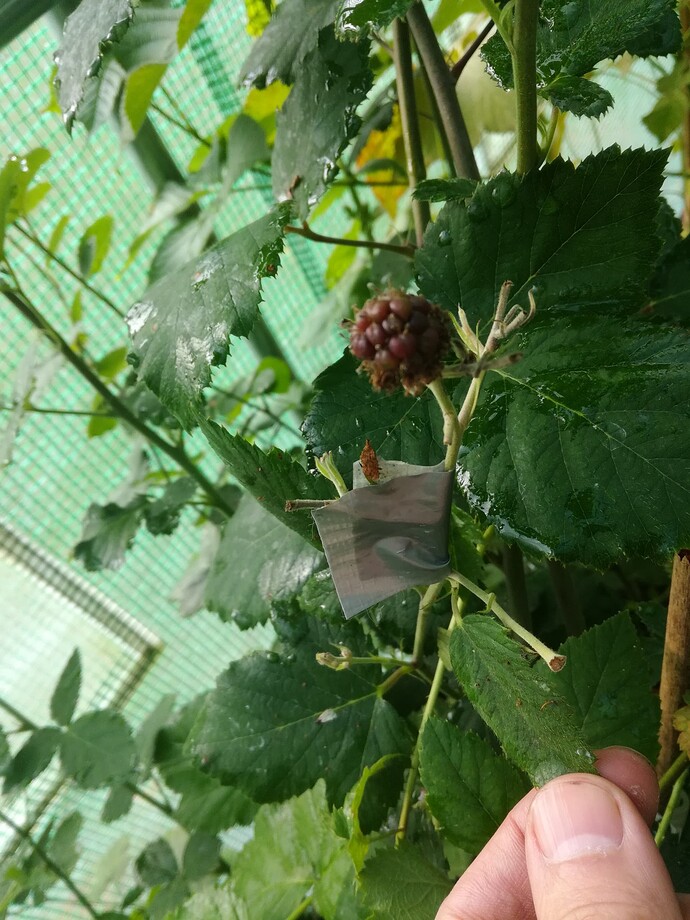 I’ve been trying to get these Black Pearl trailing blackberries to produce in my locale but this is the farthest I’ve been able to get. It was bred as a replacement for Marion. They’re thrornless, slightly hardier, firmer and with a similar taste but only the lowest parts flowered this year and they’re late. I want it to be my favorite blackberry but if they ripen they won’t have a lot of taste this late in the season. Or should I say this late after the season. The marker is there because I hit it with Tayberry pollen for extra hardiness.

The trend of now and the future is to breed the thorns out of blackberries…at the sacrifice of flavor.

Brambles were cultivated pre-1867 by humans to enclose fields and provide natural fences… after the invention of barbed wire they became less desirable.

Thorns on brambles are its natural defense against browsing by deer…even the leaves have thorns… Every part of a bramble is designed to propagate itself. Seed, tip, roots…laterals. There is even a mechanism in the seed so that stomach acid aids in its germination… so that fallen berries do not out compete the mother plant…and the seeds are dispersed by walking or flying creatures far away from itself… which can make it invasive.

There are lots of cultivars that are ‘lost’ due to the thorns. The home gardener or u-pick operation does not want to deal with the trouble of prickles and thorns.

Darrow, Choctaw, Shawnee, Chickasaw, Cherokee, and Cheyenne are all but phased out… only Kiowa remains as far as a ‘desirable’ variety… I have these all going now and hope to keep them going as they have all but disappeared.

I find it interesting that the market abandoned cold climate cultivars… i think the fact that thorny culivars are the hardiest has also caused its decline. Illini Hardy is gone from the market. Ebony Hardy exists but only sold in Canada…could be the same plant im not sure.

Thornless Logan and Boysen are also more desirable for cultivation then their thorny counterparts. There is even a thornless Tayberry…but we may never get it here in the US.

If you think of all the work/labor involved in having a successful fruit tree…with the sprays, the watering, the fertilizing, the pruning, shaping and protection needed to produce a nice crop…

The thorny bramble with its risk of a scratch…has every one of those things covered itself. Human intervention only decreases its crop.

As a hobbyist I don’t really mind the thorns although some of the blackberries can be quite fierce when pruning.

Most breeding programs seems to be aimed for commercial plantings where thorns or prickles can be a bit problematic. These days they only want thornless varieties that are firm enough to be machine harvested because it’s so much more cost effective. It’s all about money and they really don’t want to get sued over berries that could contain thorns.

Yield and size of the fruit come first, followed by disease resistance and ease of picking. If the firmness and shelf life of the fruit are good and the taste is acceptable you might have a new cultivar. Now you have to find those traits among the % of plants that are also thornless.

In other words you might have the best tasting and hardy cultivar but it will never get released unless it ticks all the other boxes as well.

That’s why I’ll rather take my chances at breeding my own stuff instead of waiting for something that will never see the light of day because it’s not profitable enough. There’s relatively little demand for cold climate cultivars and in today’s high tunnel production systems the plants get replaced every year leaving no need for hardiness. For me taste and hardiness are the most important criteria but the market’s demands are very different.

commercial plantings where thorns or prickles can be a bit problematic. These days they only want thornless varieties that are firm enough to be machine harvested because it’s so much more cost effective.

Then there is Driscoll’s 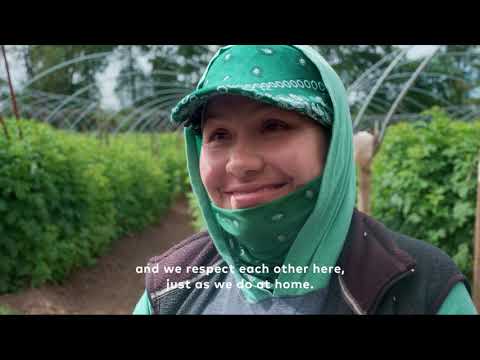 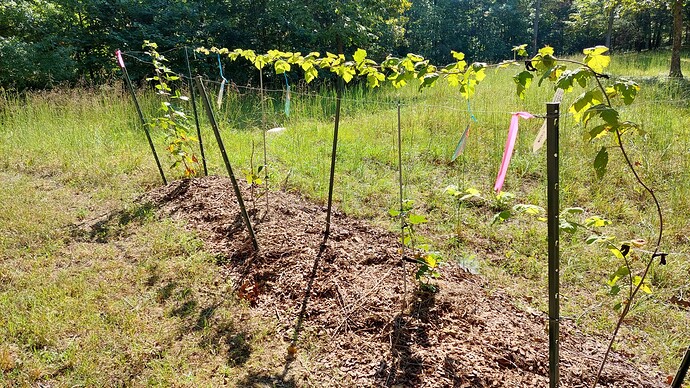 The loganberry in this pic was propigated by tip rooting last fall… and transplanted to this 3.5 hour morning sun location this spring.

I let it push one new primocane… and that new pcane has put on 20+ ft of grrowth now.

I let it fork once and have the main pcane running the top wire of this vtrellis… and the smaller fork running the lower wire.

The PAFs in this bed… have not done much… only one of them has reached the top wire. Perhaps they just need more sun.

Logans can definately thrive with a little morning sun. 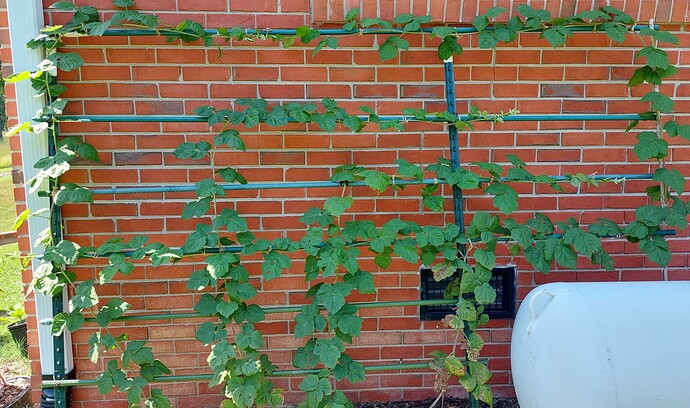 This is a pic today of my original loganberry … I started 2 crowns there… and this year I let each crown keep 2 pcanes (back in early July I cut out all others). Those 4 pcanes are working on covering my rather large frame trellis.

They will cover it and run off the ends. Logans are pretty frost hardy… it will be late November or early December before they stop growing here.