My overwintering storage conditions in my new house are less than ideal. I was excited to see that I had an unheated garage where I could easily move the figs instead of the painstaking process of shifting 50 lb potted figs through the old house to the claustrophobic (but perfect temperature) side room. Unfortunately, I discovered the garage is heated, there is no thermostat, and I cannot turn off the garage radiator without also turning off the heat to part of the house. Sigh. It is staying around 58F now and I am watering the figs more often that I usually would (but still minimally). I thought I had the light blocked fairly well, but one of the figs has started to leaf out/produce brebas. I have since really blocked all the light. 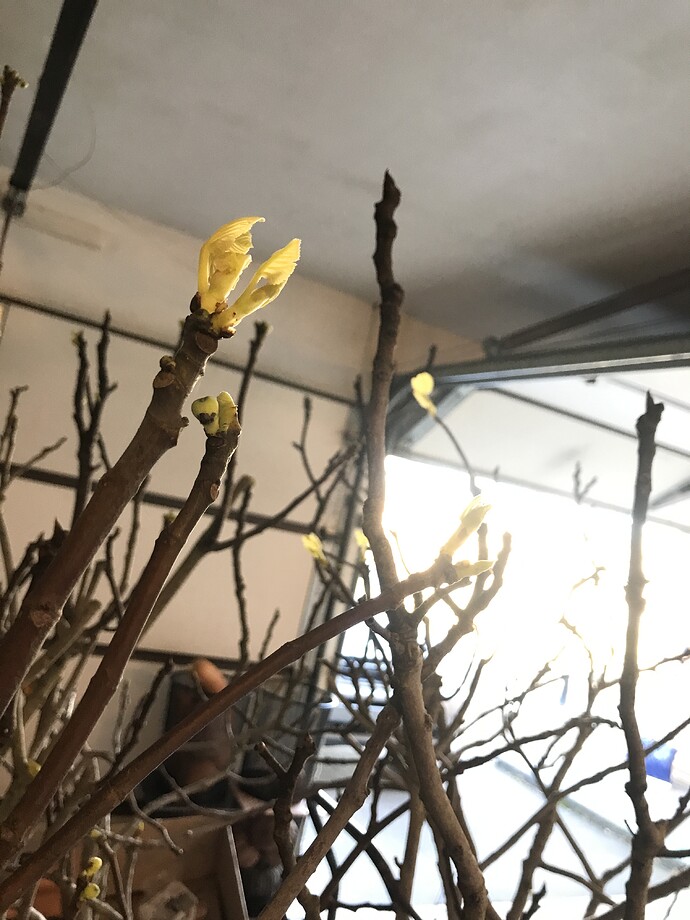 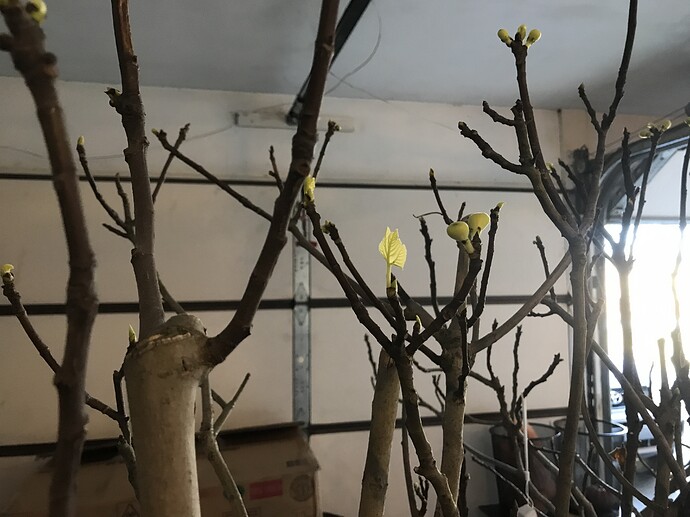 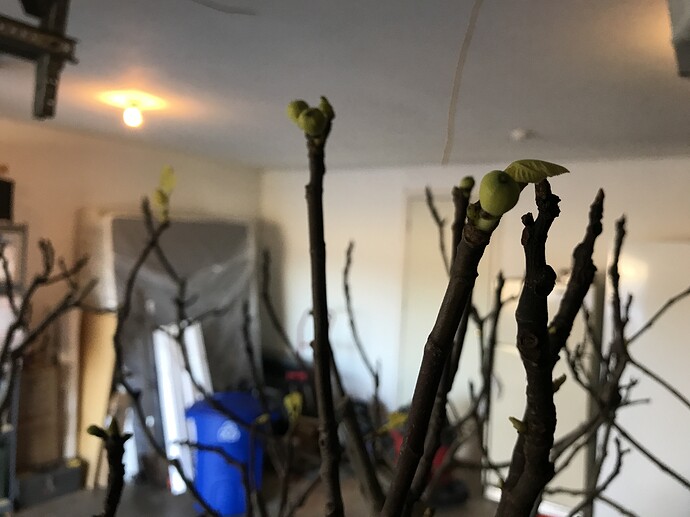 My question is what to do with this fig? It is a true Lattarula Fig and is 11 years old. It is covered in brebas, which is a bit ironic, as I average 1 fig per year from this plant. Every fall I threaten to give it away and every summer that one fig is so good that the plant stays. I also have a sort-of solarium in the new house, although it is rather full of flowing salvias. The solarium has a heater that keeps it above 50F, but on warm, sunny days, it spikes up in heat. If the fig really starts leafing out, should I move it to the solarium? Should I move it now? So far, only this fig and my 2 year old accidental cutting fig plants are showing leaf growth. The other 4 large plants are fairly dormant compared to the Lattarula. Others include 10-11 year old Chicago Fig, Peter’s Honey, Petite Negri, and one I adopted that I think is Brown Turkey. 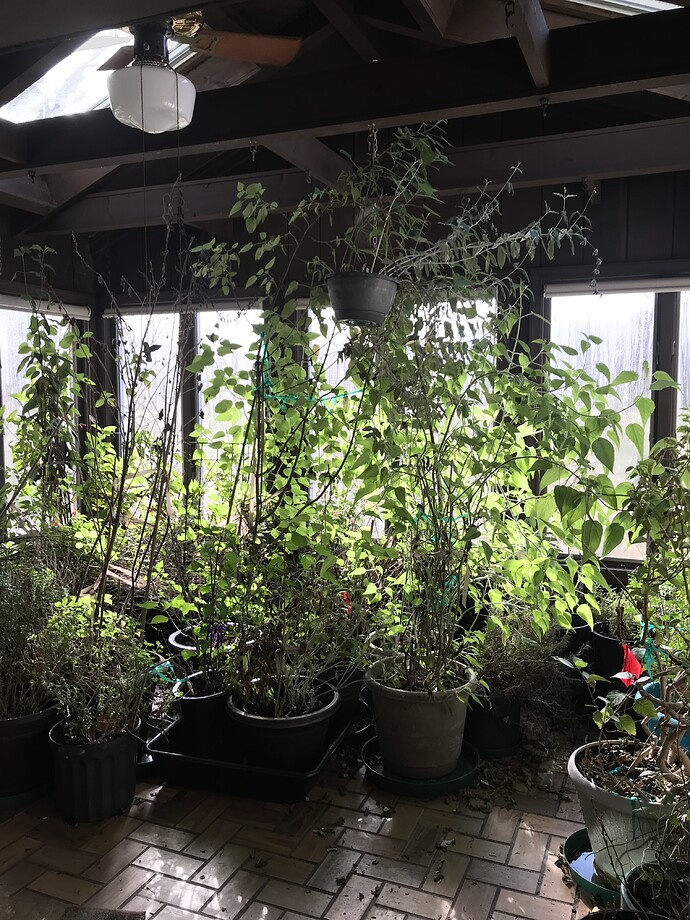 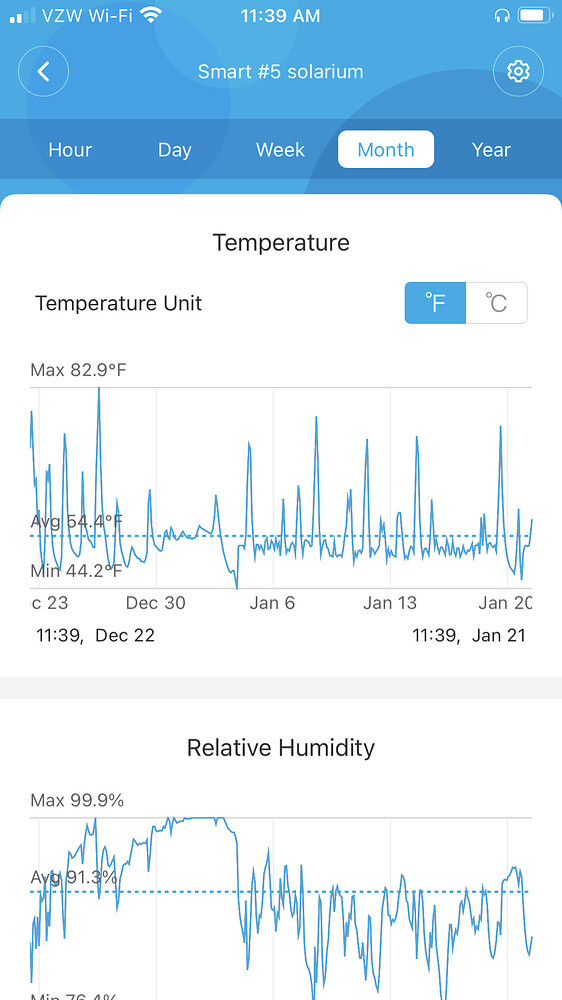 I am interested in what others will reply since I hope to find myself with as many plants as you have in your solarium (and my dwarf atreano also just started breaking dormancy…!)

I love the picture of all your plants in the solarium

If it’s starting to leaf out, it’ll need as much light as you can give it or you’ll get a lot of really week leggy growth as your fig tries to find some light. Best to move it to your solarium now and treat it as an indoor plant until you can move it outside.

@JCT Do you think moving it the the solarium will help with the fig development? I always thought the Lattarula needed a greenhouse or a better climate. It get at least 100 figs off of each of the other plants, but this one rarely gives me more than one.
It is very cold here right now (20-30s day) and this is my most tender fig. Can it handle a few minutes going around outside the house to the solarium or would it be better to wrestle it through the house?

It is leafing out because of the temperature, not the sunlight, the others are going to as well unless you can regulate the heater down to about 40f.

There could be a lot of growth in the solarium between now and April, but it will still be weak because there just isn’t much sunlight. There is also the difficulty of adjusting that growth (and figs) to outdoor conditions. So I think it would be better for the ones that are still dormant to stay that way as long as possible.

If you can fit a garbage bag or something over the top of the one that leafed out it will be fine to move outside for a few minutes.

Just a thought but it should be fairly easy to skip over that radiator with a few fittings simple job if lines are exposed…for a plumber or handy person… so that you won’t have to deal with the same situation with other trees,

I’m going to have my heating company look at it and see if there is a way to change the piping. The furnace maintenance guy looked at it and thought it might be difficult to get into. The floor in the hallway on the other side of the radiator is heated, so who knows what is going on there! But I’m calling them next week and hoping. It is a bit more of a job than I am willing to try! Once we are through these 9F nights, I’m going to crack the window to drop the temperature a bit more. By next winter, I will have a better solution even if I need to frame out part of the garage or add a heated area to the shed. I’m just hoping to coddle my poor figs and dahlias (under emergency blankets/regular blankets in the coldest spot and staying 45F-ish) through this year!

I have some small plants in basement and they started to leaf out. I moved them to cold garage. It seems the growth has somehow stopped. With any other weak and think top growth, I’ll have to remove them. All container trees in cold garage are still fine.

I might be able to set up some additional light like I did for my Thai Lime. I’ve had the figs leaf out early at the old house, moved them into the my (previous) sunroom, and then played to careful game of getting them outside without burning the leavess. The lime is always a challenge, too, because it sunburns easily if I’m not careful enough. Extra fun because it is huge (over 6 feet now) and bites (spikey). 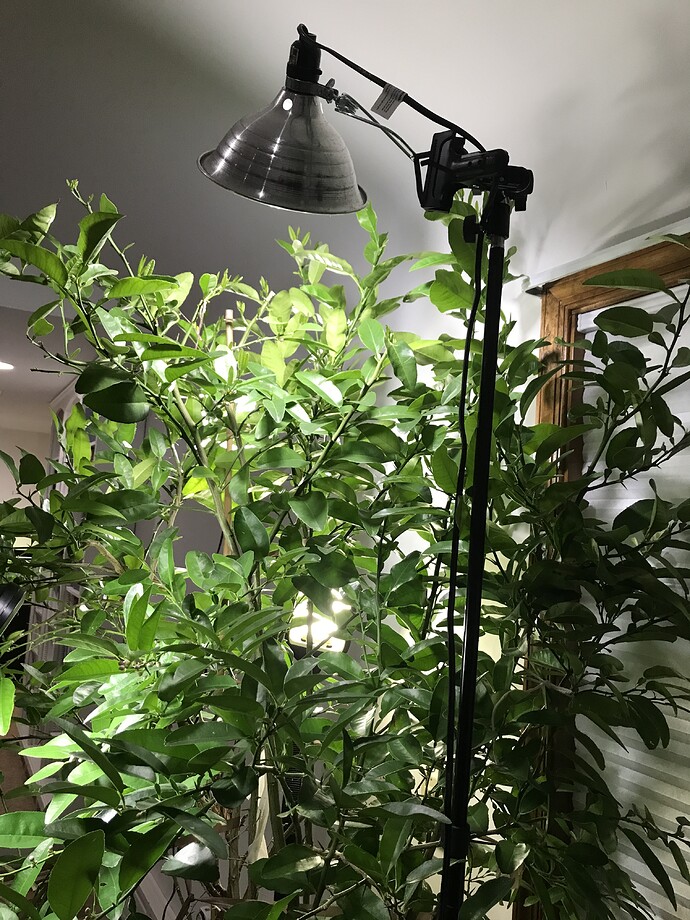 might want to move them outside before the last frost.
Give them a brief winter chill.

Your “issue” presents an opportunity since you’ve only had a few fruit previously. Start your season early in your solarium and get more fruit. Maybe you just learned about optimal chill hours to get that breba crop

As for other varieties I wouldn’t be surprised if they are only weeks behind. I have Chicago Hardy in ground in zone 6a protected by chicken wire fence filled with leaves. Works great. You can plant many of your named varieties in ground with protection to avoid this on hardier plants. Experiment with your rooted cuttings (maybe after a year) to see what is possible. Many train branches low to the ground or pin them down to cover in mulch.

@Jujube I will have to look at it as a fig experiment this year! I’m pretty sure the Chicago Hardy at least would be fine in the ground or even outside in the pot, but I’d be so sad if I’ve lost it. I’ve had these four for so many years. I tried planting some of the cuttings I accidentally rooted, but the darn voles destroyed them no matter how I tried to protect them. I may try in ground for my cuttings and see if I have better luck at this house.

I’ve moved the Lattarula to the solarium and it has leaved out. It is COVERED in figs. I don’t think I’ve seen this many figs on it for all the previous years combined. It has probably been waiting 11 years for me to figure out this is what it needed.

One of the accidental rooted little figs also broke dormancy, so it is in the solarium, too. With the colder weather, the temperature in the garage dropped a bit and everyone else is staying dormant. 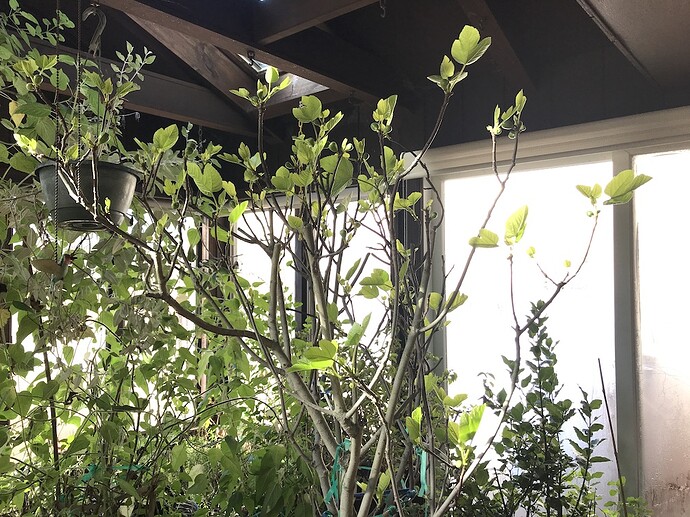 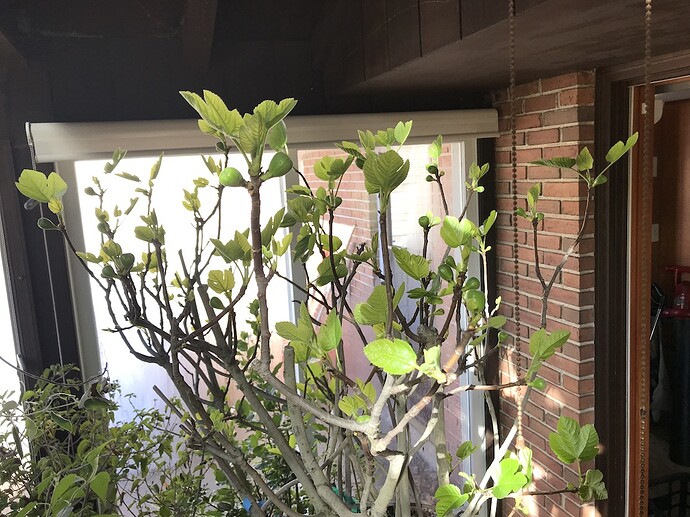 Glad it’s working well for this one! Keep us updated

Update on the figs! The three that broke dormancy early are very happy in the solarium. The Lattarula continues to grow some nice figs and far more than I’ve ever seen before. The two that broke dormancy late are less happy. I’ve been rolling them in and out of the garage since it warmed up and that has been working well. Until one night when I was away from the house until 9pm. The weather said 40F, but I seem to be in a cold sink where it can rapidly drop far lower than expected. Which it did, with the figs outside. It was ~32F when I pulled into the driveway and moved them inside. The leaves are all still alive, but now many have a brown tinge. Ugh. Hopefully, they will recover. 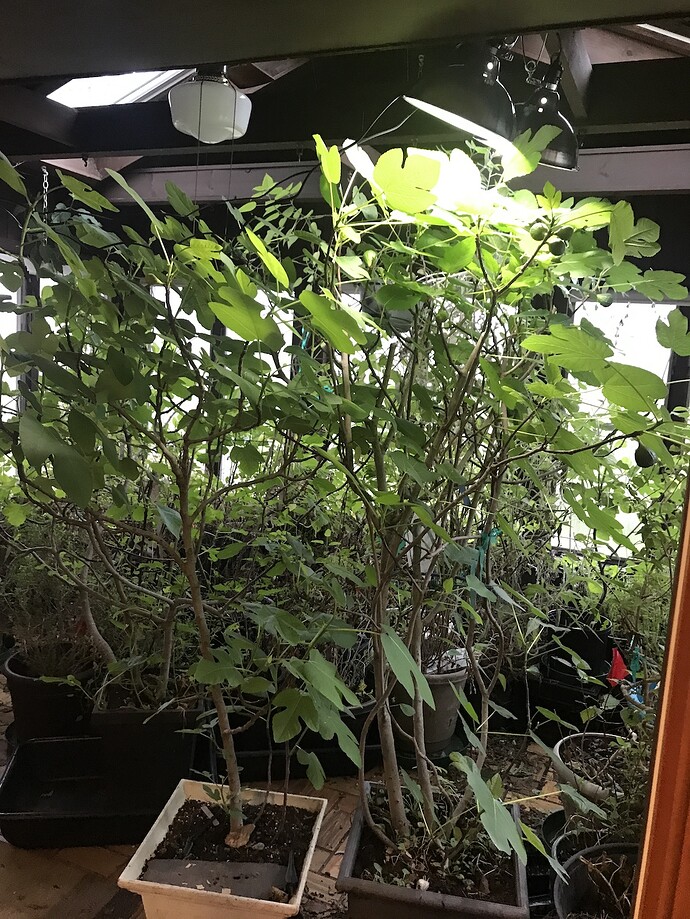 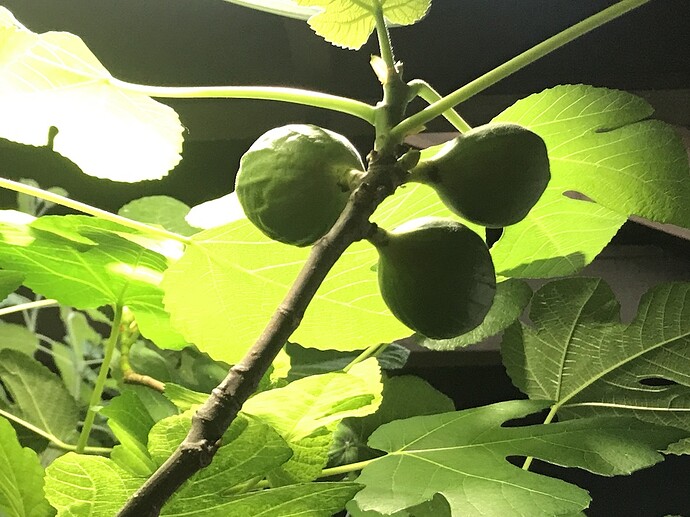 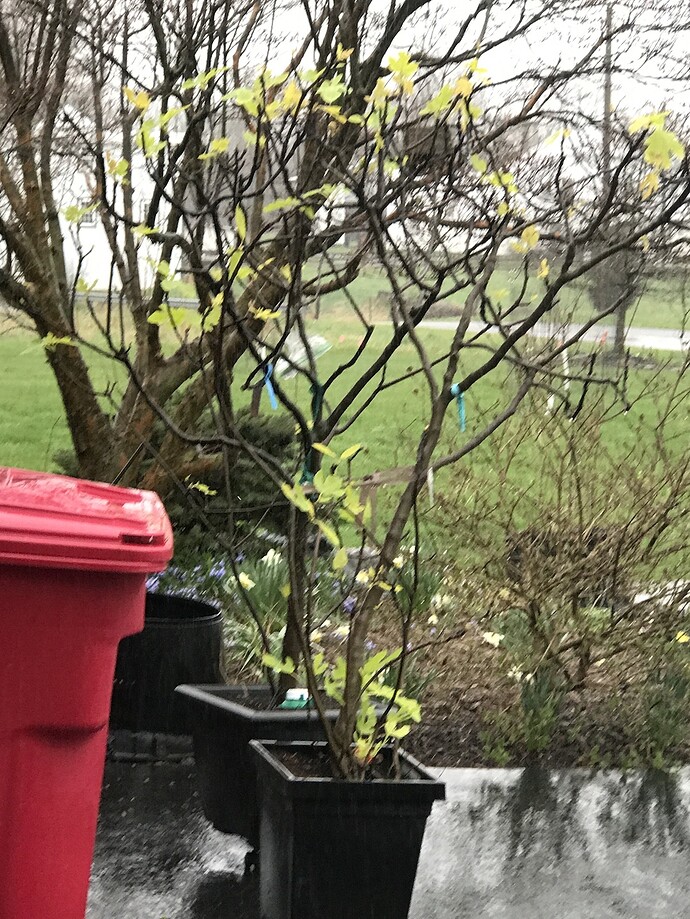