Seedlings from a female fruit cannot be self pollinated so they always show lots of variation. With a persistent male parent half should also be persistent, half will be male so that leaves 25% persistent females if everything goes to plan.
Here are a few different seedlings from a controlled cross that I hope will yield some common figs. These were interplanted with watermelons, hence the wide spacing, still deciding how best to take care of them over winter. 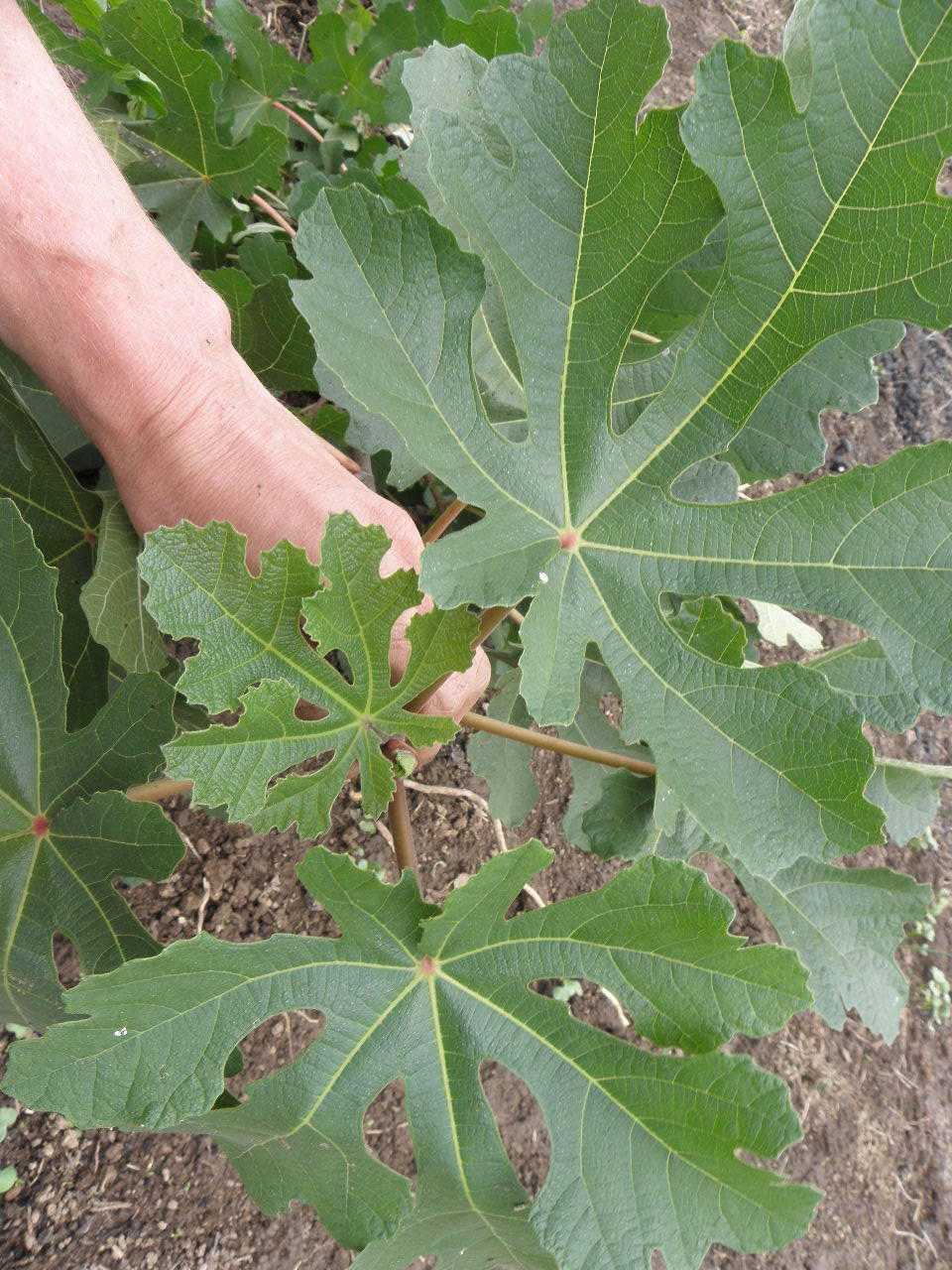 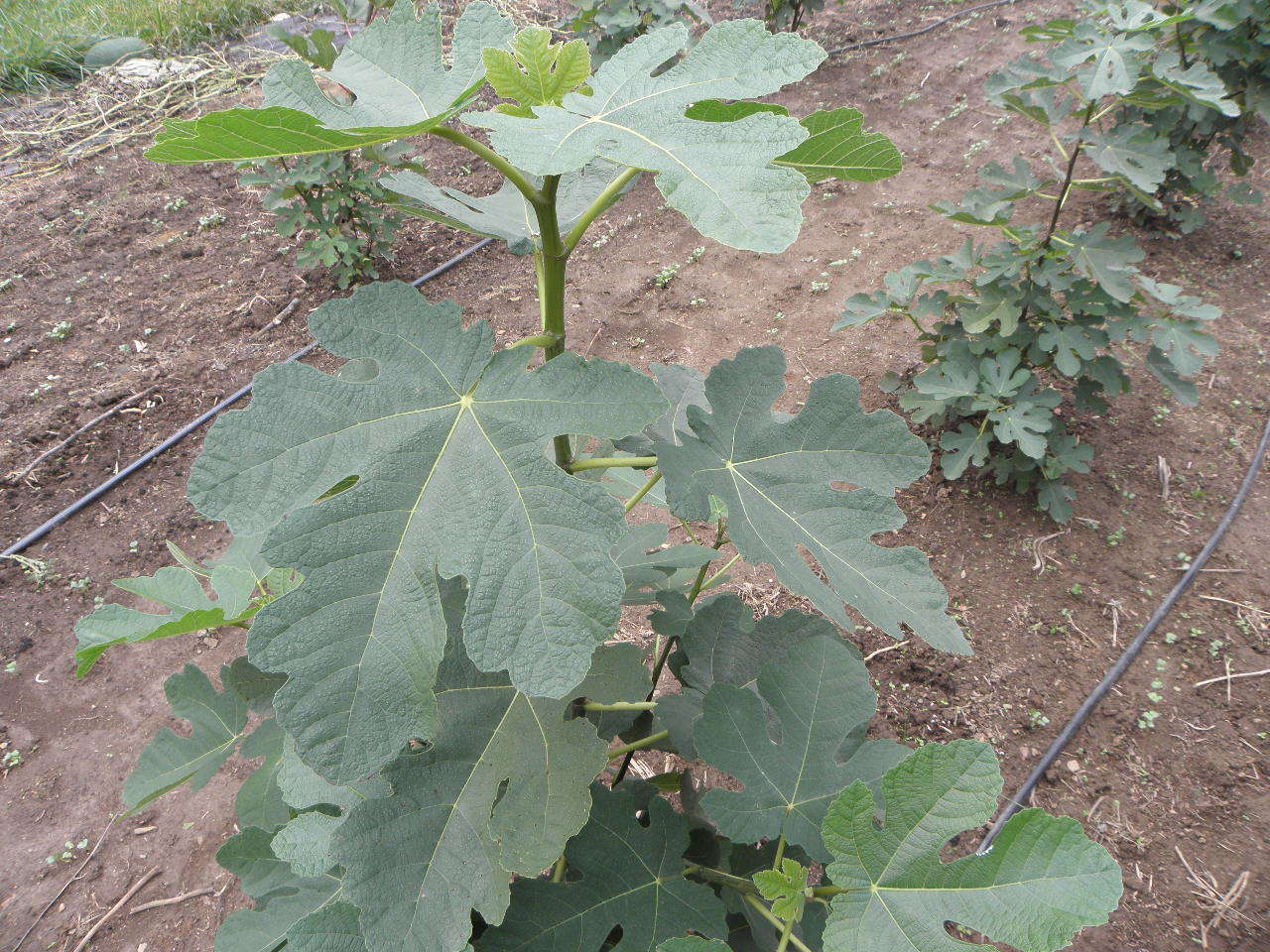 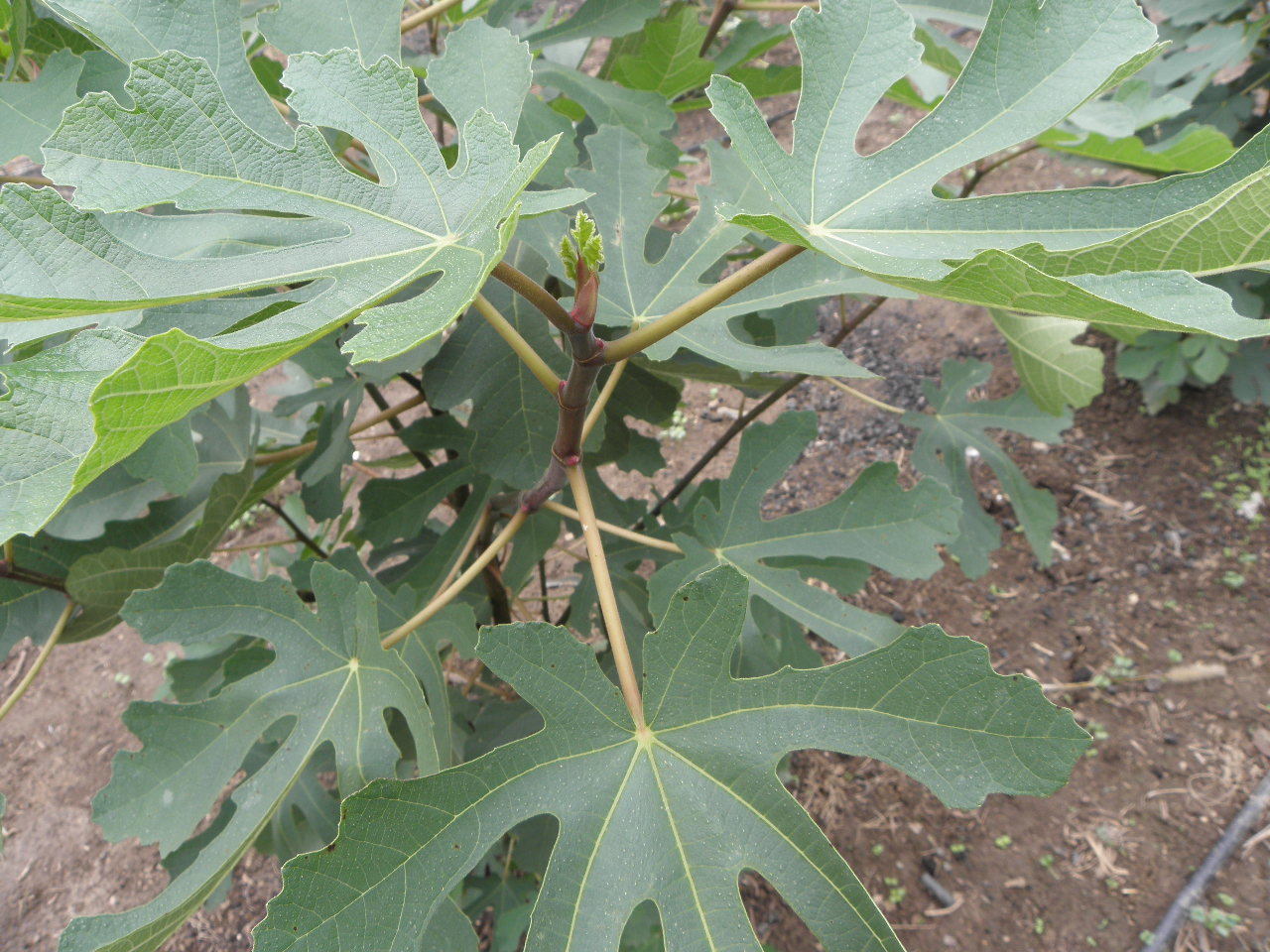 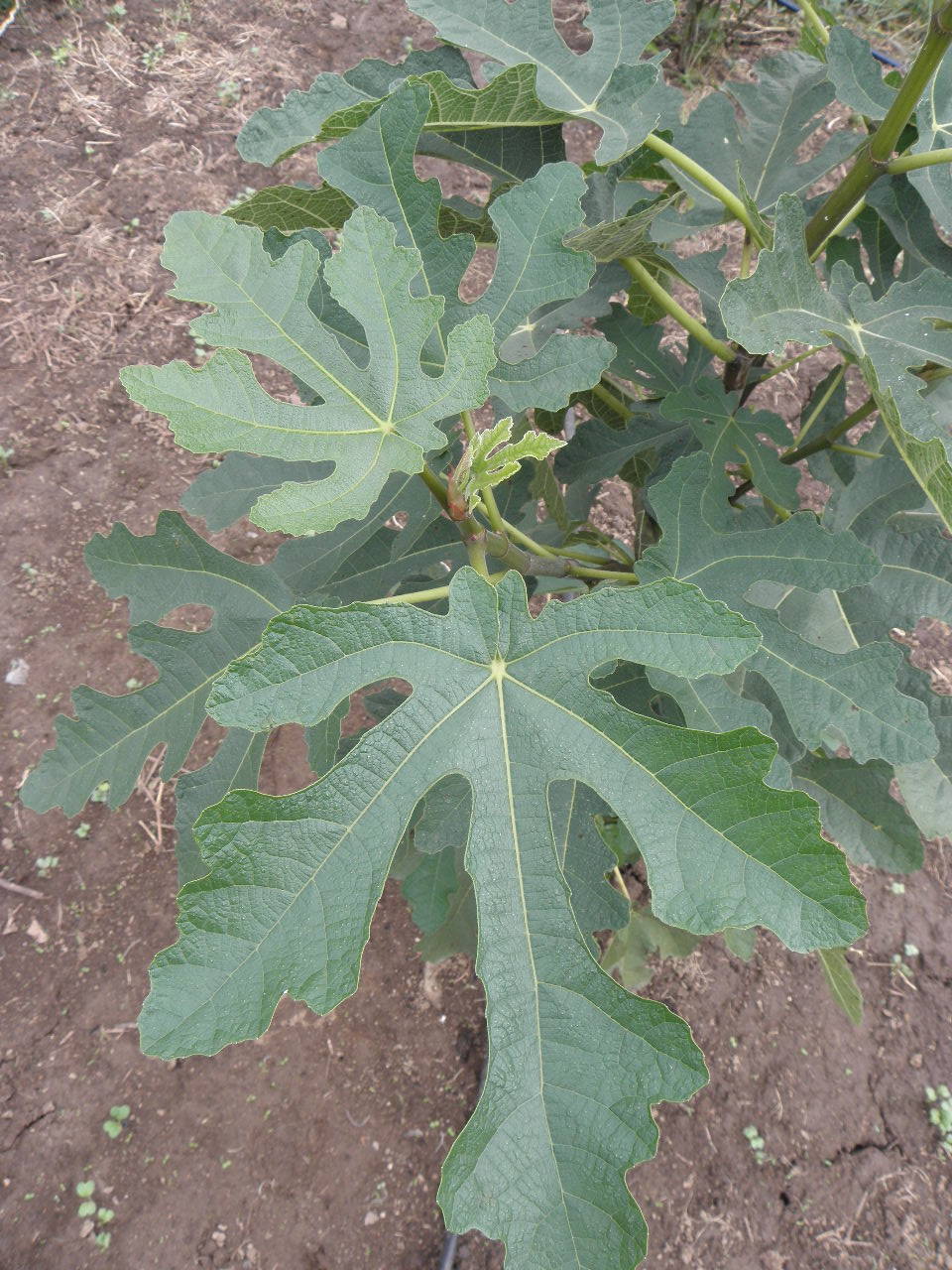 Awesome! Can you talk a little about how you pollinated them and germinated the seeds? Also, is all that growth just one year. That’s impressive!

Sure, I got a couple caprifigs to attempt to keep the fig wasp here, and one did not drop the breba crop it’s 2nd year. 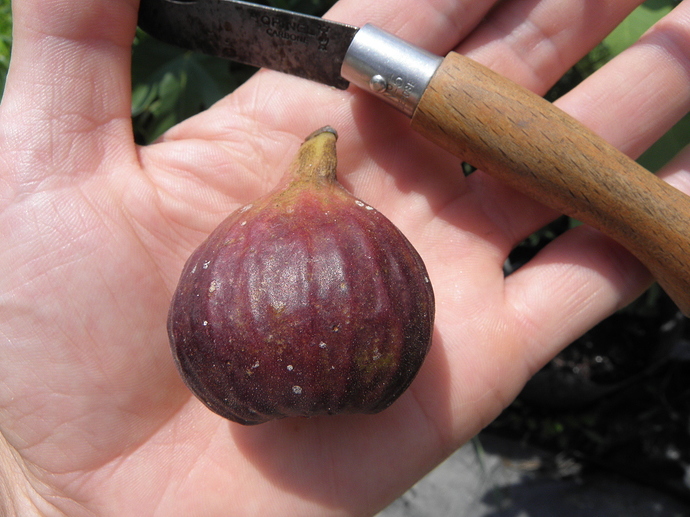 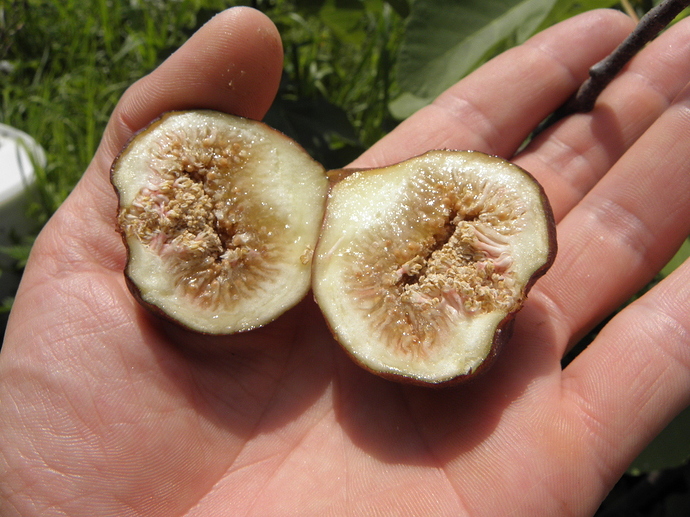 The growth is all this year, some are over 5ft., they sucker and branch like crazy when growing fast but apparently reach fruiting faster as a single stem so I made an effort to thin them early on. 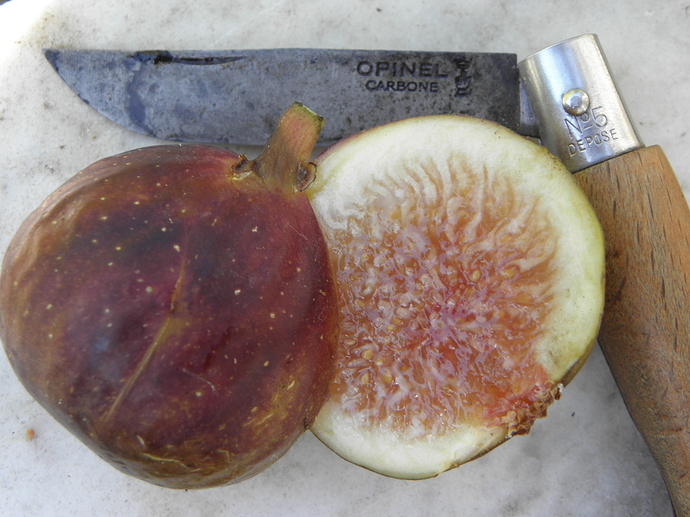 Thanks. And what attributes are you looking for in your crosses?

Seeds were germinated in shallow seed starting trays, sprinkled on the surface and pushed in gently/moistened, set on a heat mat @85 f. and covered with newspaper that was misted to keep moisture in. They were pricked out early into 50-72 cell seed flats. They are very vulnerable to damping off until they have several true leaves.

The mother has a thick skin that resists insects very well. The next potential phase is to select and cross a persistent male with that trait to an early variety like Florea or Hardy Chicago. I have some seedlings from a Verte mother as well.

These have really grown! I cut the roots on one side shortly after the first post and pinned them flat to the ground, then covered with 2 layers of Agribon, a third were also buried with soil, and a third were covered with black ground cover. The ones with just agribon looked rough this spring, but recovered most of their top growth. The ones under the ground cover got eaten by voles pretty badly, a couple did perish unfortunately, the ones buried did the best of course. It is hard to tell them apart now though. 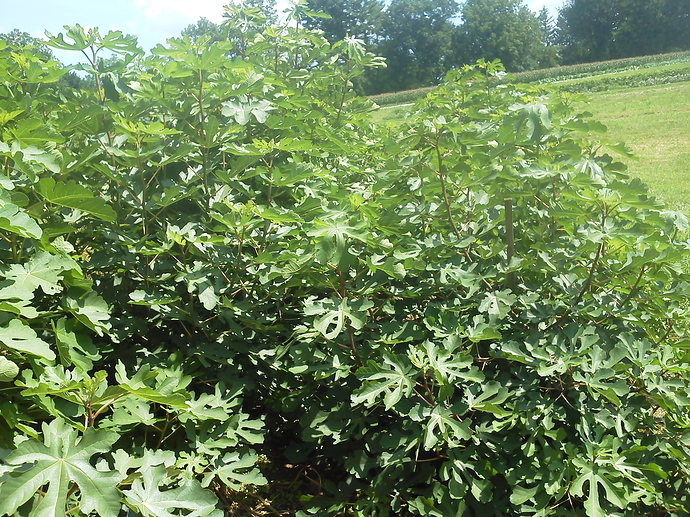 IMG_20170813_140209.jpg2592×1944 1.55 MB
About a third of them have set figs, won’t be enough time for them to ripen (although a few in a different situation may have enough time), but hopefully it will give me some indication of their sex and or pollination needs. I’m happy that some seem to be precocious though 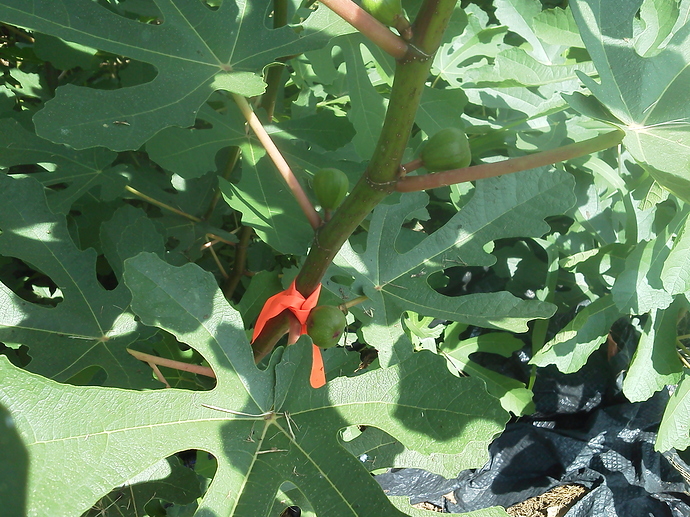 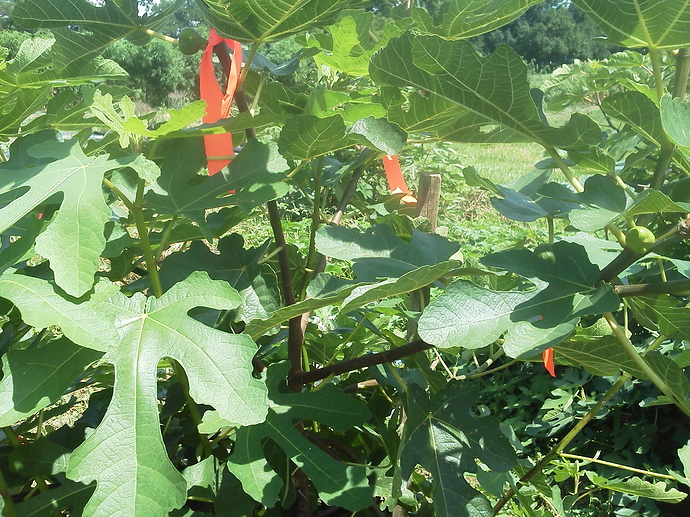 Great experiment Brent, thanks for sharing and I hope you continue to update with your findings.

That’s fantastic. I don’t understand anything about the wasp, the injecting of the filament into the fruit (that’s how I read it) and may I assume figs are hermaphroditic?

Are breba crops the 2nd crop (for instance the ones that would come into fruition if I were to bring my fig into a really warm greenhouse in full sunlight for example) and let them set more fruit? Or, are they the first round of figs to occur? And what is a caprifig and a profichi crop?

Sorry to bombard you with questions.

I love a nice game of bombardment

Figs are really complicated… I think all of the tropical species are totally hermaphroditic. This is an awesome nature program that outlines the life cycle, as well as the parasitic wasps that attack the fig wasps.
https://youtu.be/xy86ak2fQJM

Ficus carica and a couple other species have “female” trees that aren’t able to host any wasp larvae though. Caprifigs are still hermaphrodite, with stamens in the first crop (for caprifigs it is called the profichi, while for edible figs it is called the breba) and host the wasps which carry the pollen on to the next crop (mamme/main crop).

Wasps that enter female figs cannot fit their ovipositor down far enough in the long style of the flower to lay an egg on the ovary and only accomplish pollination, which is a win for the tree. Caprifigs can and do pollinate themselves, but produce far fewer seeds because most are eaten by the fig wasp larvae, the seeds are less likely to be spread by animals also.

There is actually a third type too that has long styled female flowers and stamens, they are called edible caprifigs. These were used in the Davis breeding program but their genetics have not been explained that I am aware of. I tried using one called Gillete to pollinate also but didn’t get any viable seeds, could not see any pollen on the stamens either.

Ficus species have evolved a very fascinating life cycle, some variation between the over 750 members of the family, but all have developed relationships with a uniquely adapted wasp(and Brent😊). Great read on the subject is in the book ‘Gods, Wasps, and Stranglers’

Aha, I get it. Next is to watch the video… which I’m looking forward to.

First ripe fruit is a real looker! The ripest part at the bottom was very good, flavor is similar to RdB. 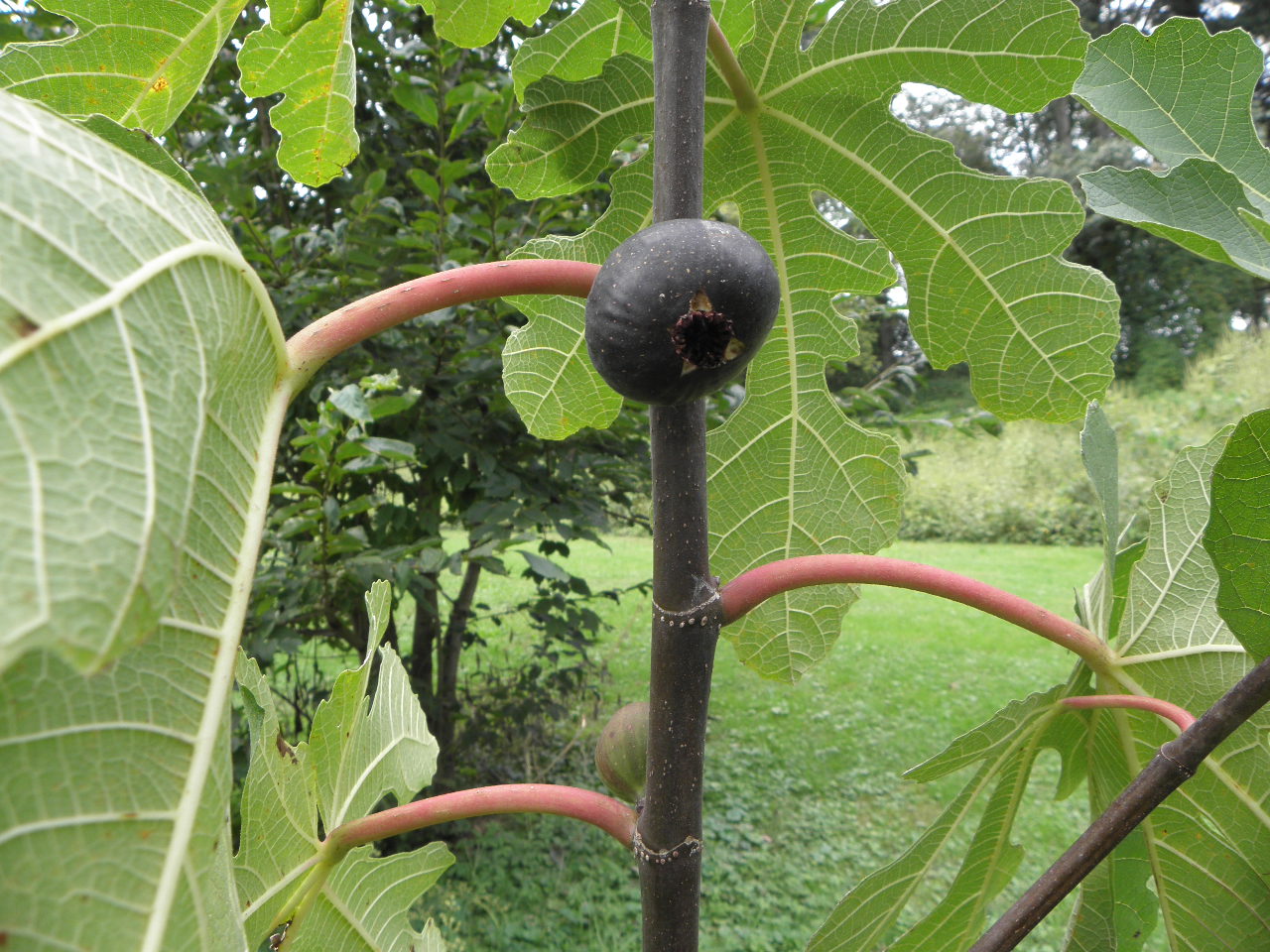 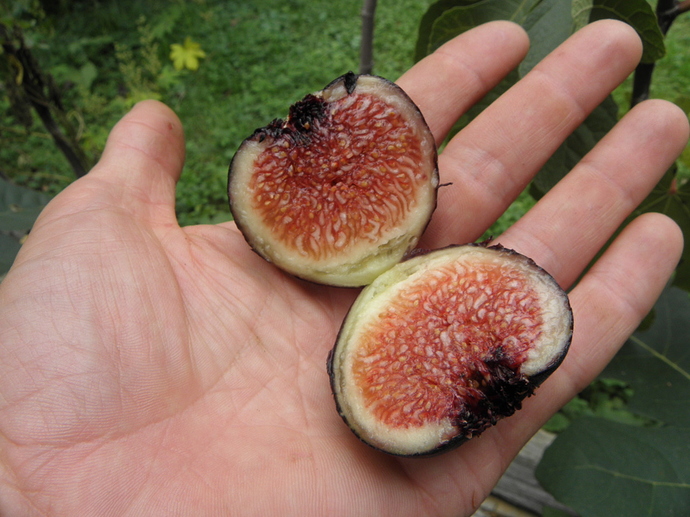 Looks great! Congrats. What are the parents?

All of the ones that are advanced enough to fruit this year are Gludi x HD Capri. HD Capri reminded me of RdB a little. I have a few from a Verte type mother as well.

that is a cool fruit

Hard to believe these trees are only a year and a half old, some of the trunks that survived last winter are 3" thick. Some suckers grew over 10’. 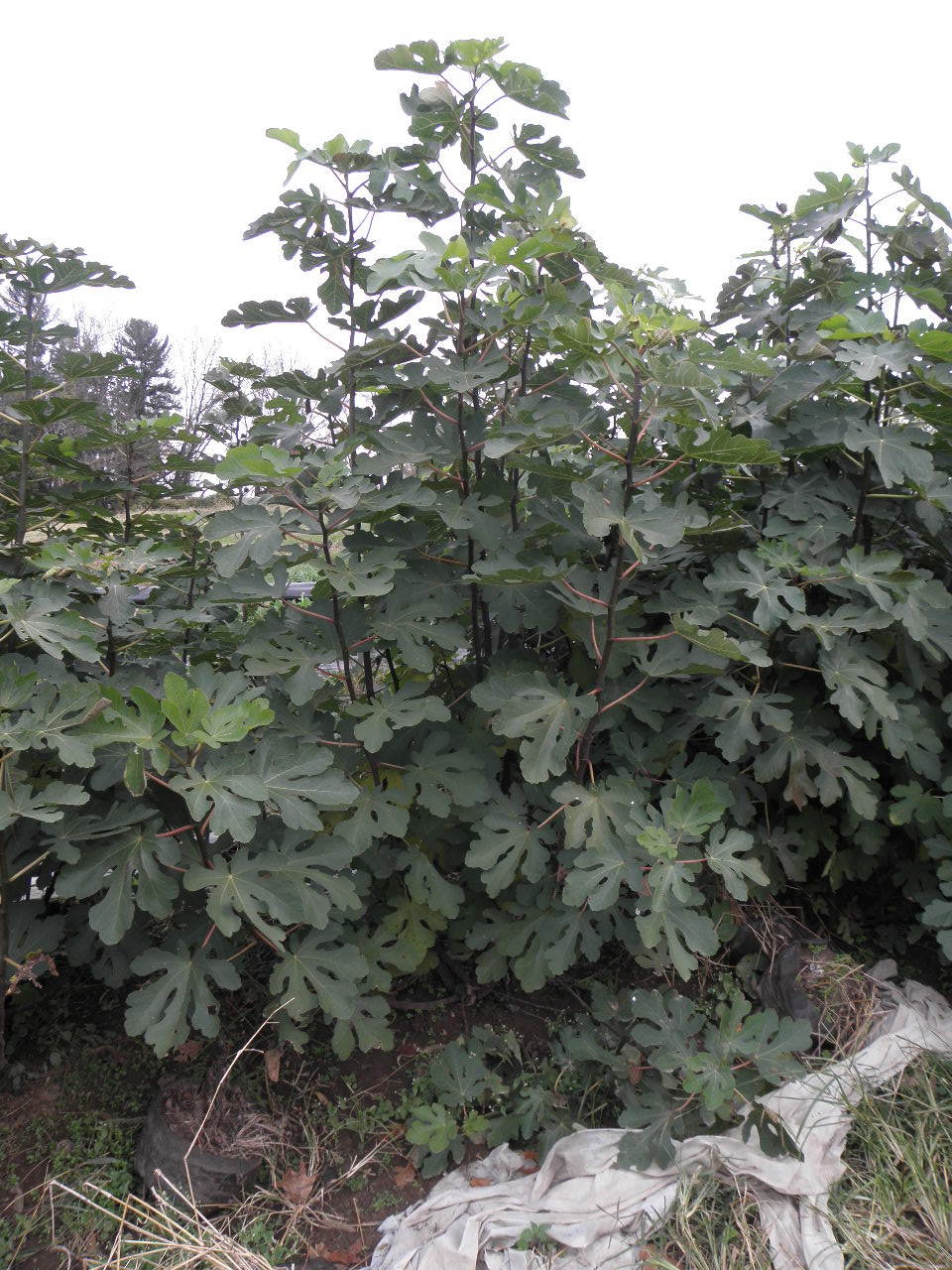 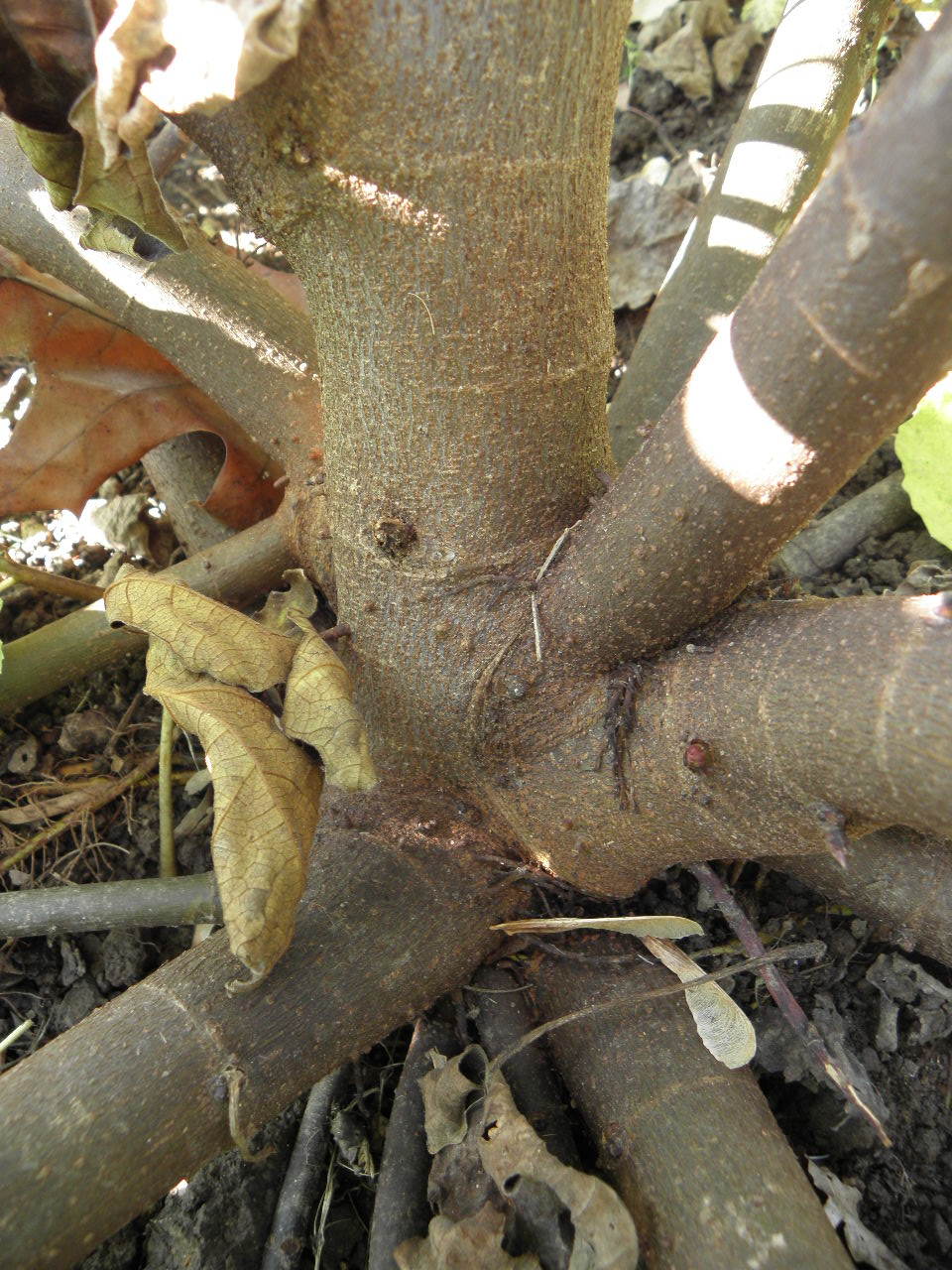 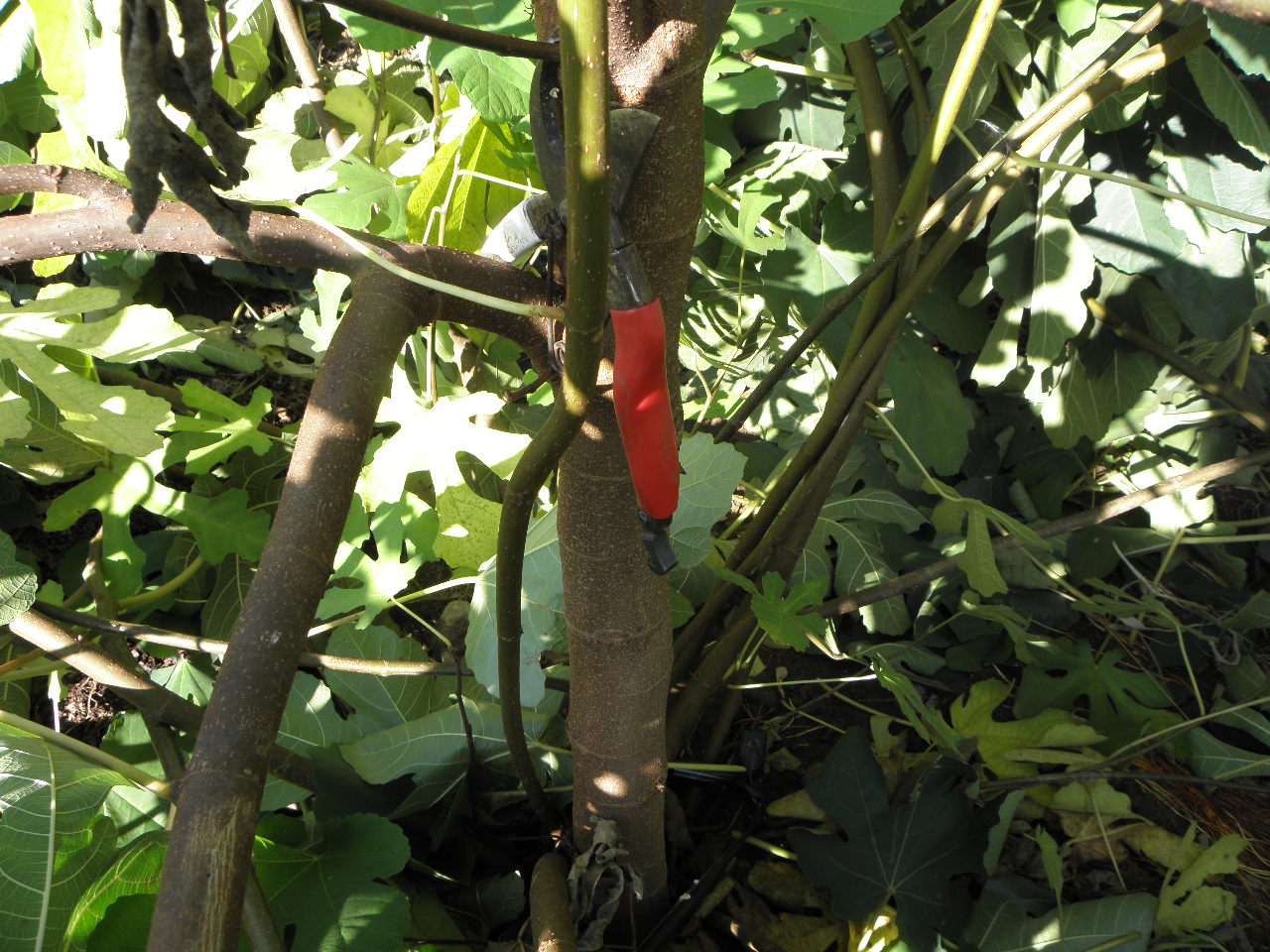 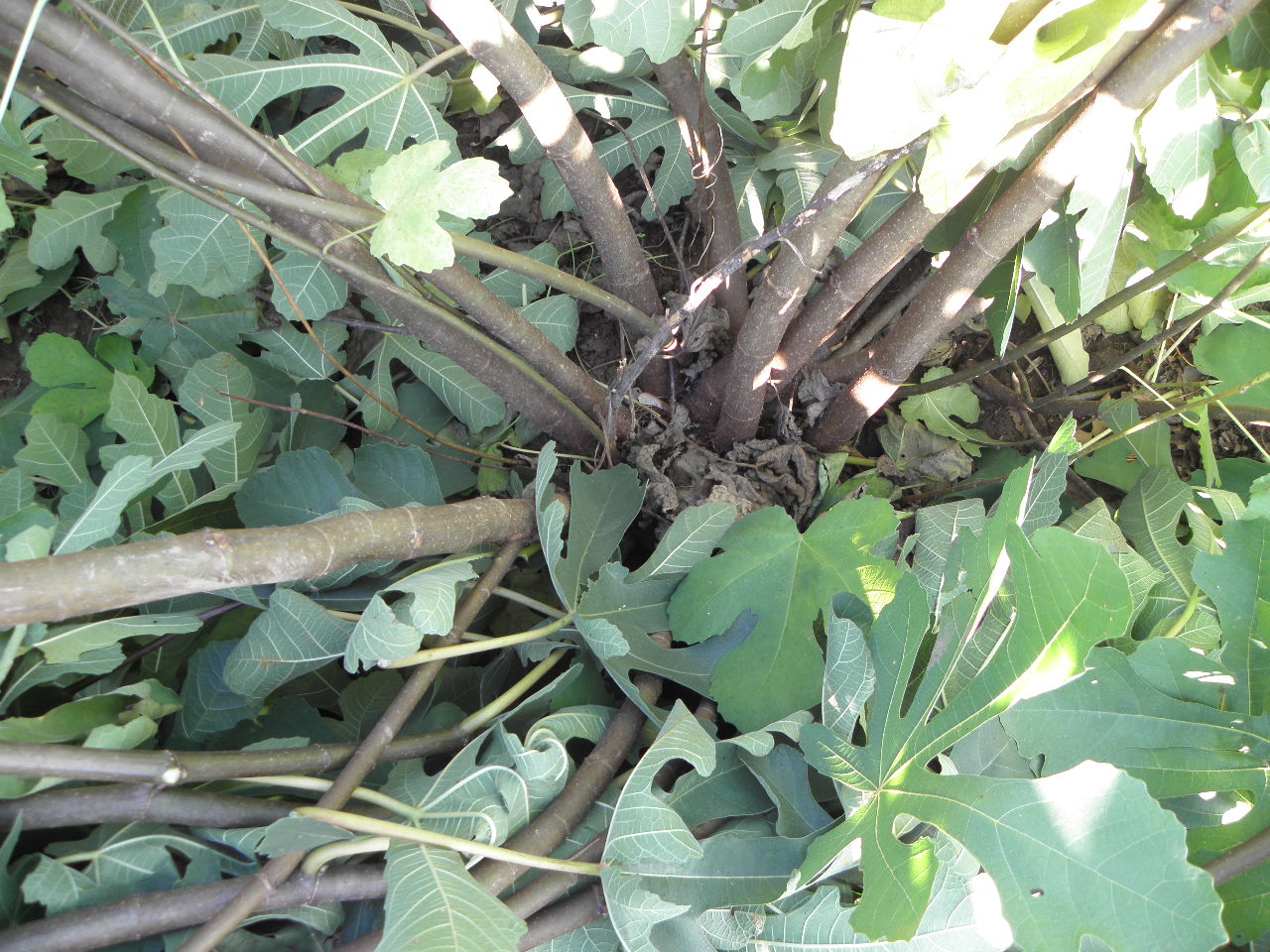 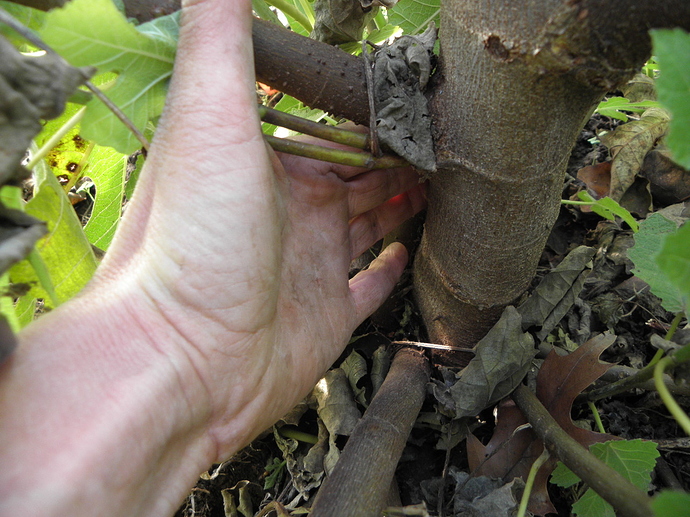 A few of them almost had time to ripen a fig. Oddly enough, none of the ones that formed fruit this year acted like they needed pollination, maybe parthenocarpy and precociousness are linked? It also looks like they all have long styled female flowers, though presumably half are male and will produce stamens in their breba crops. 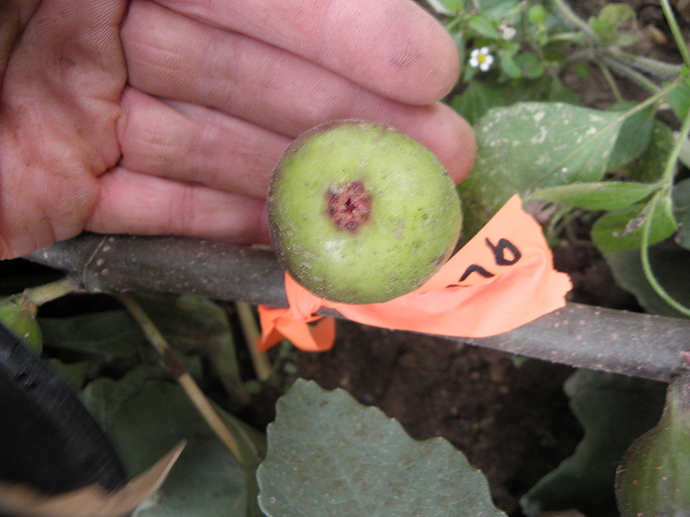 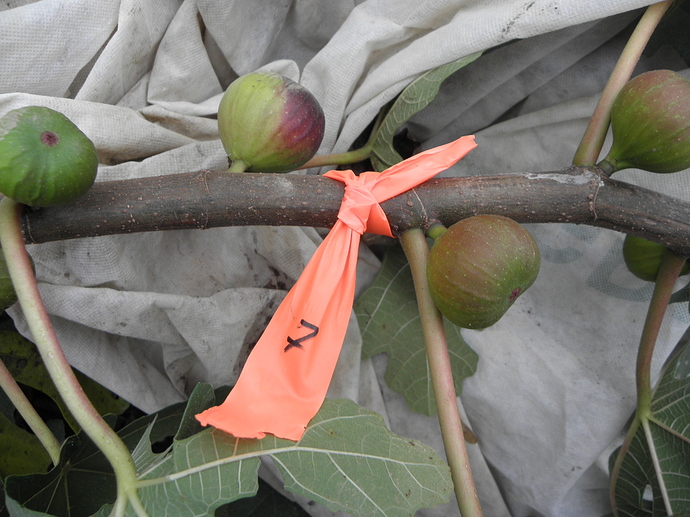 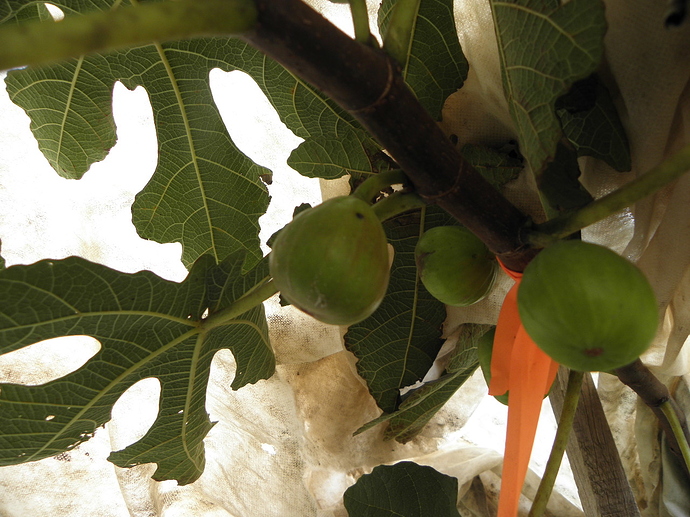 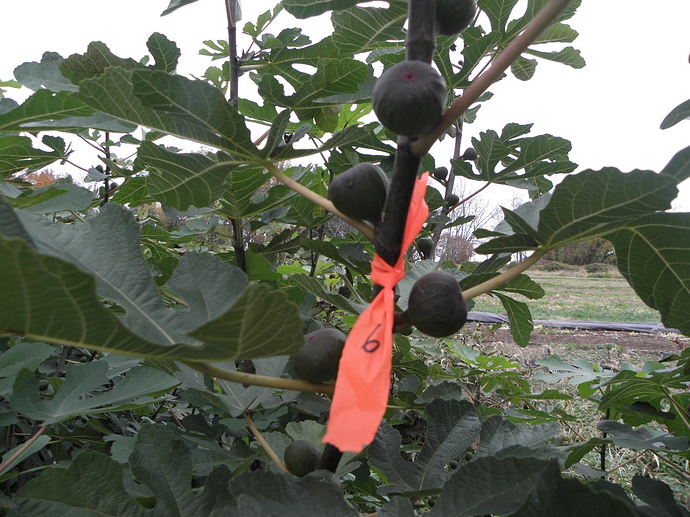 I sort of wove them together with each other and used some weights to hold them down to cover with 3 layers of row cover before temperatures go down to around 20 friday night. I’d like to preserve the breba buds, will probably add a solid layer over that in winter. 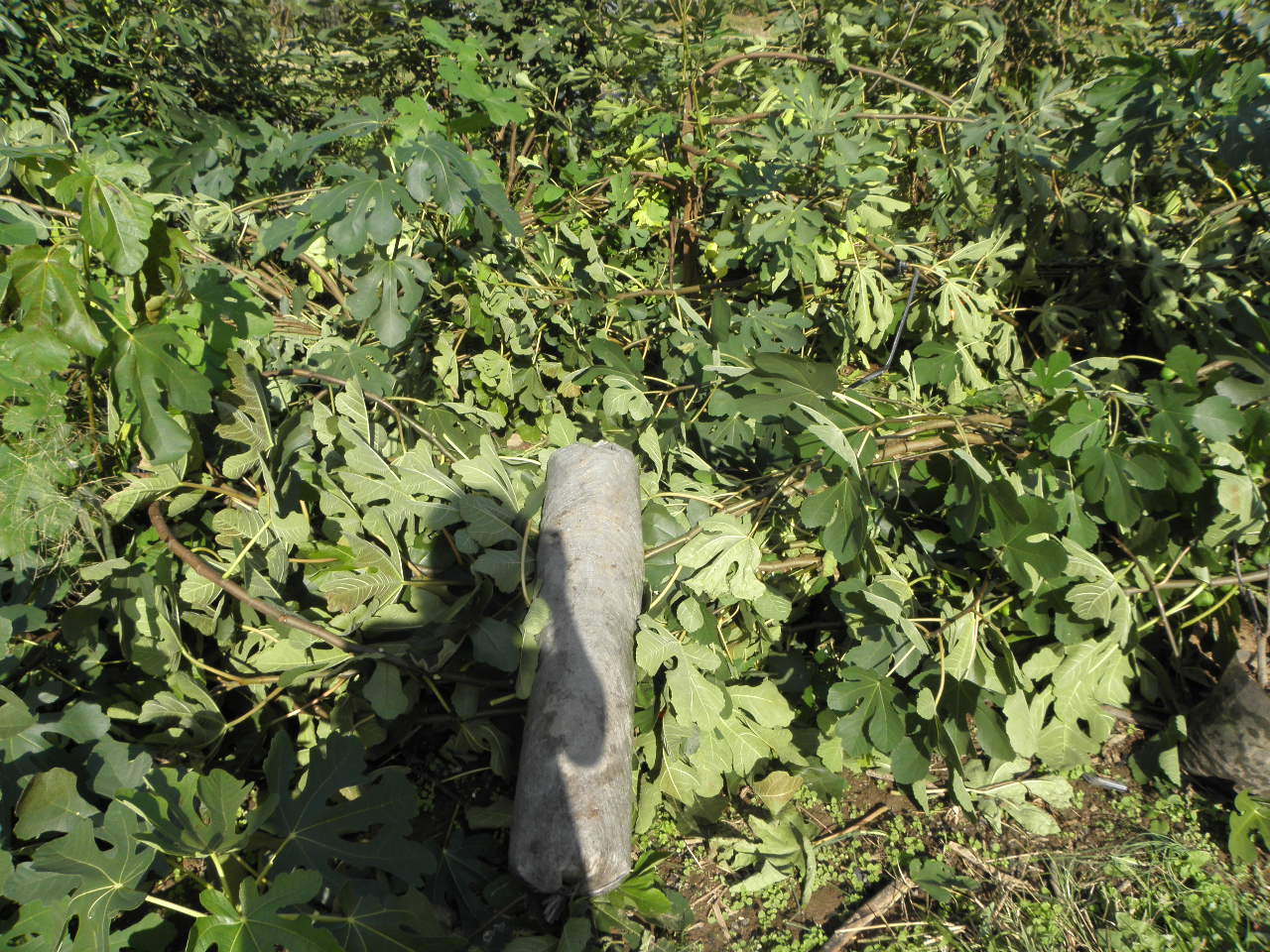 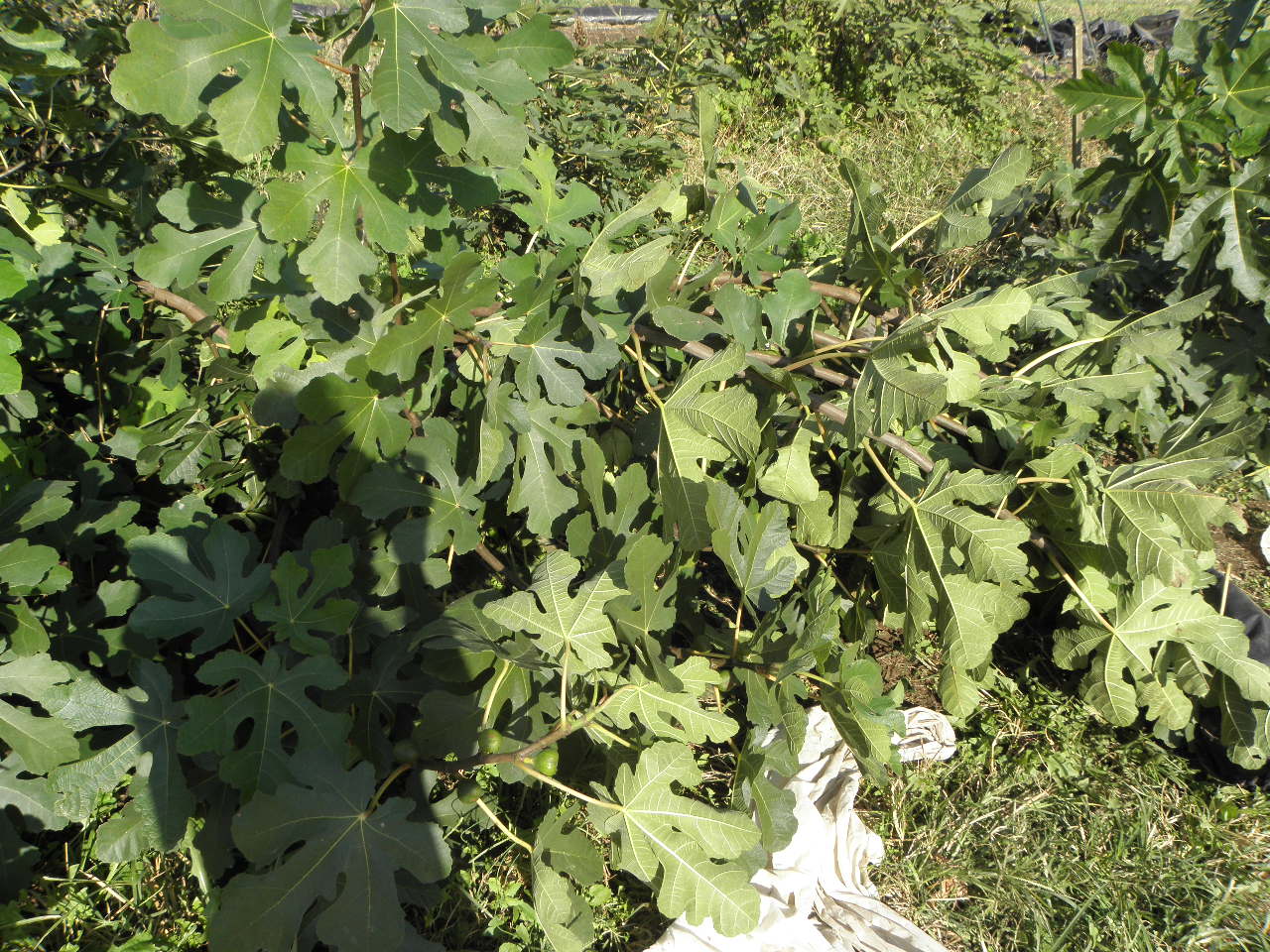 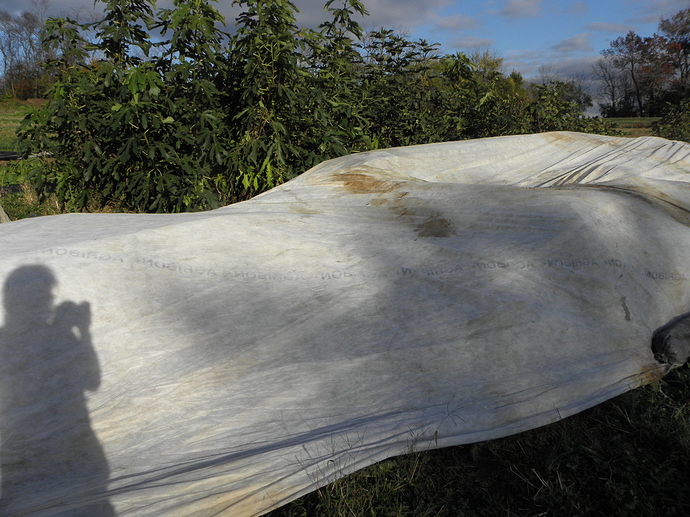 Second ripe fruit from a tree in another compost sock, it set around the same time as the one above so it is probably a late ripener. It was not bad, unique taste, sweet enough, wish I could have slowed down to experience it more. 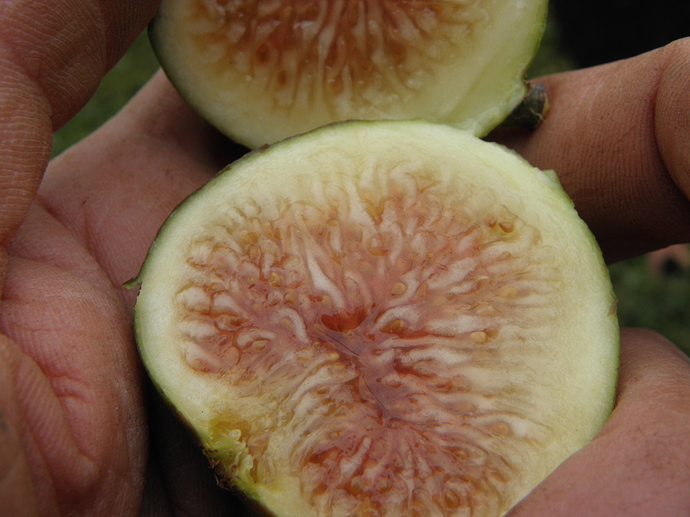 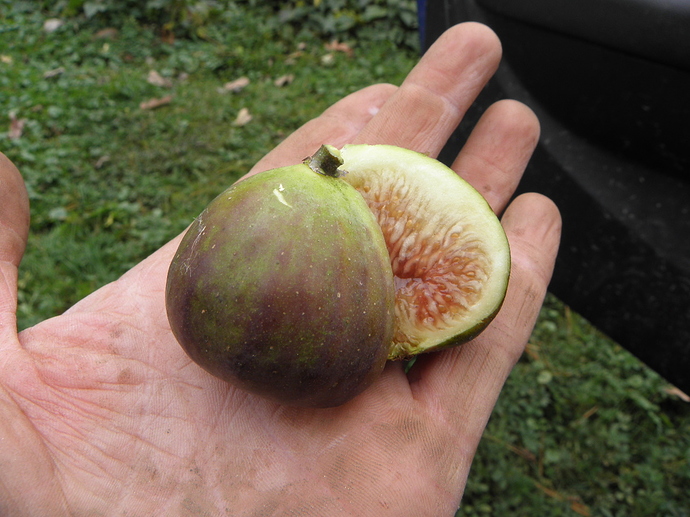 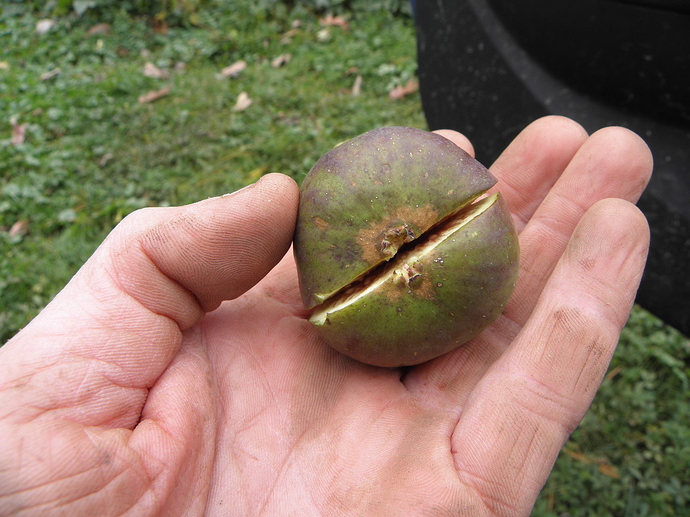