Finally got a redhaven

I know nothing really exciting but for me a big deal.
My plan for my little orchard has always been to start with the tried and true types, or atleast what I think are tried and true. As far as peaches go my plan was to plant the types that a commercial orchard grows about 30 minutes east of me.(redhaven, glohaven, loring and one other i forget) Well that hasnt really happened. Lack of like varieties at the local nurseries + me not being very patient messed that up. So Last spring i started with Ranger, Elberta and Oh Henry. Apples I got Fuji, Gala, Granny smith. Plums, Santa rosa, Methley, Superior(DWN tree). I wanted to give myself the best chance to succeed with varieties that seem to be no brainers. whether I have done that i dont know, still learning. I do want to get a pluot or 2, a nectarine or 2, a couple cherry(why are they so stinking expensive) and then maybe some of DWN’s fancy stuff LOL.

thanks for all the knowledge you all pour out. 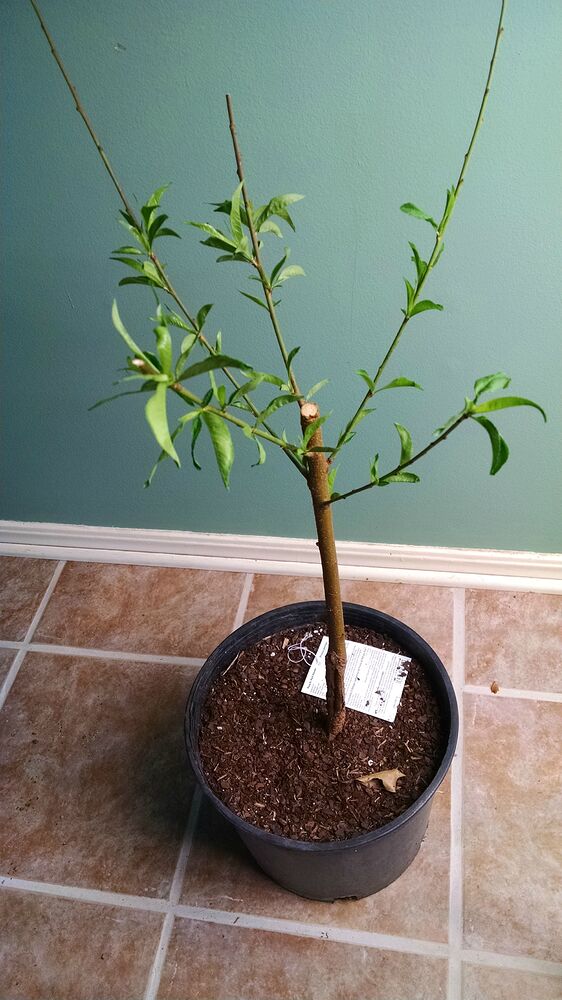 2188×3888 1020 KB
Ok so why is it 1. in a pot and 2 in the house. I bought this at Tractor supply about 3 weeks ago. I still havent decided where in the orchard to put and the weather has been crazy. 70 one day then 20 and snow the next. Plus this was a bare root tree in a bag filled with sawdust. One i bought from them last year died so i wanted to try and make sure this one lived. to my surprise it has leafed out nicely. It was about twice as tall but obviously i headed it off Ill probably remove one more branch and leave 4 for the scaffold branches.

cant wait for spring and show you all my others.

Looks great. As another relative newcomer, I can tell you that for me personally, Red Haven has indeed been an outstanding performer for me so I think they are so popular for a reason. You also might enjoy knowing that mine was about the size of yours when I planted it and I actually got a few peaches the second year it was in the ground! That was amazing to me. And the third year I got probably 60 peaches from each of my red havens, though to be honest I should have thinned them a lot more because I got a lot for a 3 year old tree but they were quite small. Good luck.

I like redhaven. Its very good quality, robust, productive, widely adapted–to a fault. Here in Z5 we have a supposedly “quality” nursery that commonly offers it on Nemagard rootstock. Very warm weather rootstock. Basically it has no chance here with that rootstock. Unless you haunt this forum you would never know that.

So, order your trees bare root from a quality nursery that specializes in the fruit tree business. Those potted trees often end up not being true to label anyway, and a bare root tree will provide at least as good a start. That tree was probably a bare root tree the nursery put in a pot shortly before selling it to you.

Alan. It was a barefoot when I bought. I put it in the pot. You sound annoyed with my post.

Not at all- just aiming at brevity. Sorry it came across that way.

I was just suggesting if you try a lot of sources that ship bare root you may find the varieties you seek.

The ones you mention are all older, tried and true varieties. I’ve never grown Glohaven but all the “Havens” tend to be good peaches. Loring is excellent, with beautiful flowers but always comes with a warning about susceptibility to late frost. Never had Loring fail to bear here when others succeeded but a broader test would probably bring different results.

There’s lots of other varieties of peaches that would work great where you are, I bet the orchardist you mention has been growing those for decades, and being a conservative grower figures, if it aint broke…

His (or her) were also chosen to spread the harvest season, which is a particularly good idea for home orchards.

Congrats on your tree Mike. Looks like it’s off to a good start. If you like to keep your trees low, that tree is perfect for shaping because the feathers start low. You might want to trim off the ends of the shoots which have no foliage, but that’s not a big deal.

I agree with Alan, big box stores sell quite a bit more mislabeled trees, so it’s a crap shoot there.

I too like Redhaven, so well I’ve made numerous copies. Higher chill peaches like Redhaven (and the Ranger peach you mentioned) might help you a bit. My impression is that Tulsa has more of a problem with frosts than other parts of the Midwest.

I always thought Tulsa was a nice place btw. My wife lived in Broken Arrow for a while. Years and years ago Casa Bonita (with the little flags you raised up when you wanted more food) used to be my favorite restuarant. I went there a few years ago and it had declined significantly. Only a shadow of it’s former glory. But the town was as nice and clean as I remembered it.

Alan. No worries. Thanks for the info. I do have a few on my wish list that I will have to order.

Olpea. You got it right about late frost here. Last year we had single digit days early march and Livesay Orchards had to hover helicopters to help their trees from damage.
I never went to casa Bonita. They did try and revitalize it a few years ago but it failed. I actually live in Bixby but work in Tulsa. Parts of the city are still very nice but the streets are getting bad.

That’s what I do most of the time. Its relatively easy to spot inappropriate varieties. Home depot insists on selling ‘Dorsett Golden’—a Bahamian apple here, apparently on the theory that if it looks like ‘Golden Delicious’ it must grow like one.

Rootstock is more of a mystery. If you are buying a popular and widely adapted variety like ‘Redhaven’ from a nursery you could get stuck.

Well i guess I’ll order a redhaven and call this one a “maybe redhaven”. It was only $12 so no big loss if its not.