I’ve had these pawpaws for around 7 years, they’ve bloomed for several years but this year is their first fruit set. Lost the graft labels to rodents, but some branches are Rappahannock, Sunflower, and Mango. At least one is from “Improved” seed. 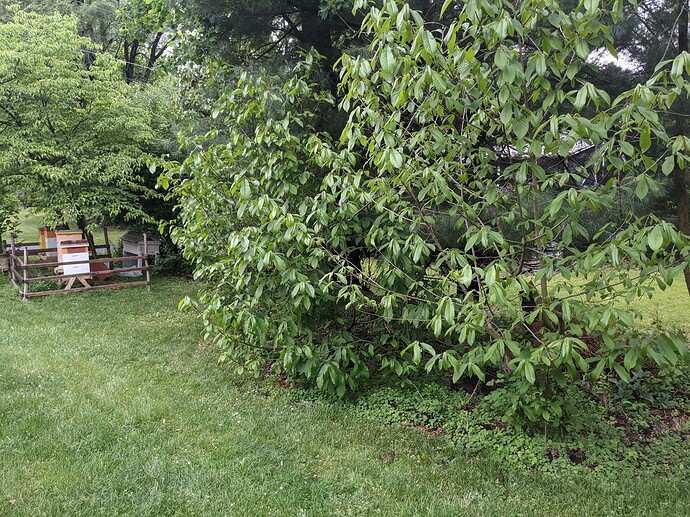 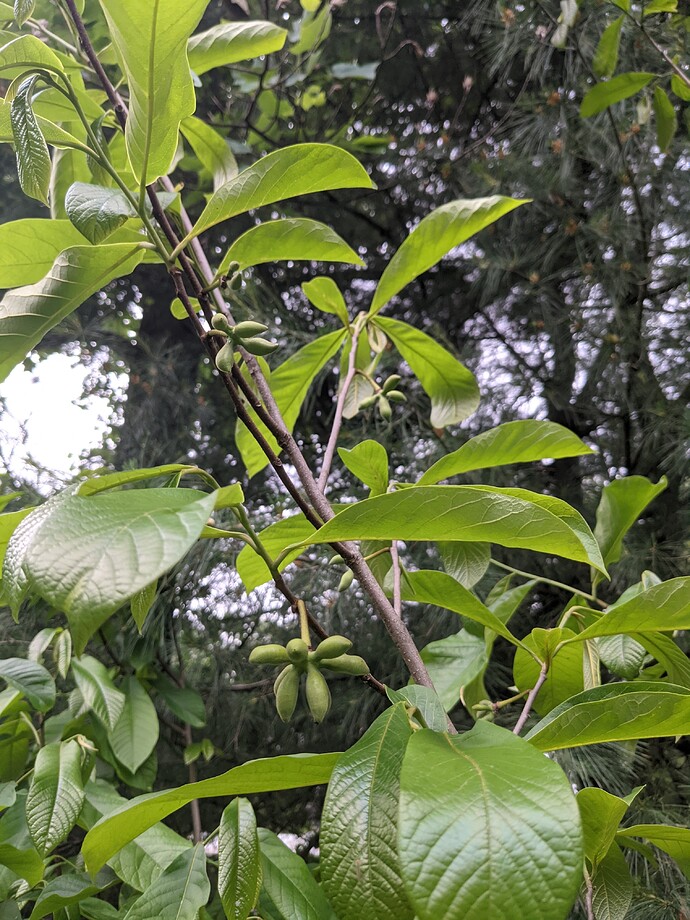 Did you try hand pollination previously or were they left to their own devices?

Last year I tried hand pollination but it didn’t work. This year they were left to nature.

Last year I lost all my pawpaw flowers (as well as flowers and fruit from all my other in-ground trees except a few apples) to the May 9th freeze. I wonder if the same happened with yours. Pawpaws usually bloom late enough to avoid any major freezes or frosts but last year seemed like a freak event.

I had about 30 flowers this year. Some where open for a week and some not completely open 3 days ago. After two days of heavy rain and wind there are no flowers and I don’t see any fruit. Either the wind removed the flowers or an animal did. I didn’t hand pollinate but next year I will.

This year, we did not get late freeze. @Preston kindly sent me some pollen and I hand-pollinated Shenandoah and Sunflower with a small paint brush. Heavy rain did not arrived until after I saw some fruit set. Still, it is too early to celebrate.

Getting my pawpaws pollinated has proven trickier than I ever imagined. I planted them 20 ft apart- way too far apart. So I’ve been grafting several varieties into each tree over the years. Catfish bait worked one year, not the next. Fish emulsion worked one year, not the next. Ditto roadkill. Dead fish failed entirely this year. Have to be a gymnast to hand pollinate, may hire someone young next year.

Hambone,
I shall tell you how dedicated I was re. hand pollinating pawpaws

My 5 ft tall Shenandoah had a lot of flowers this year. My 8 ft tall Mango had no flowers (but a Sunflower graft on it had a few flower clusters).

This year I fertilized both trees with composted horse manure. Since Shenandoah is short and its flowers were facing down, I had to kneel on the horse manure and look up trying to use a paint brush dipped in pollen to pollinate those flowers.

My pants (knees) were dirty with horse manure and my neck hurt from all the looking up. I sure hope I have some fruit set after all the work I put in.

It’s possible. I thought I had fruit set last year but they all fell off.

I was just about to ask how your Mango is doing this year. Go figure, mine is the same way still.

All 4 of my trees that I planted in summer of 2016 are around 7ft tall (though Mango is a bit bushier than the others since it seems to like putting out more side growth). Allegheny and Shenandoah had tons of flowers this year and are developing lots of fruit clusters. Wabash had a small amount of flowers that bloomed later than the other two and is also developing several fruit clusters. Mango still will not put out any flowers though lol.

I think I got that variety in 2016 in the hopes that I would get fruit sooner from it since it is known to be a fast grower, but it seems that that doesn’t make enough of a difference to make up for it’s apparent lack of precocity.

LOL. Exactly what I’m talking about. I hope you get a big take.

My Wabash is 2 1/2 feet tall after 4 years and has several fruit clusters. I wish it would grow faster.

Wabash is the slowest of my original 4. It may be 7+ft but it’s not branched out as much as the others. And it was my tallest when planted at 3.5 ft. It was from a different source than the others though (first 3 from Edible Landscaping and Wabash from the Ohio festival).

Both of my Mango and Shenandoah were potted plants when I bought and put them in ground in 2016.

Mangp outgrows Shenandoah on a yearly basis. It is twice as big now.
Shenandoah has flowered for the past few years. Mango had one flower this year that promptly dropped it before it even opened.

I hope it is a sign that Mango is almost ready. We’ll see next year.

I’ve had a similar experience. I have a PA Golden and a Overleese in their 7th leaf. The PA has flowered the last 3 years however the Overleese didn’t flower til last year and the few flowers it had dropped after the May frost we had last year. Finally this year the Overleese set a decent amount of flowers and I did some hand poli ating. The PA Golden is loaded with fruit but the Overleese is loosing all the fruitlets it set. It’s a little disappointing seeing the Overleese is probably the superior tasting fruit according to most account, but I’m so exited to try my first Pawpaw.

They adore N, compost, mulch and water. Deep and wide compost; deep and wide mulch. Yours should start to take off with those additions.

I’m trying not to get too hopeful, but it looks like my pawpaw may have self pollinated at least a couple of fruits!
This was the first time it flowered and while most of the flowers have fallen, there are about 4 clusters. ( it’s partner hasn’t set flowers yet.)
We are very top of their range so, if any real fruit set, I’ll have to have them finish ripening on the counter but it’s so exciting!!! 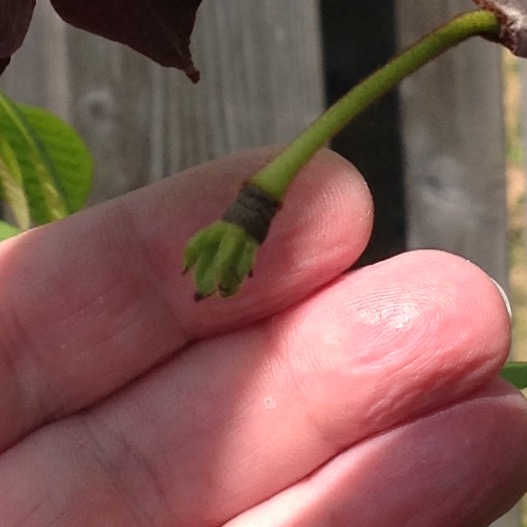 Nice Kelby! It took 8 years for my pawpaws to set fruit for me up here in Maine!