Maybe should be in the lounge, but it’s about Spring coming! We’re at almost 47degrees N latitude, so this is early.

We were late on our daily perambulation down by the river, or we might never have spotted our first robin of the year. Last year it was at least a couple of weeks later.

That’s a pretty good day’s sightings, we think. And Ma spotted them all first, so she gets the gold star.

At least here many robins migrate, but some stay all the time.
I don’t have the explanation handy.

Same with the geese here. Don’t know why.

Early last week I had about a dozen robins feasting in my yard here in STL. I didn’t know that meant anything related to spring time.

I think it’s a northern thing. Robins are migratory here and their return in the spring is often regarded as a harbinger.

I’m guessing it will be a minimum of 6 weeks before I see any robins at home.

a bald eagle (complete with fish in talons)

Mark, a couple years ago I saw the same thing! The eagle had a northern pike, a little one in it’s talons. What’s remarkable for my whole of 65 years I never seen an eagle in this area, yet I have for the past 5 years. A great sign we are on the right track. Also their never used to be walleye in the Detroit river, but now it’s teaming with them. Oxygen used to be too low for them. I’m on the St Clair river and we have walleyes too, but always have had them. Now though we have salmon, and muskie.
I have seen robins come early the last few years. They like to eat the choke cherries. About the only food source around.

Same with the geese here. Don’t know why.

Birds don’t migrate because of the cold, they migrate when the food source dries up. Here it’s when the lakes freeze over. One year we found hundreds of frozen ducks, very sad. Usually doesn’t happen something went terribly wrong for them.

@blueberry Robins actually only migrate a little south, so in most of their range you’ll see robins all winter that came from a few hundred miles north. They tend to hang out in swampy areas, but they’ll start showing up elsewhere around now.

With Canada geese, there is a migrant population and a resident population. Most of the migrants breed in the Arctic and migrate to the coasts and the Mississippi delta. The residents tend to only move far enough to find open water. Most of the geese you see locally in the summer are resident.

The first robins are a state of mind. You don’t see them until you are ready.

Typically I see some all months of the year…but you’re probably right that most migrate. It’s not uncommon to see a dozen in Feb that didn’t spend the coldest period here.

we have seen a huge return of birds of prey here in the last 20 yrs. most lakes i icefish, they are so used to getting fed they land on the ice 20-30ft. away, waiting to be fed. amazing how big they are many times the redtails and osprey fight with them for it. esp. in summer. usually, the b. eagle wins.

never see them here until at the earliest, mid april. if we get a late season snowstorm , ill put out a bowl of mealworms to help them out.

Large numbers of Robins get here about the same time the Blueberries get ripe. Robbins really like Blueberries. I have seen a 1000 Robbins eat an acre of Blueberries in less than a week.

Noticed a large flock of robins in my back yard, they stayed for a long time. The weather is in the mid 20s.

I’m up in the Catskill mountains New York state zone 5B we’re having a pretty chilly winter this whole week has been single digits and we have several nights below zero 9 in of snow on the ground and what did I see in the sumac Robbins I could not believe it at least four of them and those nasty European starlings stealing all their emergency food the robins held their own very strange. I used to make maple syrup and when we saw the robins we knew our season was coming to an end they seemed to come right on time, so this was strange for me I’ve never seen them resident over winter.

Here’s the range map from Cornell. American Robin Range Map, All About Birds, Cornell Lab of Ornithology
Everywhere it’s purple has robins year-round, so most of the lower 48. In the winter, they utilize different habitat types (mostly swamps) and tend to travel in larger flocks. You don’t see them as much in the winter because our yards are not where the food is, unless they’re taking advantage of something like winterberry or crabapples. 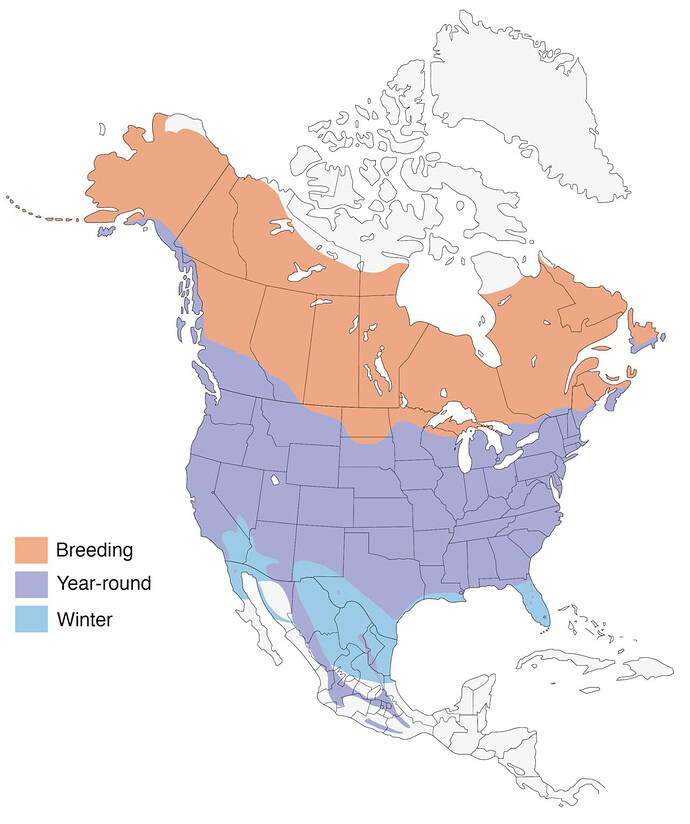 I can assure you, there are no robins here “year round”

we have gulls here year-round. dont know where they find much food or even open water.