Has anyone grown this thing? The spring pictures of this thing look stellar.

no but I grow six others. all genetic dwarf peaches have ridiculous blooms because of their tight node spacing. probably 10-50x as many flowers as you’d need for full set

Which dwarfs do you have?

still figuring these out, I’ve only had them one season. got a full set on most of them and good growth this year. arctic babe had pretty bad powdery mildew so that’s the only one on my possible cull list. el dorado was July 11 this year which is somewhat early, I liked that. empress was around sept 1, pretty late, which was also nice. the rest I have no notes for

Where did you get Golden Glory and Empress from? Those are older cultivars from L.E. Cooke.

a local grower in eugene called “eugene wholesale nursery” still grows them. I got them from a retailer in eugene

Flory is supposed to be a more reddish bloom than the others. Not deep a red, but redder. I was just looking around. It appears besides EL (which only sells a 7 gallon of Flory by freight), Portland Nursery close to you and @OregonEd might sell it. At least they did last year. The 2022 inventory is suppose to be up by the end of the month with tree/shrub/etc… arrival in April.

If either of you manage to head that way, lmk, I might be interested in buying one too. 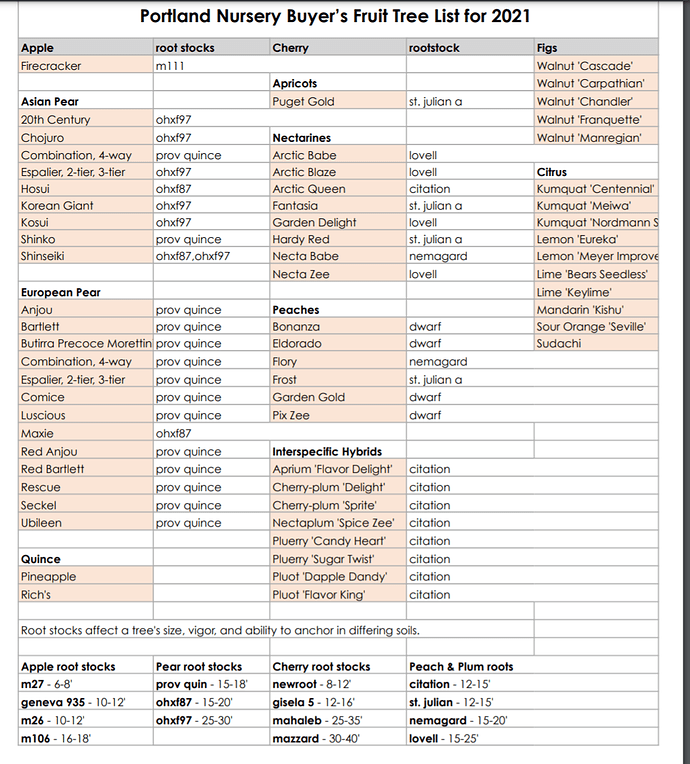 I want to say at least one of my six has pink blooms but I didn’t write that down. I could graft a lovell rootstock this summer and send it to you or a cutting

I have several of the dwarf peaches actually. I have been searching for Flory because it’s often considered one of if not the earliest known dwarf peach. Most dwarf peaches are descended from Flory. I considered an odd ball since it’s a white flesh peach plus it has deeper hue blossoms.

do you know Flory’s harvest time in terms of redhaven +/- days?

I mean earliest as in oldest. Natural Dwarf Fruit Trees Histories All other dwarf peaches and nectarines basically have Flory as ancestor. Even though its an older variety, it still seems of worth for some reason since Dave Wilson has it in its catalog and has blocks of it in their test plots.

Genetic dwarf peaches and nectarines began with the Flory Peach. (Note: We are now calling them “Natural Dwarfs” - to distance them from current “GMO” histeria.) In the summer of 1939 an United States Army engineer was in northern China. He found a small peach tree in a Chinese family’s yard and sampled some of the fruit. He obtained several peach pits which he brought to Modesto, California. This was a rare find as the Flory Peach pit basically comes true to the original tree. The flower was large double dark crimson color with white flesh fruit. The tree had a maximum height of 5 feet with long narrow leaves. The tree makes an attractive round shrub with dark green foliage.

I’m roughly guessing. Flory should ripen around same time as J.H. Hale, which is listed as +3 to Elberta, which is +28 to Redhaven if I remember correctly. So Flory should be +31ish. I know ripening should be a few days after Honey Babe.

Ok, if the flory peach grows true from seed, then who here has seeds available? I’d like to add this one to my collection as well.