Get your wife some chickens

My friend has Khaki Campbells that don’t quite reach that number, but they’re not too far off. They’re also pretty quiet and she lets them roam the garden (other than leafy greens and new seedlings) to reduce pests and weeds. If you can support a large enough population, you could breed them and keep your own flock going. That’s the dream for me, but not at my current location. I chose being able to walk to the store, bar, and library (and soon to work!) over a flock of ducks, I guess.

Clark, Our last batch of birds were Hyline Browns. An egg a day and very good feed/egg ratio. Produced right through -15F with a 4w LED in the coop. They lost their combs to frost but they regrew in the spring, tough, productive birds. They do wear out at about 2 years and almost stop laying.
If your chickens don’t lay in the winter, try putting a light in the coop overnight.
We found a fellow who broods chicks for the million+ bird chicken barns in northern Ia., and were able to buy leftover 17 week started pullets from him, $7.00 ea. delivered. 100 bird minimum.

the khaki campbell is one of the breeds used to make the hybrid 300. these are supposed to be even more friendly than the khakis and you can tell their sex as ducklings by their color.

Yeah, they should like good ducks. I guess to me the difference is similar to OP vs hybrid veggies. I like the idea of breeding the heirloom line rather than buying the hybrid. But don’t let that stop you, I’m just a guy with opinions and no ducks!

unless you have mallards / jungle fowl, all ducks/ chickens are hybrids.

I want to get a laying breed of ducks, but I don’t think they’re allowed where I am.

Get white ducks, dye them green and tell everyone they’re parrots.

These are the 7 best laying hens

Recall the information i posted a few posts ago
" ISA Brown (lay brown eggs); Dekalb Amberlink (lay brown eggs) and Shaver White (lay white eggs) " which were all recommendations. Not everyone agrees with my opinion and some other posts support my opinion

Remember white leghorn is an incredible chicken for food to egg consumption. They are frequently said to be the best but thats not entirely true. The hens are skiddish and the roosters are usually mean.

1 have 2 2yr old white leghorns that were given to me. both are fantastic layers of huge white eggs almost as big as my ducks. ones not that friendly but not jumpy and the other one is always under foot. jumps on the feed scoop when she’s hungry . i also have 4 isa browns i got last spring and are laying well. but its interesting how little the white leghorn eats for what she gives in return. many chicken forums say that leghorns are a warm weather chicken but other than a little frostbite on the tips of their combs, my 2 are just as hardy as the rest of the flock. they’ve endured -35f so far. i also have the brown leghorns and they don’t lay nearly as well as the whites do and a lot more flighty.

Funny you posted ‘Off Grid with Doug and Stacy’ they are on our winter watch list.

Jersey Giants”. From all I’ve seen and read, they seem to be the largest, FAIRLY common breed of chicken.

We have raised Jersey Black Giants. We tried them because of my dad’s story about them from his youth back in the Depression. He bought 50 JBGs at the same time Bertha, a girl living with the family, bought 50 leghorns. One day after the chickens were let out and the household was away for a day, a storm came up and blew the henhouse door shut. All the birds were stuck outside for hours. All but a few leghorns perished. Every JBG survived. My dad learned how to capon and fixed his cockerels. He then started to take orders for dressed capons for Thanksgiving and Christmas dinners. He got a second place ribbon to Bertha’s blue ribbon at the county fair, but he was told that she had got sympathy votes because the story of her losing so many birds to a freak storm had reached the judges. He delivered some of the dressed capons for Thanksgiving, and all went well until a week before Christmas, when someone broke into the henhouse one night and stole all his remaining JBGs. There might have been a dozen, but nobody heard a thing. When it comes to predators, the human kind are the worst.

As for my own experience, I first bought JBG hens from a large mail-order hatchery, but they didn’t seem any bigger than other hens. I then tried Sand Hill. The cocks were indeed big, magnificent birds, and not aggressive. I didn’t canonize [autocorrect for caponize] them, but by the time they were a good size to eat they weren’t of a tender age. We only fed ourselves with them, so we are much more tolerant of less tender, but much more flavorful chicken. I spared one for breeding purposes, but an undetermined, non-human predator got him before we could use his courage.

The JBG hens laid big, light-to-medium brown eggs, but not particularly plentifully. They were friendly. A couple years later, I had a hard time telling them apart from Australorps – hens that, contrary to some claims, were not especially productive either.

I was glad I raised them, and somewhere I even have a picture of my dad holding a JBG hen in his lap, but unless you have a good story, I don’t particularly recommend the breed.

Black Australorps have one overwhelmingly bad trait. There are often blood spots in the eggs. They may have set an egg laying record in Australia, but the birds I have owned were not up to snuff for total egg production as compared with a good Leghorn.

The same goes for the Maran’s, eggs often have large blood spots.

THank you so much for sharing your Jersey Giant stories! I have had mine for a couple years now, so I’ve had a lot more experience myself. First, mine sound a little like your first batch- they are large but not dramatically larger than any other chicken. But they appear in every way to be JG’s and they are at least some bigger than almost any other chickens I have seen. As a result, it has made a substantial difference in my loss rate to Hawks. Actually, a huge difference. All my chickens have always been free range and I would lose as many as 2-3 per week all year round with most breeds- especially white ones. I don’t think I’ve had a single adult GJ killed by hawks in the past year! That is a huge difference. Unfortunately the coyotes have recently discovered a love for chicken mean and have hit me a few times. They don’t come often but when they do they will take 3-4 at one night. Very frustrating.
The eggs from my Jersey Giants are just what I would call average in size. In other words, the eggs do not scale up with the size of the birds themselves. However, the eggs are all a beautiful brown color with none of the blood spots you speak of. In terms of production, I’d call it average or even a little below. I had one hen that laid every single day 12 months a year!!! So she alone raised my opinion of JG’s as egg layers. But most of them don’t lay every single day, and almost none of them lay with any sort of regularity in winter time. I’ve certainly had lots of mixed breed chickens that were better layers. All things considered, though, I’m a pretty big fan of Jersey Giants as survivors that lay enough eggs to keep me satisfied. WHile I do occasionally eat one, I can’t really say a lot about them as meat birds because all my chickens have always been free range chickens that mostly fend for themselves for food (in good weather) and as a result all my chickens tend to be pretty lean and not great eating. I almost always cook them in crock pots to help the meat be more tender.

Kevin, If you let your chickens free range, how do you keep
them out of your watermelon patch? Will they leave your melons
alone.

We fence our free-range chicken out, not in.

You are so lucky, we need to fence our’s in or we would have a drive thru diner for the predators.

I know this is an old thread, but you guys have gotten this city
boy interested in growing backyard chickens. This is a coop I just
purchased and am planning on building a covered 18 x 24 run for
about 8 chickens that will be mostly pets. Eggs are secondary. 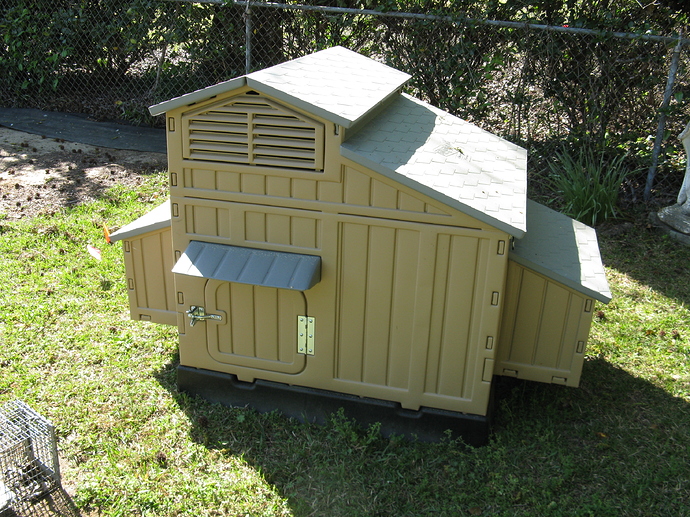